When Tales from Galaxy’s Edge (review here) dropped late last year, I was enamoured with the game as it truly felt like a more fleshed out adventure in the Star Wars universe, more so than Vader Immortal which felt more like a game/experience hybrid.  As a massive Star Wars fan, I forgave its shorter length and simple enemy AI and just enjoyed taking part in my own Star Wars adventure but once finished, I really wanted more.  Last Call is the 1st (and last) DLC pack for the game that not only continues the story of a droid repairman turned adventurer but also adds a few bonus missions and side quests that add significant content to the game. 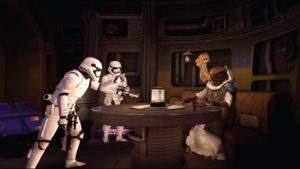 When the First order shows up, you know there’s trouble!

In order to play this DLC you need to have beaten the original campaign so if that saved game isn’t available, you need to play through the 1st game all over again.  I’m not going to go in depth with the controls as it plays identically to the 1st game save for the additional ‘tales’ that have you playing as an assassin droid along with continuing the Jedi adventures of Ady Sun’Zee that started in the Hidden Temple tale.  Seezelslak’s bar is still your hub, and, in this adventure, you run into an Ithorian looking for some artifacts on the planet of Batuu and with that simple mission, you are off and soon enough encounter those same pirates you faced in the 1st game.  Rest assured though, the game changes things up with new weapons, locations, enemies and allies making this feel like a whole new, fully fleshed out adventure.  The new campaign will take somewhere in the 3-hour range to complete with the additional tales adding close an hour of game plus the extra side-missions, if you don’t mind revisiting previously beaten areas.  Additional upgrades are also available including gloves that affect various weapon traits, modifiers for the guns you are holding and another upgrade to your jet pack that let’s you roam around and not just hover.  Bottom line here is while this is marketed as DLC, compared to the 1st game, this feels more like a sequel as it offers up just as much content as the 1st game and in some ways, delivers a more satisfying campaign thanks to the new encounters. 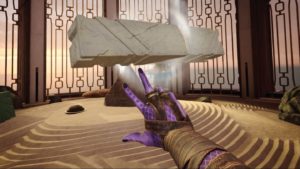 You still get to mess with Force powers in this one too!

Other than some lower resolution textures, the 1st game was a marvel for the quest headset with the 2nd looking even better thanks to grander set pieces and seemingly improved texture quality.  The initial 3rd of the game looks and feels the same as the 1st as you travel to a pirate’s base on Batuu though soon enough the game breaks away from the original having you navigate a large Jedi temple, a 1st Order facility and a few more locales that expand upon the Star Wars mythos.  Seezelslak and most of the friendly characters from part 1 are back though take a back seat to new arrivals like the impatient Ithorian Dok Ondar, mysterious Lens Kamo, the maniacal Baron Attsmun and many others with a special cameo from a Clone Wars and Rebels Alumni that I thoroughly enjoyed.  Set pieces seem larger as well and contain many moments where you’ll be navigating vertically with your jet pack and teleportation to scale certain sections giving that item much more use and feeling way less tacked on than in the 1st game.  Lighting effects are awesome, especially with a light Saber, and even the mission where you play as IG-88 mixes up the look of the game by changing how you see enemies as it navigates up through 80 floors (he skips a few, don’t worry) of a gang leaders hideout on Nar Shaddaa.  It was already a beautiful looking game and Last Call’s content not only improves upon that quality but might just make ‘Tales’ one of, if not, the best-looking game available for the Quest headsets.  Oh, and it wouldn’t be a Star Wars game without amazing audio design with Last Call continuing the excellent voice work, soundtrack and special effects that we expect from this franchise. 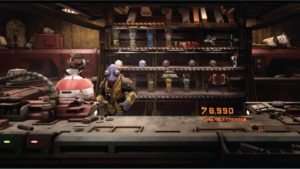 New items spice up the gameplay!

Despite how much I enjoyed Last Call, it still suffers from the same issues that plague the 1st Tales game, the first and foremost being the lack of a smooth turn option.  I don’t quite understand why ILMxLab is so against putting this in their VR titles as an option, but they don’t, and it sucks.  Enemy AI is also suspect as they can behave erratically, facing or running in the wrong direction or just standing in one spot unmoving, but I found their aggression to be increased as well as their shot accuracy causing me a few deaths and reminding me to take them a little more seriously. The new weapons and items spice things up a bit and with all the items returning from the 1st game, you have plenty of combat options including expanding your weapons holsters for some over the shoulder storage, which I greatly appreciated.  While the game failed to address most of my issues from the 1st game, those issues were minor at worst with the campaign in Last Call feeling more streamlined and cinematic. 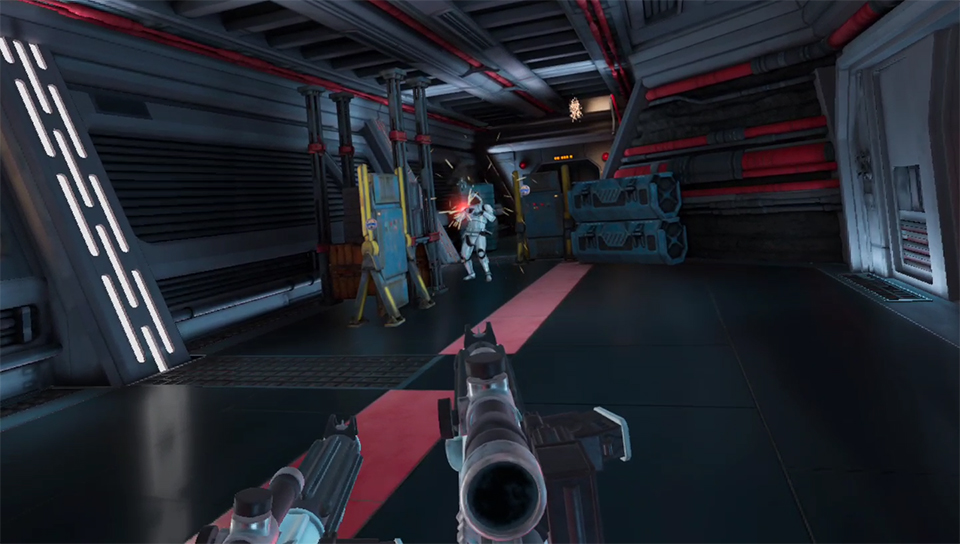 Last Call delivers a solid addition to Galaxy’s Edge, doubling the content and providing not only a whole new adventure, but 2 new smaller Tales that are a joy to play through.  If you enjoyed the original content, then this is a no brainer purchase and if you were on the fence with this game, Last Call adds a ton of value making the complete Tales from the Galaxy’s Edge package one of the biggest and best for the Quest headsets.

What would I pay?  If you already own Tales than Last Call’s content will cost you $10 US which is an absolute steal in my opinion.  If you don’t own the original than you can purchase the complete Galaxy’s Edge package for $35 which is a great price for what provides nearly 10 hours of Star Wars VR goodness!