Star Wars has had a fairly positive time in VR with showcase titles like Squadrons and the VAder Immortal series highlighting just how awesome being IN this universe can be.  ILMxLAB is back at it again with their largest title yet in Tales from The Galaxy’s Edge, which places you in the role of a courier who gets raided by pirates while en route to deliver some precious cargo.  Instead of just laying over and letting those pirates have their way, you jettison the cargo and fight them off before escaping to the nearby planet where your cargo should have crashed and so your adventure begins. 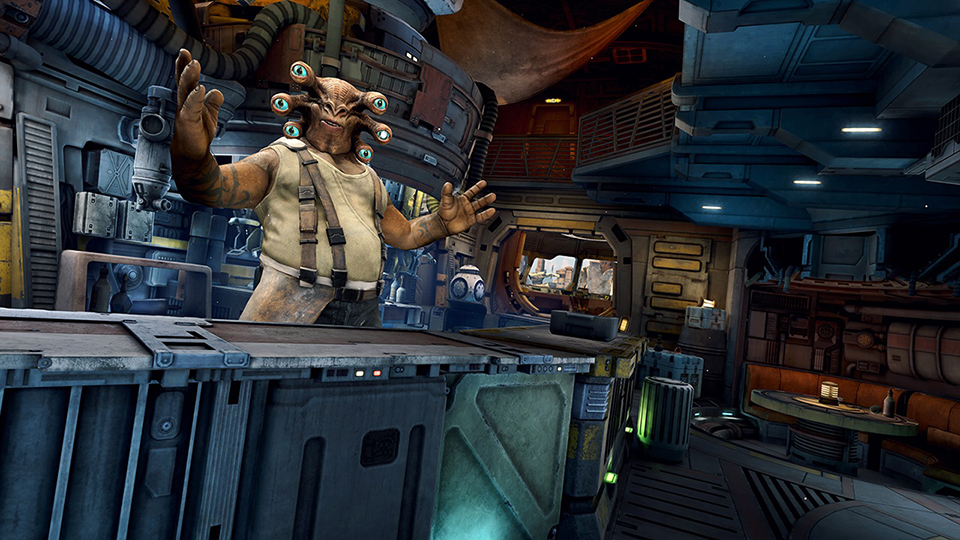 Those familiar with the Vader Immortal series will be instantly familiar with most of the controls in here save for a few game specific mechanics which I will get into in a bit.  You can play seated or standing and just like Vader Immortal, their is no option for smooth turning which is disappointing as we are over 4 years deep into this generation of VR and still battling with developers to include options for those that need comfort mods and those who don’t.  Regardless, unlike the Vader series, this plays much more like a traditional 1st person shooter as you navigate the surface of Batuu battling Space Pirates, droids & some of the local wildlife.  After the prologue mission you end up at Seezelslak bar where the bar owner gives your 1st quest to collect some items for his special brew.  On your chest is a handy little pocket where you can place any scrap pieces or items you find in their and to access your storage you grab at that pocket which brings up a quick menu with an arrow to show your entire inventory should you need to see more.  A hover pack helps you navigate the environment by raising you up a few feet and combat droids can assist you in taking out your foes.  Those little circular droids can be tossed into the air and depending upon their model will attack enemies in their own unique ways.  On your left hip is your pistol and your right has your heavier blaster (shotguns and rifles)  with the basic models having infinite ammo, provided you let them cool down or they will break and you’ll have to find a new one.  A multi-tool stored on your belt or in your inventory has 3 different functions and is used to unlock access panels and storage containers by removing welds, screws and accessing the electronics inside as well as repairing those combat droids and while you will run into these mini puzzles again and again, I quite enjoyed the variety of uses that tool employs, despite their simplistic nature.  You eventually unlock the droid repair bay which lets you spend your hard-earned credits on bacta sprays (health) and other weapons or you can customize your character a bit with different colored gloves.  The campaign can be played on 4 different difficulty settings and will take about 3 hours to complete and involve a fair bit cover-based shoot outs along the way. 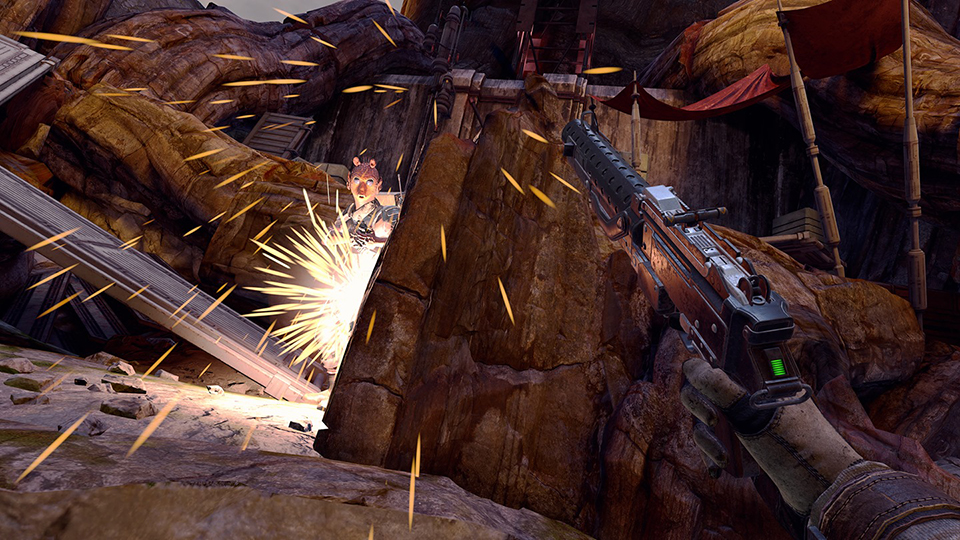 The gun fights are a blast!

The Quest 2 continues to impress with the Galaxy’s Edge looking phenomenal during some sections and while it’s nowhere near photo-realistic, the second the game started I instantly felt like I was in this galaxy far, far away.  From the opening moments on your ship to Seezelslak’s bar and the surface of Batuu, everything felt new, yet very familiar which is exactly what I want out of a Star Wars title.  Texture quality takes a hit, especially in the more open areas of Batuu but even with those lower quality visuals, I was fairly impressed by what I was looking at with the scale of some these sections being quite massive with an commendable draw distance that let me see everything happening around me. Minus the prologue, the entirety of the game takes place on the planets surface and will take you though some towering canyons, derelict ships and enemy encampments, changing up the settings a bit though the outdoor sections of the game did start to feel a little stale and repetitive after awhile. Character models on the other had look pretty damned good and while most of the foes you encounter don’t involve a lot of finer facial animations,  the friends you meet along the way do, and come in a fun variety and include some familiar faces.  It might not be the “best” looking Quest title, but it delivers the goods where it needs to and has more then a few impressive and charming moments.

I’ve said it before and I’ll say it again here, Star Wars games always nail the audio presentation thanks to the franchises 40 years of sound effects to fall back on.  There is some new music for this beyond the classic film soundtrack that gave me Mandalorian vibes, which I thought was a nice touch.  The 3D audio is fantastic with the noises of incoming attacks highlighting enemy locations.  The voice acting is also top notch with some slightly over-the-top performances from veteran voice-actors that fit wonderfully with the lighter comedic moments.  One of the games highlights is the return of some franchise favorite characters with their original voice actors, which as a hardcore fan of the original films, was an absolute treat. 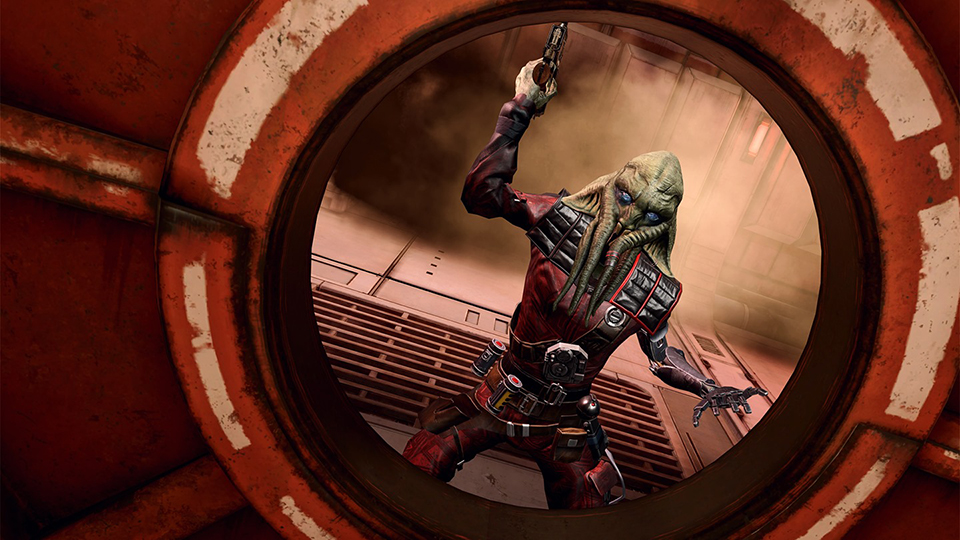 The leader of the space pirates in not one to mess with!

Galaxy’s Edge is the closest we have gotten to a fully fleshed out 1st person shooter in VR though it is short and did feel somewhat abrupt when I reached the campaigns conclusion.  I say somewhat as the enemy encounters were starting to get a little redundant and samey anyways, so the ending was also a little welcome.  Every encounter, excluding the final boss, is almost the same except for where enemies may be as there is some decent verticality in the stage design.  That verticality is somewhat hindered by the movement mechanics implemented as the only way to climb and drop to different levels is to use the teleport option, which definitely breaks immersion, especially when coupled with the hover pack, which can be used to dodge incoming blaster fire, but feels more like a crutch put in the game to ensure you can reach those heights.  I still enjoyed the combat and it felt true to the Star Wars universe with guns degrading or overheating if used too much and the story, while simple, was more than enough motivation to get me to the games conclusion.  You won’t see a ton of enemy types and the AI attached them is fairly easy to figure out so I recommend playing this on the harder difficulties as the easier ones really the make the game a breeze to get through.  Seezelslak offers you a mission early in the game so make sure you collect those items he asks for as this will unlock the 1st Tale that gives this game its name.  It’s a brief 20-minute adventure but does showcase a few mechanics not found in the game and was a nice little side note to the main campaign.  Their a promise of more of these Tales to come in future DLC though there is no ETA on their arrival or whether they will be free or paid for. 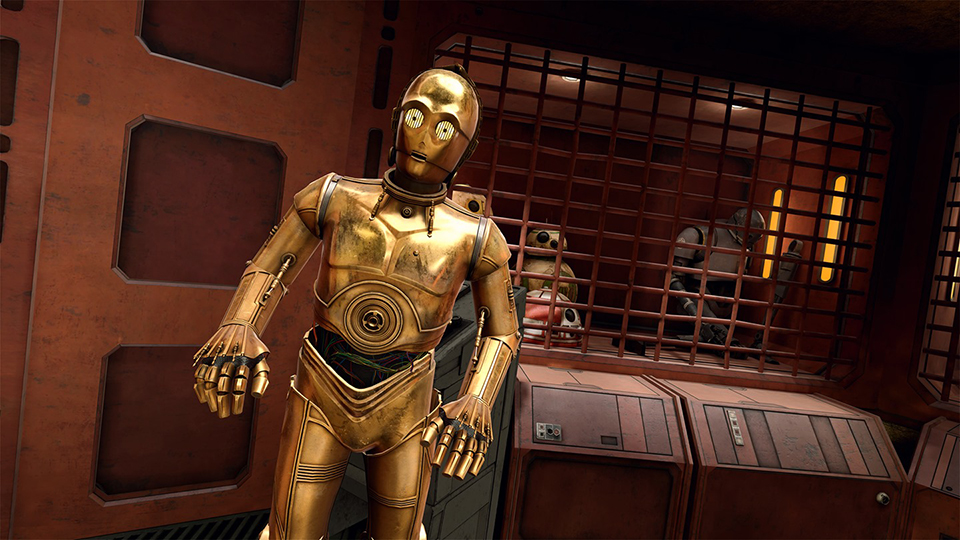 You’ll meet a few familiar faces on your adventures!

I enjoyed my time in this as it gave me similar vibes to playing Shadows of the Empire on the N64.  In no way does Tales reach the epic scale of that game, but I appreciated the light-hearted nature of the adventure and the characters I met along the way.  It feels like a step up from the Vader Immortal series and while I am impressed by how this looks and handles on the Quest, I would love to see ILMxLABS tackle a more ambitious Star Wars adventure for more powerful headsets.  With that said there is still a ton to like here with fans of the franchise getting a fair bit of fan service and even those unfamiliar with the Star Wars universe can still enjoy the solid gameplay and fun campaign.

What would I pay? This is $25 US which I think is a decent price for what’s here.  It’s a brief but fun adventure that feels true to the lighter side of Star Wars but has some satisfying combat and few distractions to play with in Seezelslak’s bar plus the promise of future DLC is also fairly enticing.