I’ve performed many “jobs” in VR, many of them from behind a counter or desk with few taking me into larger environments.  Traffic Jams looks to change that by placing you in a variety of city streets from around the world as you try and direct both traffic and pedestrians to safety.  Of course, nothing is ever as simple as it sounds and soon enough a wide array of obstacles will get in your way from getting those top scores and climbing the global leaderboards. 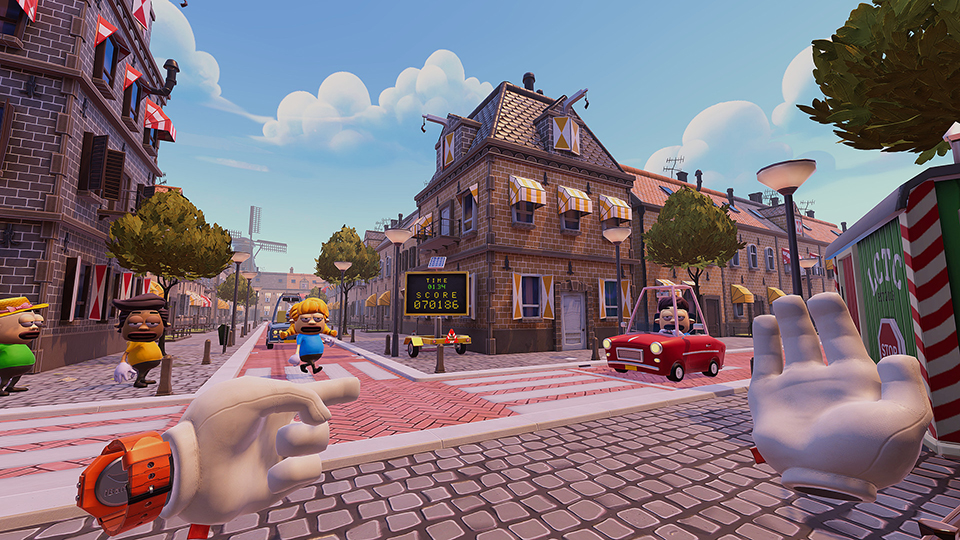 It starts off easy, but gets very hard.

A brief tutorial has your teacher, Dennis, explain the basics of traffic control which are extremely simple as you point at the person or vehicle you want to interact with and either wave them forward to speed them up or put up your hand in a stop motion to stop them.  To unlock the next stage, you need to complete objectives like getting higher scores, finding Dennis as he pops up a few times during a stage or any number of stage specific goals.  When the wackiness ensues, thing can get crazy.  You can only keep people still for so long as an annoyance meter slowly builds and when that happens, they will no longer listen to your instructions.  Some stages have large trams which slowly travel through the intersection hindering your efforts and you’ll have to contend with smog clouds that obscure your vision, a wasp attack, zombies and a few more surprises that may just be out of this world.  On your hand is a wristwatch that, when brought toward you, displays how to achieve each stages goals and with either hand you can perform specific hand gestures just for fun though it’s best to figure out the point motion as some tasks will require you to use that motion as the auto-point feature won’t trigger on optional targets. It’s a simple game, at least at first, with the difficulty of each stage getting only slightly harder, easing you into the harder stages and you’ll know when you have hit them as you’ll be causing crashes left and right as you try and keep track of everything happening around you. 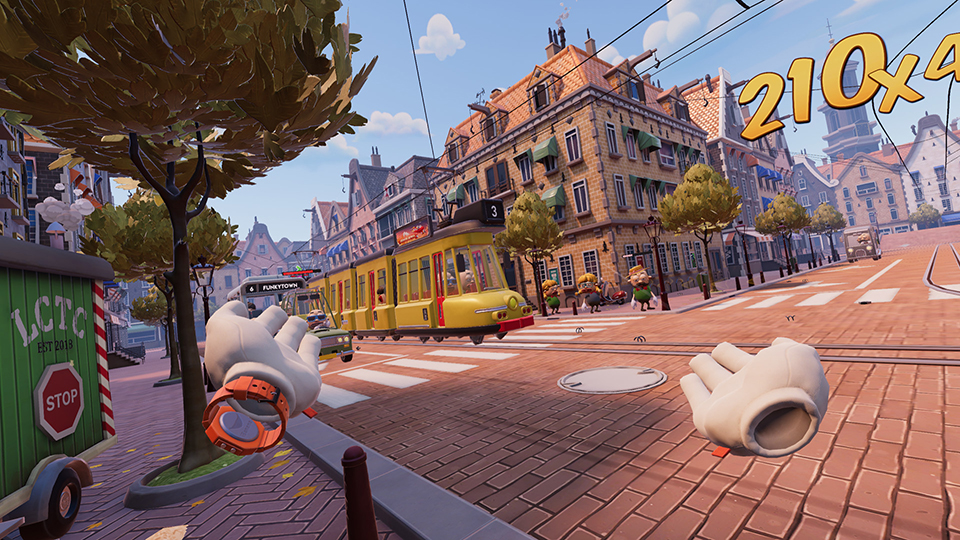 These tram cars are a pain in the ass.

It’s not all about you and, if you have some friends around, they can join in on the action via a mobile device by visiting this link in a browser and entering a 4-digit code assigned to that specific game.  This gives the VR player the same overall experience, but let’s up to 4 other players get in on the action by having a top-down view the street and give them the ability to spawn their own people, cars and obstacles and if they spawn enough small stuff, they can summon some of the bigger events found in the game.  It’s a nice way to include your friends on that action as they get to watch their VR friend contend with all the chaos thrown their way.

Everything in Traffic Jams is light-hearted and comedic.  Characters are little more than a series of shapes smooshed together and dressed up with a variety of costumes and… that works just great.  The first person you’ll meet is Dennis and for some reason I find his eccentric actions really funny as he puts off an ignorant smarmy charm that just works.  You’ll start off on a simple quiet 3-way stop with brick buildings, apartment and it all feels very small and quaint though each of the 5 stages gets successively larger and more complex.  There are some light shadow effects at play as well as day and night options, though for the most part everything looks fairly static save for what you are guiding and the obstacles that get in your way.  The color palette swaps also help ease that sense of repetition.   It comes off looking very simplistic, which is expected for a Quest game but everything in here works and animates well enough that I forgave its visuals shortcoming for the on-point gameplay which works near flawlessly. 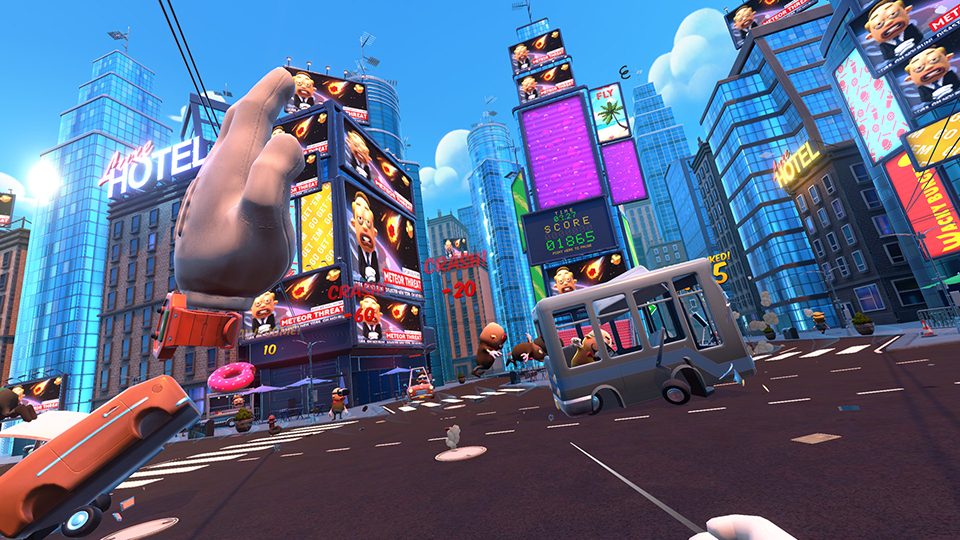 When traffic comes from all sides, things get tricky

The emphasis is on the action happening before you, so you’ll be more focused on audio prompts then the ambient music and the devs realized this as well and placed some quiet happy elevator tunes to accompany the chaos of any given stage.  3D audio is on point, and needed, as it can be all to easy to lose track of what is happening around you.  Vehicles will honk impatiently; people will groan in frustration if they are waiting too long, and those audio queues greatly help in keeping the traffic flowing.

Repetition is the name of the game here with each stage only getting more complicated and having a lot of goals, completionists will love the extra added challenge of those objectives.  Some of those objectives however can be incredibly obtuse, or rather they are simple, but the methods to go about them can be incredibly challenging or way worse, just confusing.  Tips during loading screens tell you some of the game’s mechanics, but not all of them.  Trying to stop a meteor is one such mission, but on the stage in question, smog would be blown in my face which takes time to clear and I could never clear it before that meteor crashed into the street.  Finding Dennis is easy enough, but the game never tells you how to do that or explains that your thumbsticks can make different hand gestures, which are needed to trigger that objective.  Some of this stuff, I figured out on my own but other tasks still elude me as of this writing causing frustration as I can’t unlock the final stage until I check off a few more boxes.  The only other issue getting in my way is the throwing mechanic as I just can’t seem to toss stuff with any accuracy forcing me to not bother with those challenges…at least not yet. 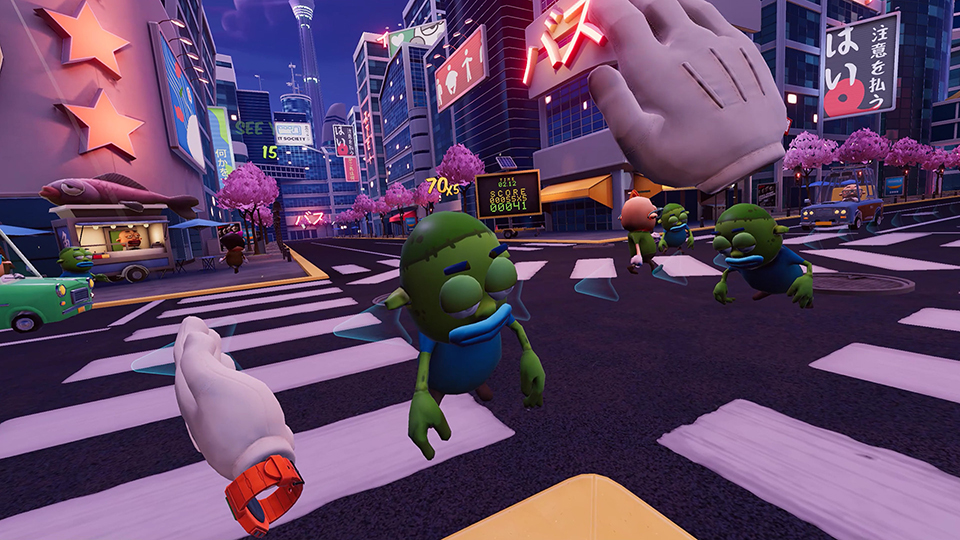 Zombies mess everything up!

I’m enjoying this more than I expected too and the extra stuff in here like handling zombies, finding Dennis and even the local multiplayer is a lot of fun…in smaller doses.  Despite the increasing difficulty, it is the same gameplay loop over and over and I did find myself turning the game off after a few stages, just so I wouldn’t get game fatigue.  For those job sim enthusiasts out there, this is something not only unique, but entertaining and a pretty good one to share with others too.

What would I pay? This is $20 US and for myself, that’s bit high.  It will take plenty of time to get through all the games content (I’m guessing at least 3 to 4 hours) but the repetition and frustration did get to me and when combined with the more simplistic visuals, just had me losing interest the more I played.