VRog has been out for for the GearVR, Wii U and the Rift for a some time and now gets the PSVR treatment.   It’s a pretty straightforward port, but bear in mind is that’s its more expensive on this headset than any other, while still the same game. 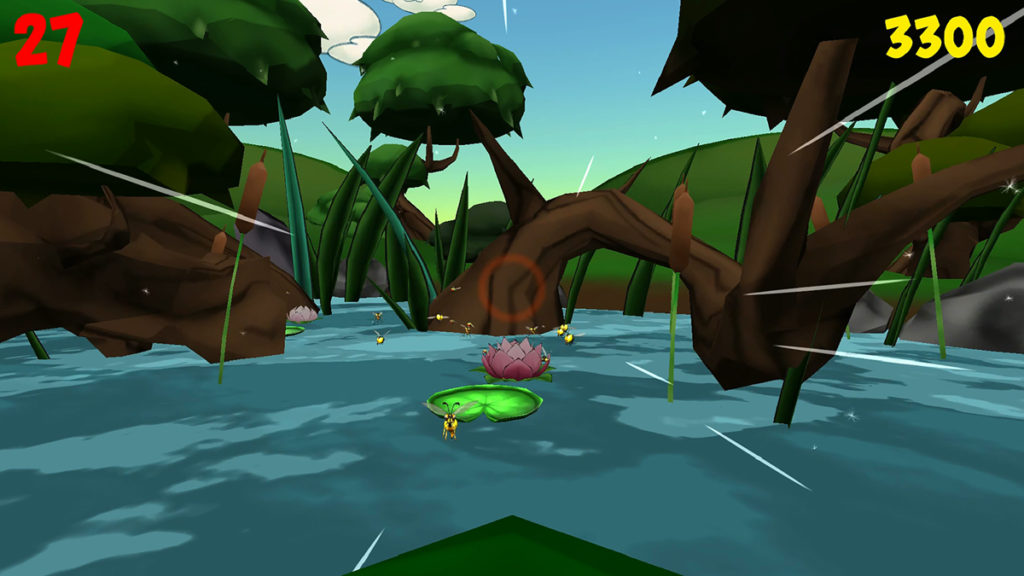 Leaping from pad to pad looks alright, but gets old fast

You are cast as a little green frog, and your main goal in life is to hop from lily pad to lily pad, chomping on various flying bugs, all the while avoiding being eaten yourself by the big bad stork. The games main menu gives you a brief introduction on how to play, through graphical representation, as well as detail the two different game modes, arcade and survival. In arcade, you basically have a set time limit of 90 seconds to rack up as many points as possible by eating the good bugs, avoiding the penalty bugs and building up combo scores, thereby achieving a high score to be added to the leaderboard. Survival, on the other hand, breaks the game up into stages, with each stage giving you a challenge of reaching a set number of points before you can advance to the next stage, albeit with an increased score target. No one said the life of a Frog is easy and so the added peril of the survival stages is the Stork. The games setting is that of a large pond and the Stork slowly meanders his way around the pond intent on making you his next meal. Besides snacking on bugs, you need to avoid the Stork by hopping around the lily pads while keeping a close eye on his whereabouts, ensuring he doesn’t sneak up on you. Find yourself beoming the Storks lunch and its game over!

The aforementioned bugs include ladybirds, mosquitos and wasps. Eat a mosquito and your score is increased, eat a wasp on the other hand and your targeting reticle goes momentarily haywire and is more difficult to control. At first, I thought I was having camera tracking issues as my headset was not corresponding until I then realised why. Chomping down on a ladybird will also improve your night vision while certain other dragonflies will slow down the action and assist in targeting your prey. 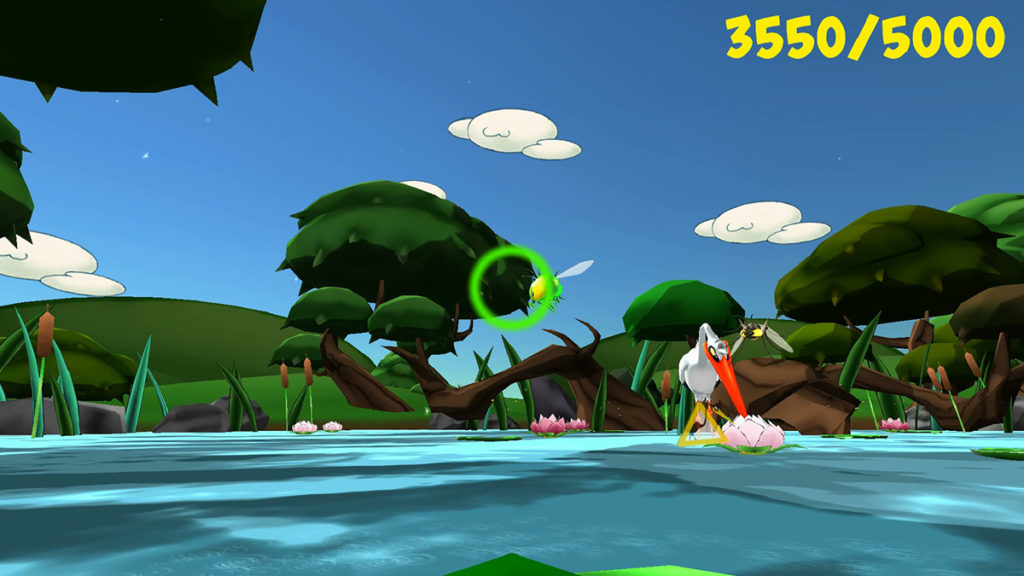 Stay on target…stay in target!

VRog does away with any controller types and all the action is controlled through just the use of the VR headset, and where you happen to be looking. Selection options and in game actions are indicated by a circular icon. Move your head, stare at a lily pad or a bug, wait for the icon to fill up and you will either jump over to that pad or unleash your long tongue at the unsuspecting bugs. Besides utilising the lily pads to get around you will also come across a friendly turtle and be able to hop onto his back to take you around the lake. The bugs are all around the environment, so more often than not, you will find yourself having to turn right around or look straight up. Due to this constant moving, its recommended to either play from a standing point of view or sitting on a swivel chair. The gameplay is simple, but this also makes for a more intuitive and realistic experience.

The visuals take on a cartoony look which is well animated, with the action taking place on just one location, the pond. The graphics are bold and cartoony and creates a good art theme but there just isn’t enough. Within a few minutes of play you will have seen everything VRog has to offer visual wise. More locations, maybe ponds around the world, would have added greatly to its appeal but as it stands, boredom setting in quickly. Not to say that’s is not any fun, it is… for about 10 minutes, until the repetitious nature and lack of challenge raises their ugly heads. It is also a game which aims itself very squarely at young children particularly under the ages of 12 and since using VR for that age group is not recommended, it’s hard to imagine a demographic that will get anything from this title. It’s the VR equivalent of a Duck Hunt game, with the added suspense of avoiding the Stork as he makes his way towards you and looms overhead. It is fun to a degree if you go into it with low expectations don’t overstay your welcome. 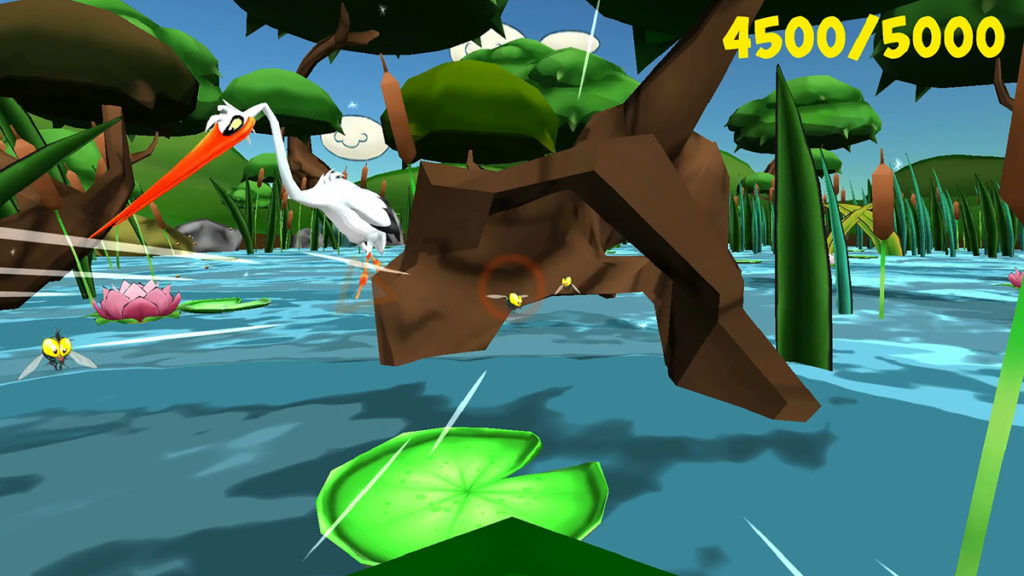 Watch out for that stork or that’s it for you!

Again, the audio is nothing really to write home about, functional bug noises and squelching effects coupled with a standard background music makes it all quite forgettable.

It’s very much a pick up and play for ten minutes game before moving on to something more substantial. Arcade mode is too short lived and, other than competing with friends for a high score, is pretty much redundant. The survival stages on the other hand add nothing as you progress through them. The only significant difference being is a higher challenge score to meet. Additional bugs, a variety of scenes, gameplay tweaks and added features would have been more greatly welcomed…..

…….But as Kermit, that famous frog once said, it’s not easy being green!

What would I Pay? At £6.49 it’s more expensive than the other formats it’s available for and  overpriced considering its limited play appeal, simplistic gameplay and lack of features. It’s not a huge difference but I would be more happy paying the £3-4 mark.