Well, if you have been wondering “WHERE”S MAH DAMNED PING PONG GAME IN VR?!” than you’re in luck.  Originally released for the HTC Vive, this is a decent simulation of the popular sport with a few key issues hampering the overall experience. 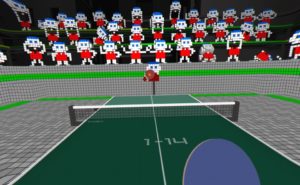 It’s time to get your game on…and probably lose.

The controls are simple enough utilizing Move controller(s) to simply swat at the ball.  A light touch is key as I found myself more often than not putting way too much power behind my shots and missing the table.  An option for dual paddles is available, though I found that to be more difficult than just the singular paddle.

The visuals are in no way amazing, but they do the job.  The characters around  you are blocky little dudes that contain some funny little animations, but you will quickly forget their existence.  Your opponent is much less animated with his arm extending or retracting to hit the ball being the only real animation.  His paddle is always facing your way and detracts from the fun a bit.  Everything here looks polished and clean and makes for an enjoyable, albeit brief experience.   The audio is the same with a mundane soundtracks and sound effects that match the action.  Nothing crazy going on here, but the audio and visuals do the job.

I think the dev here sort of nailed ping pong physics.  I say that because I am just as terrible in this game as I am in real life.  Requiring that perfect, light touch is not something I am great at and I often missed the table costing me valuable points.  I mean, it feels like ping pong so that works.  A few different modes are available on top of a standard game.  Practice and a tournament are here for those that like extended play times.  Arcade features a few modified game modes that mix things up a bit, but in no way change the game.

You can bounce your ball against a wall (just as fun as it sounds), or try and hit a ball in a goal at the opposite end of the table.  A similar option has you aiming for a moving target where the opposing player would be or precisely trying to paddle your ball at specific points on the table.  The most interesting option was a game that had sections of the table disappearing whenever the ball touched it.  These matches there are predictably short but fun to watch for a few minutes. All those modes work as they should, you’ll just be fighting with the controls to beat any of them.  The last mode requires you to hit the ball on specifically marked sections of the table. I never actually played this mode because every time I loaded it up, the game crashed, but I’m sure it’s just more of the same anyways. 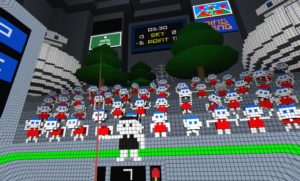 I really had nothing else to post here, so I took a picture of the crowd

The biggest crime committed here is the lack of multiplayer.  This title has its shortcomings for sure, but a multiplayer mode could have saved this game and turned it into something worth coming back too.   Instead you get to deal with frustrating controls that don’t seem to always read how much power you are putting behind your shots.  Occasionally a light touch would send my ball careening off the table while other times a powerful hit had the ball barely clearing the net.  For the most part I found the controls worked, but when they didn’t it became infuriating.

Ultimately this is a shallow, single player experience.  With no multiplayer, playing against the AI just gets old fast and while the additional modes mix up the gameplay a bit, ultimately your still just playing ping pong and unless you live for ping pong, it wears out its welcome quick.

What would I pay? This is a $5 title at the most.  After 5 or 10 minutes you’ll just tired of this and the other modes barely help that situation…go buy Holoball instead, it’s way more fun.