Ever since Zen released their 1st VR Pinball game, Pinball FX2 and its subsequent DLC, players have been asking for more tables, which is fair as outside of VR, it seems like every other week a new table was being released on one platform or another.  Now, just over 4 years after FX2 got the VR treatment do we get FX3, or rather we get a bunch of the Star Wars tables released for Pinball FX3 including 2 new tables, a host of collectibles and other VR goodies. 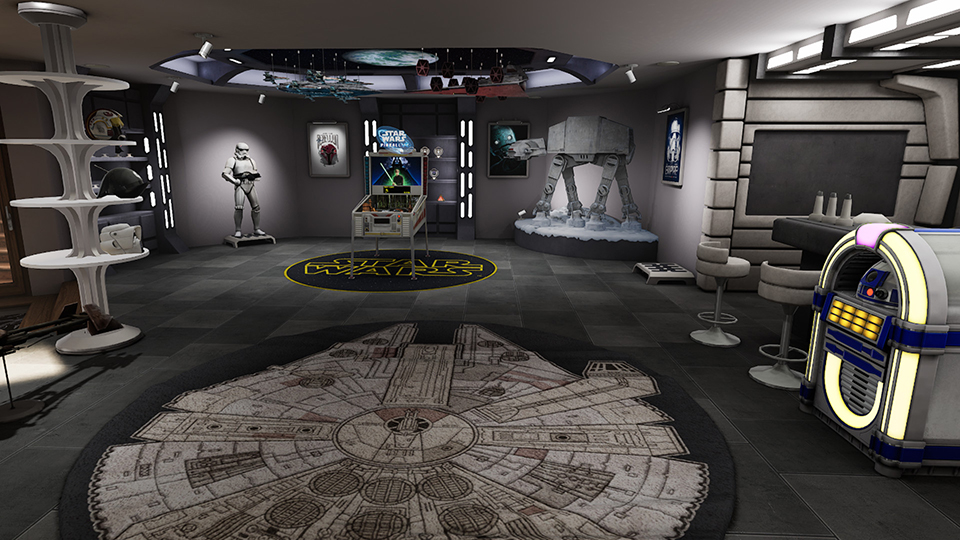 This is a pinball game so the controls here are pretty basic as you just use your right and left triggers to control the right and left paddles with some choice table option requiring a face button to select.  You have a couple options of play; the 1st is simply choosing a table and picking from tournament or arcade mode and seeing how far up the leader boards you can get with the former mode being much more simulation and the latter having more bonus stuff happening including force modifiers.   The 3rd option is career mode which will have you perform specific tasks on any of the 8 tables in the game.   These could be as simple as hitting certain scores within a certain time or playing solely with multi-balls or being limited in the number of balls you get.   With this being VR though, it’s more than just pinball and includes a few mini games like a speeder run, lightsaber duel or flamethrower game and while these are very simplified versions of what you might expect from those descriptions, they do add some nice little VR flare beyond just tapping paddles but are relegated to simply looking where you want to aim or button presses for lightsaber action which can be cumbersome until you play a few times.  Once you unlock a character or 2, multi-ball and duelling multi-ball options will light up on the tables for some added chaos with the former mode balancing 2 balls in unique ways.  Also available is the “Fan Cave” which is your Star Wars themed game room where you can display all the collectibles you have unlocked during your play as well as a leaderboard screen and Tv where you can select the games locomotion and comfort options when navigating the room. 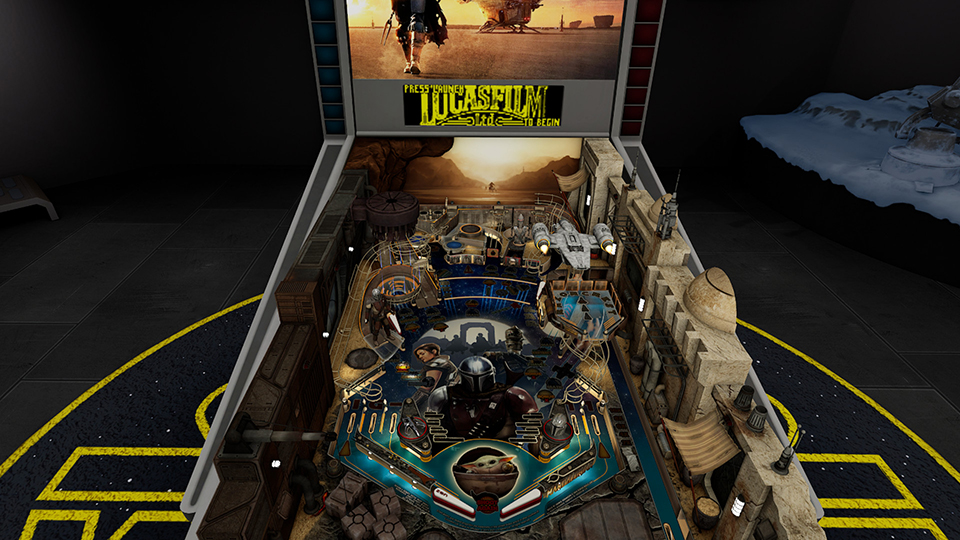 One of the new tables…this is the way.

Just like Pinball FX 2, the pinball tables from the flat side of things have been ported over wonderfully into VR and include background distractions as well like droids that move past your tables, a nearby dark Jedi who tries to intimidate you or just some errant ships that fly past you in the middle of a game.  It’s those extra bits that add a ton of fantasy and fan service to the game as not only are many of the crazier moments on the table just not possible on real machines, or even on flat screens, they just don’t have the depth that VR offers, allowing you to lean in close to check out all the finer details.  The 8 tables are built around the original trilogy, Rogue One, The Mandalorian, Rebels with the final 2 centred around the Jedi and Star Wars figurines of all things.  Sorry sequel trilogy fans, nothing here for you…thankfully.    Each one looks great with some being a little busier than others, but no matter which one you play on, they each offer their own nuances that make them feel a bit different from the others. Total Immersion is a fun addition that lets you view the pinball action from inside the machine itself giving you an ant sized view of the machine, which is cool, but I don’t think score chasers will play much in this mode as it’s incredibly hard to keep track of the ball. The Fan Cave looks pretty slick too, once you unlock some decorations, and it’s fun to mess around with statues of main characters, posters and other props that make the overall spectacle here a fun one. 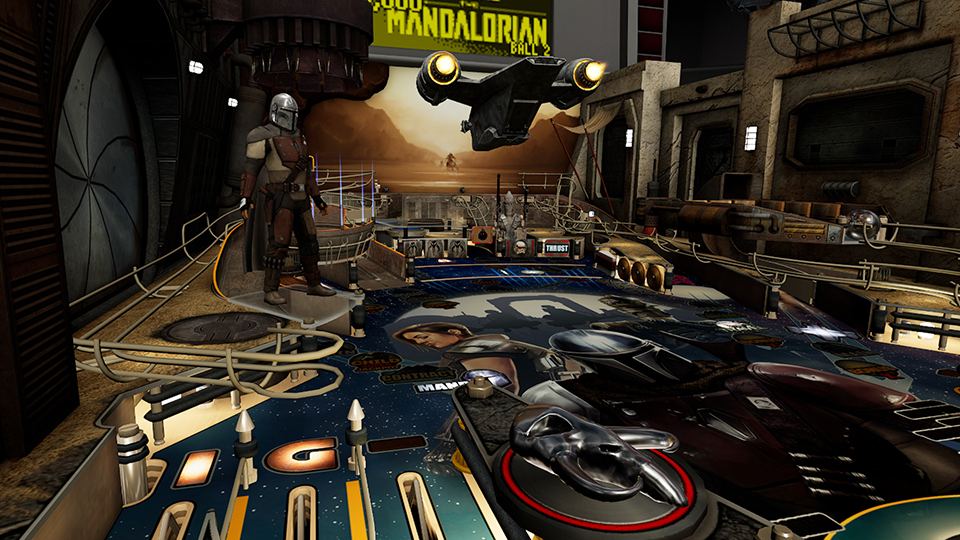 In VR you can view the action from inside the table.

One thing you can always say about any Star Wars game is the that the audio is typically on point thanks to the licensed sound effects and soundtrack.  Some of the sound bytes for the characters can be a tad rough thanks to them not being the original actors, but this is also stock for these franchise offshoot titles and they still get the job done.  The beeps, boops, whirls and other effects all sound fantastic with all machines constantly bombarding you with some kinds of effect as you rack up points.  There is a Cantina Jukebox which features many of the John Williams Star Wars classic songs we know and love so you can enjoy those tunes while playing.

So where does Star Wars Pinball fail? Nowhere really?  Sure, you could ask for more tables but with 8 tables included with the base game including 2 new ones, there is plenty of content to get through, especially if you are trying to unlock all the collectibles or just get high scores.  Initial runs may be over quick, but once I figured out a table’s nuances, games lasted much longer taking upwards of 20 minutes or more before my reaction skills tapped out.  Pinball in VR is one of the easiest real word “things” you can put in VR and I honestly would have been happy with a small room and the tables given.   Career mode is a bonus for those who don’t want to commit hours to getting good and the motivation to unlock all those goodies to customize your Star Wars fan cave is a strong one.  Bottom line here is there really isn’t much to complain about except if you haven’t cared for Pinball in VR before as this does little beyond giving us more tables to mess around with. 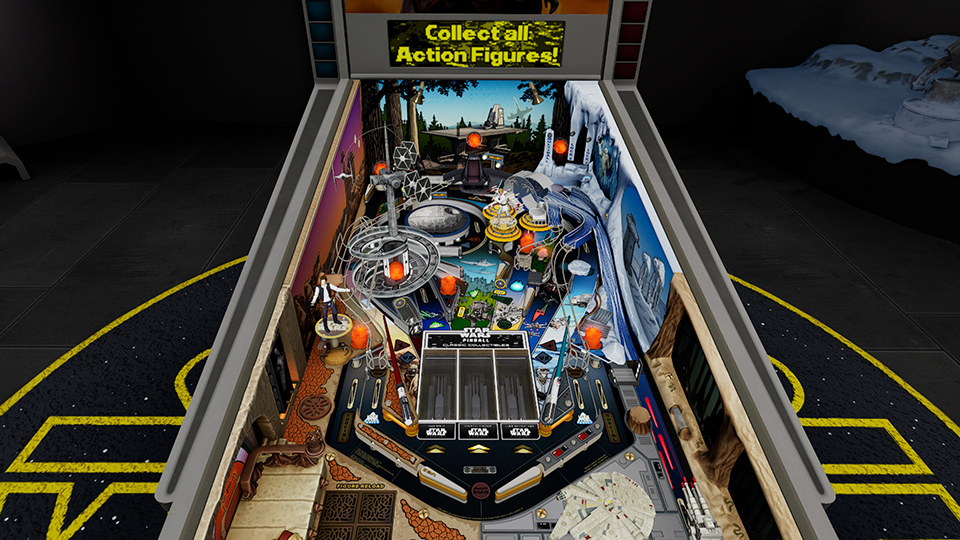 Each table offers its own unique designs.

What would I pay? $30US is totally fine for this!  That puts this at less than $4 per table PLUS all the other content.  Leaderboard chasers will spend hours in here giving this game a fair bit of bang for your buck and even casual gamers have a lot to mess around with.

Zen Studios provided The VR Grid with a press code for this title and, regardless of this review, we thank them for that!