So, what exactly is The Curious Tale of the Stolen Pets? Well, at it’s core it’s a find ’em type game where you are placed before a small animated diorama and must find said stolen pets in ‘Where’s Waldo’ type fashion (is that still a valid reference?). It’s more then just that with an overarching story about family and just how we treat one another as told by your in-game grandfather. 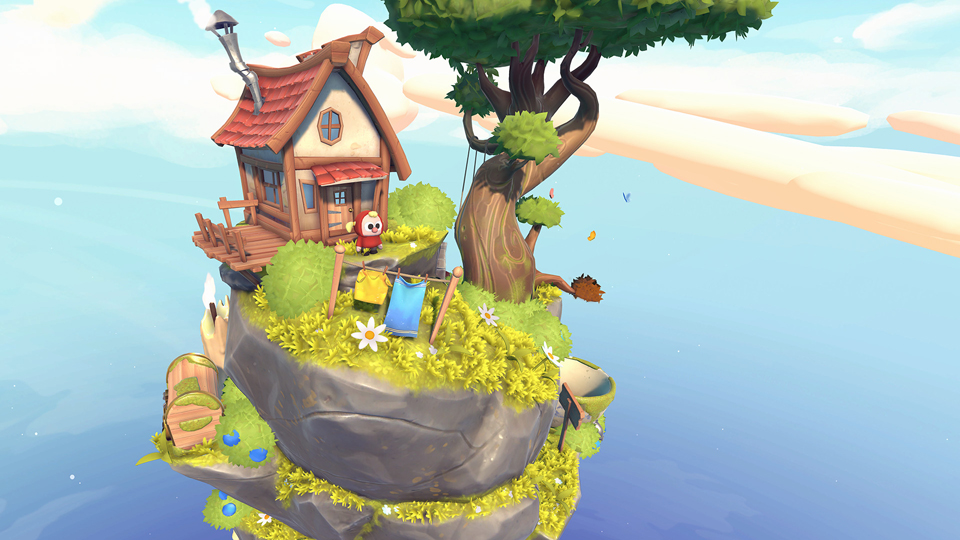 Each stage may be small, but they are all bustling with life.

Like I said, each stage is a small diorama, a microcosm of a memory represented by a floating island before you which you can rotate by dragging with your hands, thumb sticks or button presses if you are playing on the PSVR headset. The 1st level acts as a tutorial with finding these stolen pets being a little more complicated then just paying attention. Each pet may be hidden behind obstacles that need be triggered or discovered by other means presented in the stage. For instance, the opening stage requires you to press 3 buttons hidden throughout the island to open a chest containing said pet. Another may require you to melt them out of ice or somehow bypass a dangerous plant, preventing you from getting anywhere near the cute little animal. Each of the 5 stages has unique puzzles to solve making each one feel fresh. The puzzles are laid out in a sort of order to follow, though each stage does offer paths to find the animals in any order you wish. Each stage typically has 5 animals to find as well as coins hidden throughout each world ensuring there is plenty of stuff to look for as you scour each island in search of solutions. Each stage is broken up by your grandfather’s talk as he bemoans your relationship with your sister which has been severed by past events as represented in each stage, adding a wonderful sense of grounded and realistic emotion to what would otherwise be a simple and childlike game. 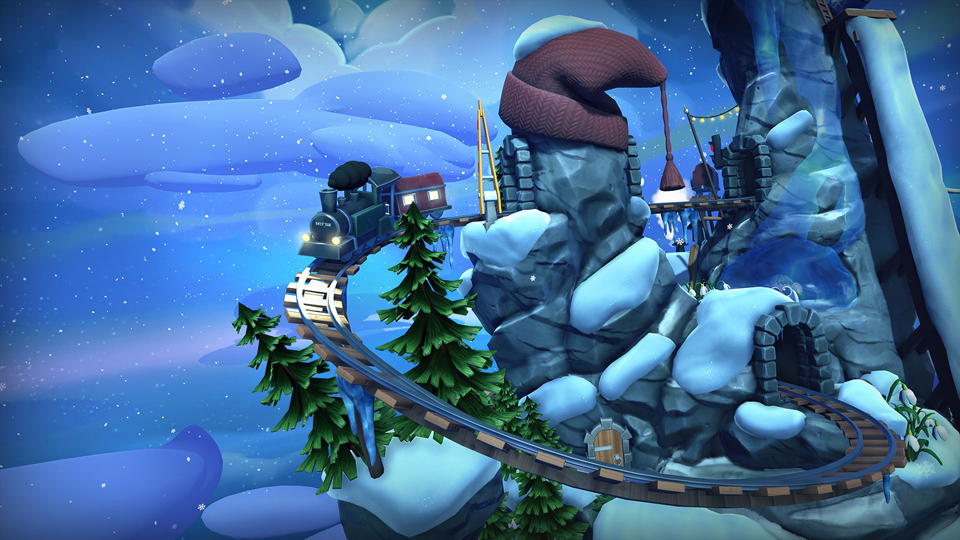 I love the toque on the cliff top.

Every stage is bursting with character and life thanks to the cartoonish visuals and polish packed into the game. Each level carries a theme unto its own from a wintery wonderland, Summerside house and even a prehistoric setting, each brimming with activity and vitality. Every level sees a character, typically your grandfather, running around it in an almost Lego-like fashion, interacting with whatever he comes across. A miniature train may be driving around the stage while a little cabin on a hill blows puffs of smoke, a volcano may be on the verge of eruption or a nearby submarine may search the watery depths of an island helping you in your efforts. The stages feel so alive and so well thought out with tons of micro interactions present in just about everything you can touch. Moving an item may reveal a pet or clue to the next pet with some level specific items being used to solve other puzzles, or maybe nothing besides just being able to knock blueberries out of trees or sprinkle a fresh layer of snow, adding a significant level of depth that many games lack and even though those interactions serve almost no purpose to the game, they bridge that gap between making this just another VR game, to making this something a little more special.

The games levels are broken up by your grandfather as he takes you on a journey through time via memories which he brings up, all centering around you and your sister. It’s a slightly heavy story though by no means does it reach Ghost Giant levels of seriousness, though I suspect will resound with many of us when it comes to our familial relations. Stolen Pets never goes out of its way to preach a solution to the issues brought up but does suggest strongly throughout it’s narrative that some things maybe just aren’t worth fighting over. Besides the story, the actual stages are friendly and simple with each element, whether it be a pet, dropped watermelon or little character all bustling with life and of course you can touch just about anything you can see more often then not eliciting some sort of reaction or sound. 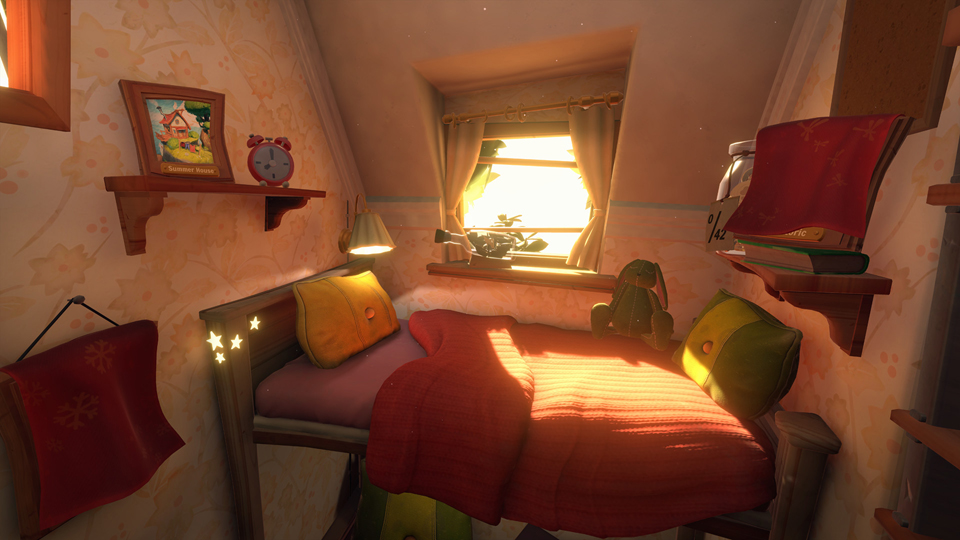 Your bedroom is the narrative hub between worlds

The Curious Tale of the Stolen Pets took me just over an hour to beat and that includes finding all the coins, which unfortunately doesn’t reward you with anything special other than an excuse to stay in each stage a little longer. Even if you were to struggle on a few stages, which I did, I suspect this won’t take more than an hour and half to wrap with no reason to return. I’m not saying that’s a bad thing as replayability doesn’t always have to be a factor in every games score and I really enjoyed what was presented here. Each stage feels like a mini-world and from start to finish, I couldn’t help but marvel at just how much polish this game has. Even when I got stuck on a couple of puzzles, when I found the solution, it made so much sense that I just felt dumb for not seeing it sooner as the game put all the clues I needed right in my face. I’d say this is an experience geared much more towards children than adults, but I’ll be damned if I didn’t enjoy every moment of the game. In fact, I do wish there was more reason to stay in each stage as finding the pets and coins is the only motivation to stay there and I really wish there were more discoveries to find. I don’t mean to harp on the game to negatively as what’s here really is great, but it was just over so fast that I just wanted more. 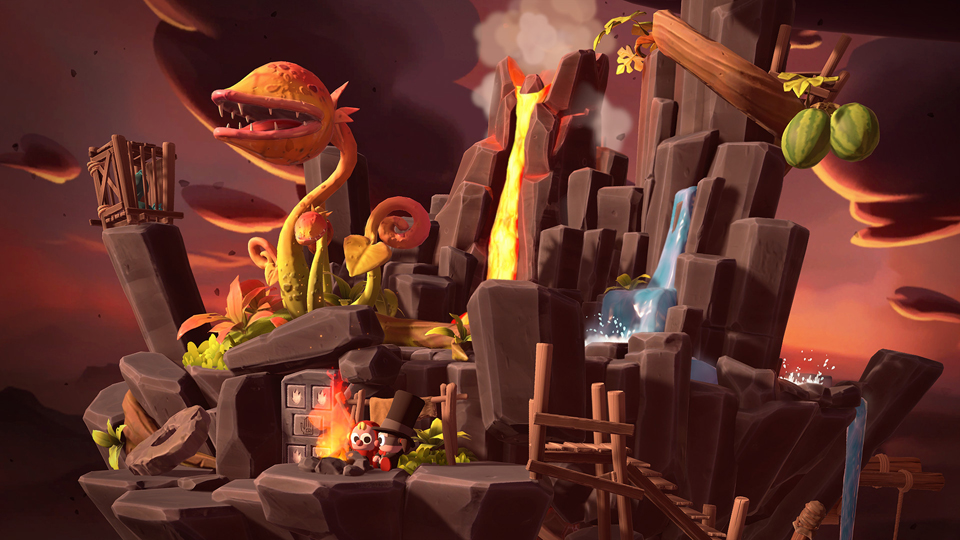 Not gonna lie, this sage held me up for a bit.

This game won’t be for everybody, but I think everyone should play it.  It’s a fun use of VR that isn’t really 1st person and its childish presentation really did pull something out of me that may have been dormant.  This is not the kind of game I would choose to play, but I’m so glad I did as it’s simple fun, rooted in emotion and presented in such a friendly way that I can’t deny how charmed I was by the whole experience.  If you’re in the mood for a more casual and friendly experience, possibly tapping into some childhood memories, then I highly recommend this as a palette cleanser and break from the kind of VR experiences we typically get.

What would I pay?  I am totally fine with the $15 price tag on this.  It may be on the shorter side, but the level of polish and charm here is something we just don’t get enough of in VR.  Whether you’re a fan of shooters, RPG’s, MOBA’s or whatever, if you have a VR headset, I say this is worth picking up as it’s just a little slice of joy that I bet you’ll fall in love with.