Alright everyone, strap on that flight suit, it’s time to go for a ride!  Hearkening back to games so old I’m scared to reference them for fear of being ostrascized(and I’m not even that old!) is a sci-fi themed “space” shooter that tasks you with venturing deeper and deeper underground in search of well…anything really.  Be prepared to have fun, feel some nostalgia and drive yourself insane.

The DS4 is the only control method utilized, and for good reason.  With 6 DOF you need very button available to navigate the environment.  It’s worth noting that as of this review, HOTAS is not supported.  Upon start up it may be in your best interest to dumb down the sensitivity a bit as I found it to be a little insane at default.  This play very like the recently released Starblood Arena, only this time it’s a single player campaign only.  You are armed with an assortment of weapons; missiles, machine guns and lasers, which are upgradeable as are other components of your ship.  The controls can definitely feel floaty and will take time to get used to, especially when trying to recover from collisions or navigate a map while driving in reverse, but overall, they are pretty solid and by my second playthrough I could cruise through levels like an ace pilot. 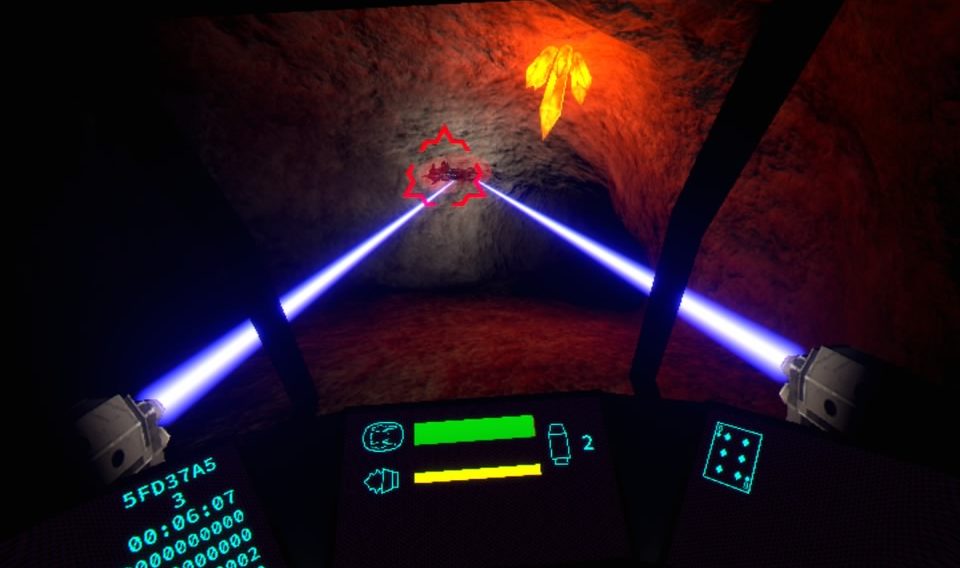 Range is your friend, use it as much as you can…and shoot those gem formations while your at it.

The plot is minimal; you wake up in your ship with no memory of why you are there or much else and are tasked with navigating what appears to be procedurally generated maps.  To move on to the next stage you need to find the teleporter on the level that lets you do so.  Scattered around each stage are enemy ships that hide around corners or appear in plain site so you need to keep your eyes open or risk taking damage, which can be hard to recover from.  Also in each stage is a ship power-up, or in some cases a power-down, which you will need if you have any hope of completing this game…and this is where the review takes a turn.

Initially I scoffed at the enemy AI which may be some of the most basic I have ever seen.  By staying out of turret range, you can simply pick them off without any retaliation.  Even drones act the same, only flying directly toward you to get in range of their attacks.  However, each stage adds a higher number of enemies than the last and they also carry at least more health, and may dole out more damage as well.  What this means is that enemies that were dispatched with ease early on now take a tonne more shots to destroy, giving them more time to get close and fight back.  The AI is easily exploitable, with range being your biggest ally, and even placing terrain in between you and them results in some laughable collisions between the drones and the environment.  So, while the enemy acts very predictable, every levels upgrade make them a very serious threat as the game progresses.

Power ups come in the form of playing cards and are change every playthrough so while you often get upgrades to weapons or other components of your ship, occasionally you may get a card that removes your location from a map or something else that slightly hurts your cause.  That’s my second big problem with the game; depending upon what upgrades you get, your efforts may be doomed before you even start.  Some of my runs went great with upgrades to shields and weapons while other had upgrades to sensors or other ship elements that seem to have no bearing on the gameplay.  Full disclosure here, I have yet to get past stage 9 with the end coming around stage 11(or so).  By that math, a complete run should take around 2 to 3 hours.  Did I mention that you only get 1 life and death results in a restart.  You have the option of playing through the same run again by entering your previous ships display code or start a new run and pray that luck is on your side 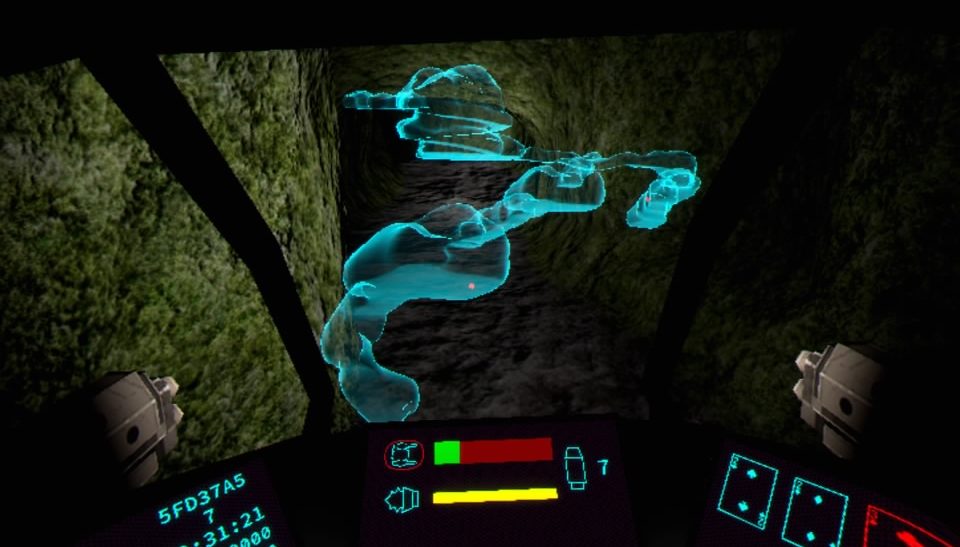 As caverns start to blend together you’ll be checking your map often just to get your bearings.

I should state that I love what was presented here, especially considering this was made by one man.  However, the randomness of the power-ups is frustrating, and with only 1 per stage, it seemed like even on my best run I was doomed to fail.  By stage 8 my weapons felt like pea shooter taking waaaaay to long to kill enemies and allowing them to chip away at my health.  While destroyed enemies offer up the ocasional small health bonuses and missile ammo, this also seems to be random with latter levels just not offering up enough of either to keep up with the games difficulty.  At the beginning, I was cruising through levels as fast as I could and dispatching drones like it was going out of style.  Around stage 6(and on) I was playing like a fearful rabbit, scared at what was to come around every corner.  Levels, while seemingly random, are comprised of smaller sections which repeat throughout multiple runs.  This is both good and bad as you begin to memorize the likely locations of enemies upon entering these “rooms” giving you a much-needed advantage.  At the same time levels start to feel the same and lose their mystery when you’re just like ‘oh this place again’ and navigate as you have done many times over.

These cavernous wastes look pretty good all things considered.  Cave walls have some nice textures, just don’t get to close, and mix up their color palette enough between stages to feel fresh.  Some decent lighting effects as well are utilized as you use your flashlight to navigate these pitch-black catacombs.  Enemy drones and your own ship don’t carry a tonne of detail, but don’t offend either given the gameplay.  Explosions are on the weak side and typical of PSVR, distant objects can become a jumble of pixels, but overall I enjoyed the presentation here.

The sound on the other hand needs a tune up.  I liked the soundtrack as it carried a menacing and foreboding tone.  The sound effects are where my issue lies as any effect besides guns and explosions annoyed me.  Every time you collide with a wall you get a ‘pew’ sound which is annoying, what’s worse is that same sound is used when the enemy is shooting you, so in a panicky situation it can be hard to determine if you are under fire or just backed up into a wall.  A red alert triggers when your health is low, also penetrating my brain and driving me toward homicidal thoughts, unless I was lucky enough to pick up some health from an enemy or destructible gem formation.

A few other random issues still need to be addressed.  Colliding with a cavern wall results not only in momentum stoppage, but will also slightly turn your vehicle in a seemingly random direction messing up your aim and making hard to readjust as the enemy looms ever closer.  As you progress, you unlock journal entries which flesh the vents leading to your current circumstances, but once again seem to come at random or are based soley on progression.  Some achievements are based upon the cards(power-ups) you are given making them unachievable, unless you get the right run, forcing more playthroughs than should be necessary. 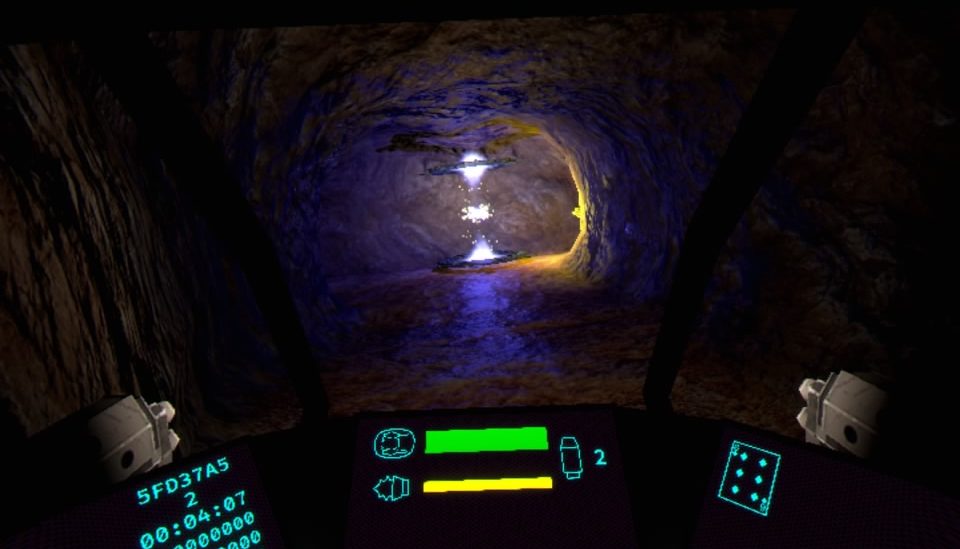 The end of the level, and the signal that things are about to get more difficult!

I still had fun with Cavernous wastes and spent plenty more time playing this than I should have.  The exploits here are by design while they initially appear to be a detriment to the game, I soon saw the blessing in disguise that they were.  This just needs some TLC and a patch or 2 to fix key issues.  This is equal parts fun and frustration(funstration?), and while I found this to be a positive experience, I can’t recall the last time I was this frustrated with a game either.

What would I pay?  Including every issue I mentioned, this is still easily worth the asking price.  Hopefully a few key points are addressed in future patches making this a fairer experience while still keeping the challenge at high.  I really want to beat this thing, but it seems borderline impossible in it’s current state.

POUNCING KITTEN GAMES LLC  provided theVRgrid.com with a press copy of this game and, regardless of this review, we thank them for that!