Big franchises in VR are more rarer than they should be and the ones that utilize those properties beyond your basic ‘VR experience’ are even more hard to come by meaning that, whenever a franchise makes their way to our home-based hardware, I’m always a little leery as more often than not, they end up feeling like cash grabs or loose tie-ins that aren’t worth the time to play, let alone the money.  With that bleary introduction, the Transformers have arrived on the aging PSVR headset, offering up an on-the-rails arcade style shooter that, I think is based largely upon the original series though with some updated model’s representative of the more recent cartoons. 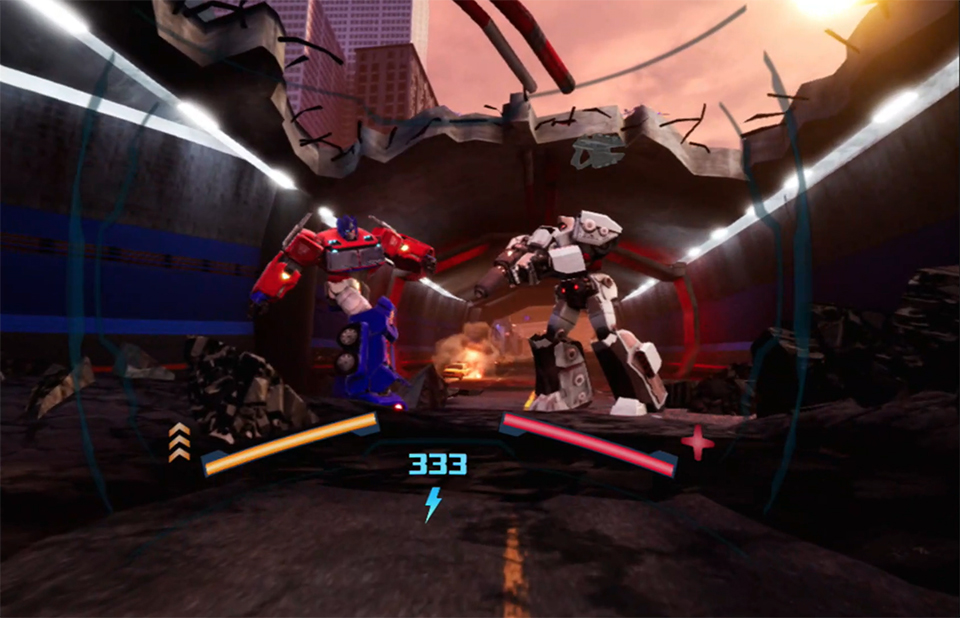 Get up and close as these Robots battle around you.

For those that have played, literally, any on-the-rails VR shooter the controls here are stock with your dominant hand holding a standard weapon and your off hand holding a sword, shield or railgun based upon the class of exosuit you choose.  An optional tutorial explains the basics of combat including the need to dodge incoming fire, shooting powerups and shooting your Ultra Weapon (a beam rifle or grenade launcher) which requires you to reach over your dominant side shoulder to switch too it.  That weapon has a very long cool down, though like all weapons in this game, ammo & power are infinite.  Powerups include health, currency, charge boosts for the secondary weapons and full auto for what is otherwise a single shot main gun so start exercising that trigger finger as you’ll be pulling that trigger thousands of times as you dispatch the Decepticon horde.  Megatron is up to his ususal tricks and you, as the new human recruit, must aid in stopping him through a campaign comprised of 6 stages that can be played on 5 different difficulty settings from story to brutal.  No matter which difficulty you play on and whether you succeed or fail, you’ll accrue Energon Currency that can be spent on upgrades to all of your weapons and health so no matter how good or bad of shot you are, the unlocks will make the game easy of enough to get you though any stage on just about any difficulty with relative ease.  Each level scores your performance so the more accurate you are, the more environmental objects you destroy (which makes little sense), the difficulty you play and the number of foes you dispatch all affect your payout.  All of these elements lead to a game that feels entirely too familiar and while every game mechanic in here works as it should, none of them offer too much in the way of excitement. 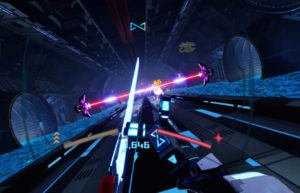 Dodge and shoot your way to victory.

I was really looking forward to being right in the middle of an Autobot Decepticon conflict but once there, I felt each encounter was little more than a small taste of what I was looking for.  The 6 stages take you to a variety of locations from city streets, subterranean bases and the planet of Cybertron.  While you have an exosuit, to justify the games on-the-rails action, you seem to be on a large hovering platform that slowly moves through each stage at a slow, but steady pace, always moving forward regardless of the action happening ahead of you (the view behind you is blocked by your hover cart).  The first mission almost immediately shows Optimus Prime battling Megatron and as you approach the 2 titans duking it out, unable to interact with them in any way, it’s odd that you pass right by them in the midst of a battle while you move on to take out all the Insecticon drones that get in your way.  Almost every encounter is like this with the Transformers showing up for a few seconds only to run/jump/fly/fall out of sight while you continue ever forward.  Each stage is rendered quite well and carry a fair bit of detail giving the game a decent look that does the license proud by not only honoring the source material but avoiding any immersion breaking pop-in or draw distance limitations.  During each level, the attention to detail is quite high and watching the robots talk to each other did bring back all my memories from the very cheesy, but still awesome, original 80’s cartoon though that doesn’t account for the cut-scenes in between each stage, which are little more than 2D comic book type cinematics that underwhelm in the VR.  The unfortunate thing about this whole package is that whether this looked good or bad, it all just felt very typical of a VR Ride, not looking particularly amazing, but never looking bad enough to be offensive. 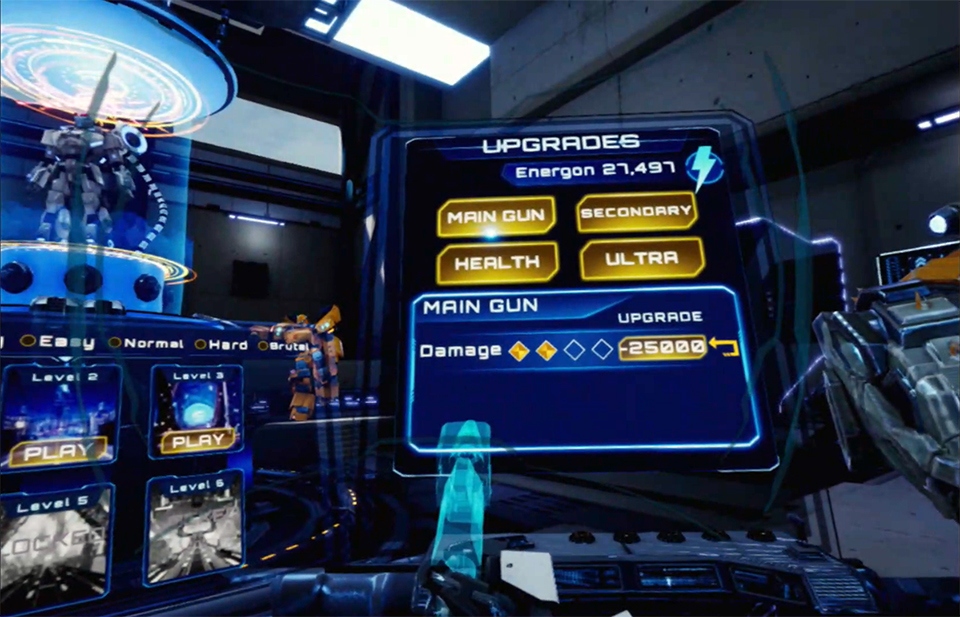 In between missions you can upgrade your weapons & abilities

Speaking of typical, outside of the voice acting, which features actors who have voiced some of the more recent Transformers projects is a generic sounding rock soundtrack that could fit in nearly any shooter offering unmemorable, but inoffensive songs that don’t necessarily fit the action, but work nonetheless.  The voice acting, as I said, is very reminiscent of the cartoons offering a dialogue tailored towards the G-rated audience that works well enough save for the extremely odd choice to need to look directly at who is talking lest their speech be muted making it all too easy to miss conversations because I turned my head slightly away from the action. 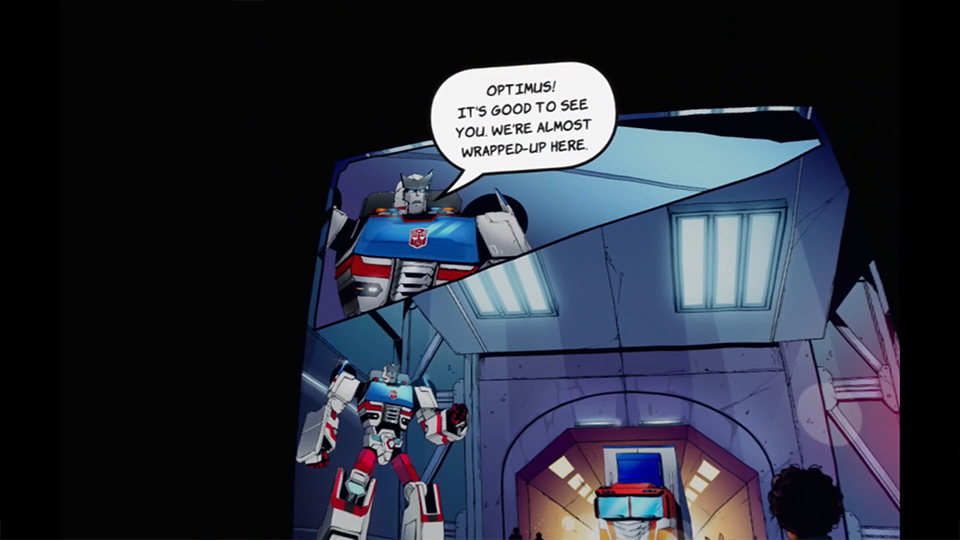 Cut scenes leave a lot to be desired.

I may sound a little harsher than I mean as I pick this apart as, for the most part, this delivers exactly what I expect out of a relatively inexpensive VR tie-in to a popular franchise.  Each stage will take around 15 to 20 minutes to get through, though should you fail, you’ll be kicked back to the main menu where you can spend whatever loot you have but must start that, or any unlocked stage, from the beginning. I played on normal until the 3rd stage where I died and had to replay it so I dumbed it down to easy and finished off the campaign with relative easy, nearly dying on a few boss battles, but making it to the end without issue.  In that time, I accrued enough loot, to max out most of my upgrades and dove back in on brutal mode and, with those powers maxed out, had no issue getting though a few stages with the enemies being almost just as easy to kill as on the other difficulties and the only notable difference being that I never once saw a health boost while playing on that hardest setting.  What that meant for me was there was no reason to replay the stages except to enjoy all the scripted action all over again which isn’t that great to begin with.  It’s not bad in any way, it’s just all serviceable meaning that you could reskin this title here with GI Joe, Terminator, Marvel or any other big-time franchise and it wouldn’t skip a beat. 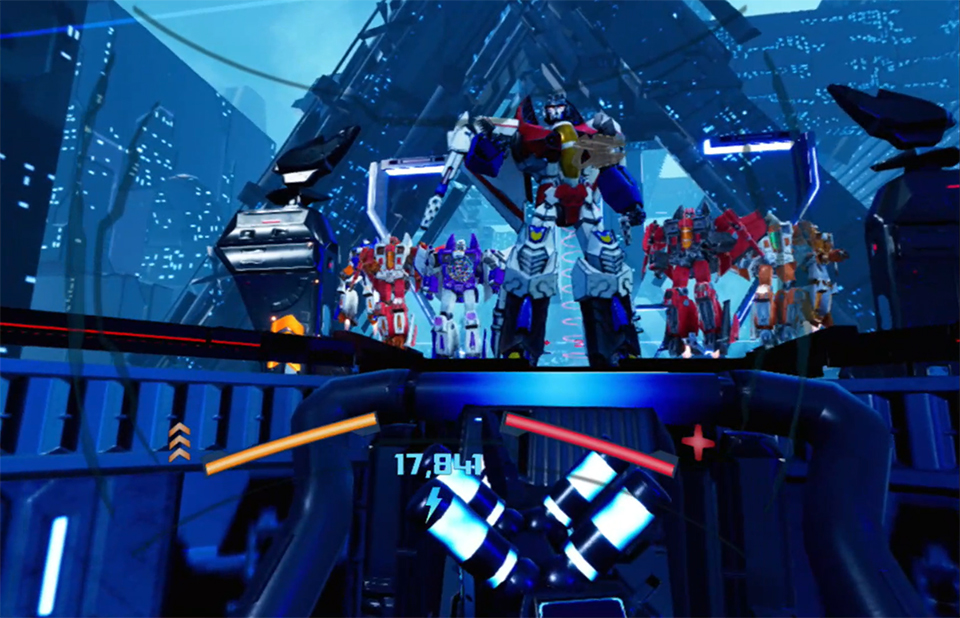 You’ll see a lot of familiar faces if you are a fan of the franchise.

Beyond Reality is not a bad game, but it is just a paint-by number rail shooter with a little Transformers fan-service.  You’ve played this game a bunch of times before and if you enjoy these types of VR experiences, then you’ll enjoy this one just as much as any other.  For those looking for anything exceptional, you’ll be left wanting as it offers up little more than a rail shooter experience that you’d expect to find in a local VR arcade.

What would I pay?  $20 US for this is too much for what is effectively less than 2-hours of game time where every stage and boss fight feel nearly identical.  It checks off all the right boxes for a VR rail shooter but doesn’t capitalize enough on the license offering up a minimal story and repetitive gameplay with very little replay value.

Meta4 Interactive provided The VR Grid with a press code for this title and, regardless of this review, we thank them for that.