One of PCVR’s finest has finally arrived on the PSVR and is one of the most intense, fun and unique shooters I have played in sometime.  Regardless how you feel about this genre, the time mechanic alone is worth checking out as this may be one of the more mechanically impressive games ever made. 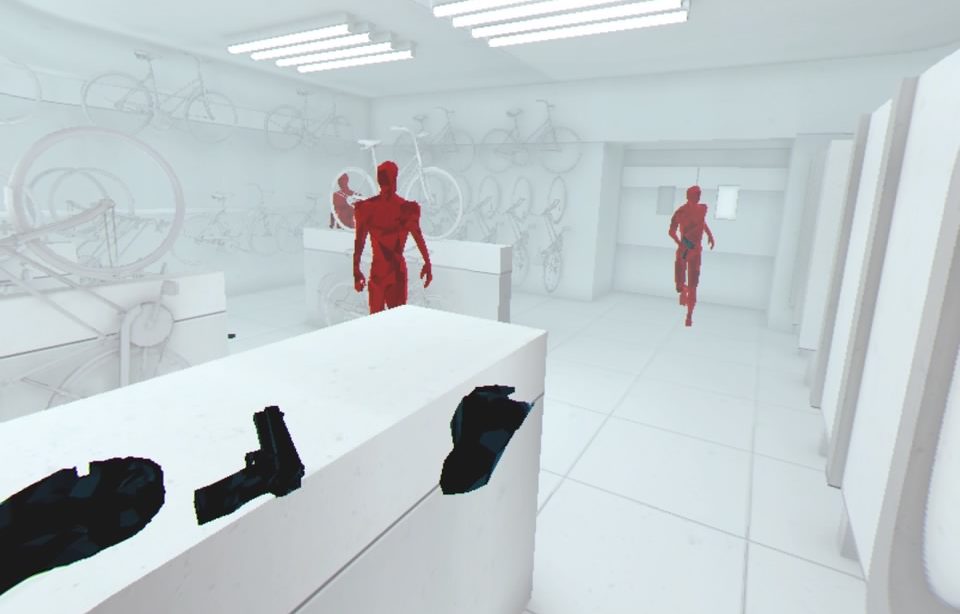 Oh it’s about to go down, it’s gun grabbin’ time!

With little story presented, you are left to basically fill in the gaps and make up your own reasons for the mayhem you are about to unleash.  After a brief tutorial level you remove your VR headset (inside a VR headset!…so meta!) and look about your ramshackle room at the PC’s and monitors before you.  Insert a disk and your off!!  The game takes place in a virtual world where you are tasked with dispatching enemies is successive levels, each broken up by their own shorter stages.  Each stage does carry a theme, so pay attention and you’ll see how they all stitch together.  It would play like a typical shooter save for one, amazing mechanic…time only moves when you do.

This flips the FPS genre on its head and adds a whole new complexity to gaming that I have never experienced before.  Utilizing 2 move controllers, mapped to each hand, you pick up, shoot and throw whatever is in your reach.  With time attached to your motion, this plays out like you are Neo in the Matrix, dodging bullets (even catching them) all while taking out the red menace who are out to get you.  The enemies here are human in shape, comprised of triangles and squares, stuck together to look like they are made out of glass, and they may as well be.  One hit, anywhere on their bodies, takes them out of play and while this may seem to make the game easy, I can assure this offers a tonne of challenge.

Like the ‘Reds’, you can also only take 1 hit, so being aware of all your surroundings is a must.  Keep in mind that every motion you make advances not only the enemy, but the bullets they fire as well, and the faster you move, the faster the world moves around you.  The gun mechanics are solid but really aren’t the highlight here.  Punching your fist through an enemy’s head or catching a knife in mid air and tossing it at an incoming dude is where this game makes you feel like a badass.  Additionally, each stage is broken up into smaller set pieces and even that can be used to your advantage as firing bullets or throwing a weapon to the next area, before you advance, could kill an enemy or supply yourself with an extra firearm to dispatch your foes.

I should mention that you aren’t going to know what part of the map you’ll be visiting next until you advance and, as the game progresses, you are guaranteed to die, forcing a restart to the 1st part of the stage.  This isn’t normally a bad thing as a few repeat runs allow you to memorize what’s coming up next and adjust accordingly, giving you smooth runs that are a joy to behold.  However, on a few occasions I just got stuck, forcing way too many replays with me pondering just how much force it would take to crush a move controller, and knowing with the rage fueling me, I could freaking do it! 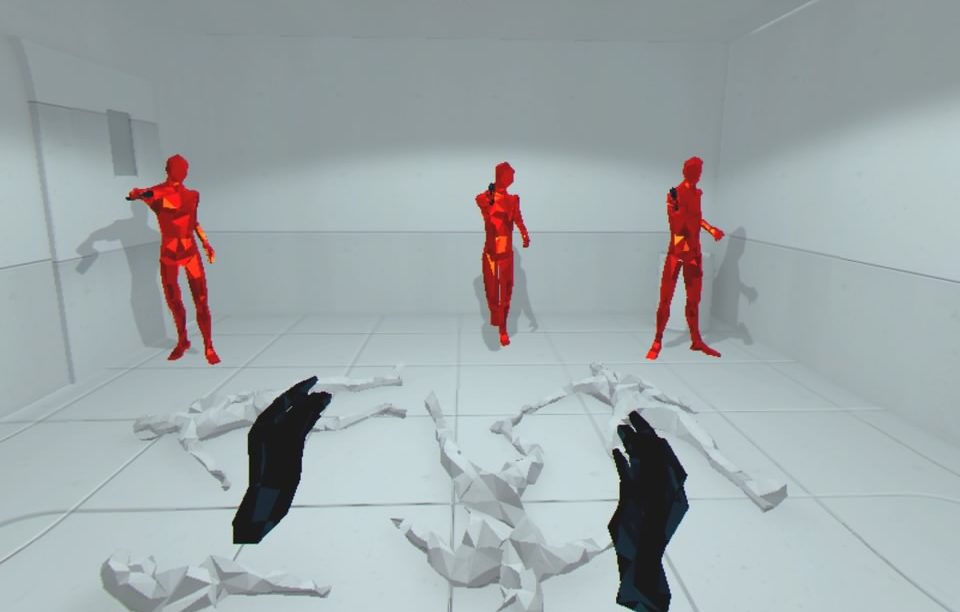 Looks like I brought fists to a gun fight…LET’S DO THIS!!!!

The game looks great with an art style used in games like Bound or Drift; besides the menu screen, everything is very minimalist.  Yourself, enemies and items are shapes, stuck together to look like people, hands or objects such as weapons, pots or other throwable items.  While this looks great, on many occasions I noticed jaggies that were just a little distracting and will hopefully be remedied sooner than later.  The levels offer almost a white sketchbook type look, not carrying a tonne of detail, but still fitting the game beautifully.  Sound effects as well are top notch with everything sounding as it should, but in slow motion.   There isn’t a lot of music to speak of, which feels like a misstep and I was forced to listen to my own tunes just to help get me more in the mood to murder unrelentingly!

Though there is a fair bit of skill and spatial awareness needed to master this, not having these isn’t the only reason why you’ll fail.  For the most part the game works great, but when tracking issues show up and your struggling to grab an item or watching your hands shoot off into the distance, it can be really frustrating.  Still, these issues did not happen a lot, and the individual stages are very short with next to no loading times so while death may come often, your right back into the action within seconds.

Besides the campaign, which will take you around 3 hours depending upon your skills, there are host of other modes and challenges that add a whole lot of replayability to the game.  A few challenge options are available like ‘headshots only’ or ‘no weapons’ which allow you to play through the campaign with some added difficulty.  There is a SUPERHOT FOREVER mode which allows you to play endlessly, level after level, until you decide you have had enough.  It’s a great mode for those looking for more content, but it’s also challenging and is built more for veterans than newbies, which makes sense. 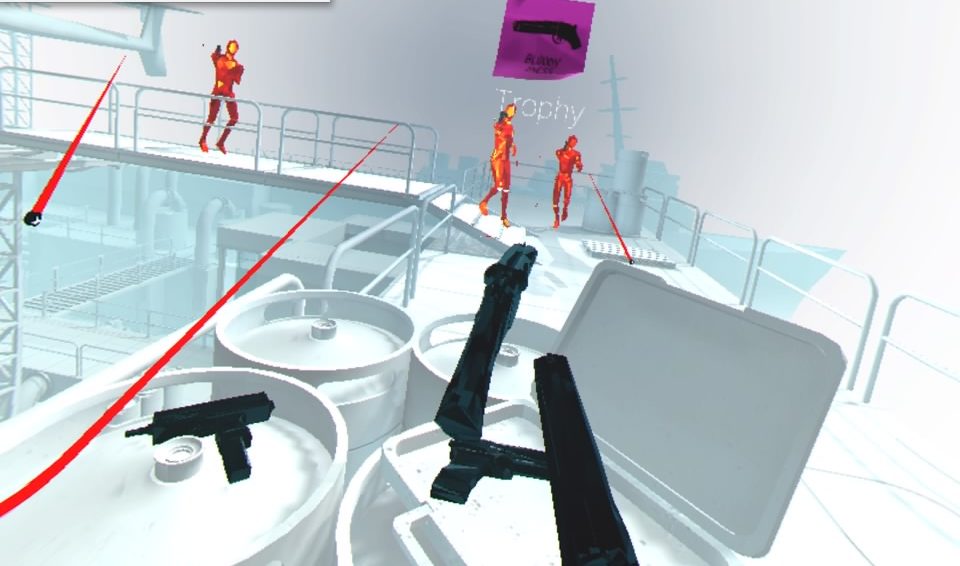 They call me the Bullet Dodger!

Issues aside, this is the type of game that sells systems, and for good reason.  It’s fun, challenging, innovative and showcases the finest PSVR has to offer.  It’s not perfect, but it is a spectacle nonetheless and if it were just the campaign alone I would be happy, but the inclusion of different modes and an ‘endless’ option ensure hours and hours of gameplay and fun.

What would I pay? $24.99 is a steal for what you get here.  It’s not often a genre sees a significant new mechanic, and even more rare when that mechanic is awesome.  A must own!

SUPERHOT TEAM provided theVRgrid.com with a review copy of this title and, regardless of this review, we thank them for that!