Do you remember the cartoon ‘Cadillacs and Dinosaurs’? No? damn I’m old.  Anyways, it was a futuristic take on the wild west, only the people in this world co-existed with Dinosaurs and some modern-day tech.  Dino Frontier, in my mind, is the video game prequel to that franchise, taking it a little further into the past to a truer version of the Wild West…except for the dino’s.  Throw in some great table top RTS elements, a unique visual style and very competent controls and that makes for a pretty decent game. 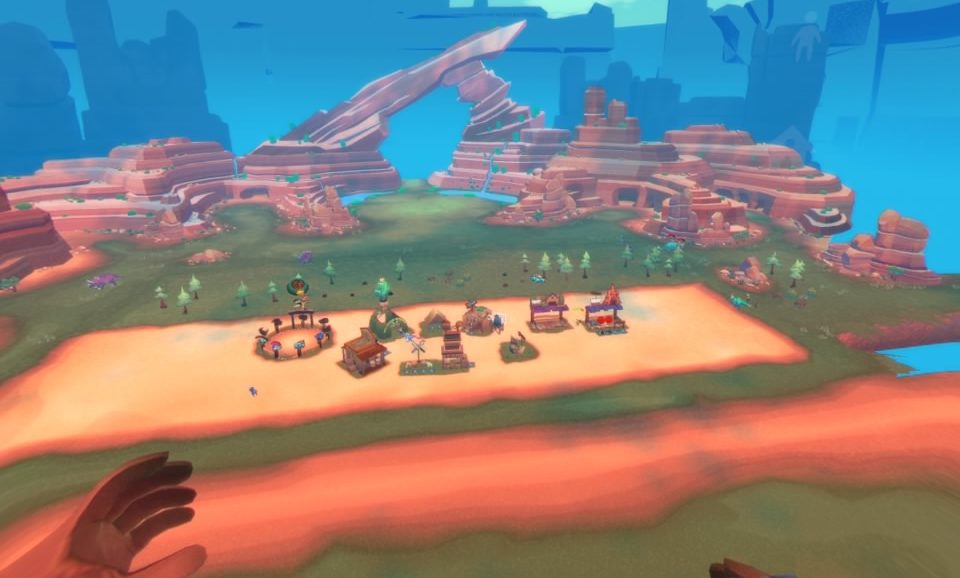 You settlement, in its early stages.

You play as Big Mayor, and your main purpose is to create and grow a settlement for your people. It plays a like Tethered or O! My Genesis, with you taking a ‘god-like’ role and interacting in the game with your 2 giant hands.  Most of the game involves you simply grabbing, or touching what you need to interact with and subsequently performing a necessary action.  Picking up and moving your settlers to a task or building is simple enough, but other more menial jobs are also present.  Watering the plants to replenish your wood and food supply, or picking up a hammer to build/upgrade a building, along with other tasks that mix up gameplay.  Thankfully your settlers are pretty self reliant and will keep themselves busy with an assigned task, or if unassigned, will do their own thing to help you out.

This is a game about resource management, upgrades and expansion.  At the onset, you’ll be scrambling to delegate tasks, keep your food sources stocked and keep your settlers alive.  However, as the game progresses your settlers also gain skills, and to assist them are the dinosaurs.  You need to capture these dinosaurs with some bait and than have your settlers assail them until stunned, whereupon you capture it and train it for a species-specific task.  Some dinos, help gather food or clear wood or just defend and all ease the burden of micro-management immensely.  Unfortunately you can only capture 1 of each dinosaur type, which does feel like a misstep, but the given the play area, probably makes sense.

Additional resources are provided by a nearby farm and a mine.  Both of these are separate from your main base, meaning you have to travel to them and manage them individually.  Both also offer slightly different gameplay elements but the fun one is the mine.  As you upgrade certain buildings, they can house more people, and one of those buildings allows you to bring a few settlers to the abandoned mine to gather gold and ore.  What makes this different is the Bandit King, who relentlessly attacks the mine and your settlers, forcing you jump back and forth between gathering resources and defending the mine.  This is ‘Horde’ mode in a tabletop RTS;  it works great and the longer you last, the more resources you accrue.  The farm just requires you to plant and water seeds as well as place a stick a dynamite on a pile of rubble for more gold and stone resources. 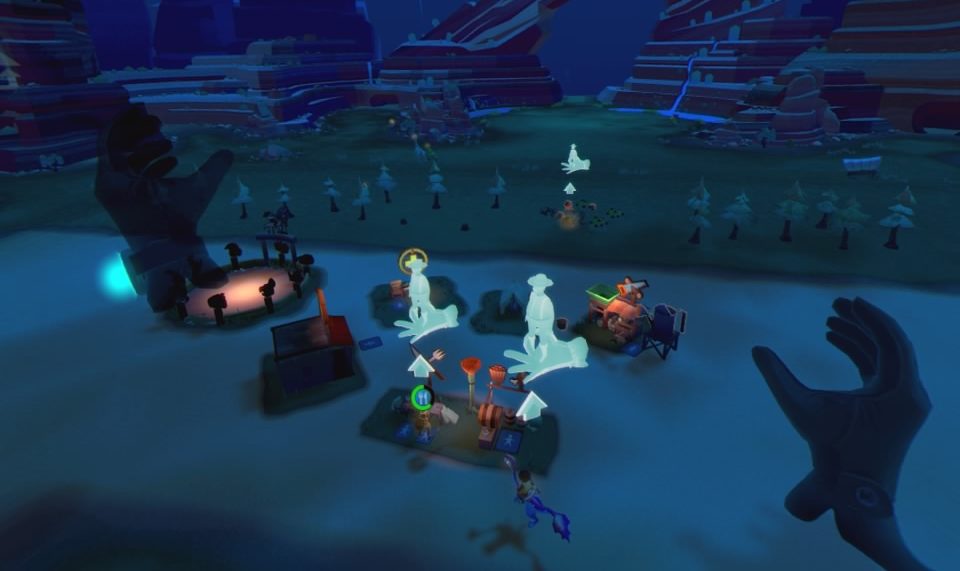 The night time scenes also offer their own sets of obstacles

The game looks phenomenal and, with very intuitive controls, allowing you to zoom in ridiculously close to check out all the minor details on the sprites, buildings and environment.  As in Uber Entertainment’s previous VR release, Wayward Sky, everything is cartoonish with exaggerated and over the top characters.  The stages all look sweet and not only can you zoom in or out, but you can “pull” yourself around the map and rotate it as well letting you take in all the sites, and maybe spot a few secrets.  It’s carries a perfect polish and the amount of care that went to the art design is noticeable.

Good visuals need good audio and we get that here thankfully with very light toned, old western feel.  Loading screens feature 2 settlers around a campfire singing songs and stories about the trials and tribulations they face and are fun enough to listen to that, even when the game is loaded and ready, you won’t bother hitting ‘X’ until the song (or speech) is done.  The music is exactly what you think and everything sounds just about as stereotypical as you can imagine, in a very good way.  The voice acting is great and I personally loved the Bandit King, who so over the top, I hilarious.

In no way is this game a breeze and besides the micromanaging of settlers and resources you must fend off bandit raids, random dinosaur attacks and few other hiccups that come your way.  Add in the Mining and Farming sections and this game never stops keeping you busy.  The pacing is a little slow at first as mechanic after mechanic are introduced with the game giving you plenty of time to learn each one.  As the game progresses, the burden of micromanaging seems to diminish, but expanding your settlement only increases your need to be everywhere at once.  You can also only build one of each building type, which for veterans of the genre, may seem a bit shallow when compared to god-like predecessors, but is great for easing people into the genre.

There are a few annoyances here the main one being repetition.  It’s the name of the game with games of this type and while new elements are introduced often, initially, there are still moments where I felt all I was doing was watering plants, picking up wood and fruit and just making sure my settlers are doing what I needed them too.  Secondly is that the farm and mine sections are separate from your main base, which means every time you go to and from you get a loading screen.  The interludes here are great, but after a while I just wished the transition was a little more seamless.  Lastly was a tracking issue I experienced during long plays where the camera would just get all wonky, mess up my position in the game and have barely track my Move controllers.  Restarting the game remedied this issue, but it did happen on more than one occasion. 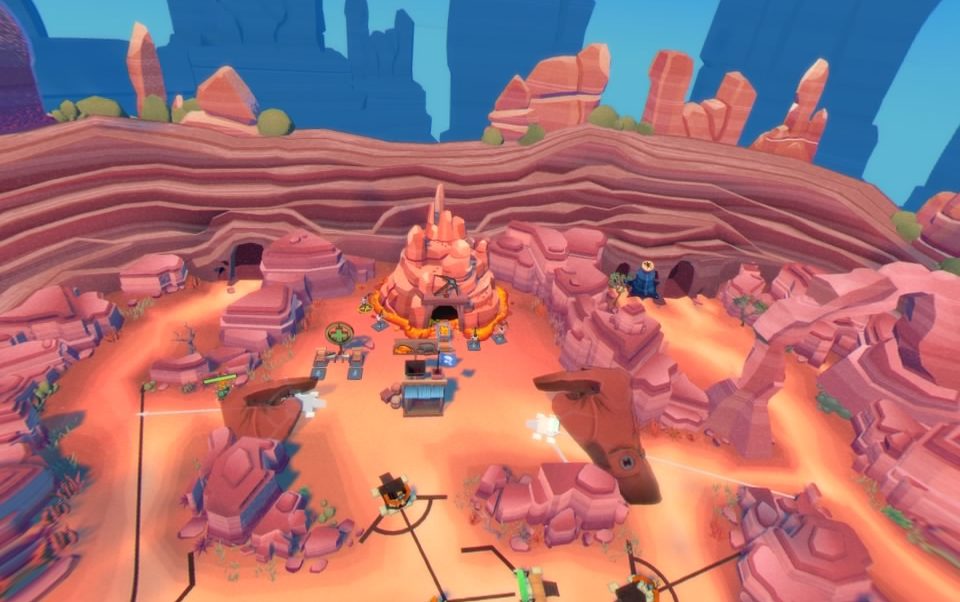 The mine and most hectic fun you will have in the game!

It’s hard to argue with the quality and value here.  The few shortcomings don’t detract to much from what is and awesome experience.  The game also has a decent campaign, at least for someone of my skills, and will take around 4 to 6 hours to complete. If you’re in the micro-managing mood than strap on those cowboy boots and get ready to rassle up a dinosaur and tackle the old west like you have never seen it before.

What would I pay? $30 is excellent value.  It’s a fantastic “god-like” game with tonnes of depth, content, and humorous moments.  The intuitive controls and fantastic presentation are just the icing on the cake.

Uber Entertainment provided theVRgrid with a press copy of this game and, regardless of this review, we thank them for that.