This review has been updated and the score has been changed (originally a 4.5/10) to reflect the recent update on October 9th, 2017

Ah stuffed bears, a staple of many a childhood for the last century or so.  Cute, cuddly and fuzzy are some of the best words to describe the loveable, huggable stuffies.  So what happens when they gain sentience? Well they try and take over the world obviously, and it’s up to you to thwart these dastardly bears from their world ending goals.  I recently reviewed and enjoyed the Gear VR version of this game and, while not the most impressive shooter, it won me over with it’s charm and challenge.  The PSVR version adds a few more mechanics and modes to drastically bulk up the gameplay, but suffers from a few setbacks as well. 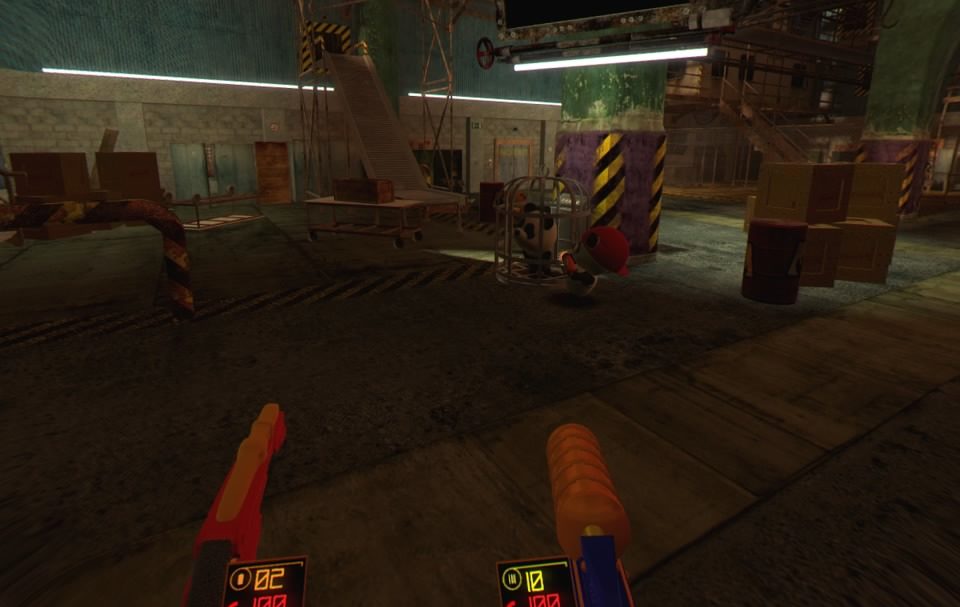 As this is a dual wielding affair, you are going to need 2 Move controllers.  Your level specific weapons are placed at your side on a visible belt (ala Arkham VR) and after grabbing them  with the “thumb” button, you fire with the trigger until ammo is exhausted.  After that, just toss you guns aside and grab the new ones that respawn on your belt.  I found this mechanic a little annoying when compared to just hitting a reload button, mainly due to the fact that if your camera isn’t in the perfect position, a slight loss of tracking could result in a missed grab making a tense situation worse.   As this is a PSVR wave shooter, all the action is limited to 180 degrees in front of you, ensuring that it’s very difficult for these bears to sneak up on you.

Right at the get go you are greeted by a panda in a cap named Buddy, who tells you about Frank, the teddy with the patch, and his plans for world domination.  After that you simply choose from 1 of 3 levels (broken up into 5 stages each) and shoot some teddy bears.  The first mode, Survival, is your basic shooter where one hand has a dart gun and the other a shot gun and you must survive a couple waves.  The second mode is ‘Fire’, where instead of a shotgun you are now armed with a hose, used to put out small fires while the stuffies try and assail you.  Lastly is ‘Bomb’ where you are now armed with a freeze gun and must blast incoming bombs on conveyor belts before they hit some stuffed pandas.  On the default difficulty setting, only the last stage in each level offered any challenge with the game just being way to easy.  The recent patch added a 2nd (and very welcome) difficulty level that ramped up the challenge nicely, and my enjoyment of the game as well.   Bears come at you much faster forcing you to be on your toes at all times, this is especially true in the ‘Fire’ and ‘Bomb’ modes. 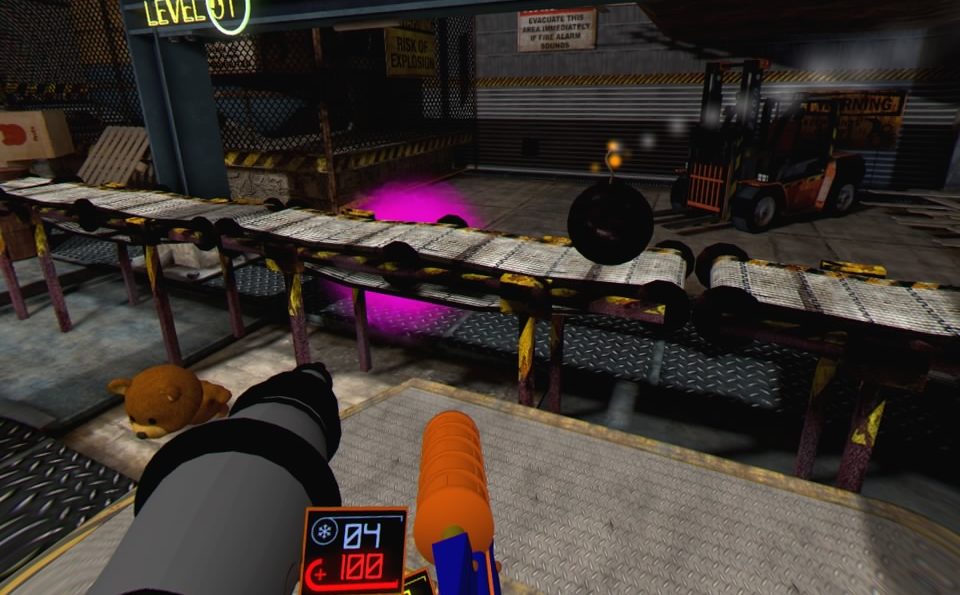 Freeze those bombs or you’ll be letting innocent pandas die!

While the game looks significantly better than its mobile predecessor, it’s not that good looking.  Each themed level basically looks the same, just organized slightly different than the previous level.  The bears look alright and come in a few different forms, but never once was I impressed by anything I saw and even the final boss fight was just more of the same.  All of this is worsened by the audio.  I loved Frank in the original, he dealt out funny bear puns like they were going out of style, and they must have because now, 90% of the jokes are just rebranded movie quotes with bear stuff supplanting each one.   None of them are funny and almost all the jokes fall flat.  Buddy the panda also has a very stereotypical surfer dude lingo that also annoyed throughout my playthrough.

The game is designed so that you only can only beat the 1st 3 stages in each level type.  The only thing that tells you this is a lit-up control panel that displays 3 lights on one side, and 2 lights on the other.  You can’t beat all 5 levels until you beat the 1st 3 in all the stages first, triggering a cut scene whereupon you can now finish the last 2 levels.  It’s just annoying, unnecessary and forced me to play through levels more than once until I realized what the game was asking of me.

The patch improves 2 key issues I had with its original release.  The first being the new ‘crazy’ difficulty, which ramps up the challenge, especially in the last few stages.  Because of this, I also had a lot more fun on my 2nd go at the game and overall just enjoyed the game more.  While this is welcome, I think an even harder difficulty would draw me in even more as I still felt like my skills weren’t pushed to their limit.  The second ‘fix’ was the addition of global leaderboards which, when combined with the new difficulty level, make the game way more replayable and a motivating factor in attempting to hit the score modifying targets that pop up in each stage. 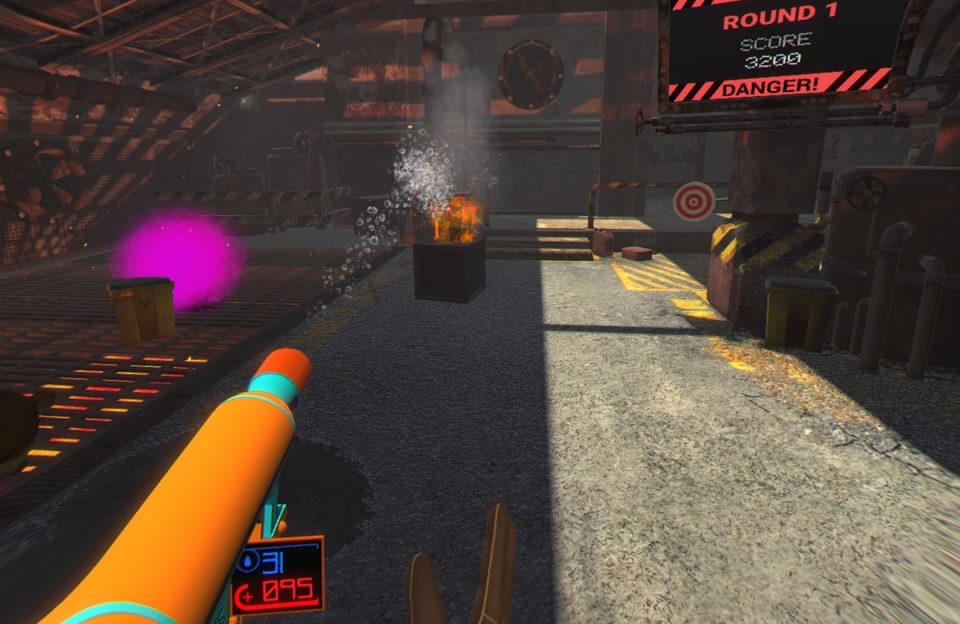 Shooting bears while putting out fires has never been more fun thanks to the ‘crazy’ difficulty mode.

The new patch, in my opinion, greatly adds to the fun factor and increases the value of the overall package significantly.  I was originally unimpressed with the easy difficulty (and I guess I still am) and I would recommend that VR veterans play on the ‘crazy’ difficulty.  It’s relatively short and still shouldn’t take you more than an hour and a half to conquer but the global leaderboards greatly add to the replay value, especially when you see just how close you are to the guy(or gal) above you.  I still have issues with the presentation, but much of that is personal preference, and others may find it less annoying than myself.  By no means is this a perfect shooter, but the fixes implemented definitely push ‘Sneaky Bears’ in a positive direction.

What would I pay? $10 would still be my personal line in the sand here.  This is still a relatively short game, and if you don’t care about leaderboards, than there still isn’t a lot of reason to come back.  That said, if you care about your top score than the leaderboards and new difficulty option should be a decent draw for those looking for something cute and cuddly to shoot.

WarDucks provided theVRgrid.com with a review code for this game and, regardless of this review, we thank them for that!