Compound has nailed the pixel art, retro, first person shooter genre in all the best possible ways. This procedurally generated roguelite might at first come off like a simple throwback to the days of Wolfenstein, but Wolfenstein in VR this is not.

I am a huge fan of retro first person shooters and from time to time have been known to lose days of my life playing roguelites. So yeah, Compound is a game for me, and one I actually played previously on PC. So, with the incoming release of the Quest version, I thought it a perfect opportunity to jump back in and put out a full review for all of you. 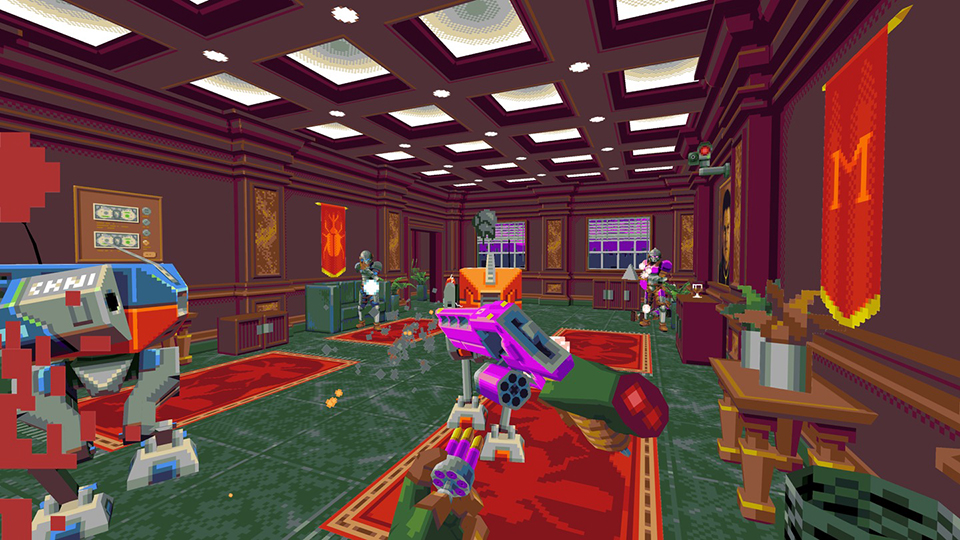 The retro pixel art style looks great in the headset.

Compound tells the very deep and heart wrenching story of man and his gun. Ok, it’s not deep in the least, in fact it’s barely a story at all. And honestly that’s how I like my retro shooters. Just tell me who to shoot. Here in Compound the premise is very “The Raid Redemption”, an awesome Indonesian action movie that saw the protagonist being tasked with starting at the main floor of a high rise and working his way up to the top. That’s you in Compound. (Side note, if you haven’t seen The Raid and you like action movies- make that your next movie.) Anyway, the premise here is simple and getting into the game is very simple as well. Heading off to the shooting range first off is a good idea, as it will help you get comfortable with the reload controls. I found they took a few minutes to get used to the semi manual/ semi arcade reload mechanics of each gun. After a few minutes of this, with your difficulty level chosen, you can get right into it.

The key gameplay mechanic here in Compound is clearing a level of enemies, then evacuating back to the elevator to clear the next level, then the next and so on and so forth. Like I said, basic. At first I almost wrote the game off as yet another basic and easy retro knockoff VR shooter with dumb A.I. and some colorful design to mix things up. I was wrong.

Compound starts out slow and simple, and for its own good, maybe too slow. Starting off, the only weapon you have are the blue starter pistols found in the glass emergency boxes found at most of the entrance doors early on. It’s important to pay attention though, because there are actually three different styles of these pistols, each with very different firing styles. Regardless, ammo is infinite on these and reloading automatic. As such, I quickly dual wielded these. Ammo and health is picked up off fallen enemies, and looking at either wrist shows you a layout of the level, what rooms you have yet to explore, and where if any new weapons might be located marked by a white circle. It is also here that you can track your ammo levels. Now these early levels, especially on the easy difficulty really are Doom for dummies and I pretty much walked through these levels. However, the game pretty quickly starts to throw more and different enemies at you, all with various capabilities and behaviors. As soon as the game started doing this, Compound began to get its claws in me and I started trying out different weapon combinations to counter these various enemies. After a while I quickly tired of the game’s reload mechanic and really preferred dual-wielding  as this was where the game found its flow. Thankfully this brought me to the mutations vending machine found in the games staging area. Low and behold, I found a mutation that allowed for auto reloads (though at a slower rate than manual). Sounded like a deal to me and off I went, never looking back. 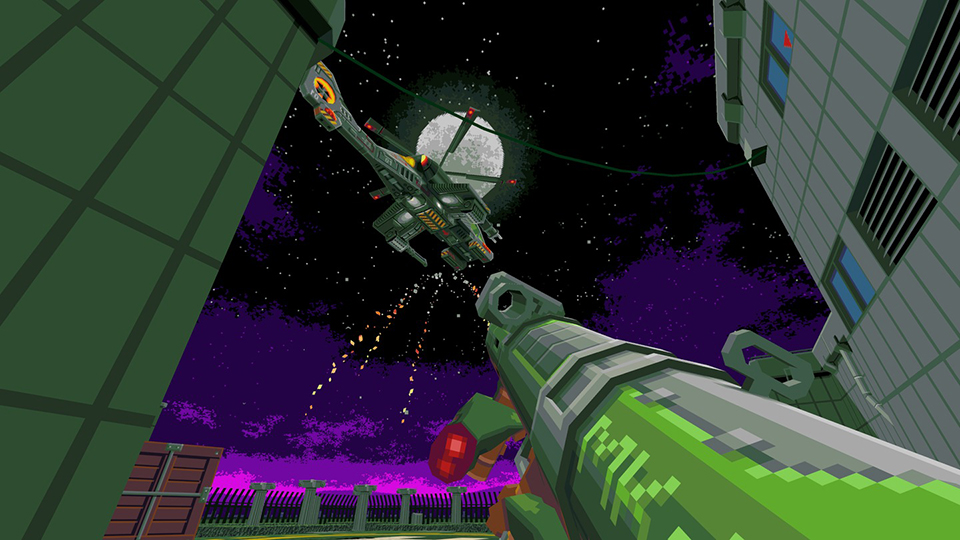 With my newfound mutation and a few lucky gun pickups early on a tore through the 20 or so level campaign…and got destroyed on the final rooftop level. Yes, I still found the game to be a bit basic, and the A.I a bit standard retro shooter dumb, but now I was really hooked. Then the game surprised me! Heading back in for another go around I quickly noticed that even on the same difficulty setting (which was still easy by the way), this was not the same game I had just played. Harder and more numerous enemies started showing up quicker, and new weapons that I had unlocked during my first playthrough started showing up. Future playthroughs unlocked new mutations, more weapons and the game still skewed harder even on easy mode.

Well now I needed to know what harder difficulties played like, so like an idiot I went right to hard and after two levels being hunted by a giant, crazed rat I was annihilated. This happened a few more times and I quickly realized I wasn’t ready and simply needed more mutations and better guns in order to even think about poking my head back in there. It turns out you can even unlock a fourth difficulty level, so this game has some legs for those persistent enough.

Now, besides having a solid roguelite game loop, what I think helps to raise Compound above its fairly basic game design is that it’s just so damn polished. Created by just one guy, Compound spent years in early access over on PC and feels like a game that has been tuned and tweaked to absolute perfection. Admittedly I wasn’t the biggest fan of the reload system and the lack of an in-game seated play option is a glaring omission, but the movement, hit zones and gunplay itself is very fluid and a joy to play. Thankfully this continues to hold up well even as the game scales up its speed and overall difficulty- at times almost turning into a bullet hell shooter- and pulling it off seamlessly. 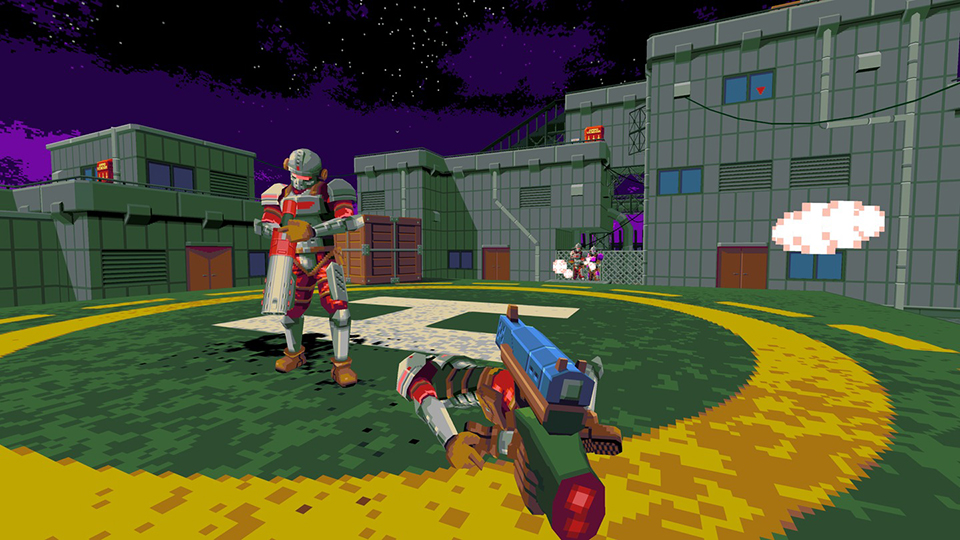 Visually it’s very much a retro visual style, coming off even more vintage than Doom, and almost more Wolfenstein with its clean solid colors and flat level design. Upon closer inspection, it was not nearly as pixel art as one may first assume, with the game world actually using larger flatter textures with pixels being used more as shaders. This style may not be for everyone, but it works for Compound and comes off incredibly clean in the headset. It looked to me like a straight port of the PCVR version, destructible environments and all. The nitpicker in me would have liked to see some modern lighting techniques used, a thing often being utilized in many modern pixel art shooters these days and a technique that can really add some life to these retro styled game worlds. In addition, I would have liked to see more verticality used, as the level design for the most part is very flat, simple and, admittedly, a bit boring and samey. It really only stretched its legs on the final boss level, but this proved the game engine can do it.

Soundwise, the game also keeps things pretty simple with gun sounds that aren’t quite retro zips and zaps, but aren’t exactly very powerful sounding either. However, they got the job done and didn’t make my ears bleed. One thing I did really like though was some nice utilization of audio cues that alert players to what incoming areas may contain enemy wise. Sounds of security turrets and driving robot tanks being heard off in the distance allowed for a bit of mental prep before charging in. Finally, I loved the music here as the game compliments its retro vibe wonderfully with a collection of nice synth wave tunes to keep the action moving forward. 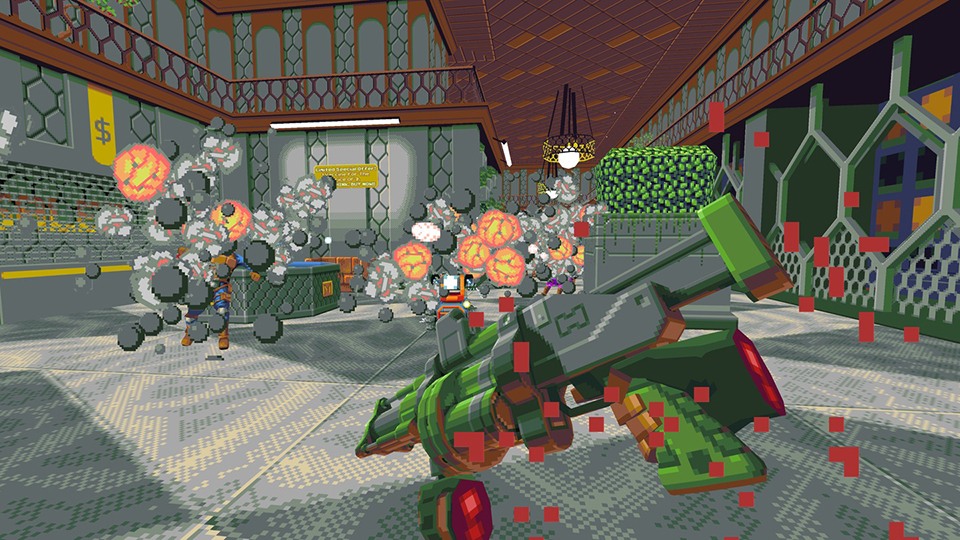 Explosions are always a blast.

This brings me to my final thoughts and review score. Compound is a simple but very effective roguelite shooter that drenches itself in all sorts of retro stylings. Fortunately it nails the most important retro shooter aspect, which is that it’s a fun, simple, shooter with little bullshit getting in the way.

With four difficulty levels, over ten weapons, a large variety of enemy types, and a slew of modifiers, Compound offers roguelite fans a lot to chew on even if the level design does wear a bit thin. The key takeaway here: Roguelite fans. The fun factor here is very much tied up in the game loop. So if you’re going in expecting a deeper retro shooter campaign and a rich narrative, this isn’t the game for you. Roguelite shooters fans? This is a definite buy.

notdead provided The VR Grid with a press code for this title and, regardless of this review, we thank them for that!