Dead Moon is something of an oddity when it comes to VR gaming as I’m having a hard time wrapping my head around what I just played.  The story, according to the store page, is that you are an archeologist returning from Mars who has to make an emergency landing on Phobos, one of Mars’ moons.  Upon arriving it takes mere seconds to realize that something is amiss and a few minutes later you are facing all manor of vile monster out to feast on your flesh. 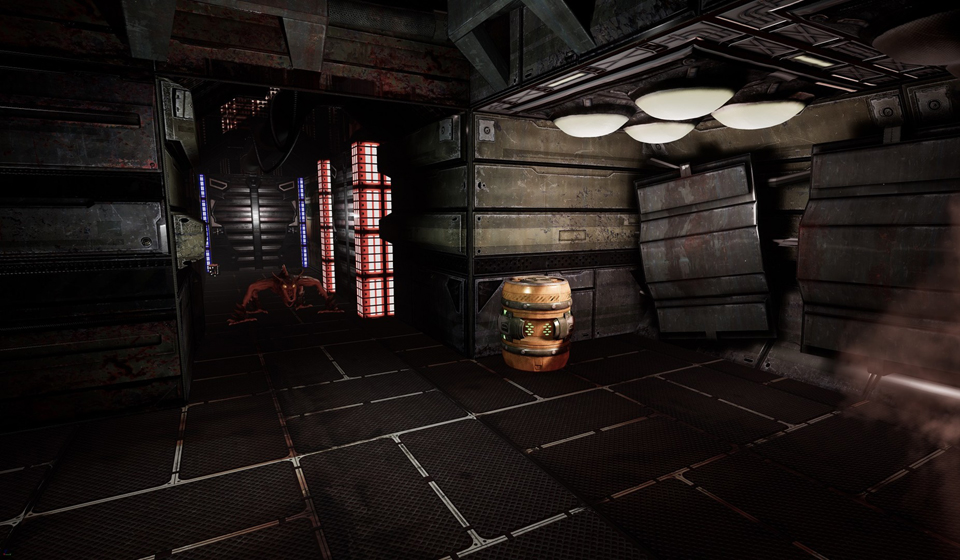 That barrel is waiting to be shot!

Two tracked controllers are needed here with a movement system that is both intuitive and cumbersome.  You navigate like in any typical VR FPS, thanks in large part to the thumb sticks, and you can switch which hand holds your weapon with the off hand being used to grab stuff in the environment.  What this allows for is easy support for right- and left-handed players but does mess things up as it’s so easy to change this on the fly.  Movement is assigned to the non-dominant hand, so if you accidentally switch hands, it can take a few seconds to figure out what the heck just happened and reset yourself, though this is easily avoidable as long as you don’t press a wrong button.  It’s also worth mentioning that the game is designed to utilize full tracking with only click-turning available which is unfortunate. Armor, health and ammo are scattered all around the map and need to manually be picked up and placed into your body to acquire, which I thought was a fun little mechanic that added a little immersion to the game.  Colored keys can be found that open up doors marked by that same color with hidden areas to find and portals that take you through that stage until you get to the end.

Dead Moon looks really good at times and really janky at others, but I kind of appreciated the jankiness.  Dead Moon feels like Doom circa 1995 only brought forward to modern tech but still retaining that old-school feel.  The monsters you face look great and carry a ton of detail and come in all manor of disgusting forms.  Shooting them spreads gore everywhere, which does not disappear leaving an absolutely bloody path in your wake and even though each enemy only carries a limited amount of animations, I was impressed by their look.  Stage design also feel ripped right from the old Doom games thanks largely to the key and door system but also because, the game is built around a space station’s rooms and corridors giving everything a slightly claustrophobic and sterile feel.  Explosive barrels litter some areas and the explosions also looked good, just make sure you don’t get to close.   There is a crazy weird lightning effect which looks and sounds awful but besides that, the style perfectly fits the 90’s era FPS action so I can forgive its many shortcomings.  Audio is mostly monsters making monstery noises and an occasional rock track and once again, fits in perfectly with the action. 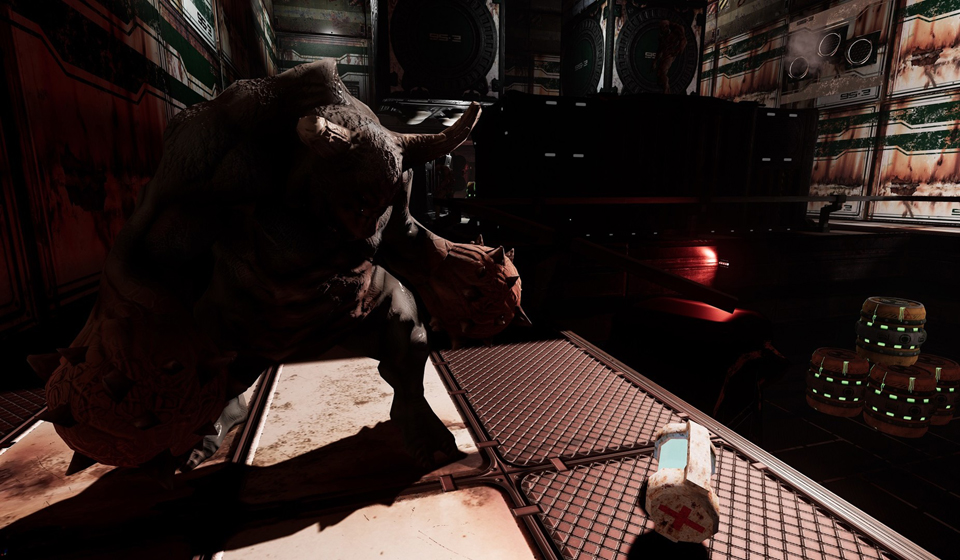 I can’t stress just how much Dead Moon reminded me of 90’s Doom.  It feels like developers wanted to replicate that formula, pay homage to classic titles like Doom and Quake, and even blatantly rip off some aspects and I appreciated all of that.  The enemy AI, contrary to the store description, is lacking as they most typically just run at you as fast as they can, with the Imp characters hanging back to toss insanely fast spherical blasts your way.  I almost never had troubles with any stage as ammo, health and armor are plentiful though the start of a stage when you have just a pistol can be a little challenging.   Once you accrue a weapon or 2, it’s just a matter of shooting the hell out of whatever gets in your face through 4 chapters of next to non-stop classic FPS action.  Epic Boss Battles are at the end of each of the 4 Episodes with each episode taking roughly half an hour or so to beat.  Each stage is almost indistinguishable from the last so the game does get repetitive, but once again, this is exactly how early shooters were so I take much less offense to this then I probably should. 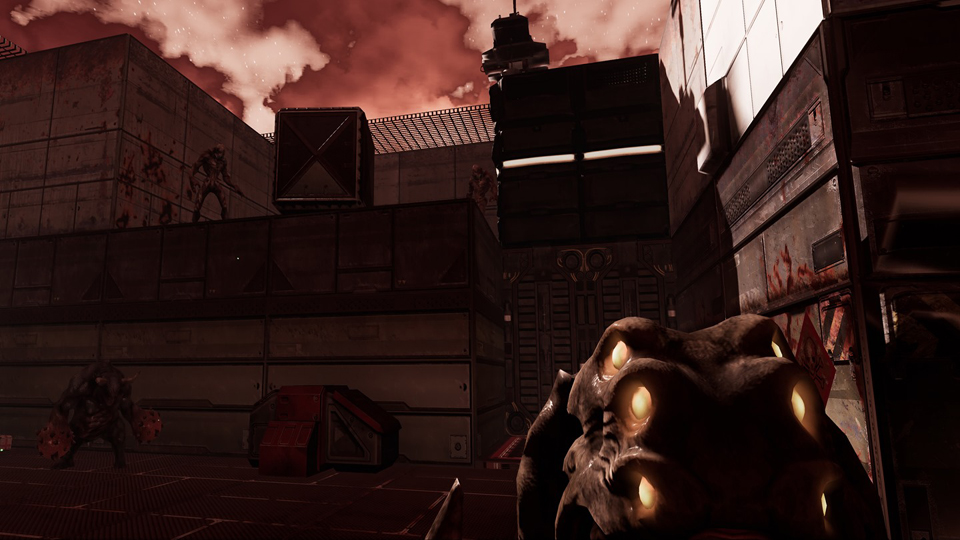 More meat for the grinder!

For myself, Dead Moon just felt like an FPS nostalgia trip back to the beginnings of the genre, but in VR.  By no means does it meet today’s standards of quality shooters, but instead embraces the shortcomings of yesteryears action titles making this feel like a fun little blast from the past.  If you have fond memories of the original Wolfenstein, Doom and Quake then this feels like the VR spiritual sequel to those titles and you’ll probably have just as much fun playing this as I did.

What would I pay? This is $13 and I would say that’s right on point.  Not one aspect of this game is going to blow anyone away, but as a whole I had a lot fun travelling through a Mars Space Station covering the walls with monster guts and sort of reliving a piece of my gaming childhood.

Mecury Aerospace Industries provided The VR Grid with a press code for this title and, regardless of this review, we thank them for that!