Eden Tomorrow is a game that many of us have been waiting for.  It’s a first-person science fiction adventure set on a distant alien world loaded with a large variety of mechanics and a lengthy campaign.  You start off in an escape pod plummeting toward the planets surface and upon crashing you are greeted by one of the planets deadly native creatures, survive and realize that you’ve lost your memory.  Thankfully you have a floating robot friend to assist you and soon enough you are off to uncover the mysteries of the planet and your own origins. 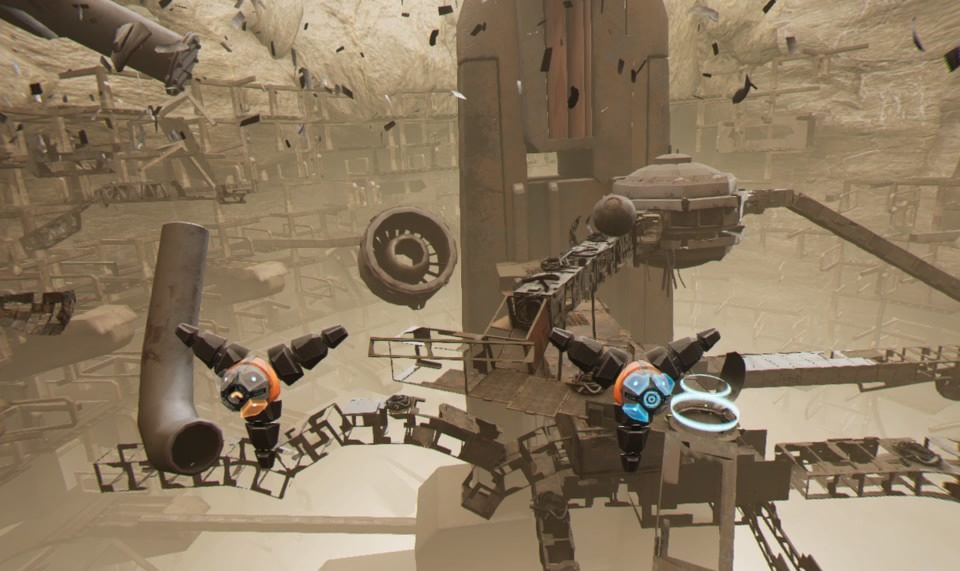 Things get strange, crazy and awesome!

This is an DS4 only affair and while some may lament the lack moves, given the differing game modes and mini-games that are spread throughout the campaign, it makes sense why that pair of tracked controllers was excluded.  The base game plays like any traditional first-person title with you walking or running around the planet-side.  You are equipped with night vision and a scanner which are used to navigate and find items needed to solve your next obstacle.  At certain points in the game you can take over your robot companion, Newton, who can fly around the map, has a shockwave blast and can grab and interact with items scattered about.  To do this, you need to find a protective shield which will allow you to swap back and forth with Newton to solve whatever is blocking your path.  You can examine plot specific items which are added to your index to refer back to anytime and besides the navigation elements, there the other mini-game modes to mix up all the wandering.

Scattered throughout the game are a variety of gameplay change ups.  One has you sliding down slanted slopes, dodging anything that could hurt you, another has you walking across narrow sections using the headset as a counterbalance.  Ledges can be crept along the sides of cliff faces, but you need to watch out for falling debris.  A hacking puzzle of sorts greets you whenever you need to access some kind of system and involves rotating a certain number of pieces so they line up but you only have a certain amount of moves to do so and is probably my favorite mechanic out of the whole lot.   A stealth mission pops up early in the game requiring to be very silent lest a nearby creature be alerted to your presence and some context sensitive events occur throughout the campaign that may require you to make a leap of faith (you can’t actually jump normally) and a few other random actions to spice things up and while all-in-all I appreciated the variety in these modes, they aren’t without issue, but I’ll get to that in a bit. 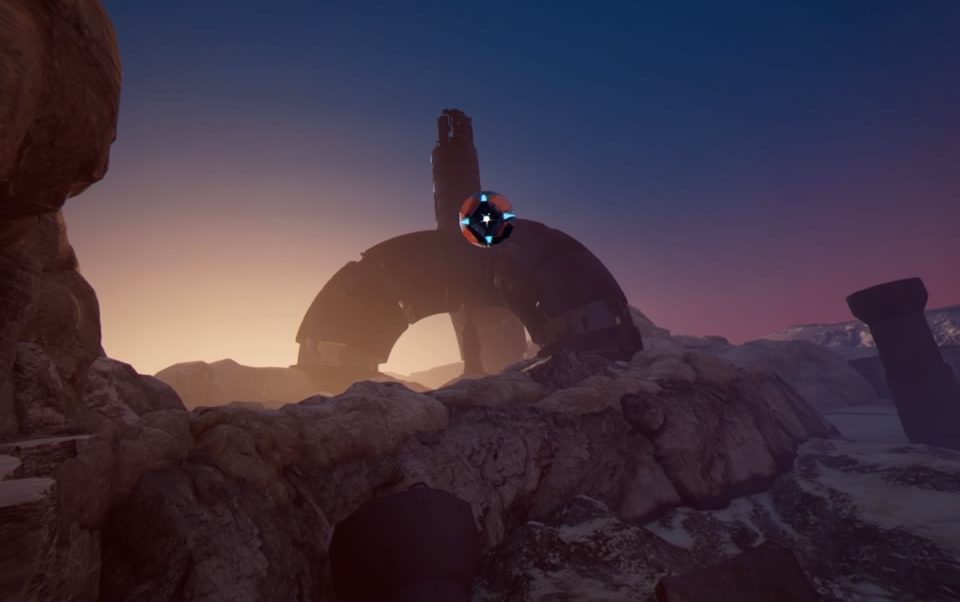 I hate this guy!

Eden Tomorrow is by far one of the best-looking games to grace the headset!  Even from the demo, which is just the opening moments of the full game, I knew we were going to be in for a visual treat and Eden did not disappoint.  The world is massive and feels…complete.  As you travel across, and below, the surface you encounter all kinds of environments from massive alien building to ancient ruins, canyons, deserts, ships and so many more.  Every time you encounter a new set piece it’s just awesome to take in.  Even though you may be walking on a small linear path, looking out across the landscape as far as the eye can see is breathtaking.  Many areas contain monolithic structures, huge, detailed animals and all manor of smaller creatures from tiny bugs to dangerous plants and sandworm type creatures.  The world of Eden Tomorrow feels like a mix of Dune, Farpoint, Prometheus and so many more crazy universes but still carries its own unique identity and I have to say, on the visual front I was impressed.  You aren’t a floating camera with hands but have a full body which I always appreciate in VR, complete with shadow effects.  The lighting is great, and I really don’t have much to complain about other then some smaller effects which didn’t quite do the job intended, but I don’t think anything in here looked bad and just about everything looks amazing! 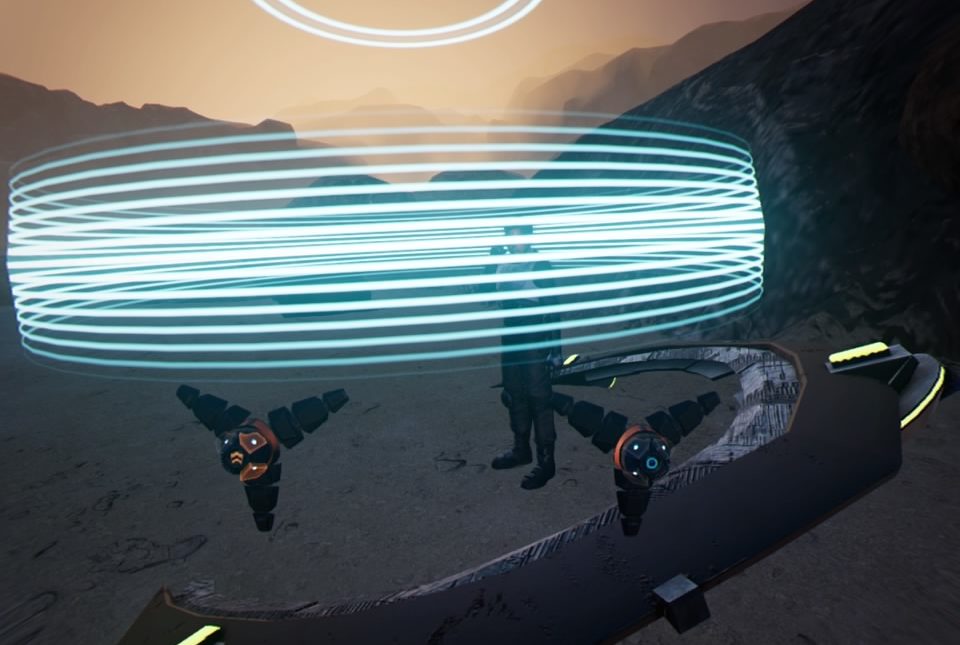 You get to cruise around as Newton while you stay safe!

Sound design is also on point with top quality effects, music and voice acting though I have a few issues in this department.  Throughout the game an epic music track are plays during the action bits and it’s great and truly epic, but this music track repeats way to often softening it’s impact and I would have liked to have seen a little more variety in the musical numbers.  The largest issue in the sound department is Newton who talks so much it ruins the narrative.  A large part of Eden Tomorrow is the unknown, you have no idea who you are, where you are, or what is going on around you and Newton is there to fill in the gaps, all the gaps, and then remind you about those gaps again and again and again.  He’s too much and needs to be dialed back a lot.  You may stumble across a recording from another survivor who explains some past events.  After hearing this Newton will proceed to repeat exactly what that recording says and then add little tidbits of info, just in case your brain was working on its own to decipher the story. Newton does not let you think for a second about the story, he tells it to you word for word, as it’s happening and this does a massive disservice to the overarching story, which is amazing, but listening to Newton’s commentary EVERYTIME ANYTHING happens reduces that stories impact significantly.

My other major issue with the game is just how often those mini-game mechanics repeat themselves, almost in a pattern.  Playing the demo showcases these and after about half hour of play, I rolled my eyes whenever most of these came up.  Balancing across a narrow beam across a gap tilting your head to counter your balance is cute mechanic and thankfully short becomes contrived as does the cliff side walking, which wasn’t bad as far as just moving to the next area goes, but the additional element of falling rocks is introduced and just feels inane as the rocks are easily visible and don’t fall until you get really close and that just gets annoying.  You’ll often hit barriers that require Newton to blast them, but he needs more power so you need to search the area for power cores, which is fine, but when you are now doing this for like the 10th time, it gets old, especially when he tells you whenever you collect all 3 that he only has 3 blasts to knock the door down, you only need one, and those 2 other stored blast just disappear by the time you hit the next barrier and he needs more power.  The monotony of these specific tasks is the killer, not the tasks themselves as they do offer gameplay outside of just constantly walking forward, but whenever I encountered a barrier that didn’t involve these tasks, I was much happier for it. 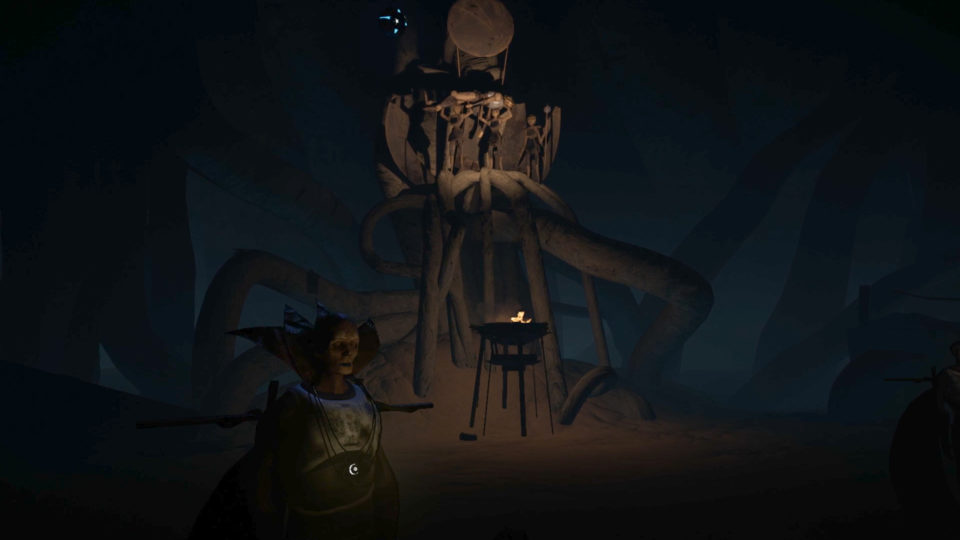 Despite my issues, Eden Tomorrow powers them through delivering an absolutely epic and enthralling tale.  The world is fully realized giving it a sense of depth many other gaming worlds lack.  The presentation alone is almost worth the price admission with some of the most impressive set pieces I have ever seen in VR.  The campaign will run you around 4 to 5 hours and feels perfect in regard to plot.  As more of the story was revealed, I couldn’t wait for the next morsel of info to chew on and see what the game was going to throw at me next.  If you are in the market for exploring a strange new world, love science fiction and enjoy well thought narrative then Eden Tomorrow delivers all that and more.

What would I pay?   I had issues for sure, but in all honesty, this could be $30 and I think I’d have been happy at that price point.  The asking price of $20 makes this a must buy just be aware of the issues I mentioned earlier

Soulpix provided The VR Grid with a press code for this title and, regardless of this title, we thank them for that!