This game was originally reviewed by The VR Grid back in 2019 with this review replacing that one, reflecting the additional content released since that original publishing.

Synth Riders has FINALLY made its way to the PlayStation headset after being out for just over 3 years on PC side of things, and just shy of 2 years on the Quest headsets, and looks to bring a wide array of music and activity to the rhythm genre as you try and hit all the notes flying your way in some fairly trippy environments 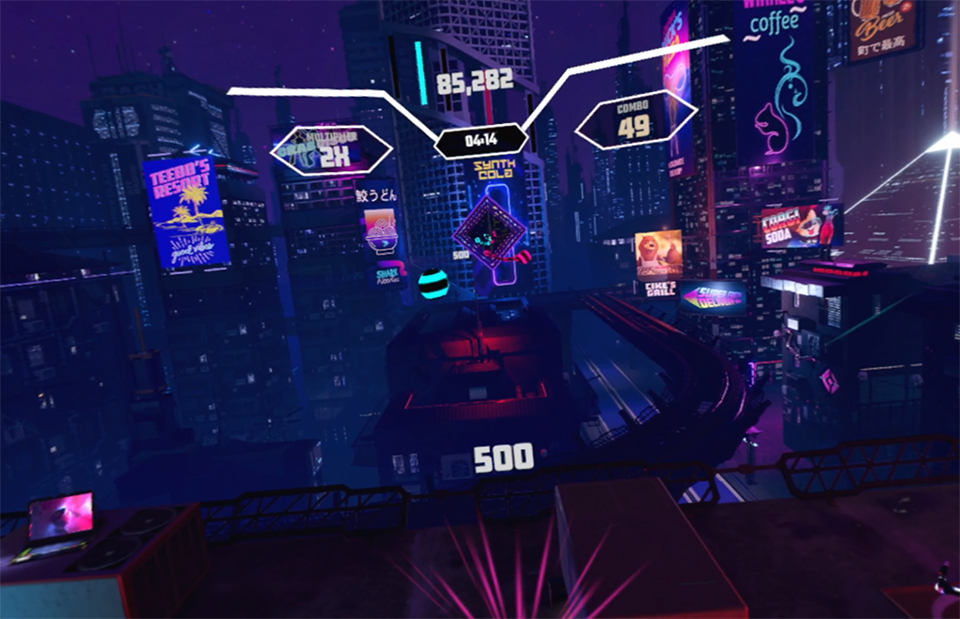 Be ready…those spheres come at you fast!

Those familiar with VR rhythm games like Box VR or Dance Collider will know exactly what’s going on here as you need to hit incoming blue & red orbs with color matched hands to get the most points.  Left is blue, Right is red with the goal being to not just connect with those spheres but to also get as close to the center of those orbs as possible for max points with 2 different base modes of play available.  The 1st is ‘Rhythm’ which plays like you would expect, hitting those orbs, riding rails and avoiding walls with the 2nd mode being ‘Force’ which plays the same as Rhythm except you need to punch the orbs to get max score.  There are 54 tracks to choose from at launch with 25 additional licensed tracks available as paid DLC giving Synth Riders an impressive collection of songs to get through.  Leaderboards are available for every single way you to choose to play whether it’s the difficulty setting, if you play in spin mode, no fail, color changing orbs and whole bunch more ensuring that if you kick ass at something, you will be recognized globally for it.  There is no campaign and everything is unlocked as soon the game is turned on (minus paid DLC), allowing for the freedom to play however and whatever you want.   Lastly, should you have some friends nearby, you can choose ‘Party’ mode which let’s you swap the headset with others allowing for some friendly, local competition. 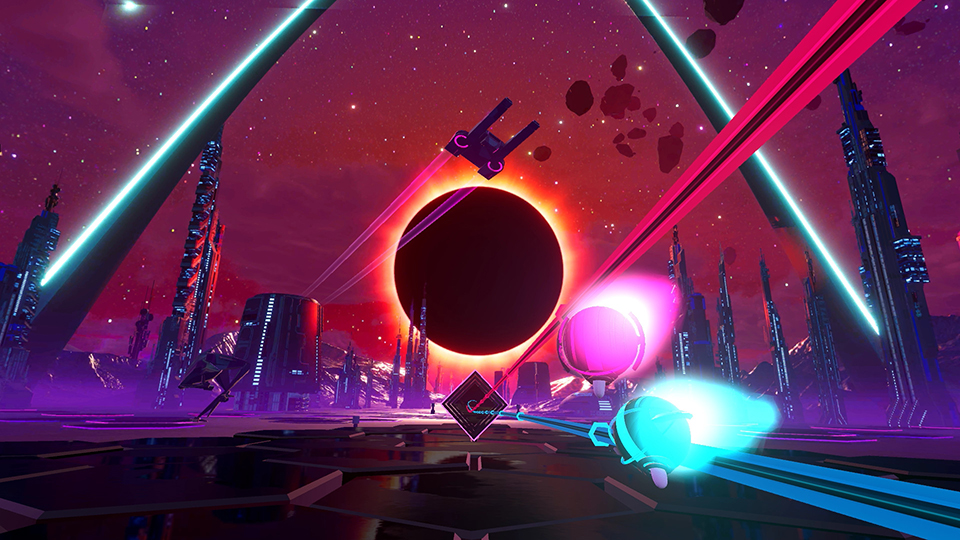 Some of the environments are mesmerizing!

The presentation her is straight up my jam as I love that retro 80’s sci-fi synthwave look.   There are 17 environments to choose from or you can select them randomly and enjoy some surreal and epic visuals.  Some stages have you moving forward through weird dystopian landscapes with monoliths in the distance while others have you remaining stationary as the orbs come towards you and while they almost all look great, I felt the stages that moved offered a little more flare and fun.  The standard mode has the orbs coming at you from directly in front of you and will occasionally appear as yellow orbs, which require both hands to hit those notes, or on rails where you need to have that matching hand ride them mixing up just how you interact with each song.  Spin mode is something special as the beat maps will come at you roughly 90 degrees in front of you but unlike other games which may have them coming at specific points in that area, Synth Riders organically has those orbs move back in forth in some impressive (and frenetic action) and it added a whole new level of fun and challenge to the game.  There is a customizable HUD that can be adjusted or removed entirely that displays your score information including combo meters and score multipliers.  Bottom line here is the game looks great and can be tailored to your visual likes or randomized if you want to keep things feeling fresh. 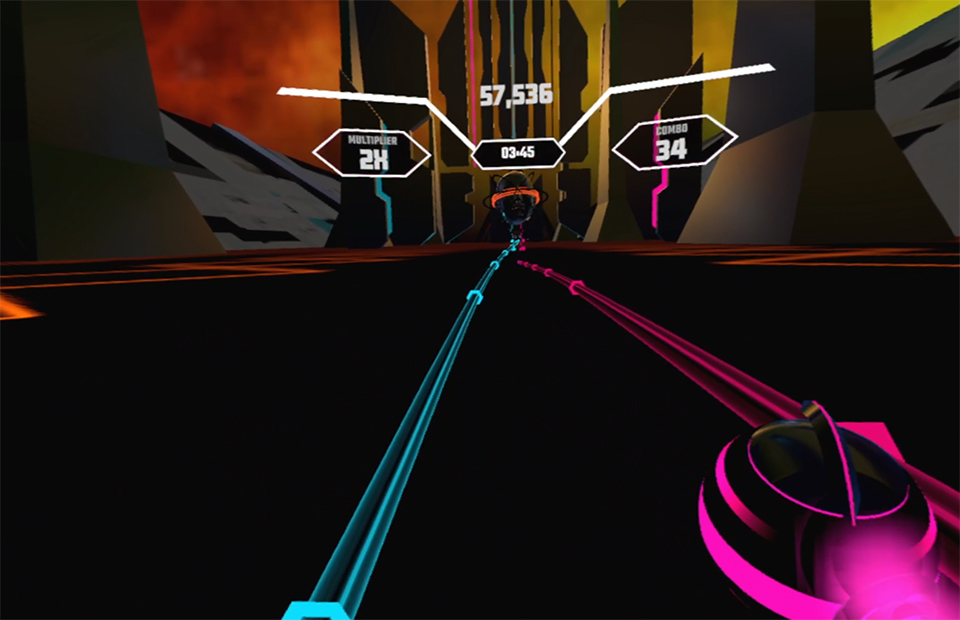 Riding these rails is harder than it looks

As I said, there are a lot of songs included with the base game and the DLC tracks give us a total of 79 musical selections which is A LOT to chew through.  Of course, not every song will be a winner based on your specific tastes (I myself did not care for the Electro-swing genre) but there’s just so much here that even when I randomized tracks and just played for awhile, I didn’t even mind when I hit those songs I didn’t care for.  Beyond the synth and swing songs are some dub-step, rock, pop, some Offspring songs, Muse, Pennywise and a host more making the total package here and eclectic one.

Synth Riders is a solid rhythm game though it did take a me an hour or so to get comfortable with the mechanics or more specifically, it took me an hour or so to find my groove.   Unlike Beat Saber, the movements in this are much more about falling into a rhythm and dance mode.  What I mean by that is I didn’t really start to have success during songs until I moved a lot more, making my arms a little more fluid and having my body move with them.  Of course, with all that movement, I started to sweat a little which was awesome as that physicality make each go just a little more personal.  Getting into a song and trying to beat a previous best typically means moving a bit faster though some songs are near impossible to react to, especially on the hardest difficulties) meaning that if you want to get good, you’ll probably have to practice to memorizes the specific patterns on a song.  All songs are also not created equal with a lot of the earlier released tracks being a little simpler in regard to their beat placement, so while I was crushing some of the ‘Synth Essentials’ stuff on Hard, heading over to the swing stuff put me back in my place.  That is fairly typical of the rhythm genre as a whole and of course, should you not want to worry about leaderboards and the pressure of scores, you can turn on no fail and a few more options that make the game more ‘casual’ friendly, though the game really is pretty inviting and easy to pick up and play.  At the time of launch, it should be noted that the multiplayer mode available on the other headsets is currently not offered in the PSVR version so minus party mode, you’ll be playing solo…at least for the foreseeable future. 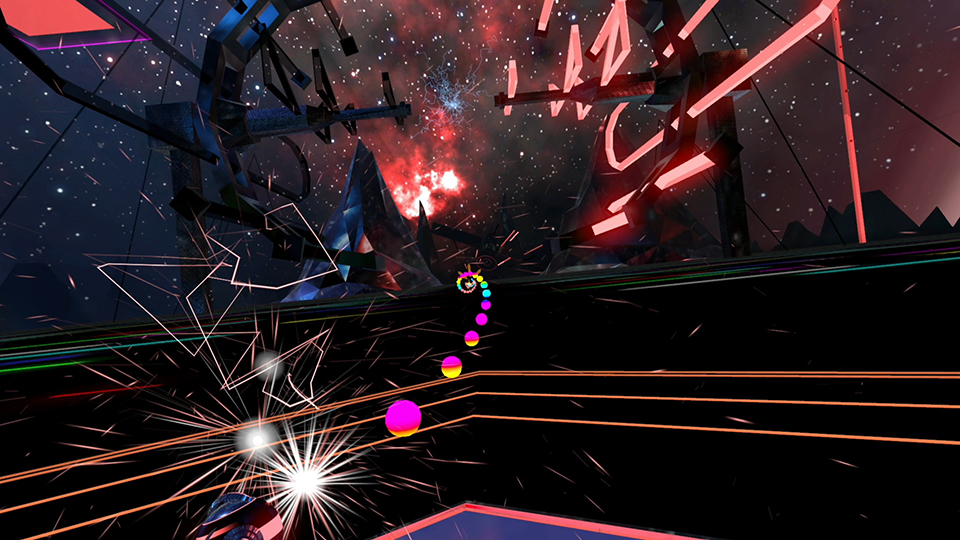 You customize many aspects of the game to your liking.

When people talk about the VR rhythm genre, the 2 games that get mentioned the most are Beat Saber and Synth Riders and there’s a good reason why as both highlight the strengths of the genre, but in different ways.  It sounds a bit silly but compared to Synth Riders, I find Beat Sabers gameplay to be bit more rigid, and what I mean by that is the motions I made with Synth Riders just felt more natural and the number of songs and how you customize just about every element in the game has this feeling more friendly.  That’s ultimately where I think Synth Riders strengths lay as its that ability to customize how you play that makes this so easy to come back too.  Pick the songs you like, make a playlist, choose your background, whatever other modifiers you want and enjoy the sick beats while getting a little workout in the process…what more could you want?

What would I pay?  The base price of $25 is a great price as that gives you over 50 songs to chew through.  If you want everything currently available in the game, that’ll put you out $53 or you can pick individual songs for $2 a pop or buy specific 5 song bundles for $8, each once again letting you choose what and how you want to play.  The licensed stuff may be a tad more expensive when compared to base games’ offerings, but all things considered I think the pricing across the board on Synth Riders is great PLUS, the developers have promised that multiplayer is coming to the PSVR version at some point down the road.

Kluge Interactive provided The VR Grid with a press code for this title and, regardless of this review, we thank them for that!