I’m not too familiar with the Warhammer universe (I’m a 40K guy myself) and this is my 1st venture into this franchise that started all the way back in 1983.  In Tempestfall you play as Lord Arcanum, a storm-magic wielding warrior tasked with dispatching the undead blight that has taken over the land. 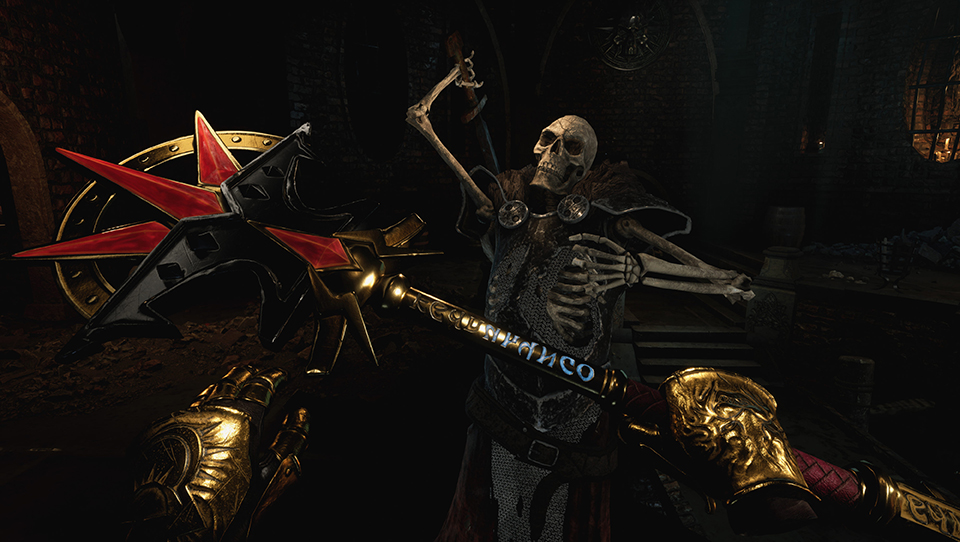 They may look deadly, but they aren’t.

From the makers of The Wizards VR series, Tempestfall follows in that franchise’s footsteps offering up a familiar game design that’s more focused on the melee than the magic.  The opening stage teaches you the basics of combat which involves some immersive melee action.  Blocking incoming attacks will be key to your success with parrying being handled by swinging you blade hard enough into the enemies incoming weapon, leaving them open to some easy blows.  Outside of the weapon physics, enemy encounters can be a little bit of a waggle fest if you let them but pick your moments and time your strikes and the close-quarters combat is rewarding.  You can even rip apart skeleton warriors with your bare hands and toss those remains into its undead fellows if your feel like mixing things up a bit.  An item wheel lets you choose your weapon or any of the other items found in the game with all of them being single-handed like a torch or soul gem which can trap souls and be tossed with explosive results.  It’s not all up close and personal as you have the ability to use lighting magic to take out foes from a distance that requires you to perform specific motions while holding the triggers, not unlike ‘The Wizards’ but in a more simplified and streamlined form.  If you aren’t fighting, you’ll be walking (or sprinting), climbing, or lifting up gates and chests with many of the climbing locations offering up a quick-travel option that brings you to the other end in mere seconds.  Items collected throughout your journey can be used to upgrade your various weapons, increasing their stats or even adding magical abilities like extra electrocution or fire damage giving the game a bit of personal feel.   Those upgrades happen where your troops have made camp and taken refuge from the undead army at their doorstep.  The 6 to 8 hour campaign is a semi-linear one offering up a grand story that takes you throughout The Realm of the Dead, though during the main story, you will find optional side quests that take you to new areas and offer up some decent loot and extend game time. 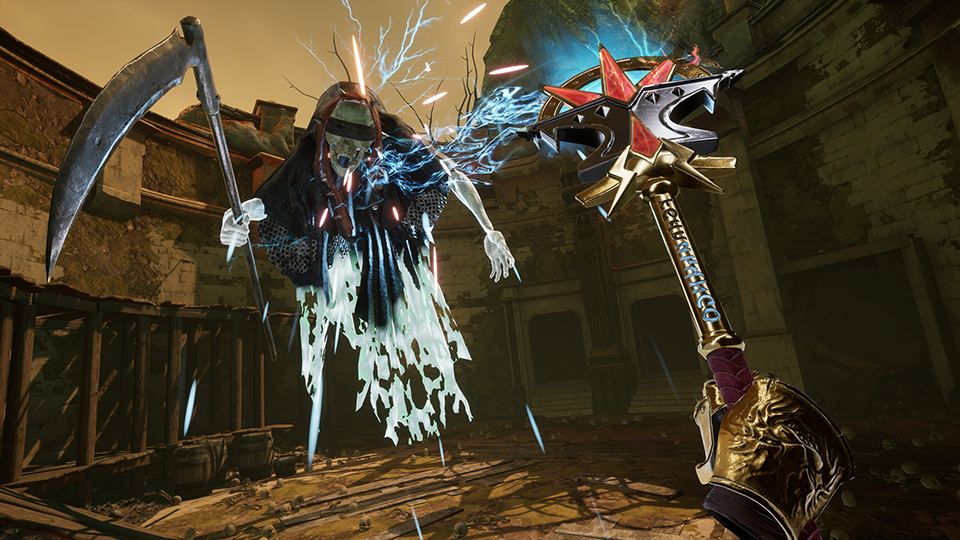 Utilizing your magic will be key to your success.

Age of Sigmar, at first, looks nothing short of stunning delivering massive set pieces in a disturbing fantasy world.  Navigating through cave systems, catacombs, city streets and many other locales gave me a lot of stop & stare moments as the game is rife with details.  Everything in Warhammer feels bleak, downtrodden, or outright broken making for a depressing world save for you and your fellow knights in their massive golden armour suits.  Storms may rage in the distance; a nearby docked ship floats up & down on rough waters with the city you travel through being peppered with monuments both small and grand in scale that make any particular set piece something to behold.  Unfortunately, that initial wow factor is soon taken over by that feeling of ‘been there, done that’, a feeling that soon propagates throughout the entire game.  Enemies (and allies) come in only a handful of forms with the base skeletons providing no challenge unless you let them get close and surround you.  Deadlier wraiths can cause a bit more trouble as they hover above the ground and slowly fly towards you but are slow enough that getting overwhelmed is never an issue.  After that you’ll face deadlier spectres, but encounters remain largely the same and when you factor in those battles with the repetitive level design, it doesn’t take too long before boredom sets in.  Toss in a decent amount of pop-in, even on max settings, and at times this game can feel like more trouble than it’s worth being pretty on the outside but lacking in any significant depth. 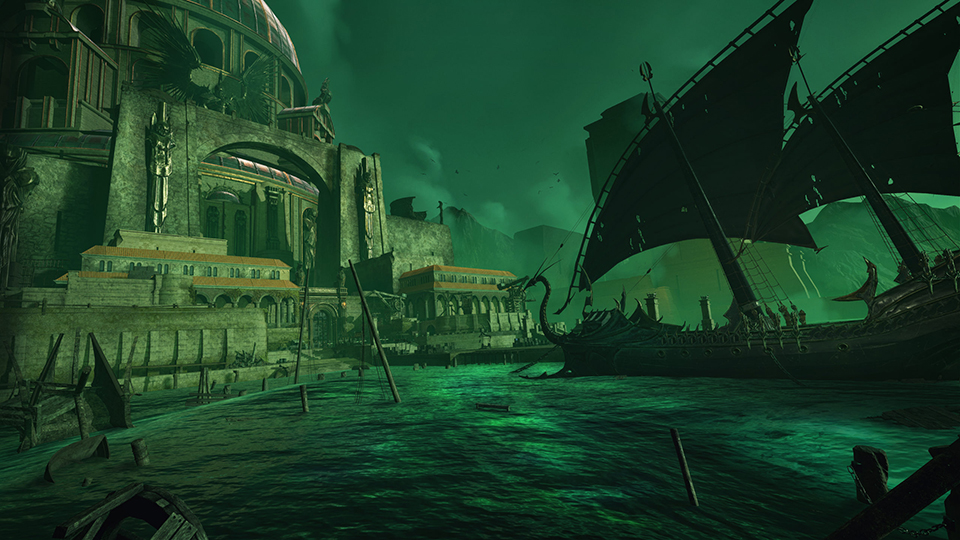 Many of the set pieces are very impressive

Sound design is on point with your protagonist always lamenting about the next encounter or commenting on the situation around him, providing not just backstory for the world, but adding a little weight to the unfolding story.  Allies carry equal amounts of bravado as they update you on whatever trouble they need your assistance with, with monsters groaning and screeching as you would expect them too.  Positional audio does the job of steering your attention in the right direction and the very dark and unnerving soundtrack that accompanies the rather dark story gives the exploration and encounters a little bit of life.

The second I started playing this, I was excited as I am a fan of the developer’s previous works, loves me some dark fantasy and was immediately impressed by what was I was looking at.  Alas, it wasn’t too long before the cracks in this games armour started to show, and I became wanting.  When encounters are explained, they feel great with a competent parry system that offers satisfying combat.  In practice it became clear that enemy AI is easily exploitable and will easily fall victim to magical attacks, which can take them out from a distance.  Encounters with skeletons became nothing but a waste of time as they offered no real challenge, even if I decided to go toe-to-toe with them, which was also unsatisfying.  The latter half of the game mixes up the enemy types but that’s more cosmetic than anything else as they behave mostly the same save for some ranged foes an increase in speed and aggression.   Side quests found during the main story offer up nothing new except new locales and more loot which are used to upgrade your weapons which just makes the encounters even easier than they were at the games onset.  What ended up happening in my play was that I was speed running the game out of pure boredom; sprinting whenever I could, exploiting poor enemy AI just to get through encounters faster and not bothering with any more side quests as I didn’t want to indulge in any more of the game loop than I had too.  It’s unfortunate as I was really looking forward to seeing what the world of Warhammer was all about but in this, I couldn’t wait until it was over 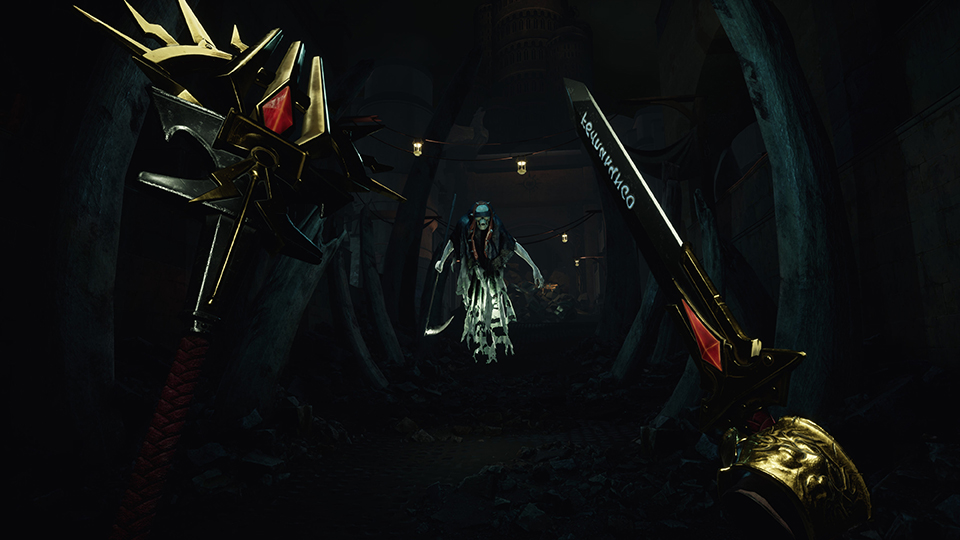 Warhammer Age of Sigmar: Tempestfall feels like a game that maybe should have stayed in development a little longer.  It has a decent combat system, a fair bit on content, an intriguing world and some top-quality presentation but once you seen what the game offers up in the 1st hour, you have pretty much seen the entirety of the experience, only in different set pieces with enemies coming in greater and greater numbers and that just wasn’t enough to keep me engaged.

What would I pay?  This is $30 US and for myself, that’s just to expensive for a game I just stopped wanting to play less than halfway through.  If you are dying to play a VR fantasy adventure game or a die-hard Warhammer fan, $20 is as high as I would go for this as I doubt most players will want to see it to its conclusion.