For those of you who have played The London Heist, Blood and Truth is going to feel instantly familiar as much of the gameplay from that short VR demo has been carried over here.  Once again, you are involved in the seedier side of things as a family member in a prominent criminal organization based in London.  Of course, a situation arises that tasks you with defeating a new player in town who want to take over London’s criminal empire and leave your family in the dust. 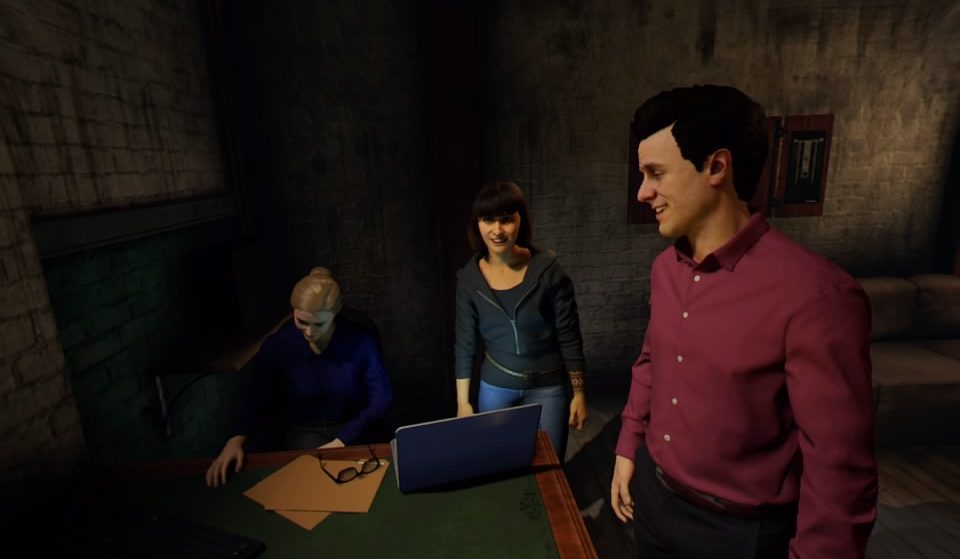 You can play this with a DS4, and it works, locking your hands into fixed position in front of you and assigning weapon switches and interactions to all the buttons on the controller, but the way to play this is with 2 Move controllers.  Improving upon its predecessor in almost every way, Blood and Truth has node-based movement, which typically is a less then stellar locomotion option in a game, but it works with the action nicely here.  Look at a spot, hit the Move button and you will slowly navigate to that spot.  What’s nice about this is that you can still shoot your weapons, toss grenades or do whatever you can as the action does not stop during these traveling moments.  One and 2-handed weapons are available here ranging from a simple pistol to machine guns, shot guns, rocket launchers and few more with the option to customize them, changing their look and adding attachments to make for a more deadly arsenal.  Your guns are strapped to your side and back and require you to grab them to arm yourself with extra ammo strapped to chest for easy reloads once you expend a clip.  Throughout the game you will have to perform a variety of tasks from finding hidden items, picking locks, playing as DJ, placing explosives, navigating security cameras and a ton more smaller tasks which help break up the gameplay nicely. 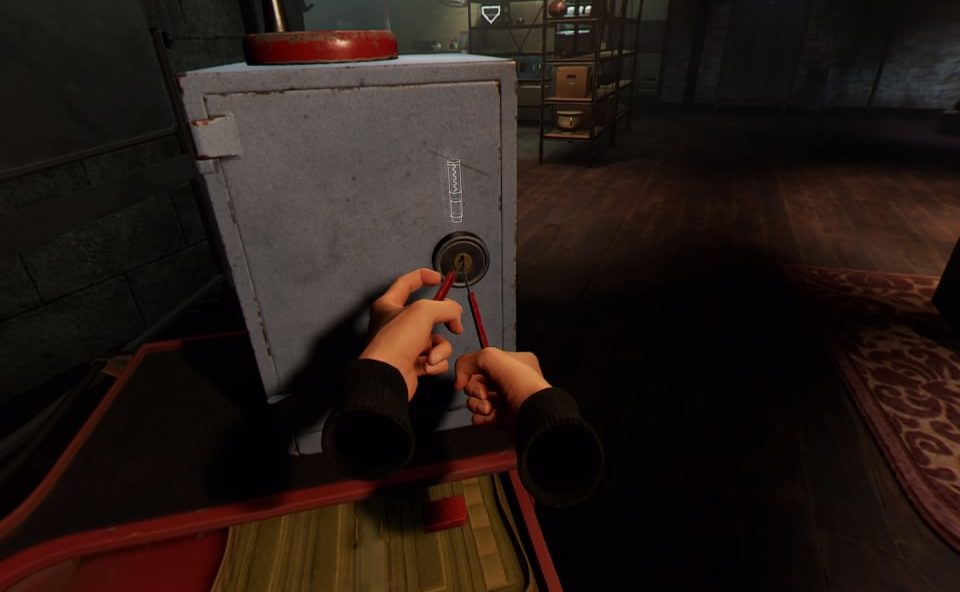 You will be doing a lot of things besides shooting bad guys.

Blood and Truth is a cinematic VR dream brought to our headsets.  The story takes place entirely from first-person perspective with you playing as Ryan Marks, who deals with a few different time periods as you flashback to your time in the military, an interrogation where you reveal events from the past by then playing through them, which is a bulk of the campaign.  While there is plenty of action in here, there is also a lot of dialogue and scripted moments where you take the time to really scrutinize the visuals and they hold up wonderfully.  The character models look great and while some do look better then others in my opinion, they all look really good as their eyes follow your head movements and the facial animations elicit a ton of emotion.  Level design is equally on par with a ton of varying locations from the war-torn desert, casino/hotel, art house and city streets as you may be involved in 1 or 2 high-speed chases.  Many stages are littered with destructible items like vases and glass bottles which add the chaos as you battle the bad guys in some hectically fun gun fights.  There are plenty more setting then those I mentioned giving Blood and Truth the feeling like you are in a Mob movie as the overarching story plays out in AAA cinematic fashion.

Keeping in line with the movie quality presentation is the top-quality voice acting which delivers in spades.  There is not one weak link in the performances be it you, your interrogator, family members or the bad guys and even when some of these non-action sequences ran long, I was never once left feeling bored or antsy.    Fret not though as the action sequences are equally on par with the 3D audio letting you know what direction enemies are coming at you from as well.  Every gun pops with a satisfying explosion of sound and even just messing with items scattered around showcases a sense of audio polish that we just don’t get enough of in our headsets.   It should be noted that, like The London Heist, there is a fair bit of ‘adult’ language as F-bombs are thrown around with reckless abandon. 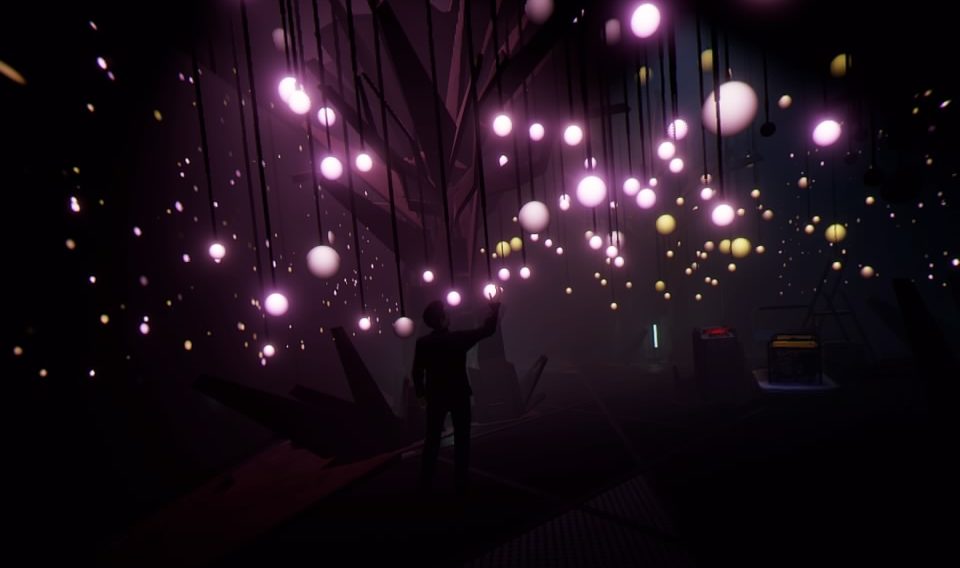 There are some truly breath taking moments in the game.

The campaign should run you in the 5 to 6-hour mark with it maybe taking a little longer on the harder difficulty as you might die a few extra times.  If you do die, there is a very nice checkpoint system in place that starts you off almost exactly were you failed.  Hidden items and targets to shoot as well as some clever interactions as well are scattered throughout the game offering a reason to replay a stage as some of them can be very hard to get on your 1st try.  One reason for this is you can’t travel back to a previous node, meaning if you saw an item or something you missed, you need play through again as you can’t backtrack, which is a little annoying.   This is further exacerbated by the other actions you’ll perform like when your character is running through a hotel, taking a leap of faith on a rooftop or climbing through vents.  All those actions (and more) work near flawlessly further hammering home just how much ‘awesome’ this game throws your way.  Sure, it’s sort of on the rails and while many will bemoan the lack of full locomotion, but the movement system works wonderfully here and allows you to focus on the action.  I did run into the occasional tracking issue, typically when trying to grab a clip and reload my weapon while getting shot as and it’s these busy scenes when the Moves falter a bit, but they never killed me, just had me fumbling a little more then would be ideal and for the most part, I found the tracking to be spot on. 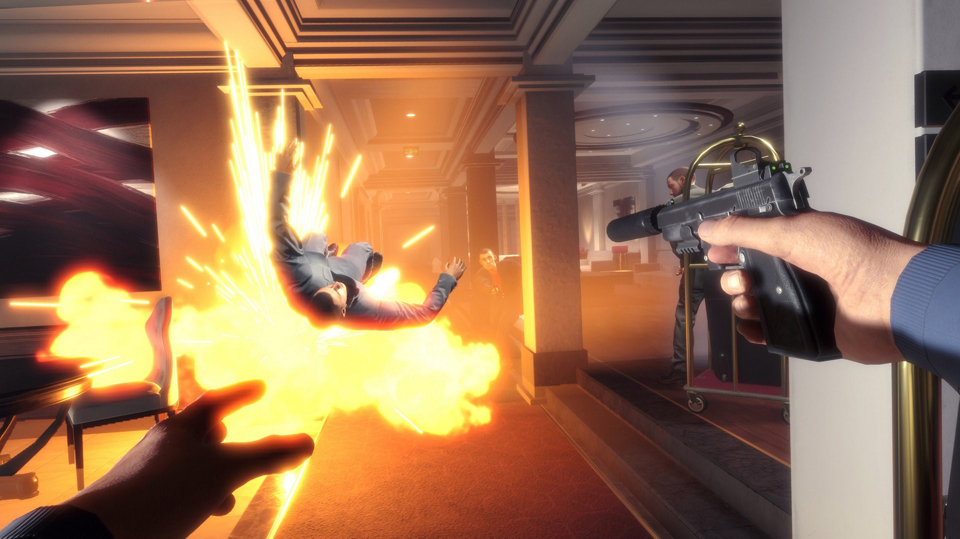 There is plenty of action in here!

The name of the game here is action and while there are some large narrative bits, they just serve to set up the plot and bring you the next action sequence.  There are some stealth missions in here and a slow-motion mechanic as well which you can trigger on your own accord and unleash all hell as you can still move at normal speed.  Add in some fun hand gestures, gun flips, and other cute little interactions like bringing a grenade to your mouth and pulling the pin out making Blood and Truth a game that just keeps on giving.  When you think you have seen all the game has to offer, the next stages adds something new, and then the next one after that does the same and it’s the constant feeling of bigger and better that purveys the entire campaign and from start to finish…I was enthralled.

What would I pay?  The $40 asking price puts this in the higher end of PSVR titles and is worth every penny.  Blood and Truth is the reason why many of us bought a PSVR headset, we just didn’t know it then and is a wonderful showcase title for those looking for some intense action.