I don’t think anyone expected a sequel to 2017’s Dick Wilde, the 2nd game to support the Aim controller after the amazing Farpoint.  Dick Wilde opted for a smaller experience with it being a stationary wave shooter with a variety of cartoonish animals all out to get you.  Dick Wilde above anything else was an extremely challenging game that pushed the players abilities to the max and then still delivered punishing wave after punishing wave.  Dick Wilde 2 has changed the formula up a bit by now being an on-the-rails shooter that still has you facing hordes of animals, only now you can do so alone or with a friend thanks to some online co-op. 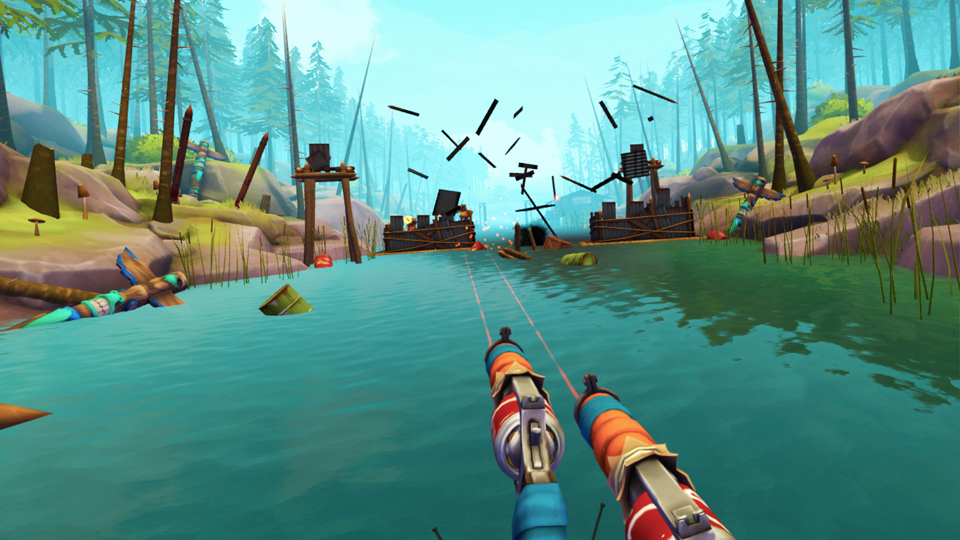 Floating down a river has never been more fun!

The Move controllers or the aim are supported with each being balanced a little differently lest the dual Moves be the clear way to go.  If you decide to dual wield, each weapon can be customized through in-game purchases once you have unlocked them and have enough to funds to purchase them.  You can choose a different weapon for each hand at the start of each level and at checkpoints within each stage.  All the same features apply to the Aim controller but now you only have 1 weapon so when using the singular weapon, you get a little more firepower.  Initially you only have 3 stages to choose from with plenty more being unlocked once you progress through the campaign and shoot the Golden Carps.  Each stage has multiple paths so to get all the carps in stage, you’ll have to play through them at least twice and if you miss shooting one, more then that.  Soon enough weapon specific missions are also unlocked which, when completed, add that weapon to your arsenal.  Each of the 3 main stages has a Boss battle which must be beaten to unlock the next series of levels.  Each stage is littered with enemies and debris, which must be taken out lest either hit you and cause damage to you though thanks to the room scale tracking, you can dodge things that get a little to close.  For everything you destroy, you get cash which can be spent at the checkpoints to either purchase new weapons or buy health or buffs like improved special attacks, increasing your chance of critical hits and few others.  Every stage also has a 3-star system based upon a bunch of factors like accuracy and number of items and enemies killed.  For the most part, each element in here is stock, but when looked at as a whole Dick Wilde 2 offers a wide variety of modes, weapons and content that makes for a very complete package. 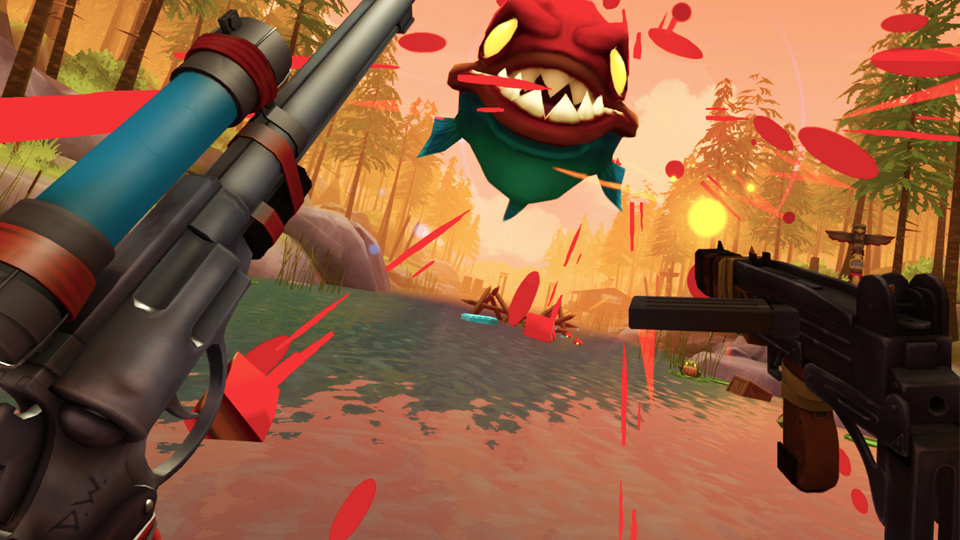 The enemies get up close and personal if you let them.

Perhaps the most important feature that separates DW2 from any other wave-shooter type games is the co-op multiplayer.  Tackling the missions with a pal is always the best way to go as you can both cover each other when things get hectic and it also makes things a bit easier with double the eyes on the prize.  In this mode, you see you’re your ally’s as a floating head with his weapon floating in front him and whatever hat he may have unlocked and equipped from his own play.  One minor gripe is that there is currently no in-game chat option meaning you’ll have to party up to communicate, though apparently this feature will be coming down the road.

Like its predecessor, Dick Wilde 2 looks cartoonish though has dialed back the cell-shaded look in the 1st opting for a more traditional 3D-art style.  A lot of care has gone into making DW2 look very polished with everything looking crisp and clean.  Colors are vibrant and the variety in the stages from simple river sides to sewers and Carnival areas makes for a game that feels fresh a lot longer then you might think.  The weapons are both fictional and real and as you unlock more and more, they tend to get more outlandish.  Animals are all mutated versions of whatever it is they are based upon so whether it’s crazed piranhas, birds armed with torpedo’s, rats that launch plasma blasts or any other crazed mutant, the variety offered always keeps you on your toes.  Enemies explode into bloody chunks when destroyed and each stage ends with a huge boss battle.  The main menu is a mini-sandbox area that let’s you launch darts at anything around you and I really can’t find any faults in the visual department as it delivers everything it needs to and more. 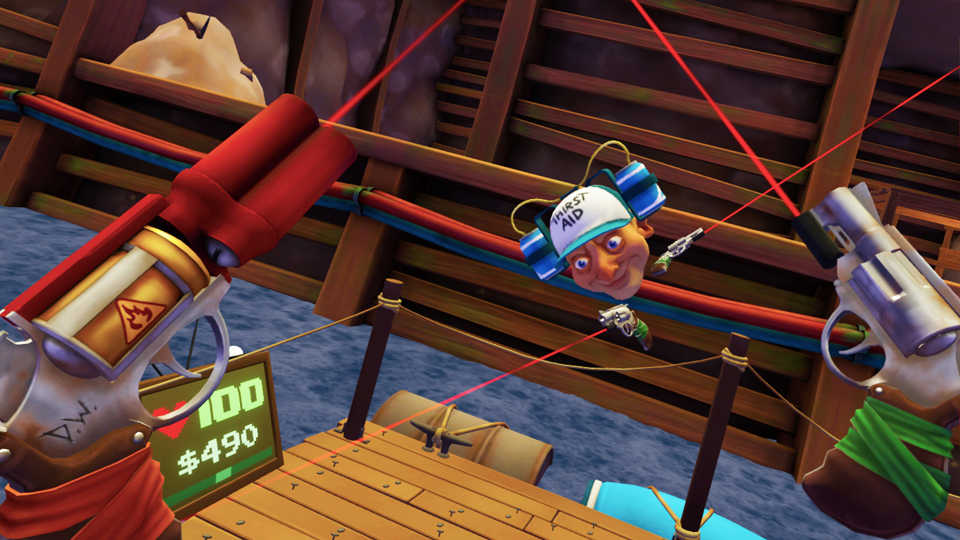 Play alone, or with a creepy looking friend!

The music is a mixture on banjo tunes and other “hillbilly-esque” music and fits wonderfully with slowly floating down a river shooting all manner of critters.  Many animals give audible clues that they are attacking you and when things get hectic, they almost never give you a break.   Dick greets you at every checkpoint and throws a couple one-liners your way though these repeat often once you play for a bit, but they never really annoyed me as they are short and sweet.

For what Dick Wilde 2 brings to the table, I really can’t find too much to complain about.  The campaign is lengthy and while it is easier then the original, especially when playing co-op, there is still plenty of challenge offered here.  There are 16-weapons in total along with your special attack, which can be used once your special meter fills up, and some environmental explosives to help you out as well.  Some levels have gates that require you to shoot numbers in order to open them up and some creatures latch onto your ship causing extra damage if you don’t notice them.  Each level contains multiple paths to unlock additional levels giving you multiple reasons to revisit levels you have already beaten, and they are all relatively short so while death is disappointing, it’s not to difficult to dive back in and try again.  I called those breaks in the stage where you can purchase weapons and upgrades checkpoints, but that’s not what they are as dying at any point in the mission ends that mission and I think an easier mode where these areas acted as checkpoints to continue from in case you died might let players with lesser skills still enjoy the game.  Really though, that’s a minor gripe and Dick Wilde really delivers where it needs too. 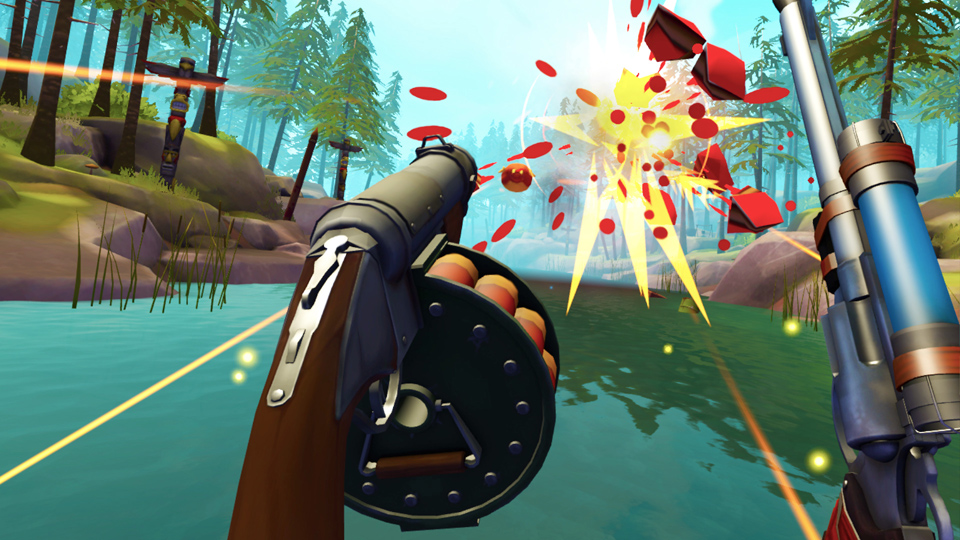 The on-the-rails nature of Dick Wilde freshens up what it is still at it’s core, a wave shooter but the online co-op makes this one of the few games that let’s you a pal combat a campaign together.  For that reason alone, I recommend Dick Wilde to anyone looking to play some online and with the options for Aim or Move controllers, you can play how you want.  If you like some challenge, are looking to shoot a ton of mutated critters and love polished wave shooters, they don’t get much better then Dick Wilde 2

What would I pay? The $20 asking price is great.  Dick Wilde 2 is a polished wave shooter that offers up some really fun gameplay elements and while it might not be quite as serious as Blasters of the Universe or Space Pirate Trainer, I’d put it on equal footing with those classics and the co-op might even push it past those gems.

PlayStack  provided The VR Grid with a press code for this title and, regardless of this review, we thank them for that!