Settlers of Catan, for those who don’t know, is a tabletop board game that pits a few people against each other in settling an island.  To settle you need to build towns, roads and acquire resources from lucky rolls of the die or trading with others.  Catan VR is that game brought to our headsets as you face off against AI or human opponents. 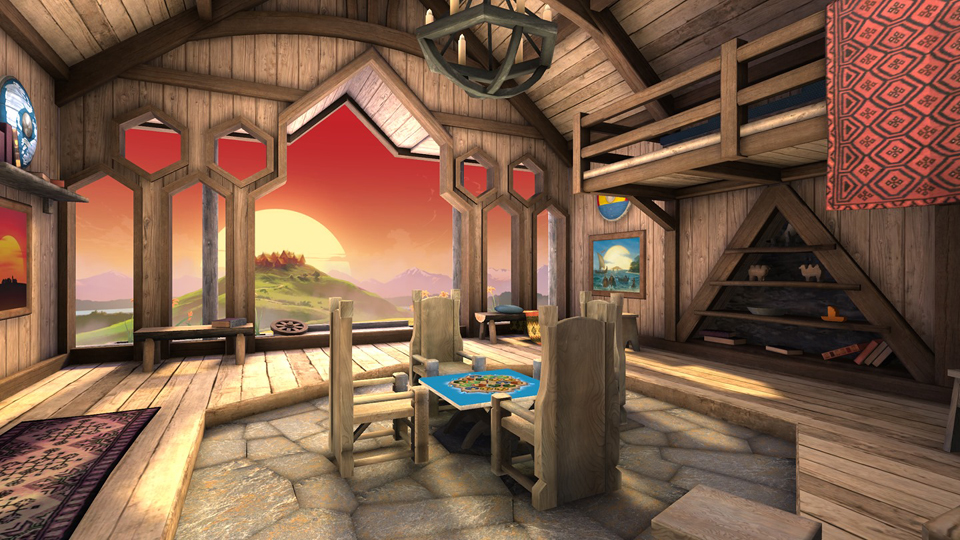 There are a fair bit of rules in Catan and while I will touch on them in this review, I’m not going to delve to deep as this has a fair bit of depth.  Moves allow you to select actions with your virtual hands from a menu to your side, which can be moved around to your liking.  If you don’t have the Moves, head tracking is used, removing your hands from play and forcing you to look around to make choices which did start to hurt my neck after awhile.  The map is divided into hexagonal sections with paths running in between them.  Each section designates a resource (brick, lumber, wool, grain, and ore)  or desert areas and has an assigned number and should you have a town touching that section and the dice roll matches that assigned number, you get that resource, the more settlements you having touching that hex, the more you get.  Modifiers are available depending upon where your settlements are located and cards you accrue in the game, both of which can give you greater resources with the cards adding a few more variables.  Building roads and towns along with upgrades all cost resources which you can also get by trading with others or to the bank, which gives you a default 4:1 ratio making them a desperate choice unless you are hemorrhaging a specific resource.  Each town or city you make as well as who has the longest road or largest army, used by playing the most Knight cards, all count for points with the first person to reach 10 points winning the game. 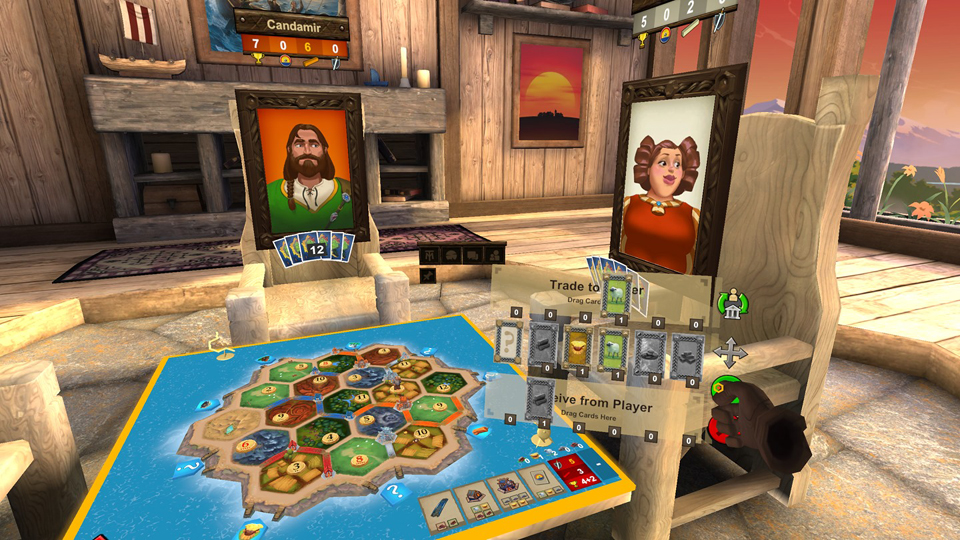 The play space seems like a quiet corner of a medieval pub or an Asian inspired setting with you and your opponents all sitting around the square map before you with the Catan sunset or cool floating islands displayed outside a nearby window. The background visuals are fine and either background does the job with an extra option to even change up the pictures on the walls around you, which was a unique touch.  All your AI foes sit in chairs and look like picture frames with animated characters reacting to the game.  Human players can choose their own avatar mask which makes things a little more personal.  The map is lightly animated as actions are performed with other ambient effects like birds flying over the map or the swirling of the ocean making Catan feel alive.  Your menu, featuring what cards you have and other options is to the right by default, or where you decide to move it, and is navigated by pointing at what you want to touch and selecting it, as if there was a laser pointer on the end of your finger.  It’s very clean with the focus clearly on the gameplay.

Besides the lengthy, but necessary, video tutorial, the only voice you’ll hear in the game is the grunts and musing noises of your AI opponents who don’t speak.  A light harp laden musical track plays in the background with other effects triggering as you perform specific in-game actions.  Should you play against others, voice chat is in the game allowing you to converse with the competition, or should you not want the distraction, can be turned off, letting you play in silence. 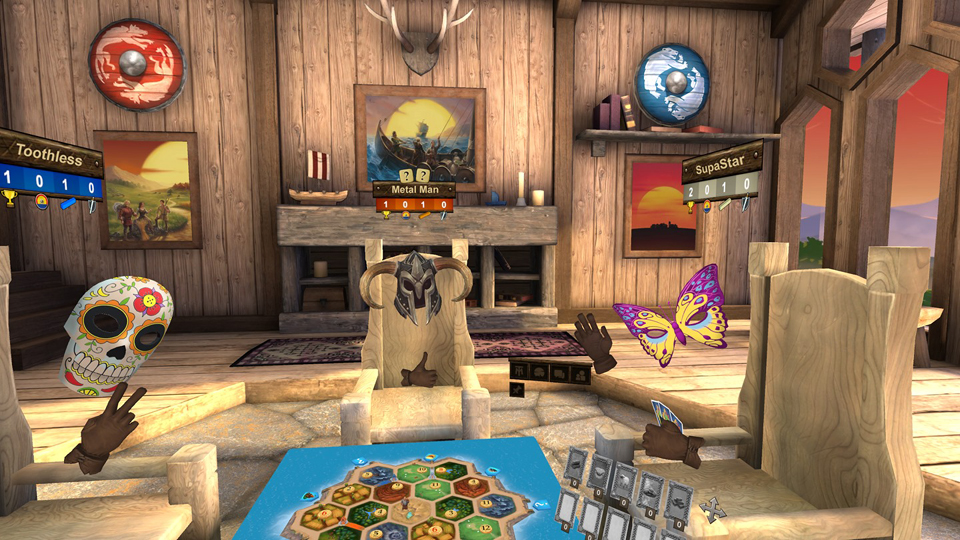 Catan VR can be played alone with you facing 2 or 3 other AI players which is fine, but I found that they tended to not trade with you if another AI character was willing to trade,  making it seem a little unfair as it just seems like all AI players are working together to beat you.  Multiplayer is the way to go and while the store page says you can play with friends, there is no option to do so currently meaning if you want to play with someone specific, you’ll have try and join up randomly and hope for the best though thankfully this is cross-platform with other headsets, increasing the player-base.  Another issue with Catan is the longevity of a single game which can take anywhere from 30 min playing against the AI to 2 hours or more with people depending upon how serious everyone is taking the game.  Because of that time requirement, finding players who stick around for the whole game’s length could be an issue though if someone does leave, the game continues with the missing player just being skipped over every round. 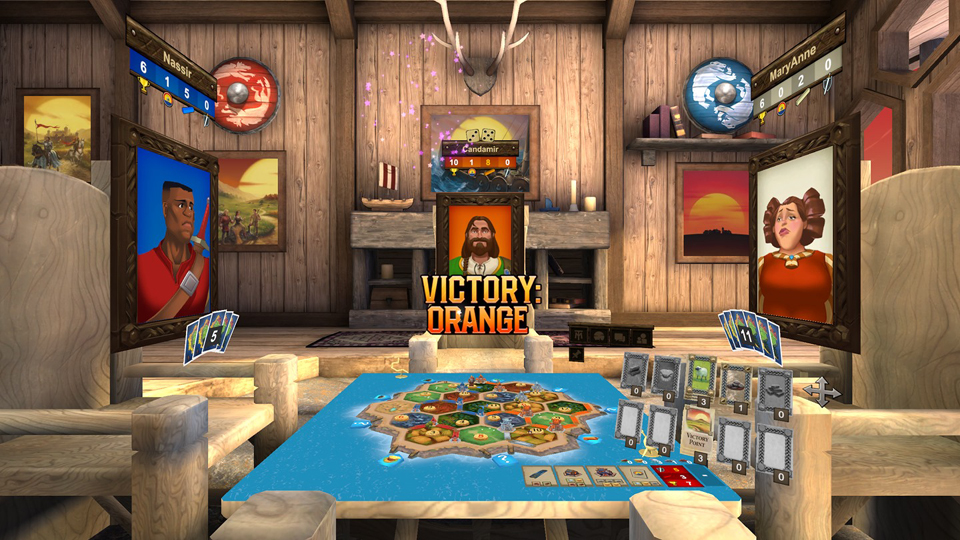 It would be nice to see this…I have yet too.

I wasn’t really familiar with Catan before I played this and while I enjoyed my time in the game, it was also a little frustrating.  Playing against the AI felt unfair with their gang mentality, but I also encountered issues where dice rolls were so poorly in my favor that winning was impossible.  Multiplayer is better and thanks to cross-platform play, finding a match wasn’t to difficult thanks to a dedicated player base.  Catan is full of nuances and strategy that will take more then a few rounds to figure out.  Factor in the human element of making friends and enemies, possibly screwing up future resource trades gives this a very precarious social element.  Even the single player component was enjoyable, though that familiarity with Catan’s subtleties is needed to really stay competitive with the AI players.  Fans of tabletop games should pull a ton out of this as this is a great representation of one of the most popular board games ever made.

What would I pay?  This is only $15 and I think that’s a pretty solid deal if you have any interest in tabletops.  Like Werewolves Within or Mini Mech Mayhem this a great social game and great way to get together with others from around the world have some fun.

Experiment 7 provided The VR Grid with a press code for this title and, regardless of this review, we thank them for that!