I honestly feel bad for VR wave shooters now as I feel that genre is reaching a saturation point that may just cause people to ignore them entirely.  It’s at a point now when entries in this genre need to stand out or be instantly blacklisted for being ‘just another wave shooter’ so it’s up to devs to find innovative ways separate themselves in this very crowded VR genre.  Sadly, Ghosts in the Toybox does little in the way of originality and is almost instantly forgettable, even after playing through it twice. 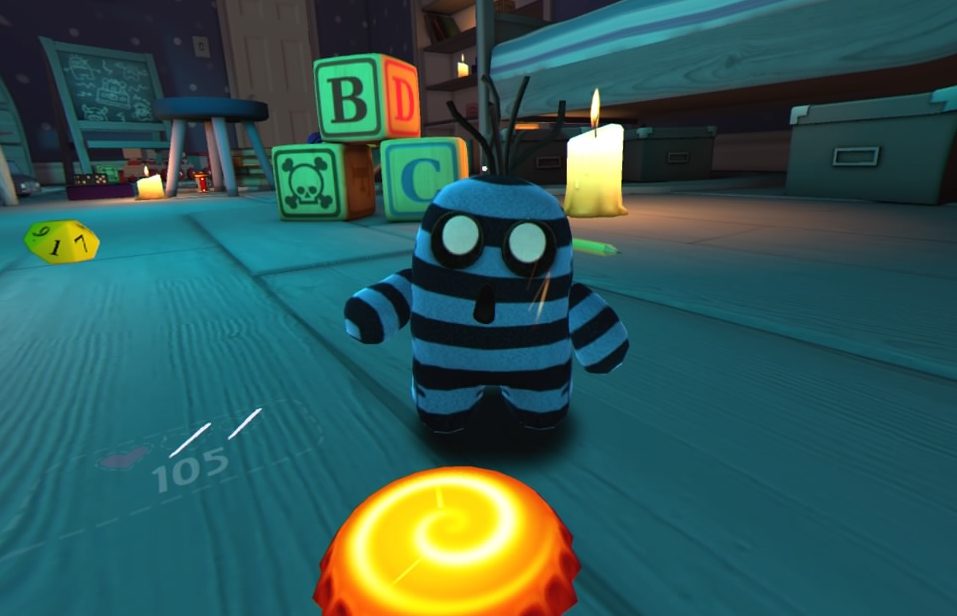 I’m about to put a cap in his face!

What they have done right is offer up control with either the dual shock or a move controller.  With the DS4, it controls by mapping your controller to the in-game weapon you have been given and plays like Farpoint.  Move is the same and you only get one single handed weapon, so you’re only going to need 1 controller.  Throughout the campaign you are given pre-selected weapons which can be shot with a button press or hold the trigger (or X) down to power up and release a more powerful, or straight up different type of shot.  There is navigation in the game, but its limited to predetermined spots and only available after you finish off the current wave and it doesn’t work that well.

As far as I could tell, there is no story, just hit start and you are thrown into the game.  From here you are given preselected weapons (like a bottle cap, or dart gun) and go.  Minus one part of one stage, the action takes place entirely in front of you, so you can basically just wait for the enemies to show up and turn ever so slightly right or left.  There are currently 4 stages available and each one won’t take more than 10 minutes.  There are 2 difficulty options offered up, but don’t change the difficulty, just the amount of health you have.  Scattered throughout the levels are some hidden objects you can get for bonus points and certain points in certain stages have multiple paths to choose from, which is mainly needed to find those collectables and give you something a little different to do on your second playthrough. 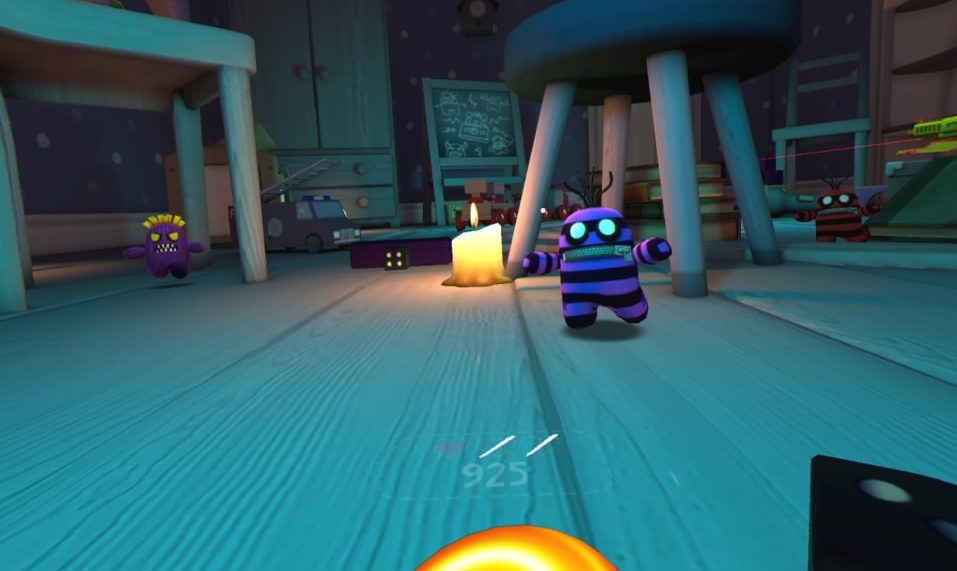 The comparison to zombies undeniable(ly cute!)

There is an undeniable charm in most of the visuals here.  The bulk of the enemies are just these little stuffed dudes that have a fair bit of variety to their appearance and look good.  The color palette used is bright and the world displayed feels very vibrant and alive.  The levels look on par as well and take you through 4 rooms in the house and it’s always fun to be tiny and seeing household objects blown up to giant proportions. Bosses offer up a little more variety in the form of some larger toys and look just as good.  Overall the graphics were probably the best of the game and were fun to watch.  I did enjoy some of the battle cries bellowed by the little dudes as they ran at you and that combined with their appearance was comical.  Everything else sounds as it should and nothing annoyed so no real complaints in the audio department. 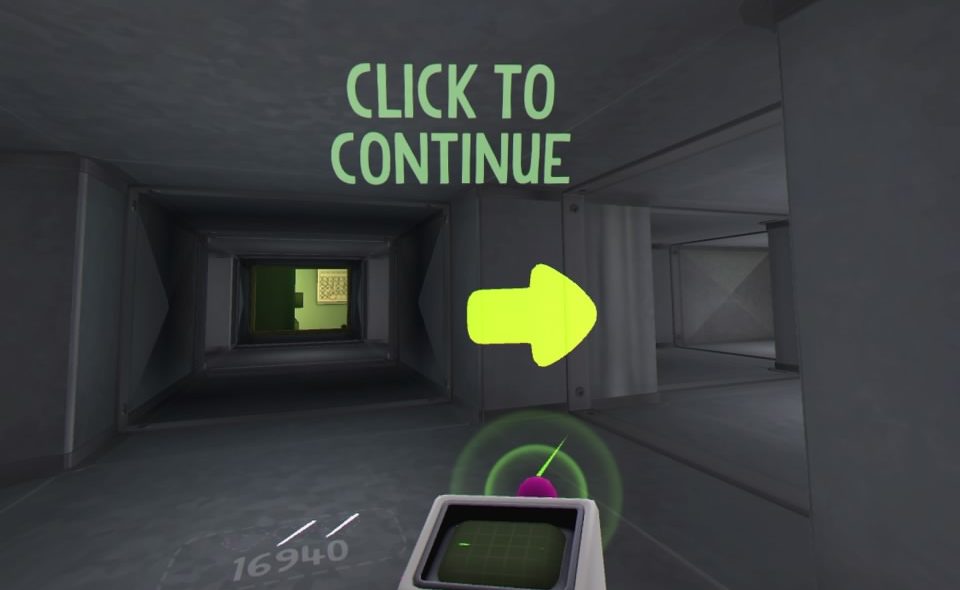 You are going to be clicking to continue a lot, and it’s not going to work!

The game has its shortcomings and as mentioned, the complete lack of story is one them.  The 2nd is that each stage is broken up by an arrow you have to look at and trigger, which is way easier said than done.  I would look at the arrow, shoot and… nothing, repeat and… nothing, then I would just mash buttons until the game let me proceed.  It’s absolutely maddening to be told where to go and what to do and not be able to do it through not fault of my own.  Button mashing got me through, but considering how absolutely rudimentary this is, I’m baffled as to why it “works” this way.  The game is way to easy, on either mode, as long as you are focused on the incoming enemies and offers little in the way of challenge and less in reward.  Weapons are pre-selected at every stage, so for no reason other than just because, you just lose whatever you are wielding so you can wield something else, shoehorning in slightly different shooting mechanics that, except for the grappling hook, all pretty much feel the same anyways.

I’m making the bold assumption here that this only part 1 of an on-going series which would be fine save for a few issues.  The 1st is that there is no discernible story, so looking forward to the next chapter really just means playing more of the same game in new levels.  Secondly is that the game just ends, not even on any type of cliff-hanger, but just ends and brings you back the menu.  I thought maybe I had to play through on hard to see a different ending but nope, beat it and was brought back to the menu.  Lastly is the fact that I am unsure at this time if the price of the next chapter is included with this or if it will be a separate purchase which in this case is a huge factor as the current content will last you around 30 min on one playthrough. 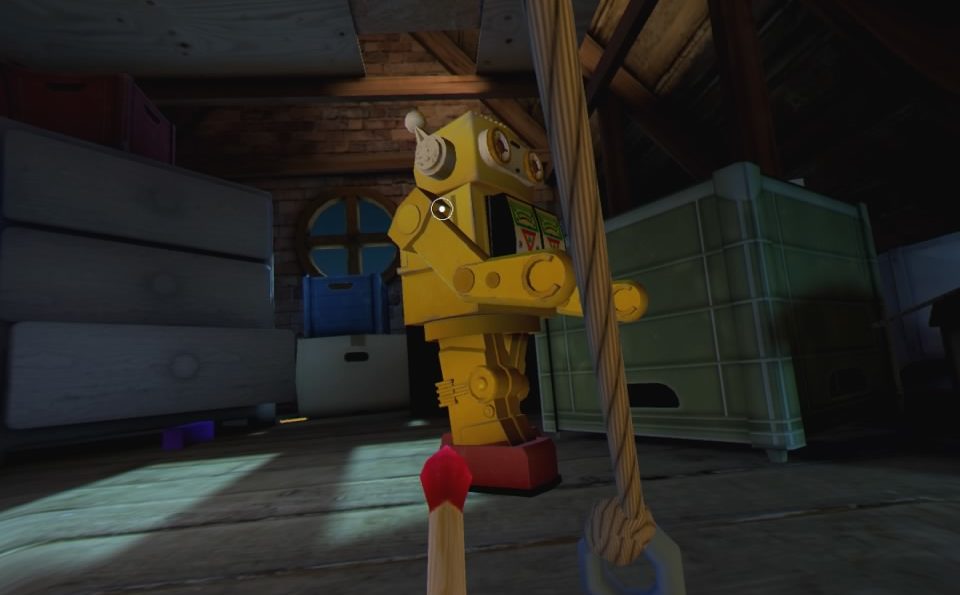 The boss battles are just as challenging as the rest of the game…as in they aren’t.

Viewpoint games was on to something here, but it pretty much fails in execution and they decided to double on that failure by charging way too much for a very shallow game.  There are online leaderboards available for “Arcade Mode’ but it’s the exact same stages as the campaign so whoop dee do…  This isn’t awful, but it’s by no means anything special either and with the VR wave shooting genre only getting more crowded almost every other week, there are just better options to spend your money on.

What would I pay? $5 is as high as I would go right now for this.  If future chapters will be released as free DLC than that number will probably go up.  That said, it currently only offers at most, an hour of entertainment value and considering how many more competent wave shooter options we have, this one is completely forgettable.