One of the most recent gaming genres to come to fruition has been the Battle Royale, which may have you alone, or with a team, trying survive against all others and become the last survivors as the map steadily shrinks, herding all participants into one big showdown.  With VR however, we have seen a lack of these types of games thanks in large part to the lack of player base and divided attention amongst other games and experiences.  We have had a few Battle Royale type games with some fairing better than others, but POPULATION ONE looks to deliver the “classic” team-based experience by pitting 18 players, broken up into teams of 3, against each other. 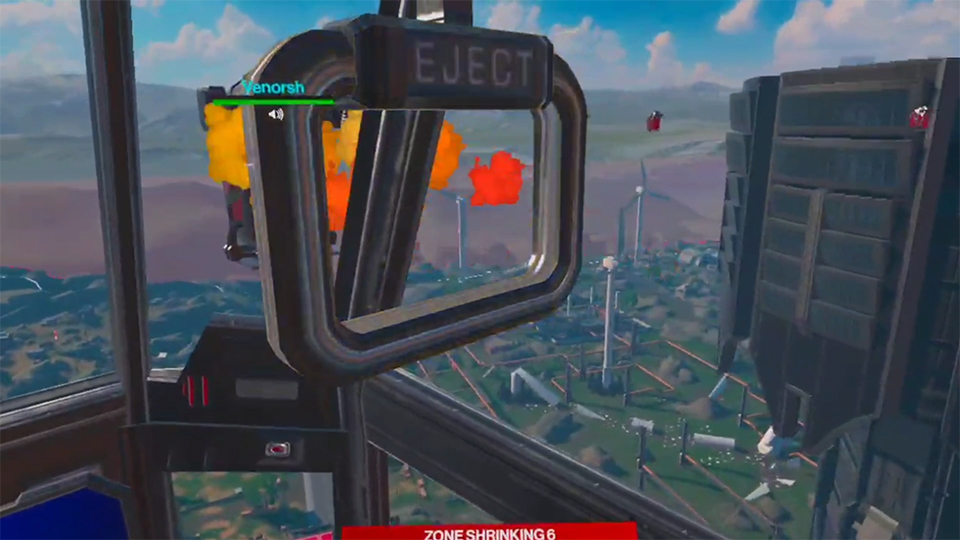 Every match start is pretty epic!

We all know how the first-person shooter side of things controls on the Rift or Quest so let’s get into what this game does different.  When you start any match up, you can practice until the lobby fills up proper and puts you into the actual ranked game.  From here you start on a platform high above the map and can either enter a pod which will shoot you high in the air and send you across the play area quickly or you can just jump and glide down by simply out stretching your arms. That gliding mechanic is pivotal in not just landing but navigating the environment as you can also climb any surface so you’ll often find yourself scaling heights and gliding from building to building which is much faster way of moving then the singular walk speed.  You’ll start each match empty-handed and must search for randomly placed weapons and items wherever you go.  The weapons are fairy stock for a shooter of this type with pistols, shotguns and machine guns all at your disposal and each opts for an arcade/sim mix of placing the ammo clip into the gun followed by cocking it or loading the next round.  It’s a good system but just make sure you pay attention to your weapon as I found myself on more than a few occasions entering a fight with my gun having no loaded ammo, but that’s on me, not the game.  Shields can be picked up as well as back pack upgrades which allow you to carry more weapons and items with the last element of the game being the ability to craft walls and floors allowing for some makeshift bases, a mechanic very similar to the one available in Fortnite.  These panels can’t absorb a ton of damage but could still easily give you the edge in a firefight and take mere seconds to setup should you want to hunker down and wait for the enemy to come to you or need some quick cover.  To switch to what’s in your hands, you have an accessible, upgradable backpack which is nothing more than a wheel type inventory system you bring up with a button press, but it works just fine. 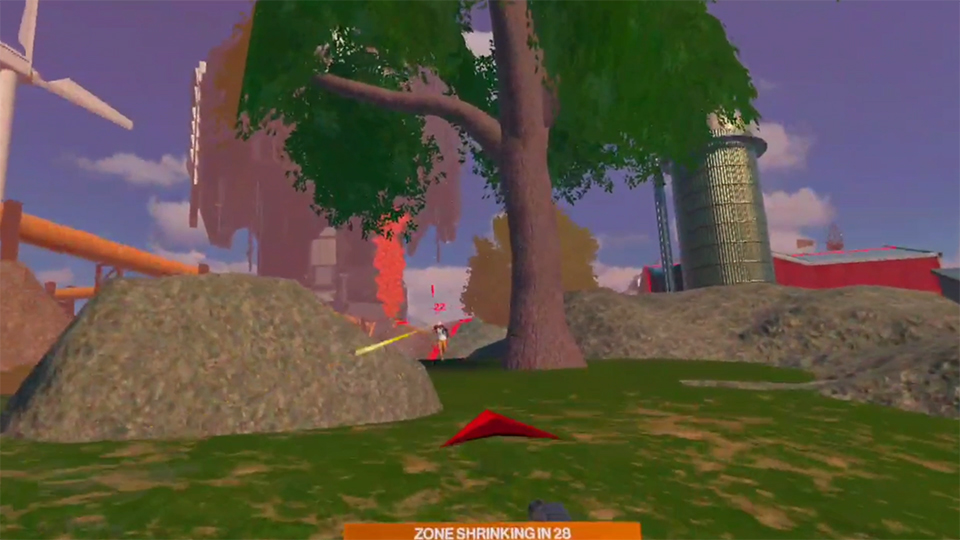 Fire fights are as hectic as ever!

Whether you play this on PC or a Quest 2 headset, the visuals are near identical and come off as fairly simple when compared to other games which makes sense as this is currently cross-platform between PC & Quest headsets.  The quality in the visuals isn’t going to blow anyone away with fairly flat and uninspired textures though the map is very large and does contains some impressive buildings.  Where the visuals are lacking in quality, they are more then made up for quantity and polish with just about every second in the game running smoothly no matter which headset you play this on.  The 1 map you play on is broken up into zones like farmland or factory type settings with everything looks okay, if not stark. That simplicity in the visuals allows for an endless draw distance which lets you see very, very far.  This is made readily apparent when you permanently die and can spectate the game, which gives you a birds eye view of the live map where you can watch all the remaining players duke it out.  Player avatars can look a bit stiff at times but animate well enough and initially come in a very small variety though as you accrue experience and level up more models become available and there a cometic in-game purchases as well for those looking to invest more coin.  It’s clear shortcuts were taken to get this to run on the Quest as well as it does, as is apparent by the original trailers from 2 years ago, and while the current state is not the best looking game ever, the sacrifices made kept the gameplay intact and allow for some fantastic and fun gameplay.

There’s not too much in the way of audio to talk about.  The menu has some fast-paced music to get the blood pumping but once the game starts, it’s all about communication with your 2 other squad mates and listening for the sounds of a nearby broken window or gunfire.  Guns sound decent enough though you really need a set of headphones to experience that on the Quest as the built-in speakers just don’t do the audio justice.  Once again though, everything in here matches the gameplay simply fine and that’s all you can ask for in any game. 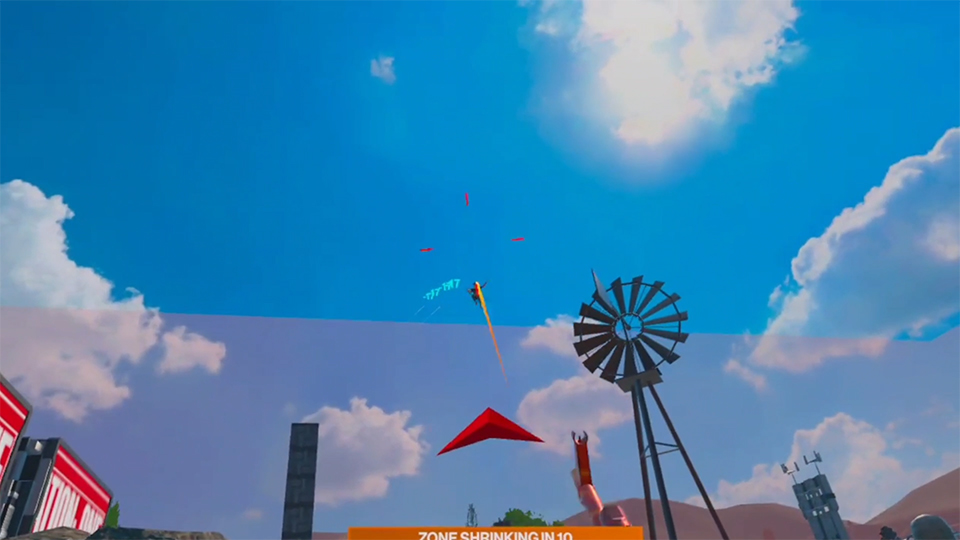 Lacking visuals aside, POPULATION ONE really nails the gameplay with regards to traditional Battle Royale action.  The only mode currently available is the the 6 teams of 3 facing off against each other and I would love to see an additional free-for-all mode with no teams at all, though I understand the reasons why as dividing the player base between multiple modes could extend lobby times, which no one wants though with plans to release this on steam and PSVR, I’m optimistic that the game will see a growing player base.  If you don’t squad up with friends you’ll be placed randomly with strangers which is awesome though you will occasionally be paired with a silent player or child which may hurt your efforts, especially if your facing off against a cohesive unit. When you die, if 1 of your teammates is still alive, you’ll become a sort of ghost that can still move around, and if your ally gets to you, they can pull out some defibrillator paddles and rub them together to bring you back to the action which can extend your game session and make for some harrowing moments, but that mechanic can feel a little cheap at times and  I would love to see a more hardcore mode that removes that feature.   The ability to climb any surface may seem a little silly when your scaling brick buildings, but it allows for a sense of freedom that very few shooters have and the verticality in POPULATION is one of its greatest assets. 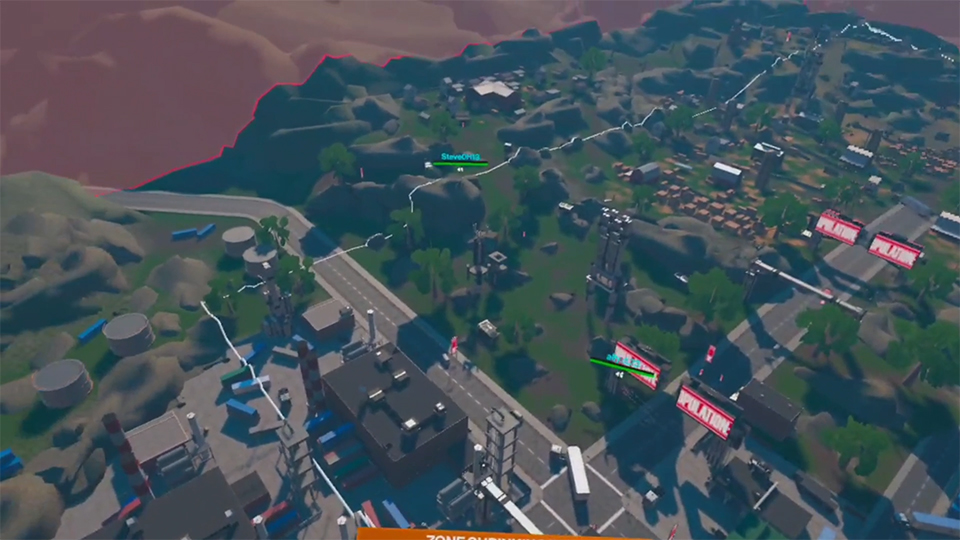 The draw distance is awesome!

I am loving my time with the game and while I would definitively tweak some things, I admit that is more personal preference than any faults on the games part.  For those who have played Fortnite or PUBG, what here will feel instantly familiar and for those who have dabbled in VR Battle Royale games, this is probably the most refined VR title currently available in that genre.  Matches won’t take more than 10 or 15 minutes at a time and I have never had to wait more than a minute or 2 to find my next matchup making very easy to play ‘just one more time’ again and again and again!

What would I pay? This is $30 US and while I am hoping for some visual upgrades as time moves on, as it stands today I’m addicted to this game and can’t get enough of it and am more than happy with the asking price!