Have you ever wondered what it would be like to be a giant Squid?!  While wonder no more as Tentacular puts you in the role of a giant invertebrate, raised by humans and only at the game’s onset is the truth revealed that you are not a homo sapien, but a multi-limbed Architeuthis.  What ensues is a whacky physics-based puzzler where you try and aid the local island-folk in their daily lives and much more through over 50 puzzles. 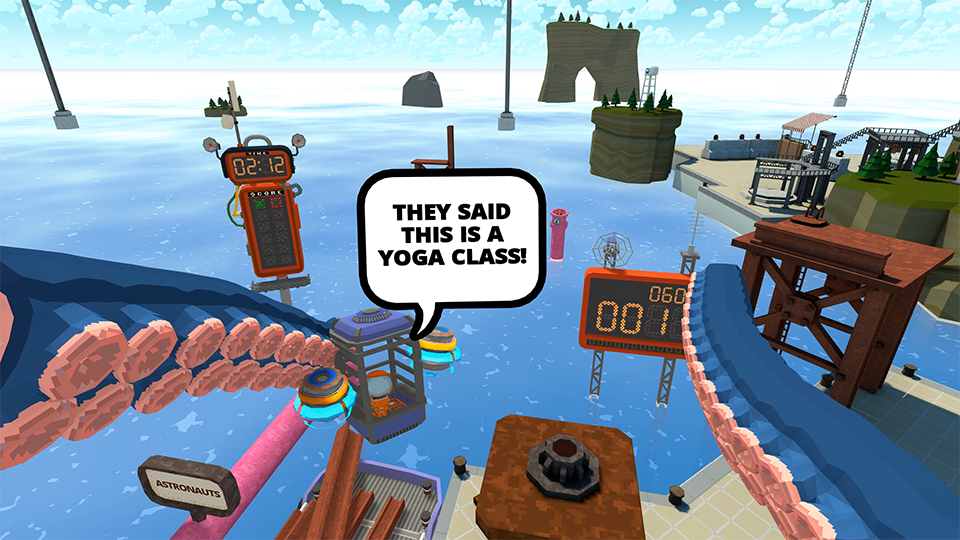 The townsfolk are fairly sassy!

While you technically have more than 2-limbs, only 2 are at your disposal with each controller controlling 1 very large tentacle.  Things can get awkward (in a good way) as the only way to grab stuff is to use your suction cups with the cups on the end of your limbs able to lift smaller objects, while bigger ones will be needed using the suckers closer to your invisible body.  After that, it’s all about messing with each scenario you are placed in with every stage putting you on the coast near a section of the island with buoys on the water limiting where exactly you can roam.  Each successive mission will be tied a person on the island so you may just be cleaning up debris or looking for items early on, but soon enough you’ll be using the environment to create makeshift slingshots, throw rockets, decorate a Christmas tree and utilize alien technology.  That technology comes in the form of magnets which will be needed to build the insane structures that the townspeople apparently need.  Each stage is scored with that score being based upon how fast you complete a puzzle or by the specific items needing to be built or dealt with in said puzzle, though as far as I can tell, that’s just for bragging rights only. If you screw up or fail, which is possible on some puzzles, a box behind you contains a reset button that lets you start from the beginning, offers a hint or lets you leave back to the town.  Once you complete a task, you may be asked to snap a Polaroid of your efforts with the game having an overarching, albeit loose plot, that carries you to its absurd conclusion.  As you swim through the minimum 5+ hour campaign, you’ll unlock new items which can be created in the sandbox mode that lets you just mess around which fine, but admittedly, not my jam, so I haven’t’ spent much time in there. 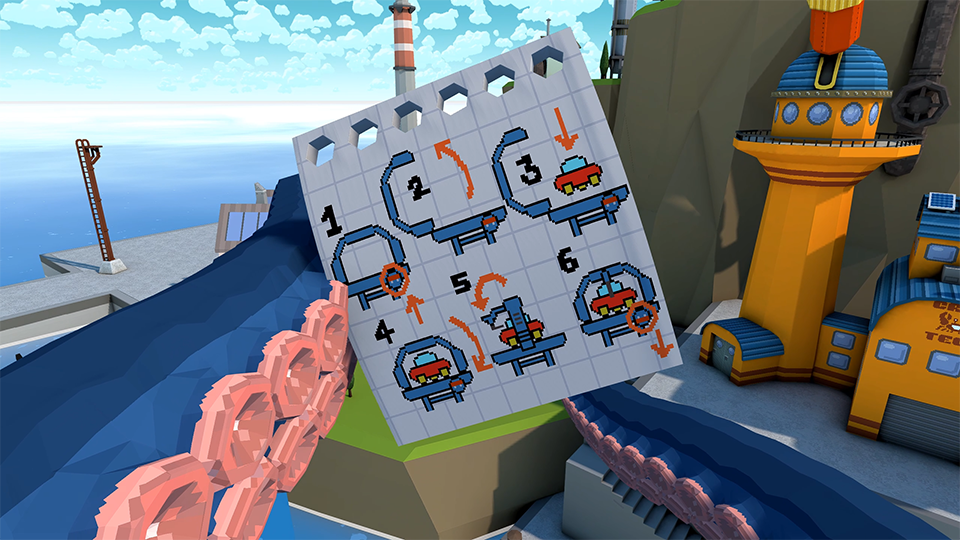 Instructions are simple, but getting them done is whole different story.

Tentacular is a game pumped full of charm and polish and it shows on just about everything you can put your eyes on.  It’s all cartoonish and looks very much like a diorama because you are monstrous in size and everything around you is tiny.  The populace looks like little mega blocks type people and move with 1-frame animated gestures that just looks so damn endearing and video-gamey.  Everything on the island looks like a child’s toy with buildings, objects, and the island itself looking like something you could buy from the kids’ section in Wal-Mart.  The ocean rises and falls around the islands with dynamic lighting adding some nice shadow effects that just make everything in here just pop.  Its bright, colorful and oh so friendly with some island puzzles being quite small, while others have a fair bit of distance & depth.  Electricity, explosions, fire and so on also pop-up throughout the story and as this is very much physics driven, you’ll be running into piles of debris and destruction with some more outlandish scenarios popping up that I won’t ruin here.  I honestly can’t really complain about the presentation as it nails that sense of comedic charm that the game is going for. 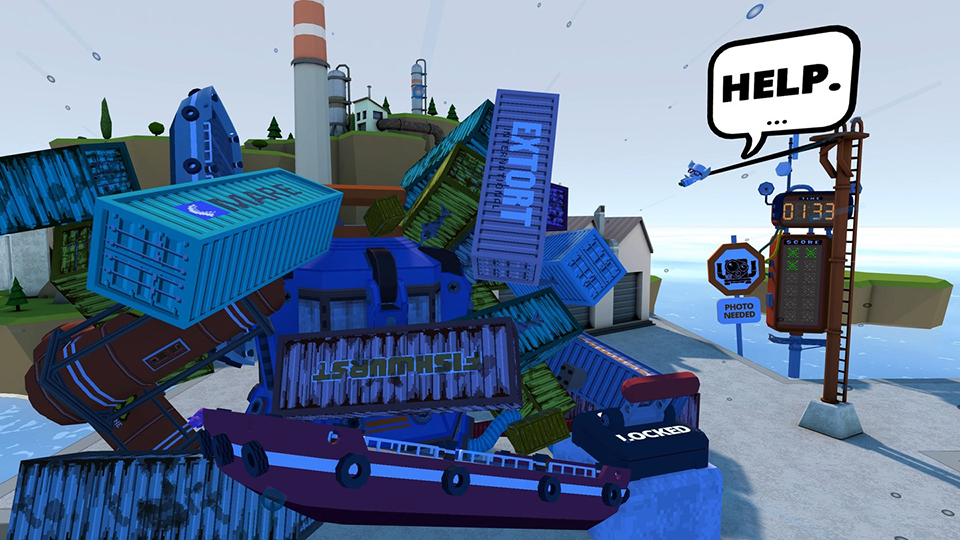 Magnets can be troublesome.

Going along with that presentation is some equally charming audio.  The populace all speak a sort of gibbersish with text bubble popping up allowing you to understand what they are saying.  It can be a little annoying when they ramble on for a bit, but for the most part, it never really bothered me and there are options to speed up the speech and mute it so you can deal with it as you like.  The music is also on point, falling into the background and never offending, often matching the seas side themes of the island or whatever situation you find yourself in be it the laid back or hectic and always fits the action perfectly.  As the physics are the star of the show, the audio better be on point with all that object collision and, once again, it’s damn near perfect with every bang, scrape, and smash sounding exactly as they should! 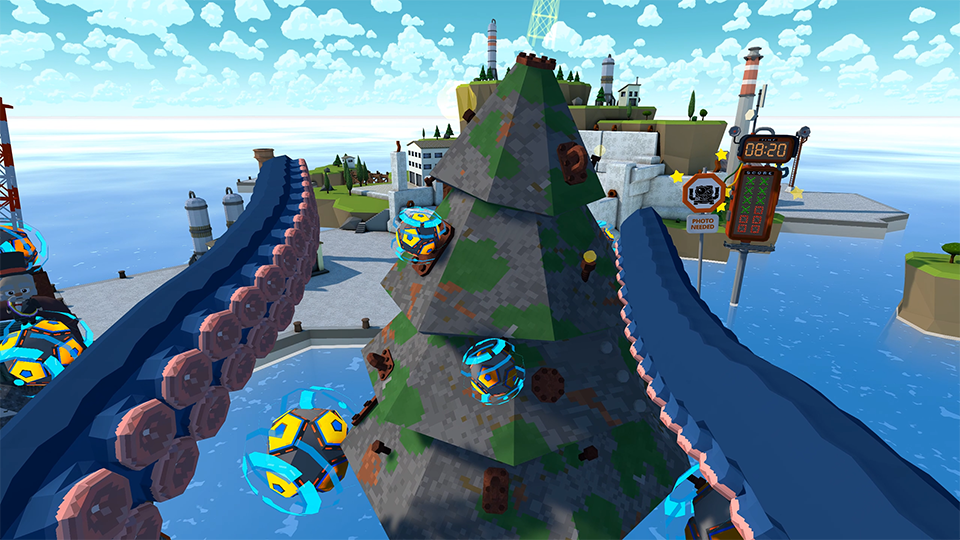 Nothing makes a Christmas Tree like metal and magnets!

As this is a physics-based puzzler, it’s those physics that provide all the fun and they can be hilarious and they can also be frustrating, but that is by design.  With your 2 tentacles, placing objects is never as easy as you want it to be, and I fumbled trying to make my towers of junk tall enough so I could reach a goal.  Once the magnets come into play, things get crazy and the gameplay is not unlike games like Surgeon Simulator or even Gadgeteer in regard to the trial-and-error mechanics at play.   It can be frustrating for sure, but with a little patience and thought, every puzzle is do-able with some being fairly easy, taking only a minute or 2 and some taking much, much longer than that.  I will say though that I did struggle with the puzzles that required me to throw objects, a problem many VR titles have.  Most of the action takes place in front of you, but some of the larger puzzles may require the player to move around and when that happens, it’s better to do it using natural body movement as click-turning is your only comfort option, which is disappointing in 2022, and using that option could cause your tentacles to collide with something nearby, possibly wrecking progress.  Beyond those issues is a small, friendly puzzler that will appeal to newbies and veterans alike thanks to its easy to pick-up and play controls and light-hearted, comedic designs. 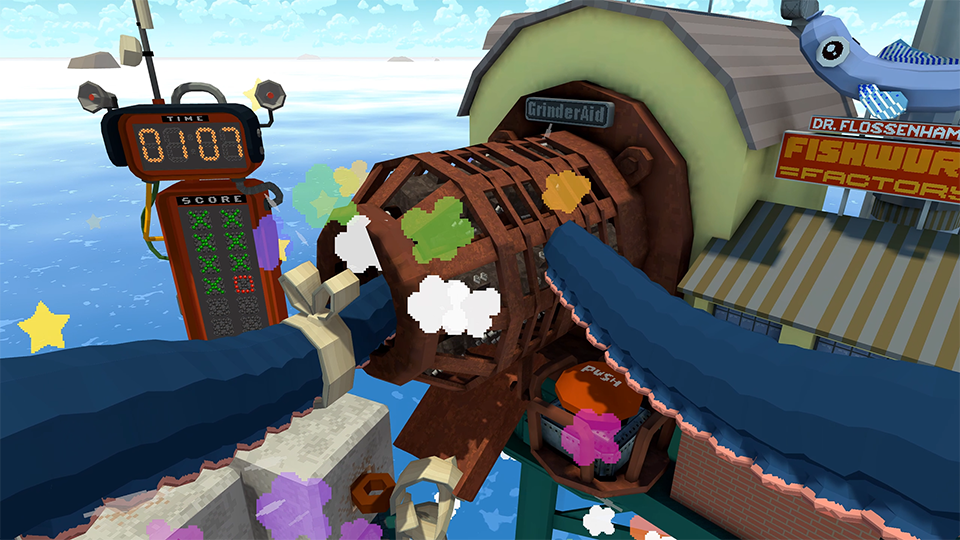 You’ll be messing with a lot of different machines.

Tentacular is a fun time in the headset and while the more casual and light-hearted nature of the game may turn some away, I guarantee that anyone who picks this up and plays it won’t have a bad time.  Some of the puzzles can cause frustration, but I never encountered a puzzle I couldn’t beat (with a little patience) and that same casual nature makes it great for VR users of any age.

What would I pay?  This is $25 US and worth it considering the amount and quality of the content here.  It won’t be for everyone, but for those looking for some light-hearted comedy and some challenging physics-based puzzles, Tentacular is a fun time playing as a giant, awkward 2 tentacled squid.

Devolver Digital Provided The VR Grid with a press code for this title and, regardless of this review, we thank them or that!