As far as gaming goes, if VR was made for one reason and one reason alone, it’s combat…don’t agree?  Fight me!  The idea of brandishing a weapon and going toe to toe against humans, monsters, robots or whatever is just made so much better by “being there”.  We have had many games and experiences that try and emulate real life action, though for every great title we get 10 more forgettable ones.  Until You Fall looks to take a more casual look at the sword fighting genre by placing you in a dark fantasy world with Rogue-like action where you must combat twisted spirits and monsters with a variety of weapons and get as far as you can until you die. 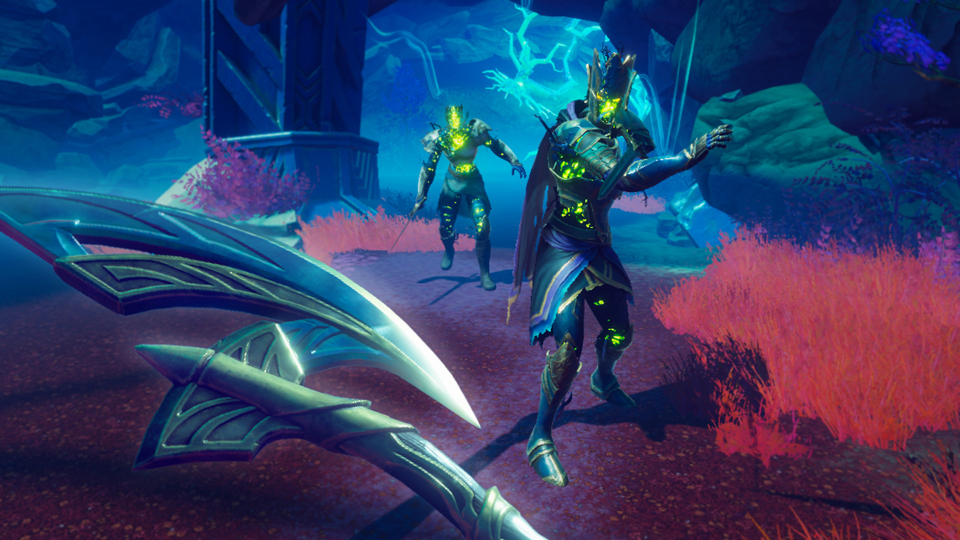 You’ll be handling 1 or 2 weapons on your quest so you’ll need a pair of motion controllers as you’ll be swinging at your foes from all angles.  The combat isn’t as free form as games like Gorn or Swordsman but opts for a more arcade style of swordplay, similar to the IOS game Infinity Blade.  You can swing with reckless abandon, but the enemy will block all your efforts and still counter, which will be indicated by slash marks on your screen.  When you see those slashes, you need to bring 1 of your weapons to the position to block it.  Once you break through their shields, you can swing away with larger swings causing more damage and indicators appear on your foes telling you which strikes will cause more damage as hitting those marks allows for combo attacks.  Dodging also comes into play against harder foes requiring you to move left, right or duck to evade those attacks.  Modifiers increase not only your health and weapon damage but affect blocking damage, which is damage done while defending blows, dash damage which allows you to get the 1st hit on an enemy and a few more options.  Every run through accrues your Aether which can be spent on permanent weapons and weapon upgrade which affect many of your stats.  During each successful level completion, you will also pick up buffs for that run that affect your weapons powers and abilities making you a little more powerful the further you get.  Once you die though, and you will die, you’ll lose those buffs and are sent back a hub area where you can spend your Aether on those permanent upgrades. 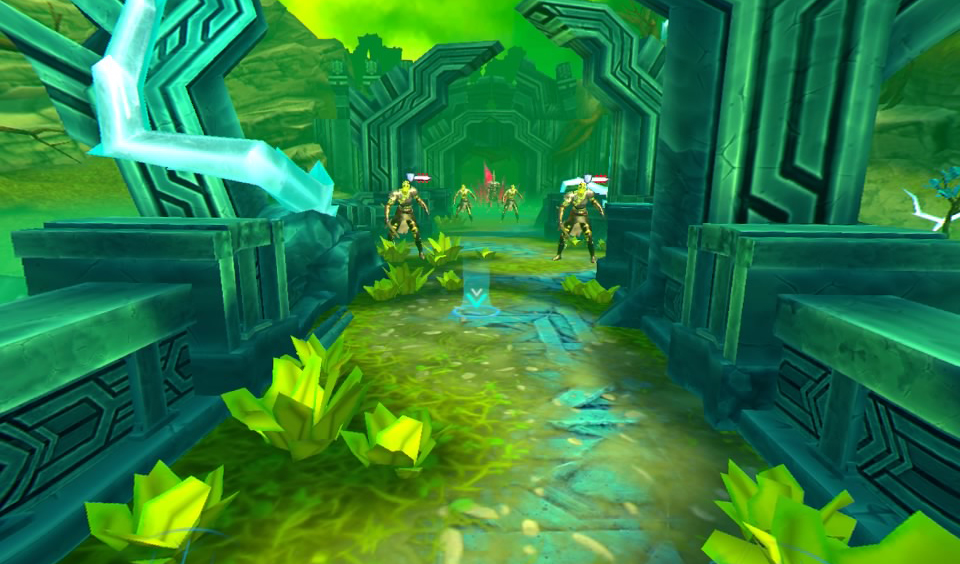 PSVR visuals take a bit of a dive, but it still looks good.

Until you Fall describes itself as taking place in a Dark Fantasy world, and while that is true, the color palette used makes for bright and striking presentation thanks to the neon and pastel art style that encompasses both the environments and enemies.  No matter which headset you play this on, the game looks really good, minus 1 or 2 very trivial issues, but on the PC side, things just pop a lot more due to some better textures, resolution, overall flare on the enemies and your weapons thanks some more dramatic effects.  That’s all just superficial as on PC or PS the game plays identically with no issues whatsoever but if you have the choice, PC just has more flare.  You have a body in VR which animates quite nicely as do all the enemies you face.  You won’t face a huge variety of enemy abominations, but there is enough in here to keep you on your toes and every time you meet a new enemy type, you know you are in for a world of hurt as you’ve reached the next level of difficulty in the game.  Enemies will stand and wait for you at a distance until you get close enough and can surround you if you’re not careful so it’s best to try and tackle the enemies one at a time.  As this is a rogue-like you’ll visit the same stages again & again, but in a random order so every playthrough is never quite the same.

Audio wise this has an absolutely kick-ass synthwave soundtrack that pumped me up every time I heard it and helped bolster me forward for just one more attempt way too many times.  Enemies are soulless warriors who do little else besides grunt and groan as they try and hack you to bits, but that works too.  Pushing you ever forward is the Runesmith, a woman with a connection to the fallen land of Rokar that you are trying to restore after a calamity of unknown origins.  Every success has her stroking your ego and hammering home how kick-ass you are.  Even when you die, she urges you to try again and her constant prodding to push you to your limits works when it comes to keeping the motivation to continue high. 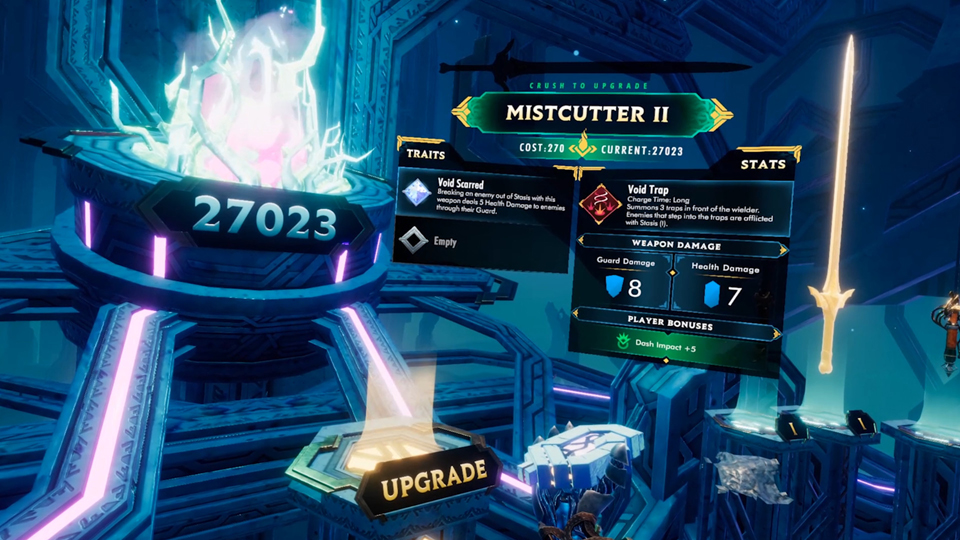 Until You Fall turns Rogue-like action into a science making it equal parts ridiculous fun and maddening frustration.  By design, you will die as enemies are just too tough until you level up and while each run does differ slightly, repetition is still the name of the game here.  On the PS side of things, it took me 2 hours to beat the 1st boss, which is stage 6 while on the PC side, it took me half that time with a weaker character and I can’t figure out what the differences are between the versions gameplay-wise though I think it could come down to the light tracking of the PSVR not quite aligning my arms to the blocking queues causing some unnecessary damage, but in truth, I’m not 100% that is the case with my 2nd guess being that due to my color blindness, those visual prompts just pop more on the PC side of things allowing me to react a bit faster as I can see them a little more clearly.  REgardless no matter what I played on, enemies I struggled with became easier and easier, to a point where I didn’t really sweat any of them too much, having memorized their attack patterns and behaviors while taking them out faster each time thanks to the increase in my power.  For those looking for a full-on sword wielding sim, you also might want to look elsewhere as this is very much reliant on those attack and defense prompts to excel.  There are 3 levels of difficulty and you can change that setting in between attempts, but even on the easiest mode, expect a fair bit of challenge.  One other quibble would be the lack of a smooth turn option which is ridiculous, especially when some enemies will surround you and you are forced to click-turn then micro adjust your position in the real world to square up with them properly.   Still, besides the turning issue, this delivers a near flawless experience as far as rogue likes go.  Repetition is the name of the game and if you can get past that fact, then you’ll have an absolute blast.  For those that maybe don’t want to fight the same dudes a hundred times, this may wear thin before you get to the later stages. 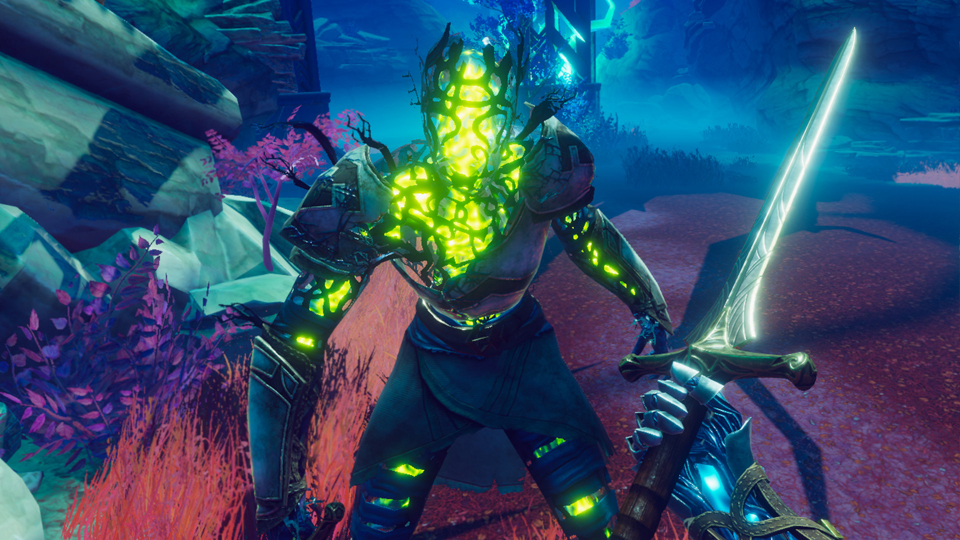 Until You Fall delivers a fun and addicting VR slasher that is so easy to pick up and play, but difficult to master.  With a roughly 10-hour campaign (unless you have super human reflexes) there is plenty to get too and while I was frustrated with the game on more than a few occasions, that carrot of always getting a little powerful kept me moving forward and trying again. If you’re looking for a story, this lacks that but if you are in the market for a fast paced arcade brawler, this will put you through your paces and is also a great title to show off to friends and family.

What would I pay?  This is $25 and worth it as long as you can handle the grind. Despite the Simon Says nature of the combat, it’s still incredibly intense and rewarding, whether you beat your foes or not.  It’s also addicting as all hell and way to easy to try “just one more run”.

Schell Games provided codes for this title and, regardless of this review, we thank them for that!