What would you do if you woke up in the passenger’s seat of stranger’s car with no memory of who you are or how you got there?  What if the man driving the car had told you he had picked you up hitchhiking and seemed to know more about you than he should?  That’s how Hitchhiker starts off and it doesn’t take too long before the craziness begins, and you are left to ponder just what is real and what isn’t in this odd, narrative heavy title. 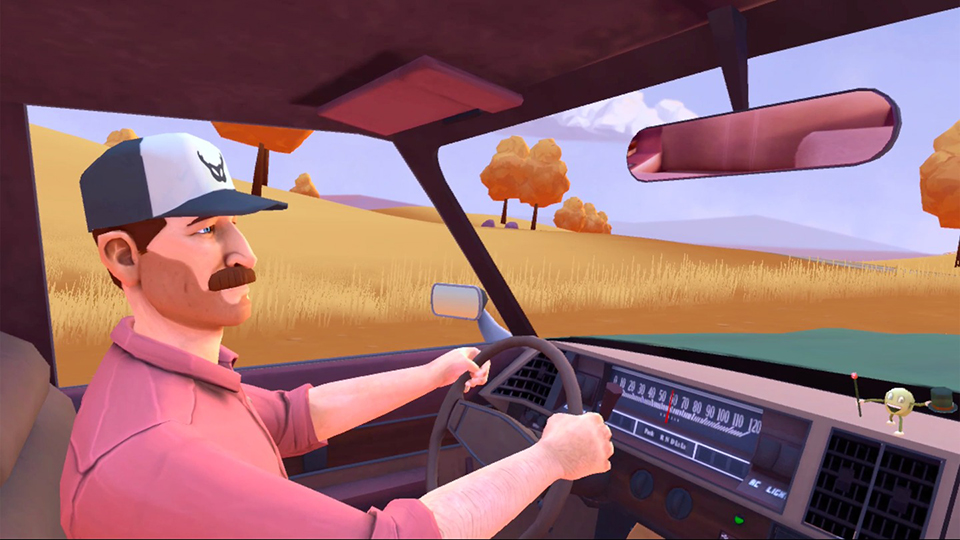 Imagine walking to this and not knowing who or where you are?!

Throughout this tale, you’ll be sitting almost all of the time as you’ll be the passenger in a few different vehicles throughout the 3(ish) hour story, meaning almost all of your interactions will be with the items nearby.  You can’t physically grab at anything but must point at it to highlight it, then press the X or A button to interact with it, triggering an inspection screen that pauses the game to let you look at the item floating before you or activating it for it’s context sensitive purpose.  You can also click-turn in the vehicle, an option I wasn’t aware of until the final chapter in the game, allowing for a little more comfort than constantly craning your head to look at the driver, which is what I did.  The companions you find on your journey offer stories about their own pasts while slowly unlocking your own by asking your thoughts on whatever they are talking about.  When it’s your turn to talk, conversation options will appear ahead of you, sometimes with multiple choices or just a single one, that progress the story ever forwards.  Occasionally the game will throw a puzzle your way that may require you to highlight and interact with something nearby, like spinning the knobs on a radio or messing with the car windows, but for the most part, this is a relatively passive experience that asks you to pay attention to your surroundings along with the philosophy’s and information your company spews out, as they will help unravel the mysteries surrounding the strange roads you travel upon. 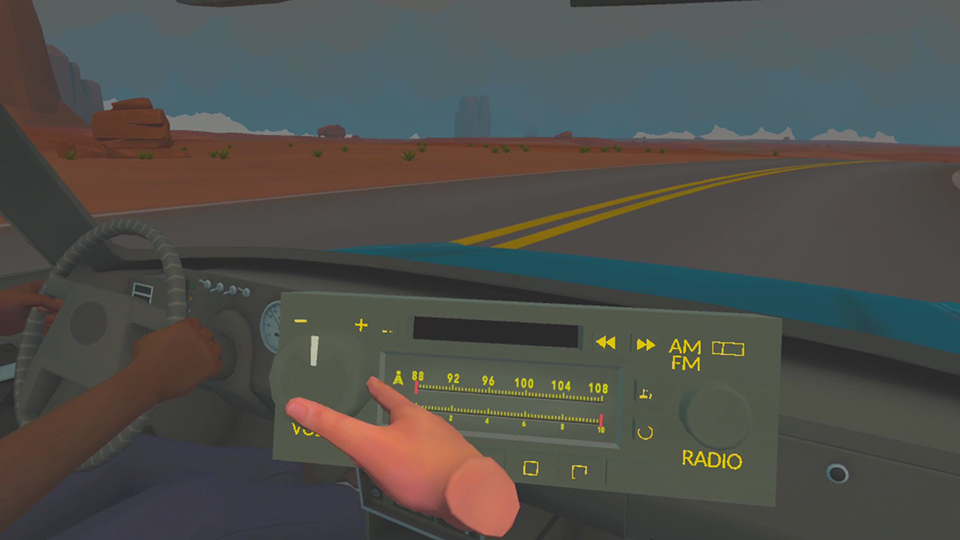 You’ll have to solve a few clever & bizarre puzzles.

Hitchhiker is not a good-looking game, there’s just no way around that.  It’s not the worst game I have set my eyes upon, but outside of a few items you’ll pick up on the road, it can look bland, boring and very repetitive.  There are 5 different drivers and with them come 5 unique locales from dirt roads surrounded by grassy fields, a quiet neighborhood, desert highway and a couple more.  The overall look of the game is cartoonish but almost everything, including the people you meet, lack much in the way of details and animations making everything in here look under cooked.  Car wheels don’t spin while driving, mouths barely move and often don’t match their speech and the landscapes lack anything other than simple environmental objects like grass, trees and rocks that don’t just repeat, but pop-in, hampering immersion. As I looked around, I also caught a lot of artifacting in textures that caused some items, like the radio or speedometers, to look partially rendered and janky.  As you are (almost) always the passenger, the only thing to look at is the interior of the car, the outside world and the driver to your left and minus 1 or 2 key moments, the drives are never that exciting making for a rather dull ride.  With each stage taking a half hour or more to get through, after each stage, I had to take a break and compose myself before diving back in for another lengthy conversation.  It’s not just driving in a car and throughout each ride, events may happen that have you in different places or you may be treated to a story from the past, told via lightly animated still images in different styles that I did appreciate.  One last issue is the subtitles & text that pop up right in front of you and follow your gaze, always being in your face with no option to toggle save for a font size option, so even if you want to take in the sights or just look at your chauffer, you’ll have to contend with the intrusive text.  It’s not awful, but the combination of slower paced gameplay and uninspired visuals makes this a title for those with patience and who don’t need to be fully immersed in the experience. 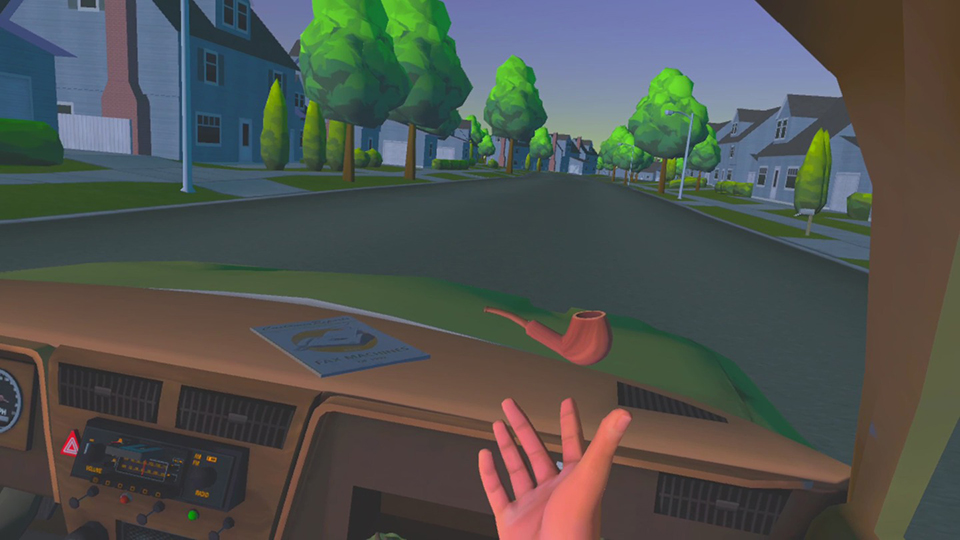 Key items needed to solve your mystery will pop up often.

Sound design is up next with the star of the show being the voice actors who talk and talk and talk.  That’s not a bad thing as what they have to say is where the crux of the story lies and for the most part, they do a good job. Unfortunately, quite often the last second of what they are saying gets cut off, making for dialogue that can sound quite weird at times as the next sentence interrupts the last and this happens throughout the entire game. You don’t speak, but when you have the opportunity to answer a question or make a choice, you can choose from text that pops up ahead of you.  Depending on the situation, there could be some music playing but for the most part, save for some dramatic moments, the only sounds you’ll hear will be that of the car and driver but when stuff gets weird, the music playing matches the outlandish happenings around you.

Hitchhiker really gave me “Twin Peaks” vibes as it’s a very slow build with lots of weird twists and turns.  What is initially an extremely confusing story soon begins to coalesce into a narrative that I did find myself invested in.  It can be slow, plodding and even exhausting at times, but I did want to know how the story was going to end, and that kept me going to the games somewhat lackluster conclusion.  I get what the developers were going for, and other than the lacking visuals, I think they accomplished their goals, I just don’t know If VR is the best choice for this style, and length of game.  It’s just hard to sit there, staring at next to nothing while someone next to you prattles on and on.  I’m not saying it’s not worth the journey, I just think this is for a small group of people that really appreciate narrative heavy stories AND don’t mind just sitting there not doing much in a headset. 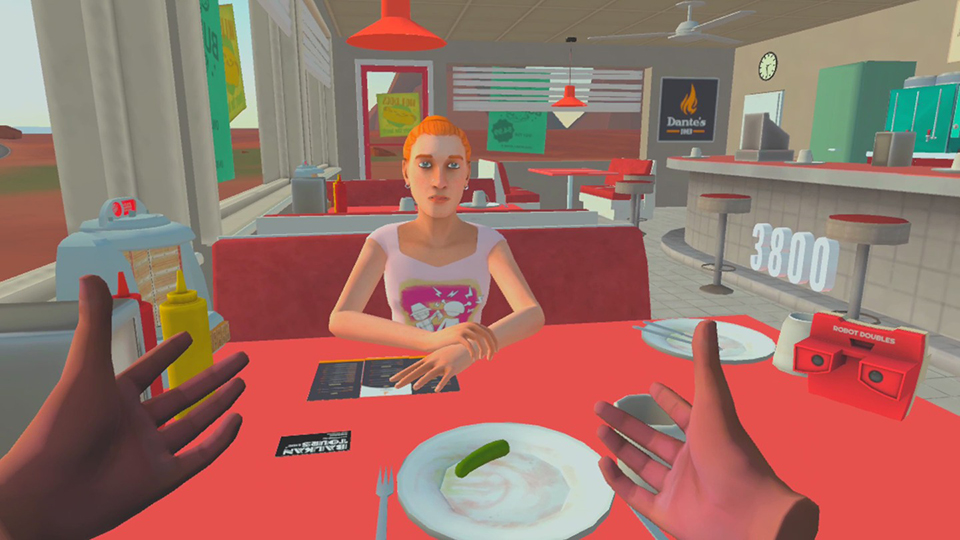 I appreciate these kinds of experiments in VR, but I feel like Hitchhiker is as much of a swing as it is a miss.  The story in an intriguing one, but it doesn’t really pick up until the 3rd act and that slow build in combination with all my other issues has me really only recommending this to those who basically like interactive novels and don’t mind enjoying them in a headset for a few hours.

What would I pay? Given my many issues and the niche nature of the game, I can’t recommend this for the $22 US asking price as it can be a struggle to get through.  On top of that are the issues I brought up and, at the time of this review, I wouldn’t spend more than $10 on this.

Versus Evil provided The VR Grid with a press code for this title and, regardless of this review, we thank them for that!