It’s not often we get sequels in VR given that the medium is only a few years ago so it’s surprising when we do.  Honor and Duty: Arcade Edition came out in 2016 out of VR and was ported to VR and broke boundaries in regards to multiplayer gaming in the PSVR.  The 5 v 5 online match-ups were a 1st and while the games indie (and budget) roots showed, the small asking price and support for the Aim controller allowed us to forgive its many shortcomings.  Soon after that games VR launch, Strange games said they were working hard on a sequel built for VR that promised to be bigger and better in every way, and now we have it. 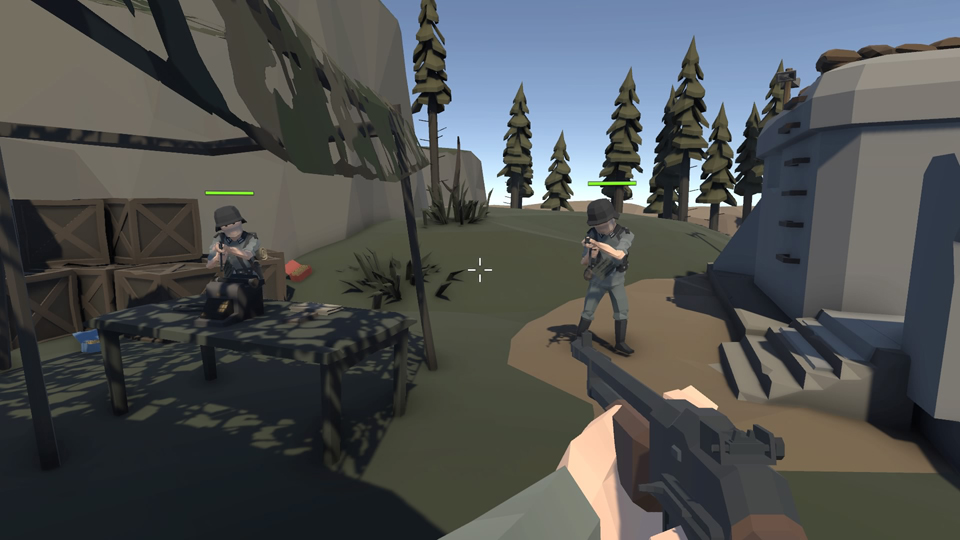 Not a good position to be in.

Aim, Move and DS4 are not only all supported, but for the 1st time can actually be used in conjunction.  You can use any of the controllers individually and they control as you would think they would, but there is some added fun in having a move controller to use as an active side arm.  It’s not a perfect system as it’s a little awkward to keep a Move at your side while wielding the other controllers making this control combo more of a novelty, but seeing as how it’s completely optional, I like this new effort in immersion. The guns all feel really good and much improved over the original game and each feels very unique with them being much more effective at different ranges.  One special note is the ridiculously awesome sniper rifles which have an awesome lense that is always active, but when you bring the rifle really close to your face, your view expands making your entire view that of the lens, allowing for some more efficient sniping.   You can customize a bunch of comfort settings to your liking adding or removing any aid should you experience any sickness which should allow for anyone to pick this up and play.

D-Day now offers a couple different modes with Team Deathmatch and Domination being found under the multiplayer option.  32 players are supported in any of the modes available which is mighty impressive considering the closest we had before this was 1/3 that size.  To play the Team based modes, just pick multiplayer, choose a ‘server’ and go.  There are next to no loading times and you are dropped immediately into the action no matter how much time is left in a match.   You typically spawn near your allies or at specific point in the map and in domination mode you will spawn at one of the points your team controls.  Team mic support is available so you can chat it up with your team allowing for some coordination.  Vehicles are available to drive around the maps and can carry multiple soldiers with tanks being able to unleash some devastating destruction. 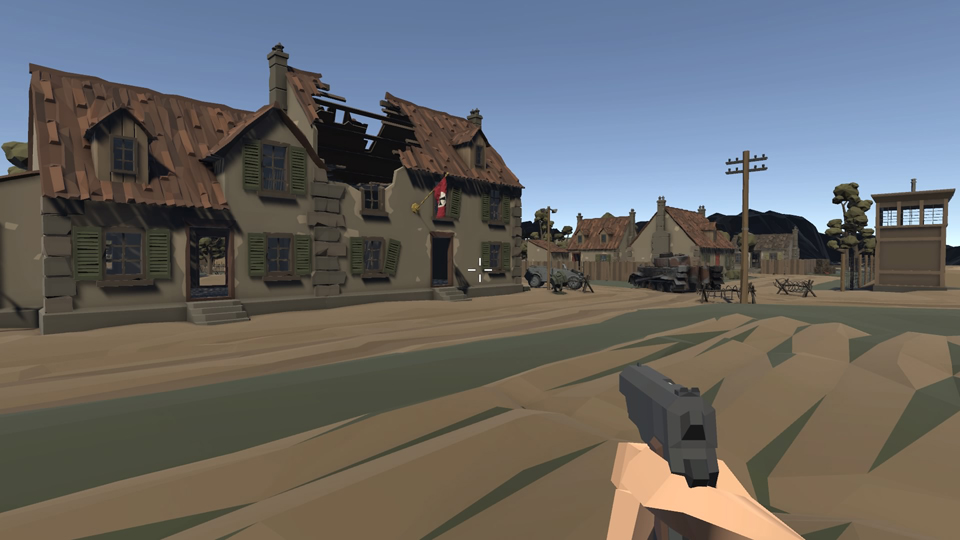 The level design here is great.

The Battle Royale Mode is a little less friendly as choosing this mode automatically places you in a sandbox lobby where a timer counts down until the game starts, regardless of how many players join.  Customization options are desperately needed on Battle Royale Mode as it’s near impossible to get a decent sized game going.  People either join and quit when they see the small player count or have to wait to join while a match plays out plus there is no mic support, so you are left to mess around in silence.  Starting a match has you parachuting in on a singular map.  Once you land you need to find a weapons and take out anyone you see as you are slowly herded towards the center.

The look of D-Day has also opted for a lower poly/low texture look that lacks a lot of detail, but still looks pretty good.  The 4 Multiplayer maps look good and each carries a different flare with a large wall in a destroyed town being my favorite.  There is a war-torn beach area, a small ruined town loaded with houses and the last is a battlefield complete with bunkers and trenches.  The maps are all very large and even though the texture details are low, the level of detail that went in the stage design is impressive.  Backgrounds are active with planes flying overhead which adds to the feeling like you are fighting on one many fronts and the larger battle is happening just over the horizon. 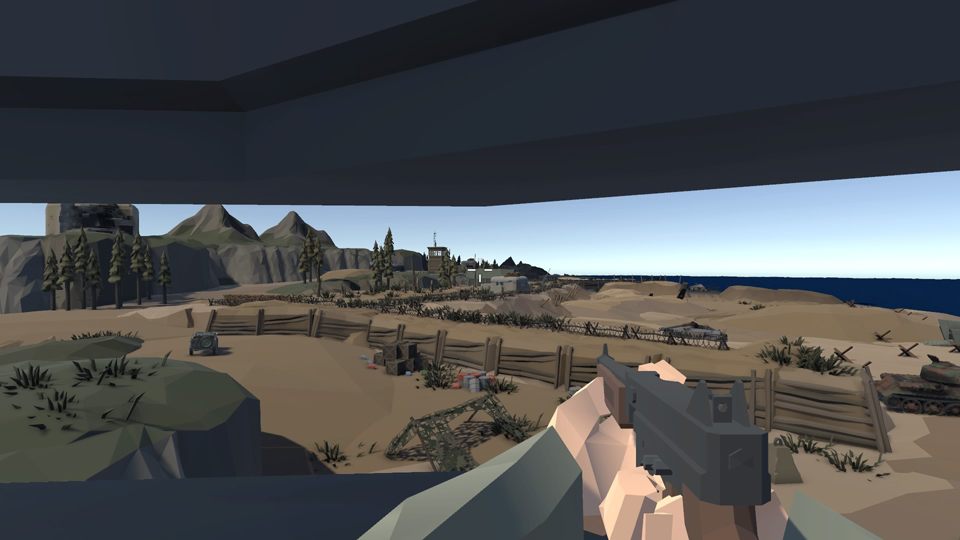 The draw distance is good!

Audio is on point with guns and other effects sounding as they should.  There are some environmental noises which can be thankfully turned off in the options mode as while they do add to the ‘realism’ of the game, you can’t hear where people may be fighting which can you have running around the map not having any idea where the action is taking place.   Strange games has hired one of the more popular PSVR YouTubers to provide the voice overs and throughout the game he’ll just tell you when flags are being captured and other notifications you should be aware of.

The stages feel like they were made for larger scale battles and when you are in a full lobby, the action gets intense.  With that said though there are still some rough edges that need to be smoothed out.  Enemies may not be facing you when they kill you or people will be constantly looking down as if they have a crippling back problem.  I ran into some spawn camping issues where I was spawning exactly where I was just killed, along with the rest of my team, which was insanely frustrating.  This may be somewhat weapon dependant, but I had some issues with the accuracy and bullet tracing as I would have a guy lined up in my sights and either not hit him or have my bullets spray all over the place.  I never played with more then 4 people in Battle Royale mode and if you play alone, the game spawns bots who act more like armed zombies then anything amounting to real competition making it laughably easy to dispatch them.  There are other smaller issues as well but at the end of the day, these issues are infrequent or minor and don’t really hamper the overall experience, which I am having a blast with. 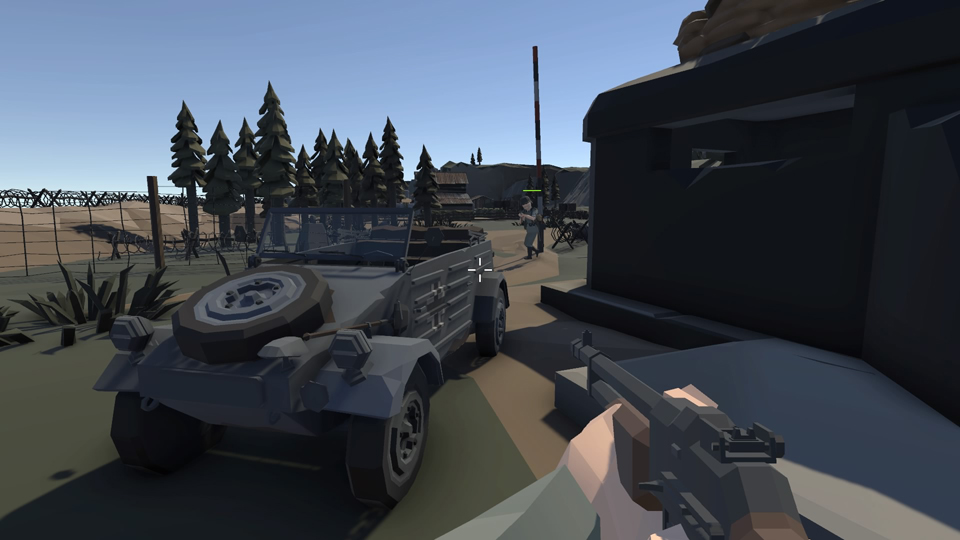 When it’s all said and done, if you have a PSVR headset are into multiplayer gaming, this is a must buy title. I’m not saying it’s going to blow you away or come even close to the AAA non-VR multiplayer titles, but what it brings to the table is still a lot of fun.  The developer has shown a passion for making the best game he can and has made a game for FPS fans that we have been clamouring for.  It’s by no means perfect, but it’s a giant step in the right direction for the future of multiplayer VR shooters!

What would I pay? D-Day is an absolute steal at $10.  Strange Games Studios has raised the bar with what we should be expecting out of our multiplayer experiences and supporting innovative developers like this will hopefully allow them to improve and deliver a more polished experience in the future.

Strange Games provided The VR Grid with a press code for this title and, regardless of this review, we thank them for that!