Ivanovich Games continues to put new VR spins on classic gaming genres with 1976 paying homage to classic games like 1942 and its many off shoots.  In Back to Midway, you play as a pilot from a future that has discovered time travel and must go back to classic battles and turn the tide in the allies favour however, every time you change the course history, the future responds in kind, making for a true to form top-down bullet hell shooter with a comedic twist and whole lot more. 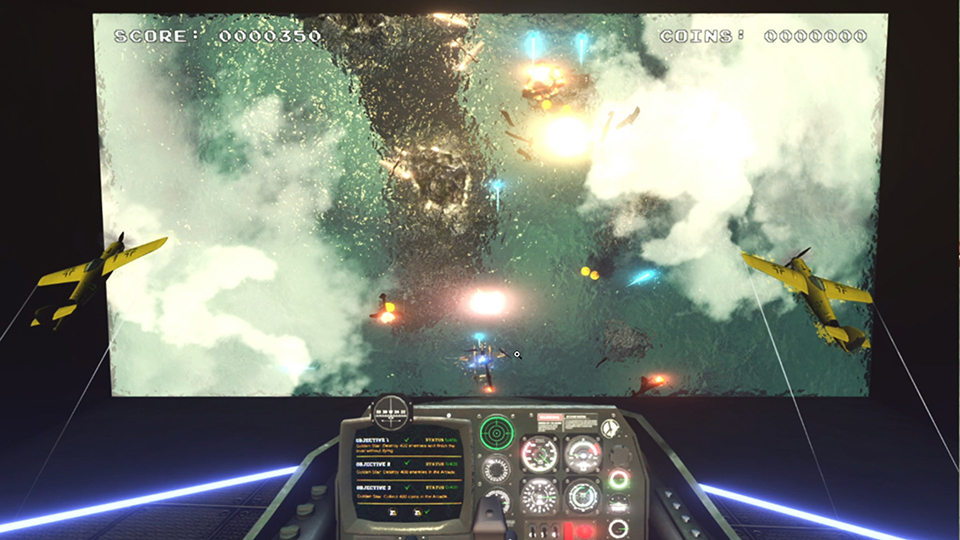 It’s a 2D top/down shooter like you’ve never seen before!

You can use the DS4 or a single Move, and if you’re on PC or Quest you can choose to go with tracked or button press controls, as you are in a simulation cockpit of-sorts while viewing a giant TV Screen.  If you use tracked controls, you grab the joystick in front of you and fly the plane as if you were in the actual cockpit emulating an arcade joystick.  While this method works, it’s cumbersome and awkward and makes the game unnecessarily challenging and I highly recommend sticking with thumbstick controls.  The stages slowly crawl forward in traditional fashion with stationary enemies appearing as you fly through a stage while more mobile foes may fly at you from any side, including above and below your plane.  Of course, power-ups will appear in the level as you destroy the enemy units, powering up your shots, adding reinforcements or aiding in your defences with some temporary shields.  Each stage has 1 or 2 ‘immersion zones’ which transfer you to 1st or much closer 3rd person action as you fly your plane from the comfort of your cockpit though you still only move forward so navigation is limited to moving up, down, left & right with some of the missions requiring you to land on a carrier at the end, which I wasn’t always successful at.  Each of the 16 stages has specific objectives to achieve in and out of immersion zone which reward you with more points and more coin and depending upon how well you do at these, you may need to revisit previous stages as every few stages are blocked by a minimum star count needed to move on.  The coin can be spent in the store where you can unlock and upgrade plane attributes including health regeneration, bombs, increased firepower and so on, allowing you to take and deliver more damage and making previous stages much easier.  Online leaderboards challenge you to do better and that’s just about the core of the gameplay loop with the campaign taking somewhere in the neighbourhood of 3 hours to get through. 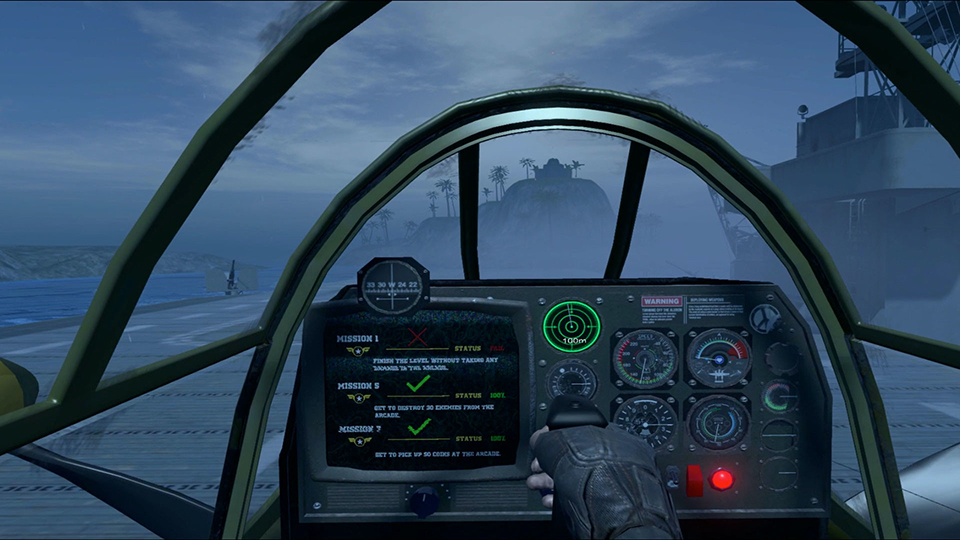 Immersion mode (sometimes) puts you right in the cockpit!

1976, at first, is a simple looking game with you in your cockpit, sitting in front a screen displaying some 16/32-bit era visuals with everything in the actual game looking great!  Your cockpit looks alright though lacks much in the way of finer details but seeing as how you’ll mostly looking at the screen that’s not the biggest issue.  Where things get fun is when the game goes beyond the game and embraces the glories of VR by having enemies drop in, appearing much closer to you and when you finish a stage your plane leaves the 2D screen and flies behind you which I always enjoyed.  Immersion mode puts you in the actual cockpit or just behind the plane and you now view everything in glorious 3D.  These sections never last more than a minute or 2 and don’t carry the most detail but mix up the gameplay nicely as it offers a completely different challenge from the core gameplay.   As enemies differ, new attacks show up and have you dodging various bullets in various patterns but soon enough you’ll be dodging homing missiles, lasers and even the environment itself.  While the game looks solid, when you start a stage, you are treated to a still image cut scene that uses images expanded way beyond what they should’ve been, providing some poorly rendered and recycled images of Dr. Ivanovich as he talks to about your exploits and for the reasons listed next, are the weakest part of the game. 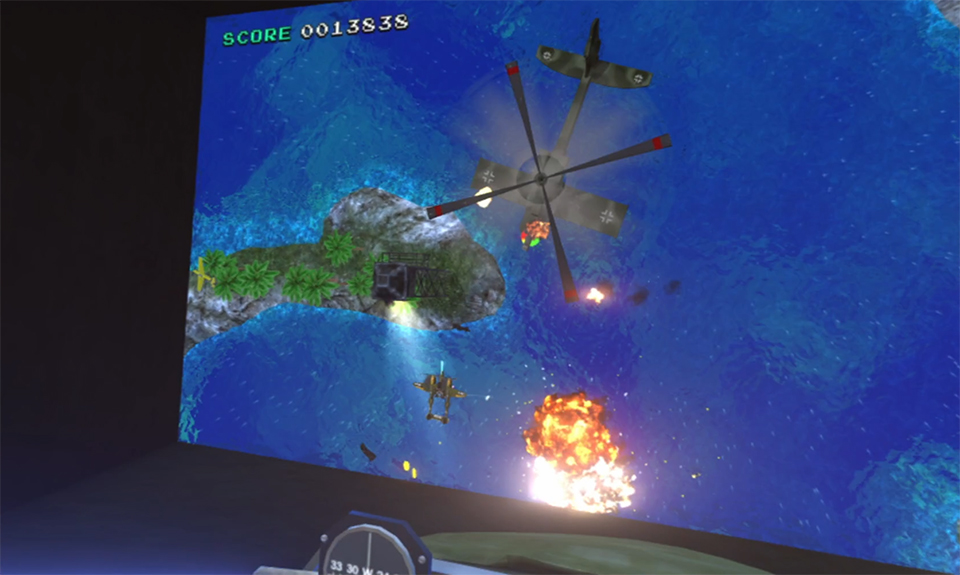 It’s like playing in a huge big screen with extra levels of 3D.

Sound effects are point with every shot and vehicle sounding as I expected with a lively military inspired arcade soundtrack here to accompany you during each stage.  Where the game falls flat is the plot as explained Dr. Ivanonich, a scientist dude, who’s comedy stylings I normally appreciate but come in such a high number that they became grating in mere moments and while there is a slight charm to that whacky narration, it’s just to frequent and too not funny.  Whenever I encountered a stages boss, the music would also cut in and out randomly causing for some erratic sounds and everything seemed to get louder or quieter for no reason.

I enjoyed Back to Midway for what it is which is to say that it is a great translation of that genre, but it still falls victim to its trappings, the worst one being repetition.  While you upgrade and see new enemy types, the first stage and the last stage feel nearly identical despite the increase in difficulty.  Upgrading my plane was satisfying as each increase in my planes abilities was noticeable, however slight, but as the game got increasingly more challenging, those abilities really just evened the playing field.  Visiting older stages after you have upgraded will more than likely increase your score but that’s assuming you have the drive to do so, which I don’t meaning any sort of replay factor is going to rely heavily upon how successful you were on your 1st attempts and whether you care about scoreboards.  Beyond that is a simple run of the mill top-down shooter that delivers upon the gameplay and while it utilized VR in some fun ways, it still ultimately feels like those games of old which depending upon who you are might be a good thing or might be a not-so good thing. 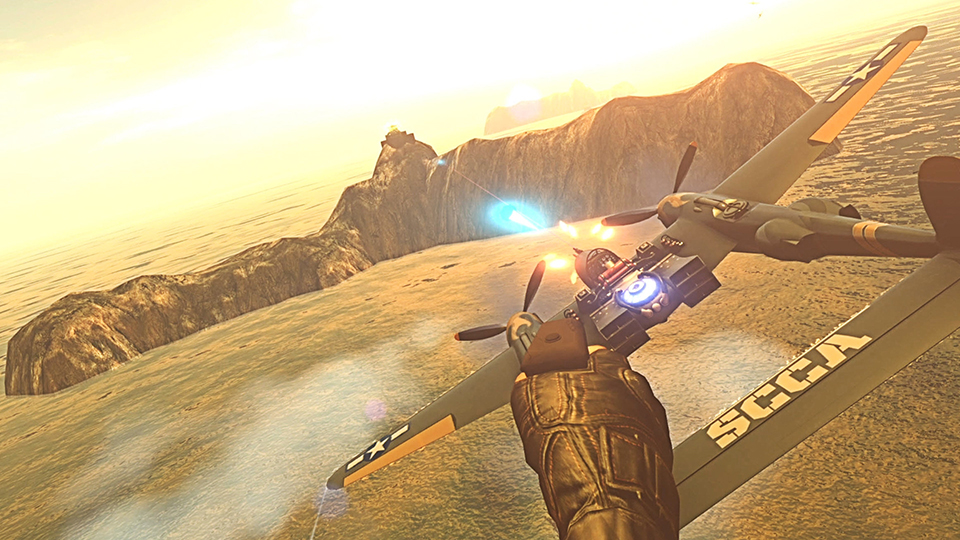 Sometimes ‘Immersion Mode’ places you outside of the cockpit

1976 delivers upon the promise of a top-down shooter in VR but is still hampered by the constraints of the genre.  It’s pretty slick when the 2D stuff goes 3D and gets right in your face, but I found the immersion mode was hampered by the simplistic and sluggish controls. Still, if you are a fan of arcade classics like this than I’m sure you’ll be happy with the package as it delivers classic top-down shooter action in a unique way.

What would I pay? This is roughly $20 US depending on your platform and while not terrible, it feels high considering the repetition involved with the gameloop and I’d be happier with a price half of that as it does feel like a smaller game overall.

Ivanovich Games provided The VR Grid with a press code for this title and, regardless of this review, we thank them for that!