I love stealth games or games that incorporate stealth mechanics, in or out of VR, as acting as a silent assassin or just using my wiles to sneak past the enemy is a very satisfying feeling.  When Espire 1 was announced I was cautiously optimistic that my dreams of a Splinter Cell type game would be finally realized for our headsets as the trailer showed some classic stealth action mixed with the strengths of VR.  In Espire 1, you play as an agent in control of Espire robots, machines designed for stealth and combat, and must infiltrate a facility suspected of some nefarious activity. 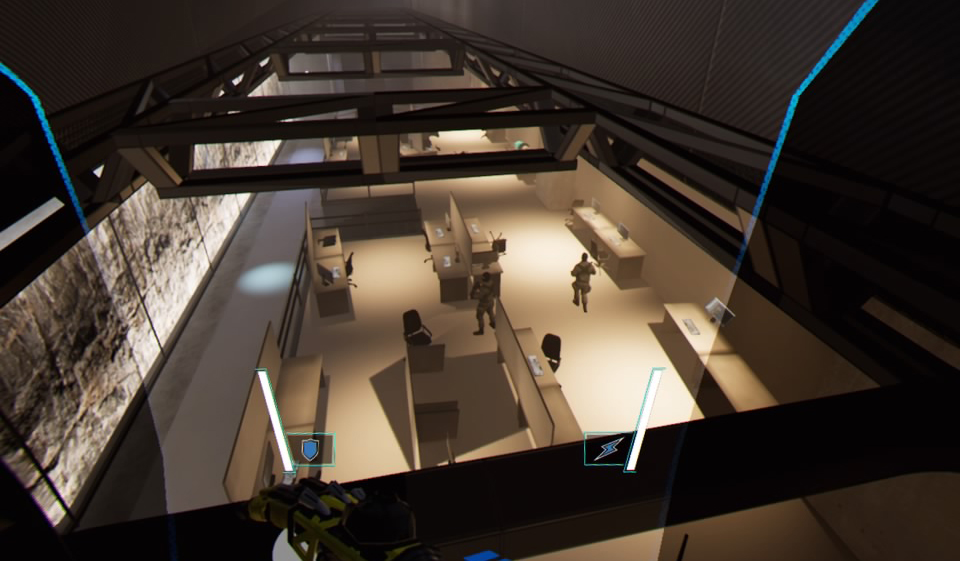 Whether you play this on the PC, Quest or PSVR headsets, it plays the same with the exception of the PS Move controllers which are a little more clunky but for the most part behave in typical FPS fashion with the Move button used to walk while turning is assigned to buttons and the direction your controllers are facing.  Comfort options are available for those that need them so whether you are a VR veteran or have a more sensitive stomach, you should be able to customize the settings to your liking.  You can freely walk around the environments you find yourself in with the added bonus of ducking and sneaking through vents and being able to climb up any metal surface.  You can arm yourself with a pistol and heavier weapon with the former being holstered at your hips and the latter at your chest with corresponding ammo on your belt.  Additionally, you have a multi-tool which is used to heal yourself and interact with computers and machines found throughout the campaign.   Stealth is emphasized as the way to play as you sneak around this rather large facility you find yourself in, using tranquilizer darts and stealth kills or knockouts which can be achieved by sneaking up behind an enemy and yelling “freeze” or stealing their gun from their hands which causes them to immediately surrender and a quick smack the back the head, with your fist or a gun, knocks them out cold which as far as I can tell is the only option whether you hold them up or just sneak up on them making it a little pointless.  If you can get above an enemy, you can simply fall down on them, knocking them unconscious thanks to your heavy robotic Espire operative body.  Other abilities include an infra-red type vision which sees through surfaces and highlights enemies nearby as well as some mountable cameras which can be placed anywhere in a stage and checked in on by looking at your wrists.  Suffice to say it’s a game rife with mechanics which a great thing in theory, but in application things don’t go quite so smoothly but I’ll get to that in a bit. 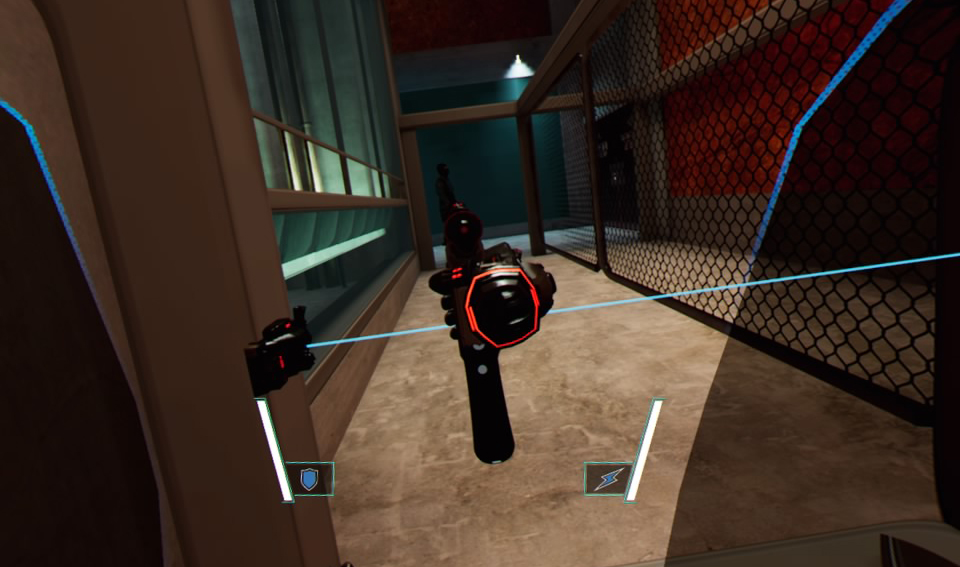 Espire 1’s visuals are alright on either headset though it’s clear that short cuts were taken in some regards making the game look and feel a little more impressive then it actually is and once you see the flaws, you can’t unsee them so the longer you play, the more the games visuals became less appealing, and that goes double for the PSVR version which can be so dark at times that it’s almost unplayable.  A bulk of the game takes place in a sterile facility so many assets are recycled and reused, but it makes sense given the context of the situation you are in.  Enough unique elements are sprinkled in like an underground cave system and outdoor train yard to give variety to the campaign along with smaller and larger stages that have varying degrees of verticality as well as multiple paths to take allowing for choices when it comes dispatching or avoiding the enemy soldiers peppering the game.  The soldiers look alright though only come in a handful of models, but as they are nothing but fodder in your way, it fits in with the nature of the stealth genre.   Useless items are sprinkled around the offices and rooms you’ll visit adding some nice extra little tidbits of immersion to the game.  I encountered no real issues in the visuals on the PC side, but on the PSVR, things are a mess.   Texture and item pop-in is rampant along with incomplete textures or ones that seem to not quite load properly or worse, not at all, making for missing floor panels or invisible barriers which happened during one of the darker sections of the game, making navigation and avoiding enemies next to impossible.  Bottom line here is that the game is alright on the PC side of things but needs a lot more tweaking on the PS side to bring it up to acceptable standards. 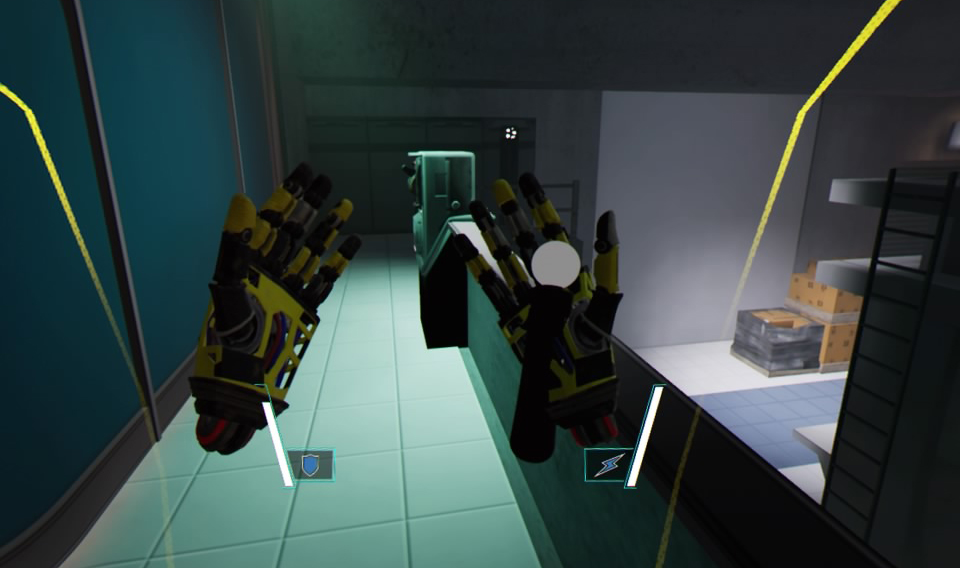 Audio doesn’t fair much better in either version and while the guns and effects sound solid, it’s hampered by the erratic 3D audio, misplaced voice acting and repetitious enemy statements.  Enemies only seem to have 1 of 3 or 4 things say, threatening you with the same remark about outsmarting you or constantly announcing that they are going to do another round before falling back into their travel pattern.  3D audio is present, but impossible to utilize as, for example,  enemies you can hear to your left could be right beside you, 40 ft away, 30 ft high or low and all sound like they are right beside you, under utilizing what should be an immersive way to detect where your foes may be.  Some electronic music plays throughout the game and falls into the background though indicates when you have been spotted and when enemies go off alert and return to their patrols fitting the game seamlessly.  The sounds of you walking or grabbing metal surfaces are unusually loud given that you are supposed to be stealthy and come off more like you are Robocop then a secret agent.  When you combine the erratic audio with the mixed and disappointing visuals, presentation is not Espire 1’s strong suit… but it might still be the best part about this game. 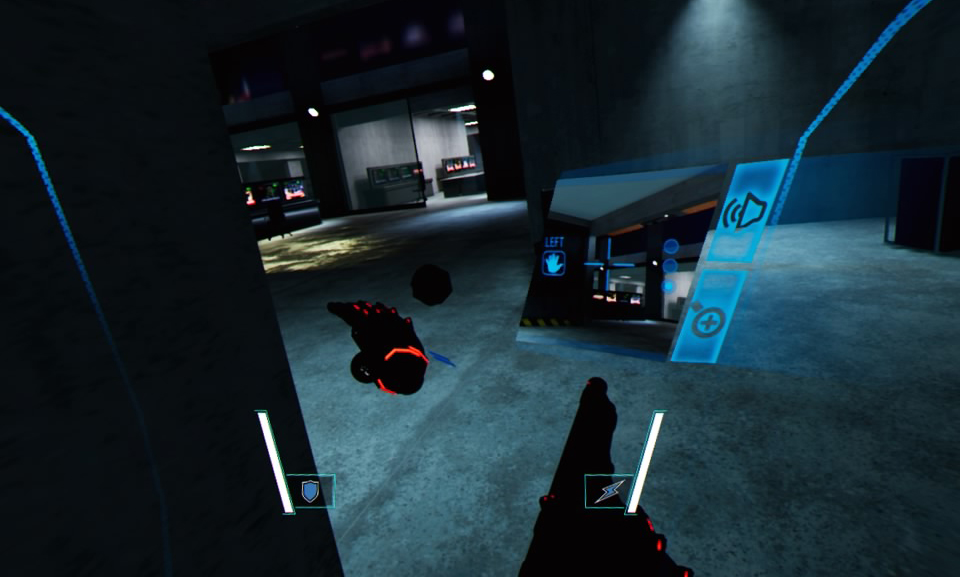 The camera is cool, but ultimately pretty pointless.

The second I heard my clunky metal footsteps, I thought to myself, “what game designer would make a stealth robot sound so loud?” and instead of being left to that slight oversight, I was treated a game rife with mechanics that just can’t be used or are unnecessary thanks in large part to poor AI and confusing level design.  An award system at the end of each stage give you bonus points for things like only using your tranq gun or not killing anyone which once again points to stealth being the key gameplay element in here but so often I was caught in gun fights due to any number of reasons.  It’s impossible to determine if or when enemies will see you as you could be right beside them without them spotting you or have them on the other side of a room spotting you from a ridiculous distance.  Shadows seem to play a factor in how they spot you, but once again, that seems to be unreliable at best and I could even be wrong that lighting can aid you as the enemies were so random at seeing me, I can only assume poor lighting was helping me.  Those soldiers have the intelligence of small children with severe A.D.D as you can murder a host of them in the same room, be spotted by others, have every one of them converge on you BUT, if you can get away for just a few seconds and hide, they will all to soon resume patrolling as if you were never their in the first place.  Soon after starting I stopped considering them a threat, even on the harder difficulty as it was just much easier to exploit their stupidity.  There are 2 difficulties of play here with each one playing almost identically though I think on the harder mode the enemies are more accurate and do more damage.  I’m not totally sure of that as they are still dumb as posts and thanks to the self healing mechanic, if you can find a few seconds away from gunfire, you can restore all your health and kill again.  Ziplines are placed throughout the campaign and their presence makes no sense save to aid your efforts as the soldiers never use the or even climb ladders for that matter.  You must often dodge lasers which quickly becomes more of annoyance then fun. Turrets and cameras are also easily avoidable by simply ducking or just waiting for the tiny viewing area of the cameras to move out of the way…you can shoot them but that just alerts the enemy to your presence.  You can throw your ammo clips to distract the soldiers which is fun at first but like I said, the enemy never gets smarter than the 1st encounter so it feels like I’m picking on them rather then defeating them.  To get the “true” ending of the game you have to beat it on the harder mode, and I recommend doing that as it feels almost no different from the easier mode, though on the PSVR you currently have to play through the campaign on easy before you unlock ‘VR Operative’ difficulty.  There are also “optional” challenge missions which aren’t optional at all as after completing a few missions, you are forced to play through them too unlock the next campaign mission making these bonus mission yet another annoyance as you are forced to play multiple ones before you can progress the story. 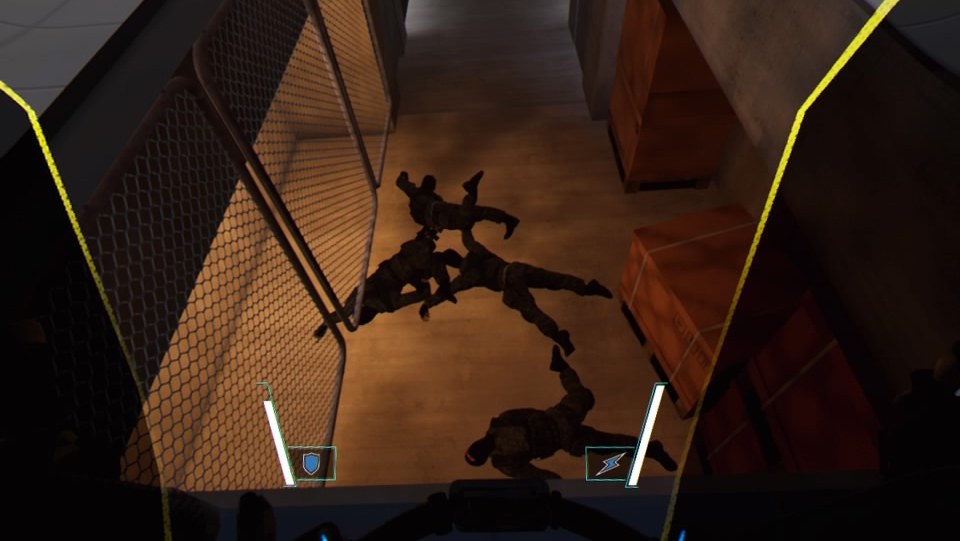 I call this masterpiece “too easy”

Espire 1 is nothing short of disappointing for myself and fails to deliver on any of the promises made nor even coming close to my expectations, which were not that high.  You could spend the time to slowly take out your foes, 1 by 1 in a stealthy manor and be rewarded for your efforts in leaderboard points but you don’t have too and can just shoot your way through every encounter without any real effort or challenge.  In a game such as this, I should feel rewarded for using stealth and instead it just feels like a waste of time as the game constantly tries to ensure that your efforts just wont work.  Even when the game runs as it should and you sneak around through vents or in the rafters, silently taking out your foes, it won’t take more then a few minutes before the fun factor wanes as it feels like you are facing an army of idiots or the game throws some kind of busted mechanic your way.   It plays a lot more smoothly on the PC side of things, but even with that optimization, it still just isn’t that fun.

What would I pay?  In its current state, $30 is way too much.  I personally don’t recommend buying on the PSVR thanks in large part to the increased darkness and visual foibles.  Even on the PC side with things running much smoother, the core mechanics feels unrefined and exploitable.  With a 4 to 6-hour campaign, if you are clamouring for a stealth game, I say $10 tops as it does offer moments of fun but those moments are fleeting and your left with a campaign that feels, cheap, bloated, exploitable and above anything monotonous and boring.