Moonshot Galaxy has finally come the PSVR after being out on other VR platforms for awhile as Galaxy Golf.  In my original review, I derided the game for not being a golf game so I do appreciate the name change.  What you end up with a physics puzzler based loosely around golf mechanics set on tiny planets utilizing motion controllers as claws…make sense? 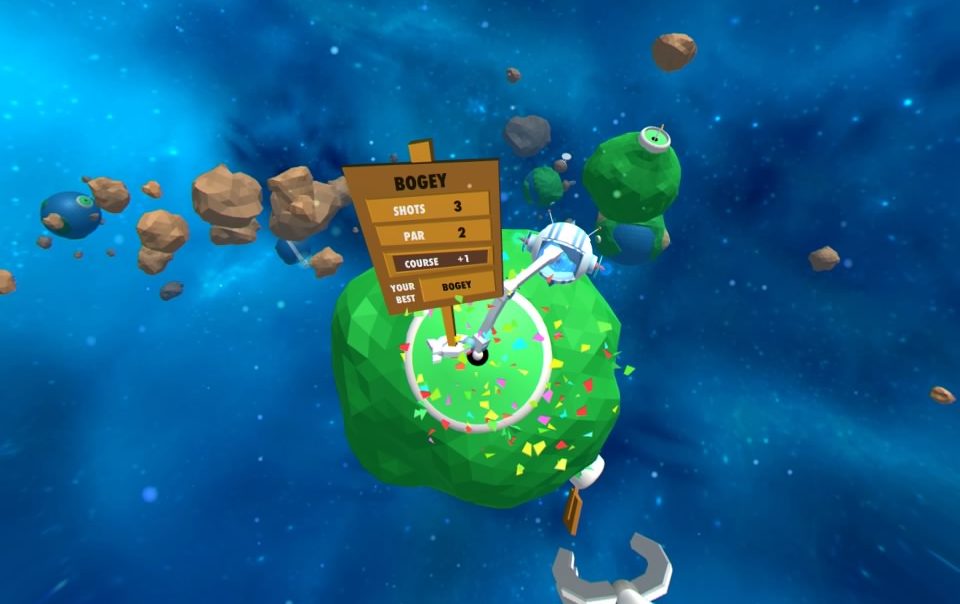 The initial levels are small and super easy, but don’t get fooled, the difficulty ramps up quick!

Taking place over 4 courses containing 9 holes each, and requiring one course to be completed before unlocking the next, there is a decent amount of content here.  Each course has its own unique theme and start off fairly simple before becoming almost insanely complicated.  There are 2 methods of control here and using the DS4 is the quickest way for you to hate this game and probably smash a controller…it’s awful and feels unfair.  Thankfully Move support saves the day…sort of.  While the controls are tight on early stages, simply aim your shot and shoot, once you progress a bit and obstacles pervade the environment, camera issues become a detrimental factor to your fun.  Floating island get in the cameras way forcing you to be unable to make shots until you bob and weave your head or literally claw your way to the ball.  Trial and error will get you past these parts, but they are there and they are annoying.

Pleasant enough to look at, you view each planet from a sort of god-like orbit. Initial levels are basic green land and blue water, but soon enough rocky satellites surround planets as well as conveyor belts and other tracks.  The actual terrain is comprised mainly of shapes stuck together to form most objects and terrain.  It’s a stylized choice that does lends itself well to the casual player with bright colors and a cartoonish art style that is appealing to look at.

The audio is exactly what you would expect with a few golf-like sound effects peppered throughout as well as some more crazier environmental sounds from the more nuts levels.  The soundtrack also fits perfectly with this; never annoying, but never standing out either.

I crushed all 36 holes in about and hour and half (maybe a little less) and initially this game annoyed me.  It wasn’t until halfway through the second course that I began to find my groove and adjust to the Move control scheme.  Latter courses are a borderline nightmare at 1st glance and require patience and a little luck.  However, shots I thought were impossible I ended up making, and after more than a few lucky shots I began to see the skill behind my attempts.  Obstacles, like moving platforms and rotating barriers, force you to adapt and pick up your game while mine carts and propulsion fans flip the gameplay on its head.  I’ll say it again, this is a physics puzzler, not a golf game. 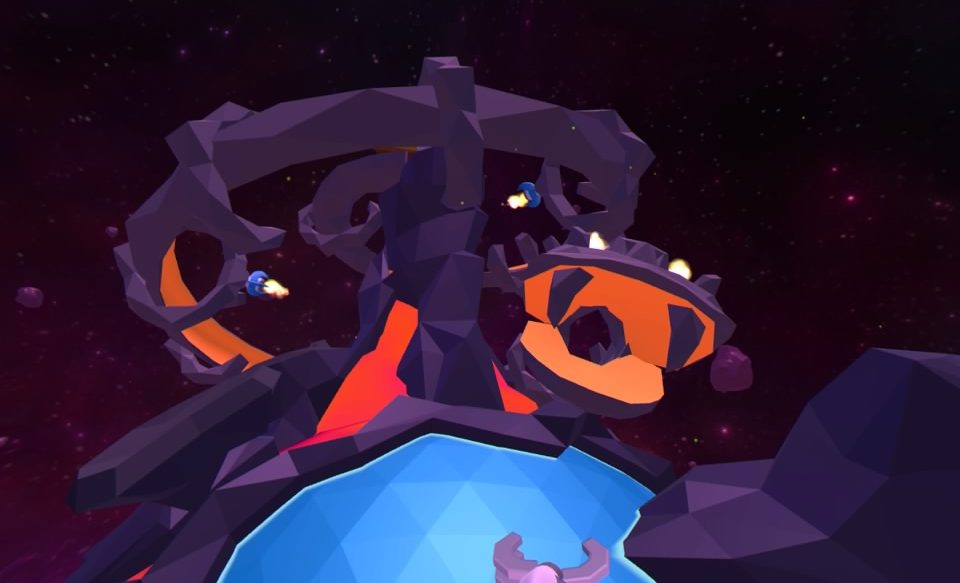 Yup, you gotta shoot your ball into the mouth of that giant stone snake.

I never made par on any of the courses through my 1st run on the courses, but came a lot closer on my second run and that’s where the game earns it value.  Beating your previous score and climbing the leaderboards is where this games lasting appeal lies.  Levels may seem simple, but one messed up shot and their goes your perfect run.  Each hole will only take you a few minutes at most to complete and repeat attempts should take less time as you improve so coming back for 20 minutes to play will probably result in some satisfying game time.

This is fun, but it took me a little time to appreciate it.  Camera and corresponding control issues still annoy but patience and perseverance will bypass those obstacles.  Making par still seems unattainable to me for most of the courses, but leaderboards show me that a few people have made it so it is possible and I do seem to be getting steadily better.  If you are looking for something a little different and golf/puzzle games don’t offend you, this is probably worth a purchase.

What would I pay? $10US.  It’s a short game but contains some decent replay value.  It’s fun, challenging and a little frustrating, and that’s the recipe for a decent physics based puzzler.

Big Fish Games provided a review copy of this title and, regardless of our review, we thank them for that!