Stardust Odyssey puts you in the shoes of a smuggler, piloting a small ship though large flying convoys, stealing loot and acquiring powers and abilities needed to fight the big bad threatening the universe. 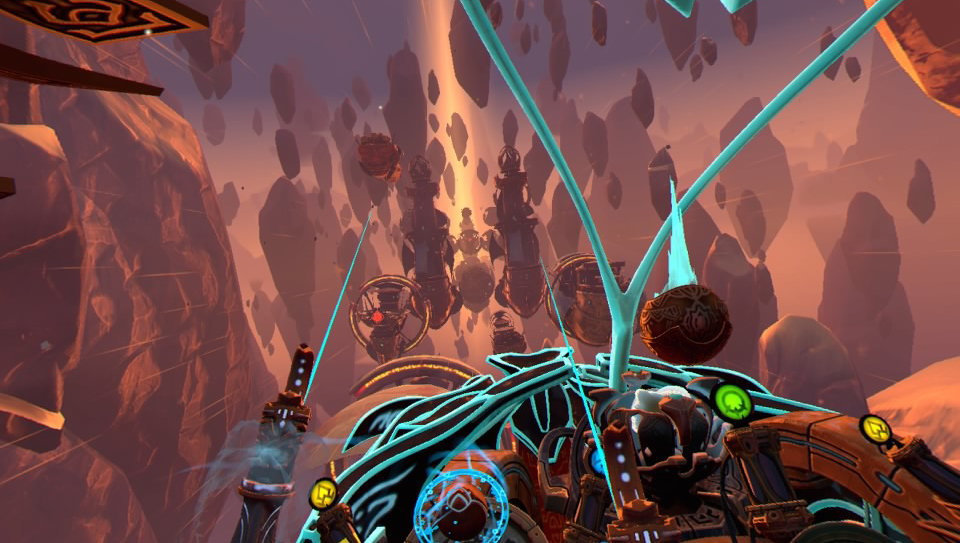 Every stage is a sight to behold

This is a Move Controller affair utilizing a unique control scheme where one of your hands pilots the ship by managing an energy beam on a nearby circle which acts as a sort of virtual direction pad for your ship.  The convoys you fly through are rather large continuing in lengths out of sight with a multitude of ships flying around you which may contain loot or provide cover.  Each convoy travels in a sort of tube which only shows itself when you venture to far away from the ships and also halts your movements forcing to play the game and not cheat the system.  That system involves a fair bit of action, stealth and strategy as the convoys you are looting are protected by defensive drones that scour the convoy in search rabble rousers such as yourself.  Mechanics are introduced slowly, which is a good thing as there are plenty. 1: 07Besides flight, which allows for full movement of your ship save for turning which is not needed as you are only moving forwards or backwards and around the convoy, you can use magical yellow energy to fire laser blasts at your foes, generate shields for temporary invulnerability, launch very powerful bombs and a bunch more with optional buffs being acquired as you progress though the campaign.  These buffs allow for faster regeneration of the various types of energy you’ll be using or unlock more slots for your active weapons and abilities and can be purchased using the loot you steal in each stage.  To progress to the next stage you need to find Ether, which is hidden through each convoy, and can be easily looted except where specific powers are needed access them, meaning to nab all the Ether in a stage, you’ll have to revisit them at least twice, and probably more as you unlock new powers and abilities.  Each stage designates how much Ether you need to unlock it with 14 stages in total, broken up by checkpoints which can be revisited at any time once you have reached that point in a stage. 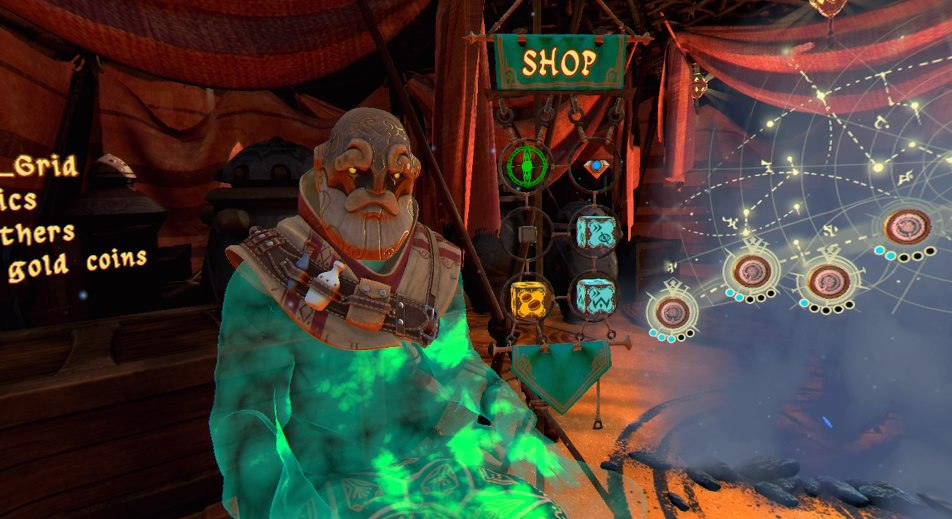 Stardust Odyssey is an impressive looking game with each stage giving you a lot to behold. The ships fly all around you and come in all shapes and sizes from small little rickshaw like boats to larger fish-like animals dragging huge amounts of lumber behind them.  Outside of the convoy could be a desert landscape, floating rocks, cliff sides, caverns or whatever and above anything else every stage looks unique and amazing as you travel through them.  Those drones appear in the distance, sometimes just as a silhouette though they can sneak up on you as some travel through the convoy in search of you.  You’ll run into a variety of enemies from smaller robots to larger boss battles that are epic in scale.  All this is done to a cartoonish and exaggerated art style utilizing bright and contrasting color palettes that pop in the headset.  Joining you on your journey is a guide who appears as a floating head in your ship as he introduces you to each new gaming element.  Giant lighthouses indicate when you have reached those returnable checkpoints in a stage with a few smaller checkpoints in each stage as well that you to return to that point should you die.  Your cockpit is fully realized and quite busy with all your powers and abilities being within arms reach, typically indicated by orbs or cubes you need to grab and activate.  All in all, I was quite impressed by the look and style of the game and the mythos surrounding this universe.

There is a lot of voice acting in here with each guide providing not just info on your next gaming mechanics but providing story and context to each stage.  The soundtrack is also stunning and carries oriental themes that sound both epic and subdued rising and falling with the action.  It’s the kind of music you here in films and bigger budget games and while I didn’t always notice it as I was focused on the game, when I did, I couldn’t help but appreciate it as it really sounds amazing. The 3d audio is also great with storms occasionally happening all around you while those drones try to take you out but with almost everything always happening at a distance, I couldn’t really tell just how effective the 3d effects were. 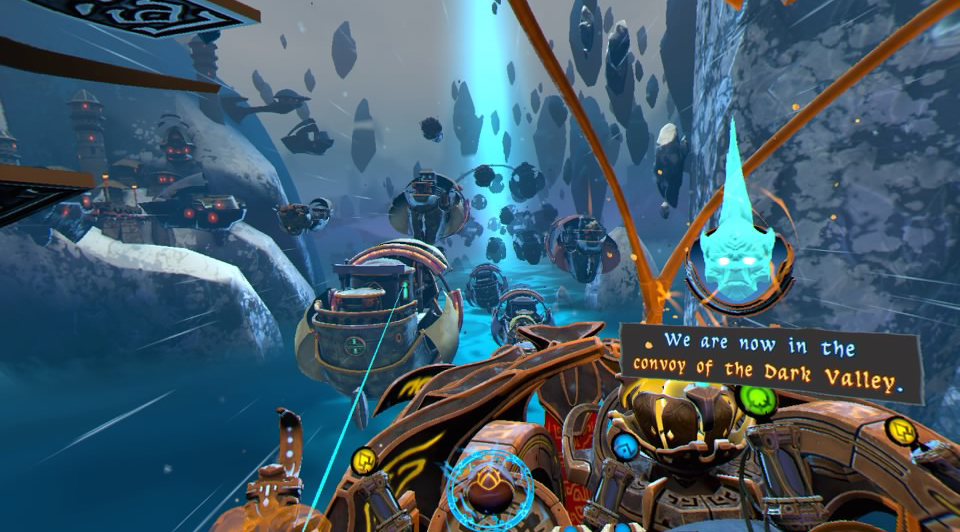 What’s great about this game is that you can play the game alone or with a friend in online co-op action with your partner sitting beside you in the co-pilots seat.  Playing together allows you to pool your resources to be a more dangerous ship as you effectively double your abilities.  Should one player have more unlocks then the other, then that superior player still gets to use all of those abilities without being stunted.  Playing together makes the game easier and what seems like an awesome addition to the campaign turns into an almost necessity with the latter half of the levels becoming very, very difficult, especially if you are alone.   There is no lobby system so there’s is no way to tell if anyone is online trying to hook up meaning you may be left to your own devices unless you can coordinate a co-op match through other means.  I like the challenge presented here, but it can often times be incredibly frustrating when you die at the same point again and again, forced back to your last checkpoint which could be 5 or 10 minutes away from where you perished only to repeat the process again as you slowly figure out how to defeat those enemies.   I’m not going to begrudge the game for these challenging moments but it’s a point to be aware of as playing alone can really put the pressure on.  To counter those difficulty spikes is the shop where you can purchase upgrades with the loot you’ve stolen from the ship whether you complete a mission or not.  In this regard progression is sort of assured as each new purchase should allow for a slightly easier time.  I’m also not the biggest fan of being forced to replay stages already beaten just find an item I couldn’t get on my 1st run though I took way less offence to that style of grind here as the lighthouse system allows you to jump right to point where you need to get the missing Ether and in truth, revisiting those stages was a treat to have another look at the stellar presentation. 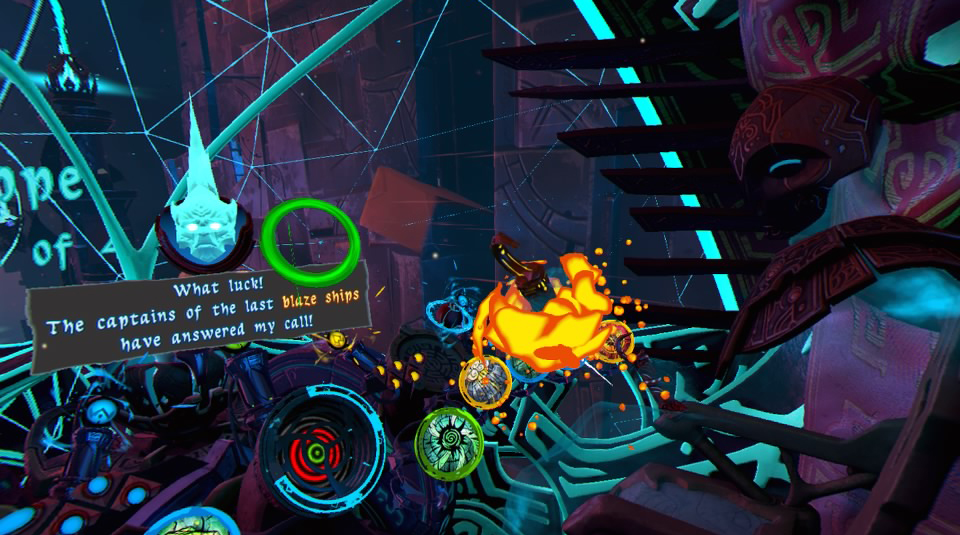 It’s fun alone, but better with a friend

The gameplay is initially quite simple with you navigating the nomadic ships and trying to get around the drones but each new element, whether it’s a new enemy type. environmental hazard or buff adds layer after layer of depth to this game.  My initial thoughts were that this felt like a mode from a larger game but after I reached the 3rd stage, and beyond, it soon became apparent just how much care has gone into this game both in presentation and mechanics.  I’m hooked and can’t wait to hop back into the pilot’s seat and venture through these stages, hopefully with a friend as the game is good solo, but great with buddy at your side.

What would I pay?  I am totally cool with the $35 asking price on this.  The campaign will take at least 6 to 8 hours to get through and I think for many of us, it will last longer then that.  Co-op is the icing on the cake and this game shows us there’s still plenty of life left in the PSVR.

Agharta Studio provided The VR Grid with a press code for this title and, regardless of this review, we thank them for that!