I can honestly say I have been looking forward to playing a Third-person action adventure game on  PSVR since I played Herobound on the Gear VR some time ago.   Enter Theseus, a different take on the Minotaur in the Maze tales of old utilizing VR in new and innovative ways. 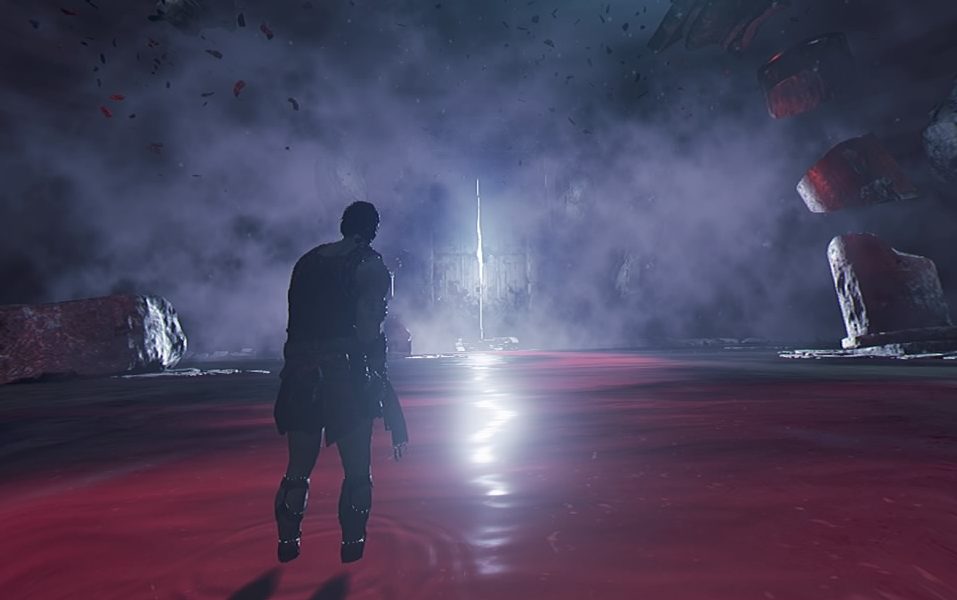 Limbo offers up some starkly beautiful images that are mesmerizing

You control the title character Theseus, a man dressed like a (Greek?) soldier who wakes in a large Stone room.  From here you progress  through open doorways, large cracks in walls and catacombs in your quest to defeat the minotaur and find your way to the light.  It’s classic 3rd person action here using a DS4 controller, so if you have played any title in this genre (Uncharted, God of War…) you’ll figure out how to move around fairly quick.  Hack and slash, dodge, run, sprint..no jumping, but you can ascend and descend select areas.  So how does this work in VR…pretty damned good in my opinion.  This plays almost like classic Resident Evil or Silent Hill games with your headset being a mounted camera in each room you move Theseus too.  This is broken up more personal moments where the camera becomes fixed over Theseus’ shoulder making for some more cinematic sections.  A nice touch here was when you looked around, Theseus’s head matches your movements, adding some subtle immersion.

This is a linear story, it’s designed to be that way, which is a good choice as you are constantly advancing through the narrative, making for a more focused game.  A little like Fated: The Silent Oath, only with a little more emphasis on action and less on personal interaction.  While the initial 30 min or so containing little in the way of excitement, it sets up the world wonderfully and makes you feel like you are playing a AAA title.  It’s not, and analyzing any particular detail reveals subtle flaws that are easily forgivable considering what’s presented, but they will add up over the course of the 2 hour(ish) campaign.  Theseus doesn’t speak, some animations are a little jerky and repeat themselves often, but that’s only noticeable when multiple enemies attack you at the same time, along with a few other minor quirks that pop up throughout your playthrough(s). 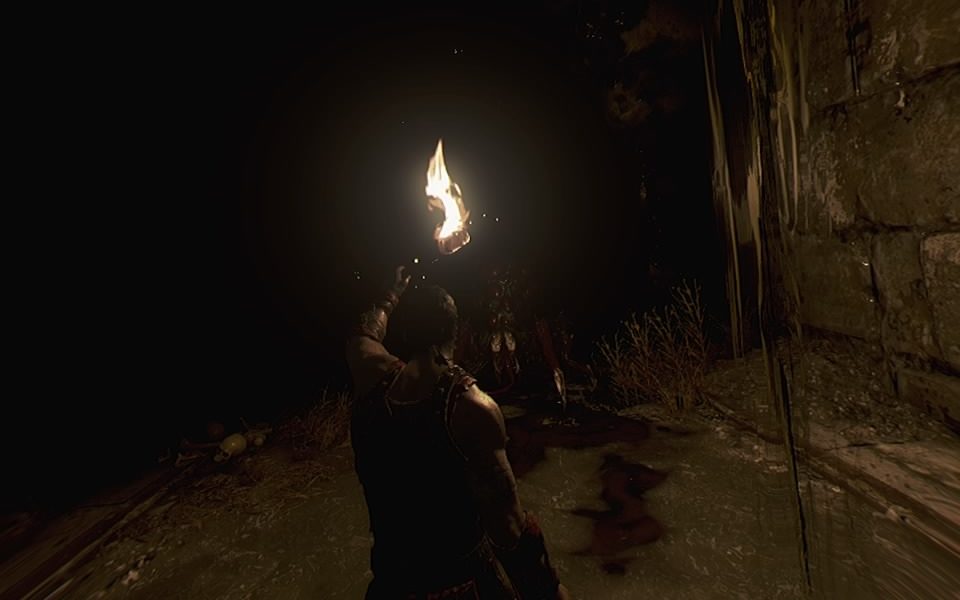 The darkness is not your friend as what lurks within is out to get you.

This game is undeniably beautiful…in a dark and gritty sort of way.  This labyrinth is a wonder with crumbling walls, broken statues, some dynamic lighting and a host of other details that make this feel like a real place.  Climbing over a giant expanse or running passed those giant statues elicits a great sense of scale. The minotaur is a spectacle to behold and every time he shows up you know you are in for a world of hurt.  It’s a great looking and overall the visuals don’t detract at all and impressed me throughout the whole game, heck I even enjoyed the subtitles!

The emotion you’ll experience can only be aided by an amazing soundtrack and audio effects.  The music is on point making epic moments feel more epic and solemn moments more solemn.  The minotaur sounds just as scary he looks and all the other effects fit perfectly.  One sided conversations elicit emotions of panic, tension and, coupled with the action happening before your eyes, make for an amazing and stirring ride.

It’s not all praise here and while I have compared this to larger, similar titles in many cases it doesn’t reach the high bar set by its ‘flat’ predecessors.  Your 3 weapons are a sword, torch and shield and combat boils down to basic button mashing and dodging, with little to no effort needed other than smashing ‘X’.  There are only 2 enemy types here, the minotaur and his spawn, so memorizing the pattern of attack from those lesser foes is easy enough.  The only puzzle mechanics here are timed, press a switch and get out the triggered door without getting hit.  You’ll die the 1st few times this mechanic comes up, but it becomes apparent what the game is asking you to do, and that doesn’t really change for the duration of your quest.  Climbing portions don’t offer any challenge or thought and just involve you finding the right path and pushing on, they do mix up gameplay, but offer little else.

A few other are elements at play here with some dream sequence(limbo) events breaking up the platforming and the torch mechanic adds a bit of depth to enemy encounters and stealth portions of the game.  This is a crazy busy game with a lot going on.  It never wears out its welcome and when the end actually came, I was a little shocked at the short length, mainly because I just wanted to play more.  There are 2 endings to this game and getting the ‘true’ ending involves interacting with everything the game allows you to and exploring every nook and cranny possible.  I suspect that most will fail on their first attempt to find everything needed and be forced to play through a second time, but that second ending does ‘close’ the story off better than the first. 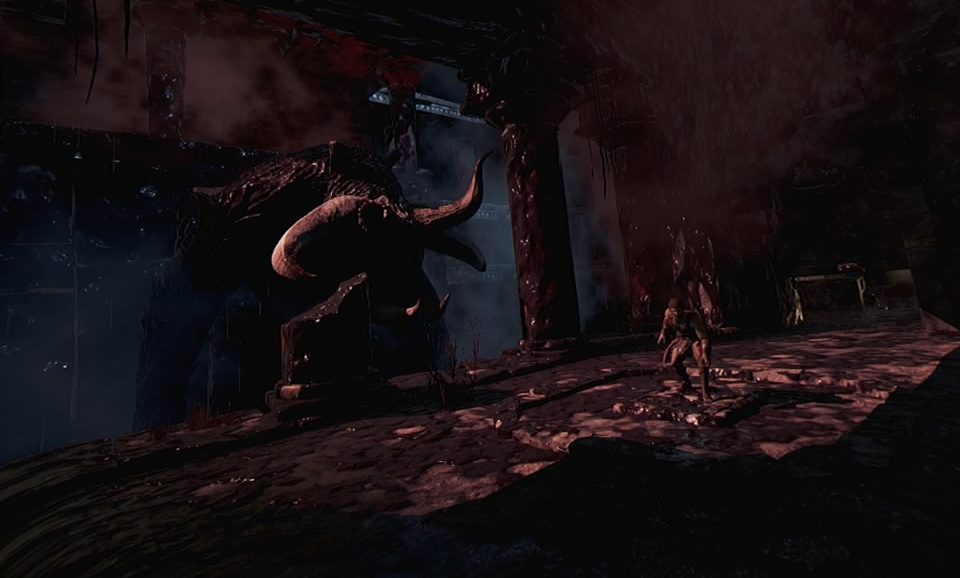 If he sees you…you are probably about to die!

Flaws aside this was a pretty fun game with an intriguing story and some cool moments!  It’s a mixture of whole bunch of games you have played before, but you have never played a game like this in VR.  It’s not the most immersive VR experience and it’s not designed to be.  The length will definitely be the main issue of contention, but I was still satisfied with the journey and had no problem venturing back in the labyrinth for a second playthrough too unlock the true ending.  This is great fun!

What would I pay? I would pay $20.  The content may seem light to many people, but the presentation, story and overall polish show that these titles belong in VR just like other more immersive ones.  While not perfect by any stretch I enjoyed every minute of gameplay!

Forge Reply provided theVRgrid.com with a review copy of this game and, regardless of our score, we thank them for that!