For those that are unaware, LA Noire was released many moons ago on last gen consoles and put you in the shoes of a detective, solving crimes in 1940’s LA.  The VR case files is not the full VR translation of the original game, but rather 7 select cases put together to make for a miniature VR version of that now classic title. 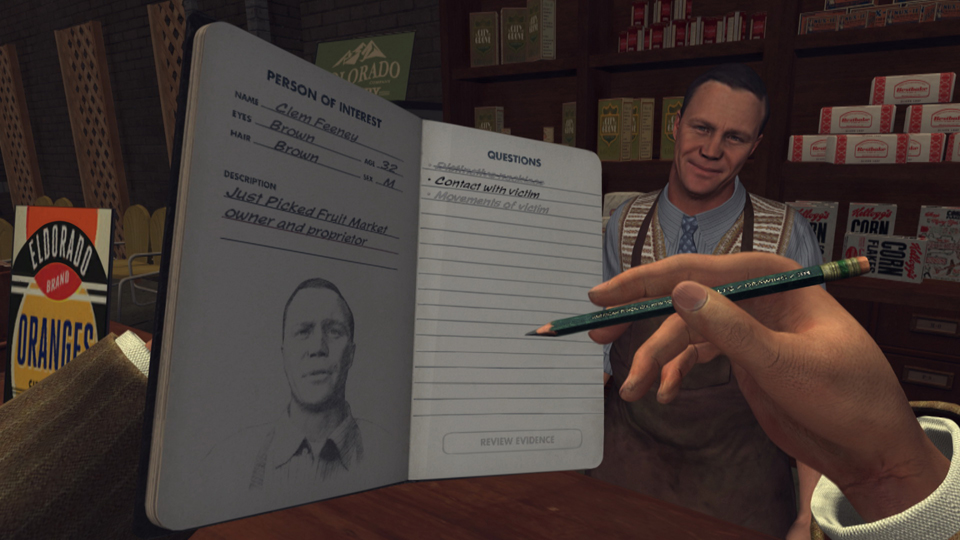 Apparently you are an excellent artist!

With the Moves, you can’t use anything else, controls are context sensitive based upon the situation the game puts you in.  As you investigate crime scenes on foot, you can walk around with full locomotion or, for those that need them a host of comfort options are available and check out items scattered around each area.  Clues discovered will be automatically added to your notebook, kept in your pocket, and once you have found all the clues in the area, the game will usher you on to the next location.  Typically, you will handle that yourself by getting into your nearby vehicle and driving around LA.  In driving mode, you need to start the car with a turn of the key before driving around.  You grab the wheel with both hands and can perform some extra immersive actions like honking your horn or turning on your sirens.  Occasionally you will be involved in some shootouts which get intense as you hop from cover to cover, trying no get hit while taking out the bad guys.  Other times you’ll have to run down a fleeing suspect which more often then not, ends in a fist fight with the final mode in the game being that  of interrogation, which was a mechanic LA Noire was applauded for when it originally released.  In this mode you have to watch a suspects reactions carefully and determine the proper course from  3 actions (Good Cop, Bad Cop, Accuse) and depending upon how successful you are at reading their faces, they may divulge the information you need to solve the case.  Should you choose you can free roam many of the locations you find yourself in or just cruise around LA, which is populated by heavy traffic and a decent number of pedestrians giving the game an excellent sense of realism.

LA Noire is visually stunning at times and it’s clear that even though this is a stripped back version of the game content wise, the port to VR let’s the visuals shine like very few games in any headset. LA Noire was praised for its facial animations, which were motion captured from live actors then supplanted on 3D models which makes some near photo-realistic moments when you interact with anyone around you.  VR has you in 1st person and because of that, everything is right in your face, highlighting just how impressive the motion capture of the actors is.  Watching for the most subtle (and not so subtle) character reactions when you ask them questions is an absolute treat and had me forgetting I was in a game as I took on those performances.  1947 LA is captured beautifully and it’s commendable just how much a trip through time this is.  Just driving through the city, day or night, is a thrill as you take in all the sight.  Landmarks are scattered around the city and will be marked on your GPS (a not-so-1940’s device needed to drive from point to point) though serve no purpose except to let you know when you have discovered something.   Throughout the 7 stages you’ll visit jewellery stores, factories, a few homes, the police station and a host more locations that make this city feel authentic. 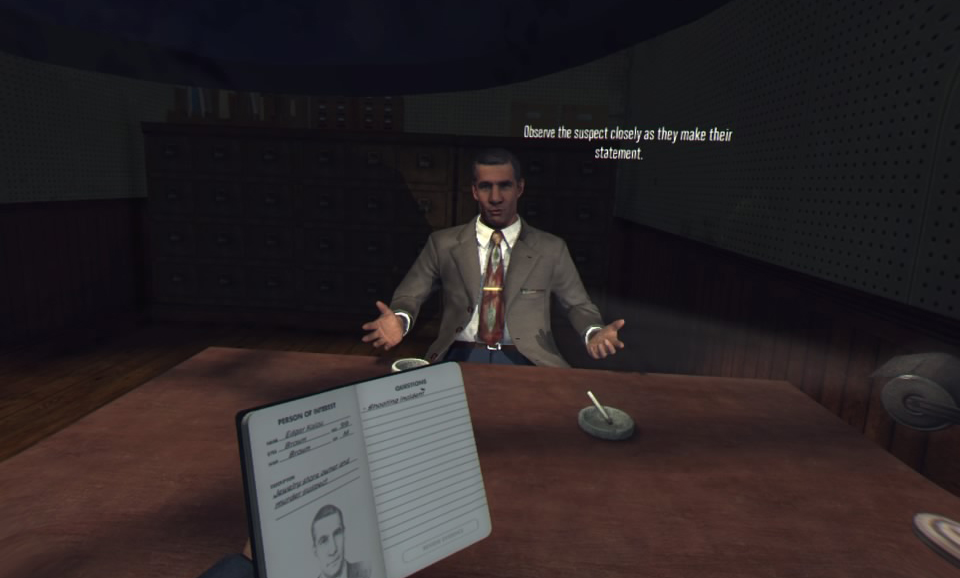 Interrogations are a lot of fun!

The performances are the star of the show and the acting in here is top notch.  Everyone is voiced by talented actors along and when you combine that with the attention to detail in each action from opening door, dropping specific items that make unique sounds, the gun fights and banter between you and  your partners makes each individual case so entertaining.  I will say that I did find the voices to be too loud to a point where it just seemed like they were all around me, even with the 3D audio, though by no means was this a game breaker.

Extra care was taken in porting this to VR, very similar to what we say in the recent patch for No Man’s Sky.  Adding extra immersion is the small stuff, like knocking and opening doors, holding items, or even just removing your hat.  Physically reaching to your chest for your notepad or replacing the clip in your gun, as if you would in real life (more or less) makes this feel like a game built for VR.  Unfortunately, that is not the case and this stripped-down version of the game does suffer because off that lighter content. Playing through the 7 missions, and bonus stuff, will take you anywhere from 5 to 7 hours depending on how you play the game and each case is a nice little slice of the detective life with their unique moments.  Where the VR Case Files fails is the story, which is essentially absent as you hop from one case to the next with start of the game having Cole Phelps (i.e. you) as a beat cop, slowly climbing the ranks with each successful case.  In fact, there is so little story here that those looking for that should honestly look elsewhere.  Sure your captain may praise you after a successful interrogation or your partner will pat you on the back when the job is done, but when a case is completed, you are booted back to your office where you can choose the next case, in any order you want.  The controls also leave a lot to be desired and I was constantly fumbling with simple mechanics and hitting numerous glitches and hiccups that caused a lot of unnecessary repetition. 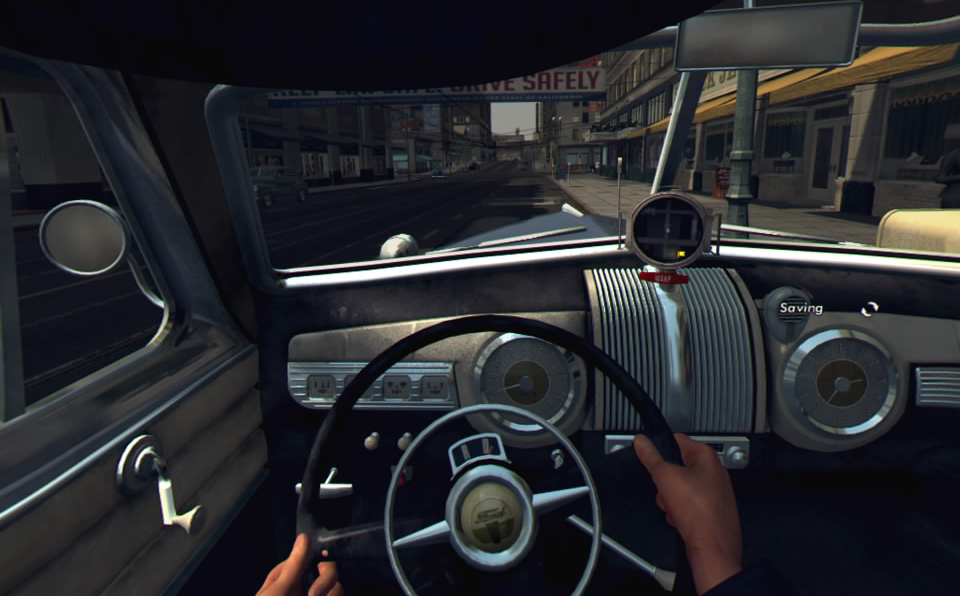 Cruising through LA is impressive in VR.

To select many in game interactions and choices, you pick them from your notebook by pointing a pen in your hand at what topic you want to explore.  On numerous occasions the game refused to acknowledge my selection forcing me to try again or even reload my game, which almost always fixed my issues.  Every time you transition from your car, or leave specific building the game cuts to black momentarily which was also a little annoying though understandable but depending upon your comfort settings you could see a balc screen every time you hit a wall or just move to fast into a barrier causing way to many fade to black moments.  Finally, having not played the original game, I could just tell that many interactions have been removes from this game leaving me wanting more.  I ran into a woman being accosted by a man and she asked me to ‘deal with him’ and I was delighted to.  Upon catching up with him I couldn’t interact with him in anyway and those missing interactions plague this game.  Driving through traffic like a mad man, colliding with both people and cars results in nothing more then your partner chastising your skills and I just got the feeling like I was missing out on a larger game. 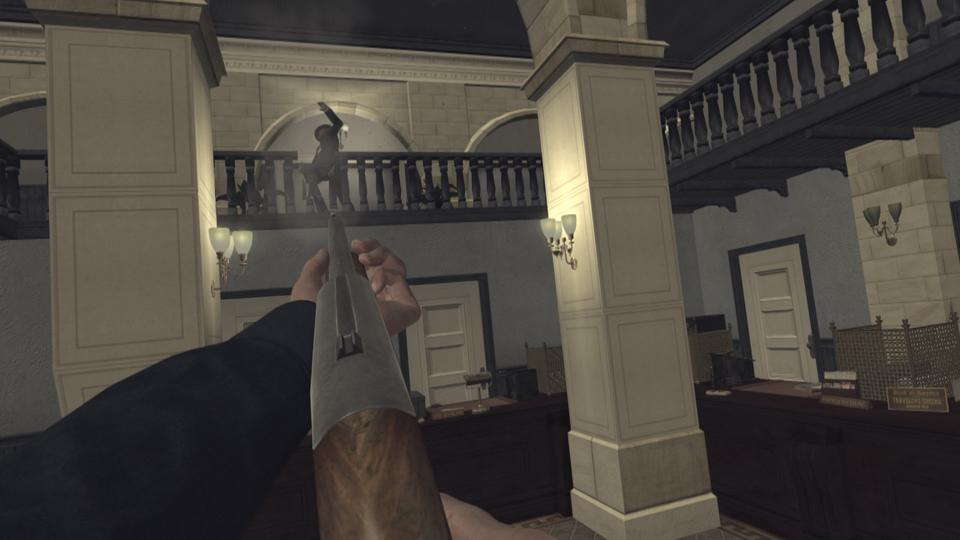 The gun fights are a riot!

I think ultimately, that’s how you need to look at The VR Case Files and really, the name says it all.   This is not the VR version of LA Noire, but rather a fun little compilation of 1940’s detective stories without any cohesive narrative.  The presentation shines as some of the best we have seen in the headset and the level of detail in this gaming world is impressive.  Playing through each case is fun and they differentiate enough to keep you intrigued.  The interrogation mechanics are simple but the presentation in these moments is just so damned effective that it’s a joy to try and decipher how to treat your suspects.  Despite the issues I brought up, I was addicted to this game from start finish and while I wish I had more, I’m more then happy with this game as it stands today.

What would I pay?  This is $30 US and well worth it.  The campaign alone justifies that price and the attention to detail is just straight up impressive.  If you are interested in just a taste of the future of VR, Case Files delivers an unparalleled, but restricted glimpse into where VR is heading.