The one word that EVERYONE uses when it comes to Virtual Reality Games and experiences is ‘Immersion’ and for good reason.  VR puts you inside the game and, along with the base headset and controllers, is a plethora of peripherals that aim to further immerse you in the experience, blurring the lines between the real and the virtual.  We have haptic vests, gun stocks, treadmills, bikes and a host more all offering different ways to make your VR experience more ‘real’.  Enter the DecaMove, a tiny little addition to PC gaming that looks to make turning in VR feel a little more natural by separating your head and hip movements, but just how much does that matter?

For starters, let’s just quickly cover the quality of the DecaMove which is mostly hit, but a little miss.   The box and packaging are solid and high quality with the various components all packed in snuggly and looks professional.  In the box is a USB dongle and antenna, the DecaMove hip sensor, USB charging cable and instruction booklet and that all looks fine, save for the hip sensor which looks and feels cheap thanks to its lightweight design that feels fragile as well.  That said, the components seem to be solidly built with the main button having a satisfying ‘click’ and when on, lights up thanks to a multicolored LED.  All in all, I’m happy with the physical qualities of the device and while it feels cheap in hand, once I strapped it to my waist, it became a non-issue as a I focused on gaming.

Setup is easy enough as you need to attach the antenna to the dongle and install the Decahub software which will allow you to pair the DecaMove to your PC which is as simple as pressing the center button, which will automatically connect to the sensor.  Initial calibration involves you following on screen instructions that has you rotating the DecaMove in multiple directions 180 degrees and once calibrated, it’s almost good to go. After this step you can load a game using the Decahub software, which lists every game installed on your PC and marks which ones are known to work with the DecaMove with a check mark.  Once you’re in game and have it connected to your waist, the final step is to calibrate it to your forward-facing position in the headset which requires both hands to be placed at waist level while looking straight ahead whereupon an overlayed “calibrating” message will pop up and if you look at your feet, you can see a circle around you indicating which direction the DecaMove is facing.  It sounds a little complicated but really won’t take more than 30 seconds to calibrate fully though you may have to perform the quick calibration as the magnetometer in the DecaMove can lose track of your forward-facing position after 20 or 30 minutes.  A full charge should last around 3-hours with the unit taking just over 30 minutes to fully charge. 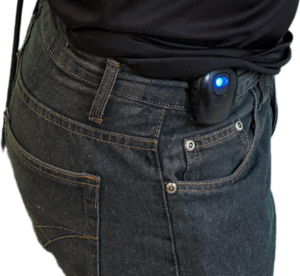 So, what exactly does this device mean in regard to your VR experience?  It makes things feel a little more realistic by tracking natural body movements (specifically hip turning) while still allowing you to look in other directions without messing with the direction you are moving.  This is most noticeable in shooters as now you can move forward while turning your upper body without having to worry about the position of your thumb sticks as you just need to press forward while keeping your hips centred and still being able aim roughly 160 degrees in front of you, or however much you can twist your upper body. It’s a subtle difference in the VR experience and in truth it took me some time to really figure out what exactly was different in the games I was playing but once I did, it was hard to go back to just a headset and thumbsticks to move.  In no way does this come close to full body tracking, but that extra rotation point does make VR games feel slightly more natural.  The best use of this, in my opinion, is in tactical shooters like Onward or Contractors, where you can focus on aiming down the sites while moving in whichever direction you want without having to worry about thumbsticks as you really only need to move forward or backup with your body handling the rest.  It’s not going to change the game in any significant way, but I think those that use this on a regular basis will have a slight advantage when playing online shooters.  I can’t emphasize enough that the advantage would be slight at best, but it’s there for sure and like I said, going back to not using the DecaMove, I couldn’t help but miss its subtle integration.

The DecaMove is advertised as working with a lot of games and is not limited to the games listed on the DecaGear website, with that list comprising of roughly 30 games or less depending on which headset you use.  In my time experimenting with various un-supported titles, I never got it to work properly, if at all, leaving the supported games list a little light as of this review. It should also be noted that the DecaMove works in conjunction with steam only so any Quest owners wanting hip tracking will be forced to tether or use Virtual Desktop to play their games with this device. 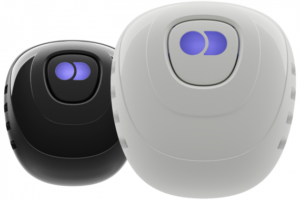 The DecaMove isn’t a game changer, and those who don’t get it really aren’t missing out on a lot, but I can’t deny that it does increase immersion and because of it’s ease of setup, I find myself recommending it, assuming you have the extra cash to spare and have a few games in the supported library.   Being able to look around while moving in a different direction isn’t new and can be handled by thumbsticks BUT that is typically a little clunky with it being easier to pull of by just directing your hips in the direction you want to walk.  VR gaming is littered with peripherals all designed to increase immersion in one way or another and the DecaMove is nice littler contraption the makes the VR gaming experience just a little better.

What would I pay? If you have the coin and are looking to add a little more immersion to a few games in your library, than I recommend this as the $60 price tag on this is a decent one considering other comparable peripherals.  That said, if the small number of supported games is a concern for you, then maybe hold off and see if more games get DecaMove support.