The 3rd Wizard based title has arrived for the PSVR this year with Wands having been available across every other headset since it’s original Gear VR release back in 2016.  Wands has been praised for it’s use of VR as it pits players against each in online magical duels using a variety spells and staves to protect you and deal out damage. 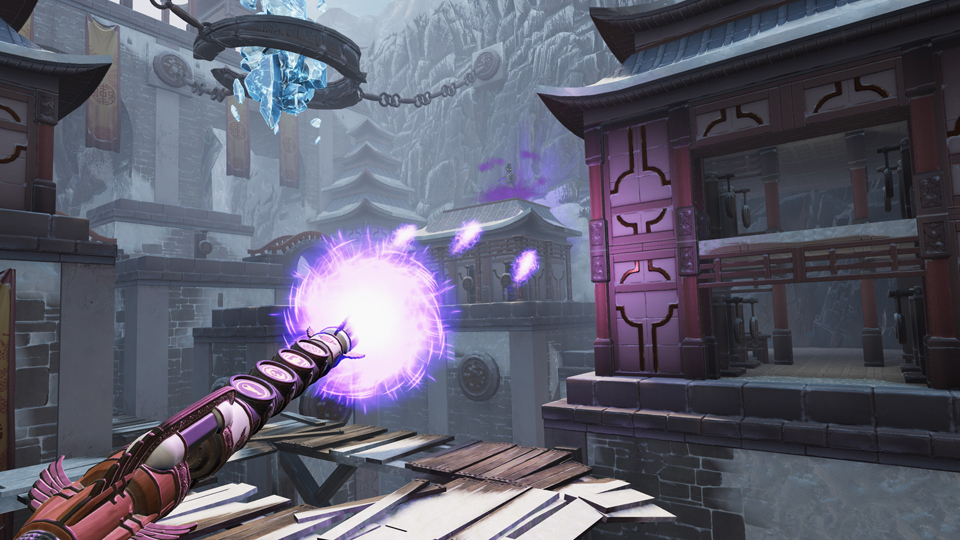 Choose your spell and unleash!

If you have played this on any headset then you’ll be instantly familiar with the mechanics as no matter which headset you play this on, it plays identically save for any headset specific controllers.  You can use the DS4 or 2 Moves with each having distinct disadvantages and advantages over not just each other, but other headsets as well.   The DS4 uses the thumbsticks to turn though defaults to head tracking to target your foes and nodes while the Moves allow for tracked hands giving you a little more freedom when it comes to aiming your spells, but at the cost of assigning turning to button presses which doesn’t feel as natural.   After a very wordy tutorial which breaks down all the games various mechanics, you’re free to jump into private matches against the AI or ranked online matches to test your skills against other human foes.  When you start the game, many spells are locked and need to be purchased making it a little challenging when you first start as you may be facing foes with spells you aren’t familiar with and who are much more familiar with the game.  Playing against the AI is alright though the game seems to automatically match you with AI equivalent to your level essentially making them as dumb as posts in the early goings of the game.  Your staff can be loaded with 4 spells (out of 25 total) and have a very nice variety ranging from defensive shields to poisonous gases, lightning strikes and a host of others.  Where things get…interesting is the movement mechanics which will the most divisive topic in this game.  90 degree click-turning is the only option as is the node-based teleportation mechanic with each map having a whole bunch of pre-determined points you can move to.  Most of the levels are dynamic with paths opening up or being blocked along with other level specific obstacles which adds a nice layer of strategy.  Every match is 1 round with loot given out whether you win or lose and whether you face the AI or human opponents. 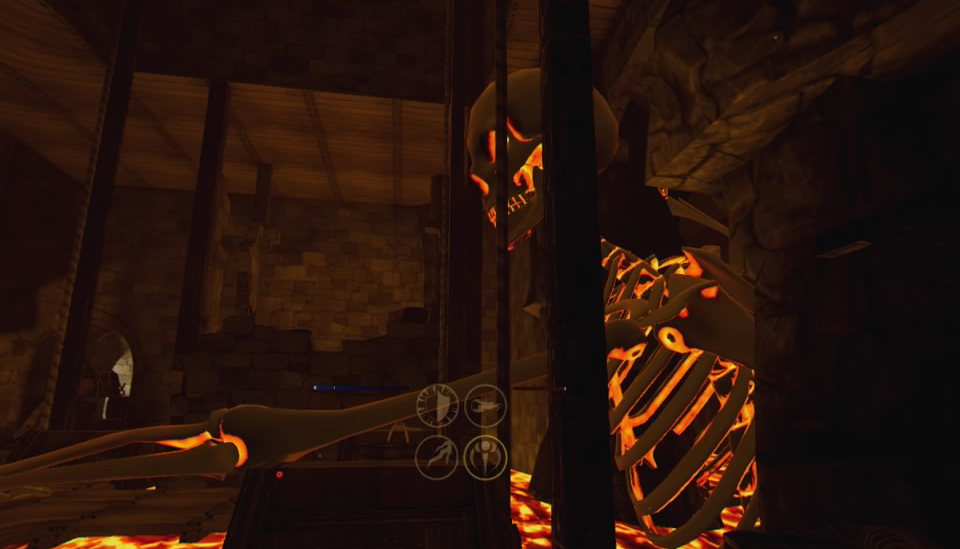 Some of the stage dynamics are impressive!

Wands looks pretty decent with some semi-realistic visuals spread our over a variety of stages including the interior of a temple, a train station, ruins and a bunch more that do a pretty solid job of mixing up not just the look of the game, but the gameplay as well.  Stages may consist of small platforms, small and large rooms, large foyers, exterior areas with each containing individual elements that accentuate each stages differences.  A huge skeleton may pop out of a large tunnel, trains may roll past you or a dangerous storm may roll in, forcing you to move your fight indoors.  You can choose from a bunch of avatars with most of them needing to be unlocked with the money you earn as you play.  Avatars are competently mapped and will move accordingly if the user moves in real life adding a nice little dodging mechanic to the game.  Every spell has unique effects from smaller spells like shields to summoned fiery phoenix’s, blasts of lightning, poisonous gases and many more and all look great.  The actual body motions are a little more awkward looking when playing against human players, but it’s not entirely unexpected given how motion mapping works when it comes to VR.

When you first enter the game you are treated to what feels like an overly lengthy tutorial from a recording of the magician’s assistant whose layer you find yourself in?? It’s not totally clear, or I missed the explanation but once the bodiless voice finishes his tour you are left to choose whatever you want to do.  All the sounds in this game match the action perfectly though and above anything else, I will say that the presentation here is spot on. 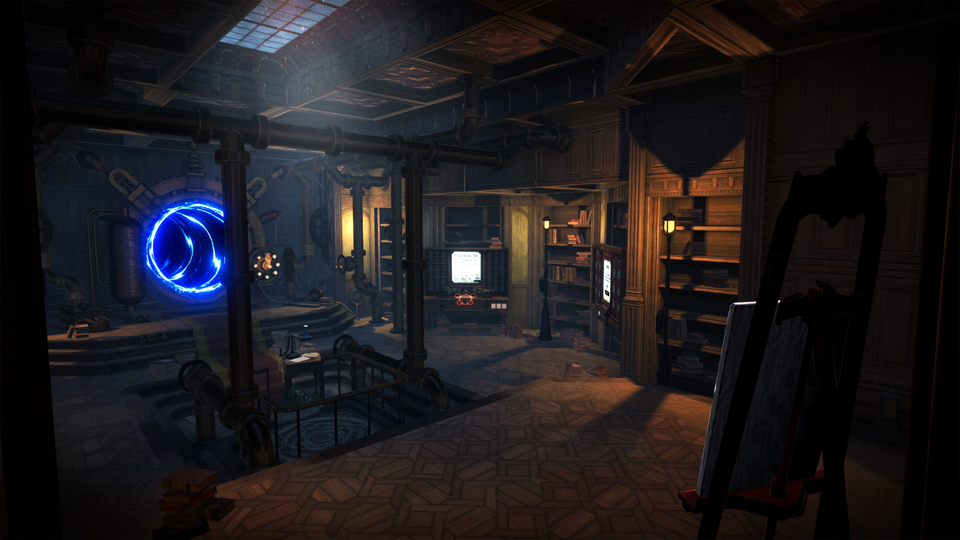 You’ll spend a bit of time in here unlocking all the spells, staves and avatars in the game.

So, Wands is sort of a mixed bag when it comes to exactly what this game is.  I played this on the Gear VR and I can’t lie when I say that I was impressed.  Wands embraced the shortcomings of the mobile headsets and delivered a competitive multiplayer experience akin to what we expect from more powerful headsets.  Unfortunately, since 2016 we have seen many multiplayer experiences that continue to raise the bar well past what Wands offers.  That’s not to say it’s a bad game and it most certainly is not, but the 1 vs 1 nature of the duels when combined with the restrictive nature of the movement system just left a lot to be desired.  That system I am bemoaning does have its advantages as Wands is cross compatible with every version of the game and because of that, whenever I searched for an online opponent, I found one.  In that regard, Wands impressed me as very few online multiplayer games have acquired or sustained a consistent player base.  I should say that while I do find the mechanics in here to be restrictive, they aren’t broken and as I played and got familiar with the maps, spells and mechanics I did start to enjoy myself.  There is a lot to like here once you get past the games lacking 1st impressions and I can’t deny just how refined what’s here is. 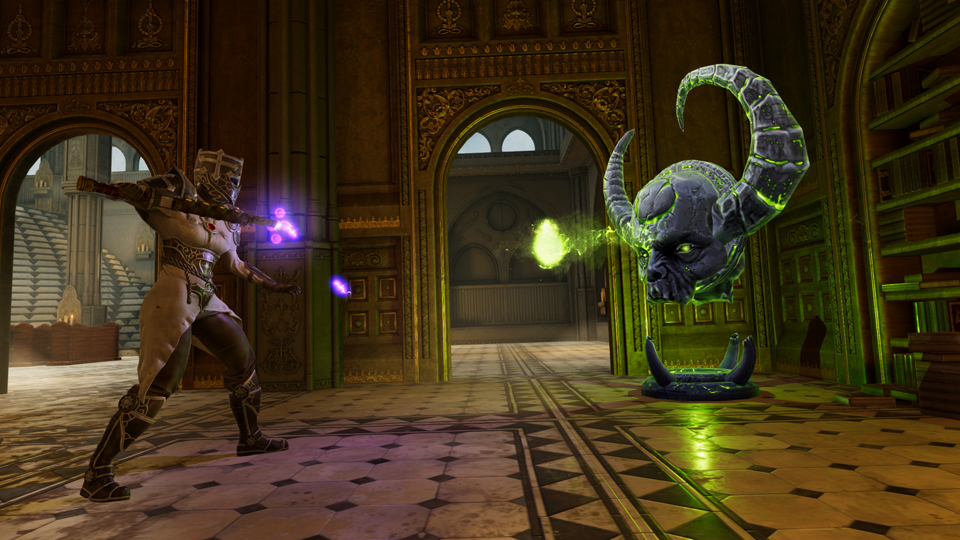 Choose your avatar and make your mage feel a little more like….you.

Wands is a solid 1st person action title highlighting the strengths and limitations of lesser-powered headsets and because of that, shows its age.  If you are playing this on the GEar VR or Go headsets then I’d expect you’ll be impressed but if you are playing on any headsets that fully tracks your movements in VR, the limitations of the combat system are quickly apparent.  The reward system is fair, the lobbies seem full and if the idea of a magical duel is appealing to you then Wands might just be worth your time, just temper your expectations.

What would I pay?  This $10 on the Go and Gear and twice that on the other headsets and I think, given what’s offered here $10 seems more appropriate.  The core value here lies in multiplayer duels and with not much else to offer besides that, $20 just seems to high.

Cortopia AB provided The VR Grid with press codes for this title and, regardless of this review, we thank them for that!