This review has been updated to reflect changes from a post-launch patch.

It’s absolutely nuts that we have not had a single, first-person fighting game for the PSVR.  The medium seems almost perfect to just pound some loser in the face and dance over his unconscious body.  Well, now we get our chance in Drunkn Bar Fight, but before you get to excited, this might not quite be the brawler you are looking for. 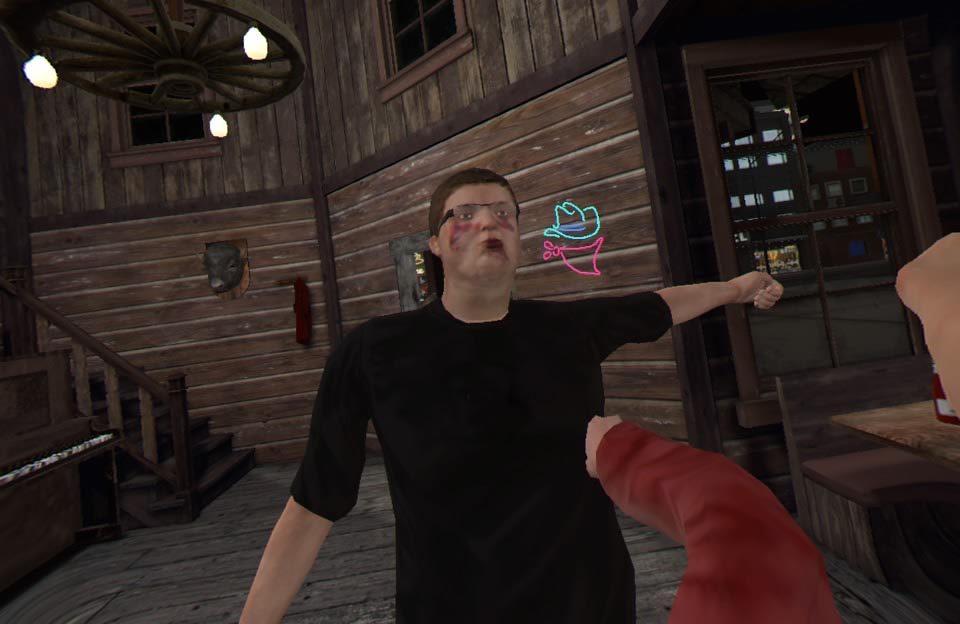 The premise of the game is simple, beat everyone up!  With your hands mapped to move controllers you can punch anyone to your hearts abandon.  Not good enough for you?  Grab almost anything around you, including the patrons themselves, and smash it or toss it at your adversaries.  While this sounds amazing on paper, the execution is much less so.  The emphasis here is not on realism, but rather on exploiting the rag doll physics, which makes for some hilarious, albeit shallow fighting action.  You can punch in almost any fashion, but be aware that the tracking and collision detection is all over the map.  Grabbing a nearby guitar and smashing it over some dude’s head is sooooo satisfying when everything acts like it should, but it rarely does.  Often times your arms may run into something, or the item you are carrying will, or the patrons.   Thankfully, a post launch patch fixed this issue somewhat by including smooth turning, allowing you to move around the rooms a little more freely and make it much easier to grab items all around you.  Something I did notice, which haven’t seen before in a game is that pushing the triangle button on one Move controller will turn you at a slow pace, but pushing triangle on both controllers doubles the turning speed, which I thought was a pretty clever little mechanic.

The game looks good, bad and ugly.  The 3 stages; a pub, a saloon and a balcony, all have some good aspects and terrible ones.  Backgrounds lack a tonne of detail, but don’t look awful.  Each stage is littered with items to use against your assailants.  You have a full body here so the animations on your arms can be hilariously off and this goes doubly so for the guys you are fighting.  While some models look good, others look like human versions of golem and or have huge or tiny heads.  I did like that the characters showed some decent damage on their faces and look pretty beat-up by the time the round is over.  Given the nature of the game, most of the rough art and animation is forgivable, but the doesn’t save it from looking cheap.

Audiowise, I was a little impressed.  There are some generic ‘bar’ sounds playing in the background but the audio effects are where this shines.  Punches and blocking all sound great and the comedy factor is ramped up when patrons get to close as bowling pins sound when there heads collide and heave blows sound very heavy.  Each bar has a juke box where you can select from a bunch of music to further help you get in the brawling mood. 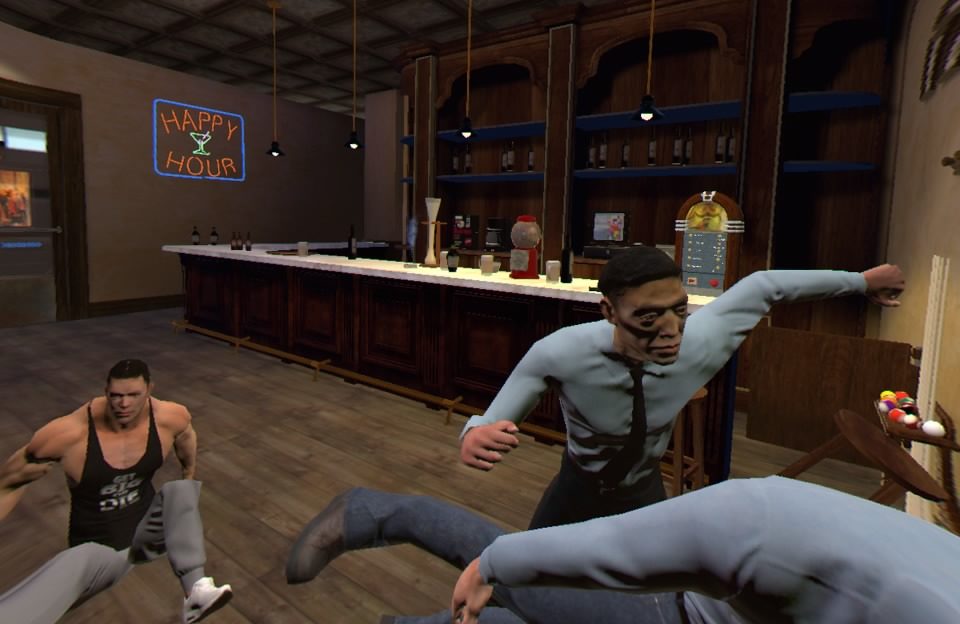 It may not be clear from the picture, but I’m knocking these 2 guys down with a 3rd guy in my hands!

Each bar has 7 stages offering up more challenge then the last, at least I think that’s the case.  Once you figure out what you need to do to win fights, the game actually gets really easy and it’s up to you to entertain yourself throughout your play.   You get scored on each stage and are told of moves you used during that last fight, but seeing as how you mostly just flail your fists, it’s difficult to tell what’s a move and what isn’t.

You can’t tell from any in-game option, but this does have local multiplayer up to 4 other players can grab a DS4 to take control of 1 of the patrons.  The controls here are crazy limited and the VR user has a huge advantage and can pummel opponents way faster than they can press button.  Still ,it’s a welcome option and does add a little to the fun factor.

Other than mixing up the environments and people, each stage plays the same with the latter ones in each bar offering woman to avoid aggravating lest they come after you.  Hitting a woman results in a chorus of boos and what I assume is a loss of points, though that is 100% conjecture on my part but given a sign out front of the bar has a no hitting women sign, I’m assuming I’m right.  You can’t actually get drunk here, just drink enough to vomit everywhere, which is funny one time.   You and the the other fighters can get stuck in the environment, though moving around in the real world seems to fix that for yourself.  The fighters still line up ‘in front’ of me which was dissapointing as I would have loved to be fighting guys all around me, swinging for the fences and trying to survive.  Sadly, this isn’t the case which makes this way to easy and almost impossible to lose at. 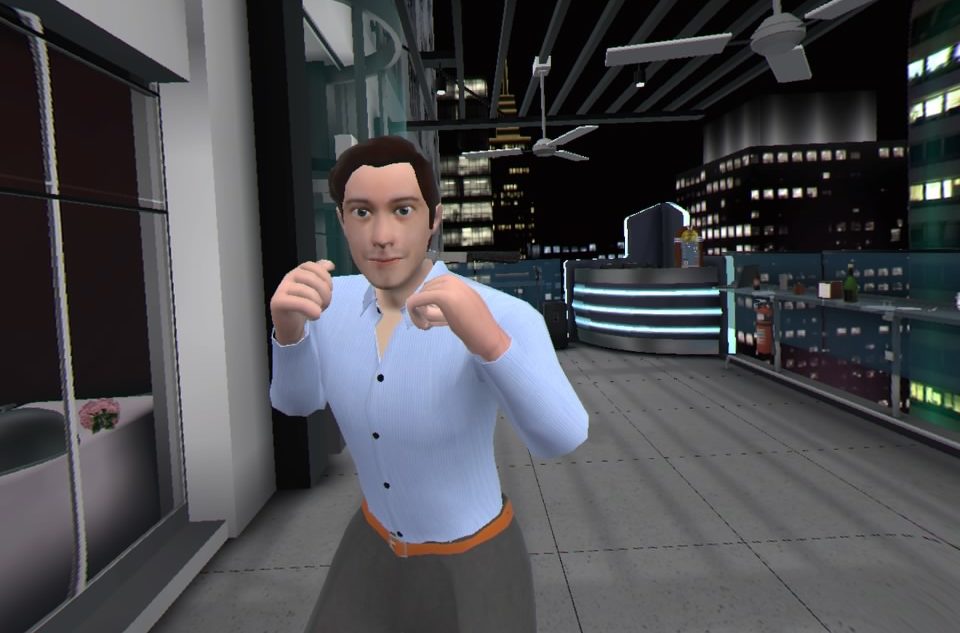 I stabbed this dude in the neck, but he seems to be taking it ok!

There is an undeniable comedy factor here, but joke is only funny for so long….roughly 10 minutes or so in fact.  I can’t say that I didn’t laugh during my time in Drunkn Bar Fight, I laughed a bunch of times and while this game may be of the budget variety, The Munky has seemingly embraced these shortcomings and built a game around them.  This isn’t going to be for everyone, but if you are in the mood for some ridiculous fighting and hilariously awful physics and collision detection, this may be for you and probably best played with some friends to share in on the whackiness

What would I pay?  $12 is too high for this. the games content can be breezed through in around 40 minutes or less which means the comedy factor is really the only reason to come back to this.  While it is fun to mess around for a few minutes, this ends up feeling more like a parody of a VR game than an actual one.  $6 is as high as I would go for this.

The Munky provided The VR Grid with a press code for this title and, regardless of this review, we thank them for that!