This review has been updated to reflect the PlayStation VR release of this title.

Lucky’s Tale, for those that don’t know, is this VR generations first 3rd person platformer, releasing at the Rift’s launch nearly 6 years ago and is now available on the Quest 2 & PSVR platforms.  You control Lucky as he navigates a variety of worlds in search of his piggy, stolen by a large tentacled creature called a Glorp. 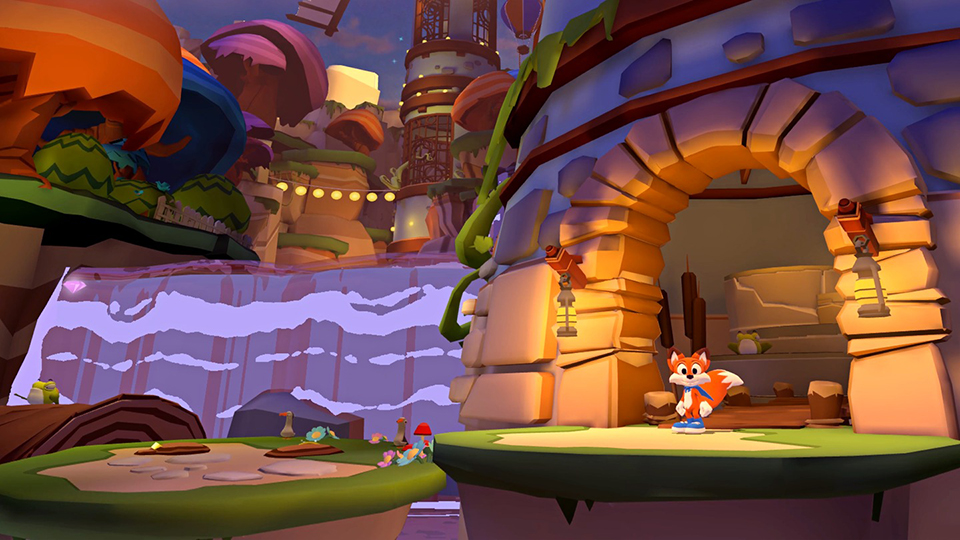 If you have played any 3D platformer EVER, you know how this will play with it’s gameplay hearkening back to the mid-90’s N64 esque titles like Banjo Kazooie or Mario 64.  On the Quest your Touch controllers will serve as gamepads and while they can be awkward at times, they get the job done with the PSVR version utilizing the DS4 which offers a more natural way feel for a platformer.  Lucky can do everything that Mario (and many others) can like double jumping, performing an air splash onto the ground below, climbing specific areas, tail spinning and even throwing some objects around the environment with that last mechanic having you physically look at where you want Lucky to throw something.  There are 16 stages to get through with the game getting slightly more challenging as you get through each stage though much of that challenge relies on moving fast and trying to get areas off the beaten path that may reward you with extra coins, points or lives.  Enemies come in a ton of forms from caterpillars, gophers, spiny fish, some kind of armadillo thing and host more, each with their own attack strategy though most can be dispatched by a swinging of your tail or by jumping on them.  Coins can be found in each stage with every 100 you collect rewarding you with an extra life while diamonds just boost your score for that run and a hidden present in each level unlocks statues to be viewed in between stages.  After a stage is complete you can revisit it playing in 2 extra modes: time trial & red coin hunt with the former tasking you with getting through the stage as fast as possible and the latter having Lucky hunt down 25 coins hidden in each stage.  The story is told through storybook text form at the beginning of a new world, though really just serves to carry Lucky to the next stage as it’s completely forgettable. 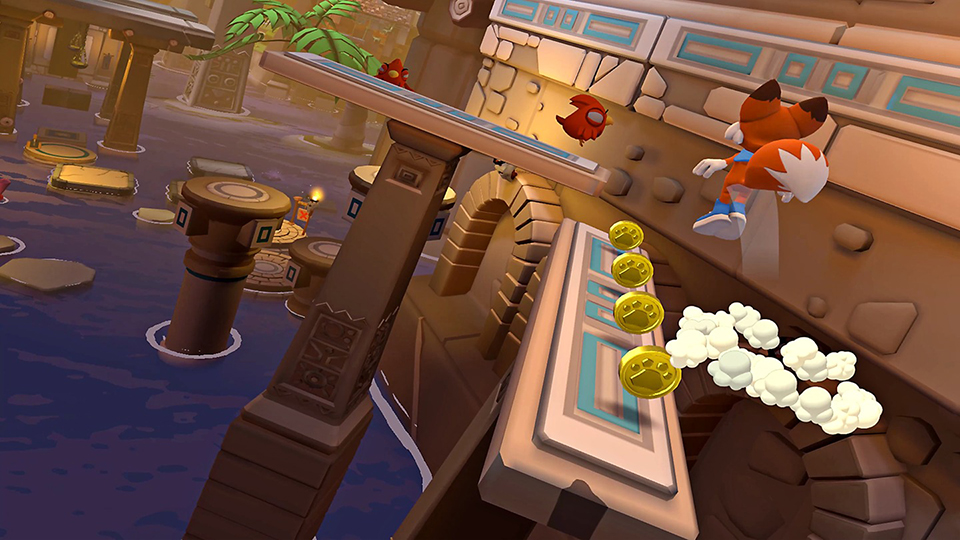 Plenty of platforms to jump across.

No matter which headset you play on, Lucky’s Tale looks good but does feel dated and I don’t mean 2016 dated…I’m thinking more like the early 2000’s era or so, but really cleaned up.  Lucky animates well enough as do the NPC’s with every stage containing it’s own theme from forested plateaus, underwater caverns, swamps and many more with hidden areas throughout that add a little character to each.  Texture details are light with much of the game’s environments looking a little simplified but fitting the overall style of the game as it does look very cartoonish.  Complementary to the art style is an “endless” draw distance that lets you see as far the edges of each stage which is awesome as you can look all around you to see where you can go and see coins and collectables that you have missed up to that point.  Some levels are relatively flat while others have Lucky climbing and descending cliffs and caverns making for a platformer that does an excellent job of keeping things feeling fresh.  Warp Tubes…erm, I mean tunnels take Lucky to some 2 1/2D Sidescrolling stages, typically offering up some extra loot and unique traps not seen during the levels.  Beyond the bad guys, you have Lucky bouncing off mushrooms or even the enemies themselves, scaling climbable walls or moving ever upwards on moving platforms, dodging spike laden logs and balls and avoiding a ton more obstacles to get to the balloon at the end of the stage.  Other than the fact that this does look a little ‘basic’ by today’s gaming standards, Lucky still delivers some solid presentation that pops in the headset and even includes updates to Lucky’s model, environmental lighting and rendering techniques not seen in the original release.

Sound design is nothing short of being on point and also contains some remixed audio though as a guy who never played the original, I can’t tell you what that means.  The soundtrack is pleasant and designed to fall into the background fitting seamlessly with that stages theme with enemies sounding exactly as you would expect for a 3D platformer with most foes eliciting a single sound as they try and take you out.  Lucky is a little more fleshed out, sounding like a young boy, exclaiming when he jumps or knocks out a foe and when left unattended will try and get your attention in his very jovial manor.  Bottom line here is the audio design is totally on point. 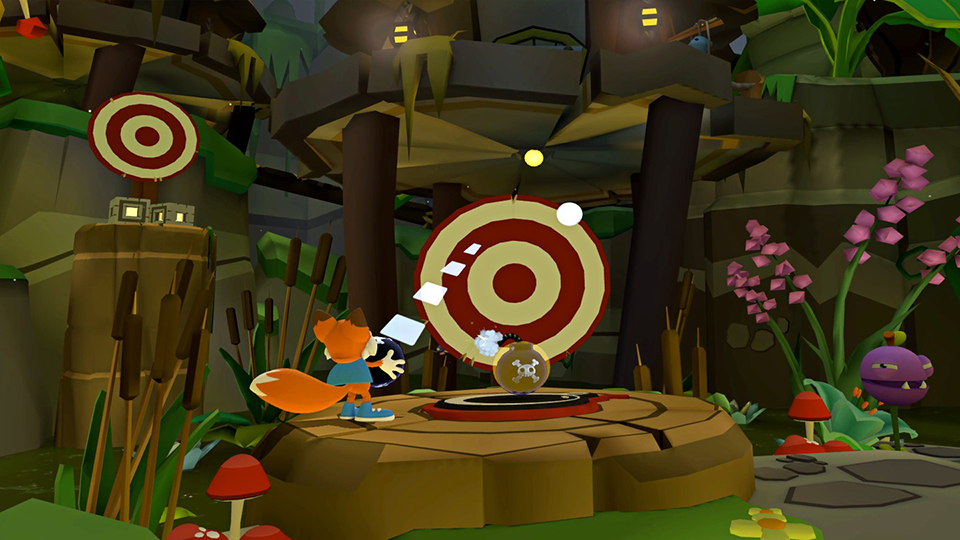 You’ll have to look at where you want Lucky to throw.

I can see why Lucky’s Tale was big deal 6 years ago as it was the 1st 3rd person title to grace our VR headsets though I don’t think time has been kind to the game as, while it still holds up, we have seen the genre grow in the last few years.  As Lucky moves through the environment, you (as the camera) automatically follow him, which is typical, but I found the camera placement to be too close to Lucky, forcing me to look and strain to see where he was going next, and I would love to see an option to move that camera back a bit.  Secondly would be said camera angles which can be awkward if Lucky is way below or above you as sometimes the camera wouldn’t follow or follow very slowly, causing missed jumps and deaths.  Games like Ven and Astrobot handle this much better (but not perfectly) though with Lucky’s Tale, it just feels a little rougher.  In no way are those weird angles game breaking, but when I missed a jump because Lucky was in a weird position, it was annoying.  On that note, Lucky’s Tale also doesn’t utilize VR enough as you are basically a camera with hands that can poke Lucky and not much else so the need to peer round corners to view hidden areas just isn’t there as you can just see them without issue nor do enemies or items fly toward you, feeling like a missed opportunity for a little more immersion.  In no way do any of these issues wreck the game, but they highlight how much has changed since this game originally launched, making Lucky’s Tale feel a little dated. 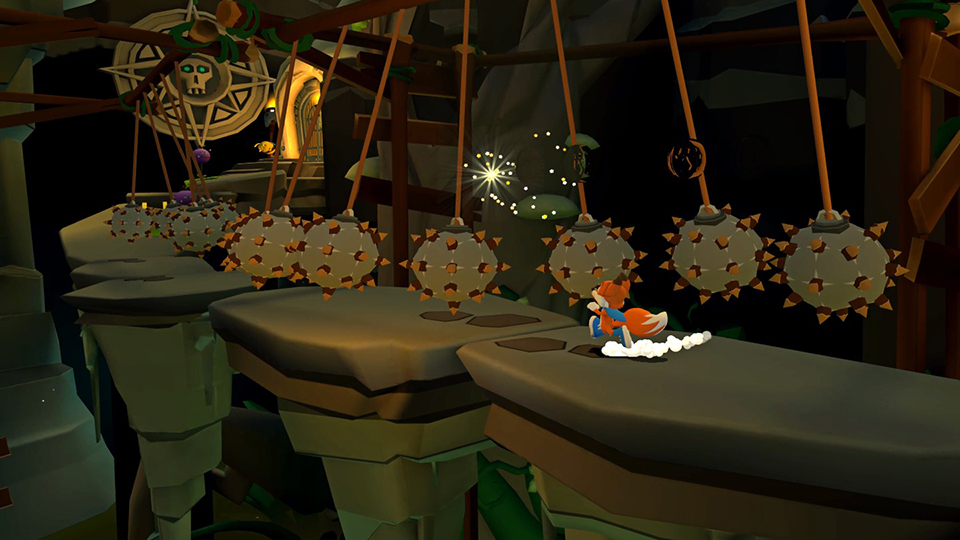 There are a few challenging spots in here

I like Lucky’s Tale for what it is, and fans of the genre should be happy as VR as a whole is really lacking in these 3rd person platforming titles.  It’s a serviceable platformer that feels ripped right from a bygone era giving me little feelings of nostalgia, but also reminding me how far things have come.  Beating the campaign will take only a few hours but going back and completing those challenge missions will add a couple more and while I may not have been blown away by this one, I can’t deny how refined of a platformer this is.

What would I pay?  This is $20US and that’s a fair price as it delivers on charm, polish, and content value.  Those who have played more recent platformers might be disappointed by how childish and dated this can feel at times, but it still holds up in 2021 and fans of the genre will eat this one up.

Playful provided The VR Grid with a press code for this title and regardless of this review, we thank them for that!