I’m not a golf guy.  The closest I’ve got to loving the sport is rooting for Happy Gilmore to succeed in a movie I knew he was destined to succeed in.   With that said, it is shocking that it has taken almost 3 YEARS for us PSVR users to FINALLY get a true-to-life golf game.  In fact, the closest we got was a small mini game in Carnival games which gave us the smallest taste of the glories of golfing in VR.  Well now we have a golf game for…not you, not me, but for EVERYBODY that aims to deliver a true to life simulation of a sport many of us love and many more of us have been looking forward to trying in virtual reality. 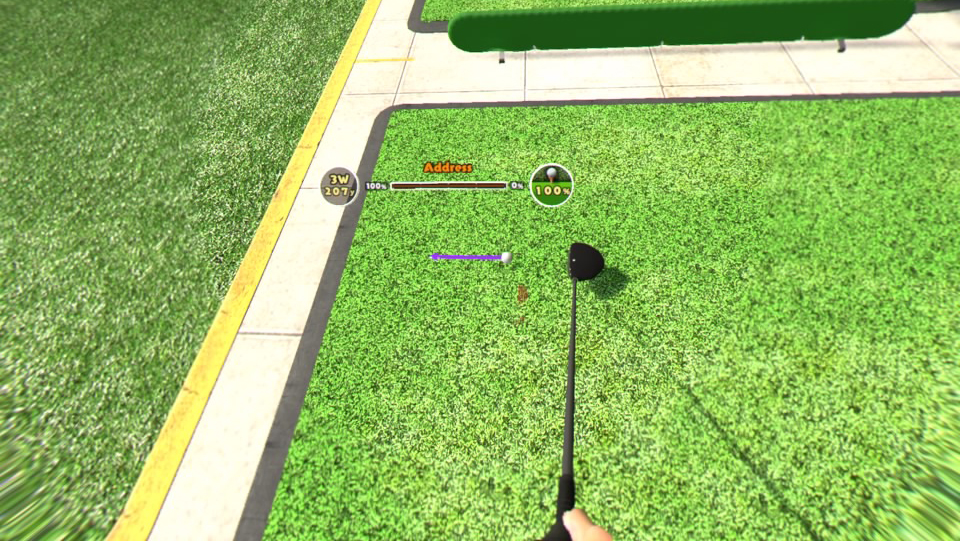 Unsurprisingly, you only need 1 Move controller here as that controller will act as your club, though the DS4 controller is supported but does hamper the immersion.  The Move plays exactly like you would expect with the DS4 acting the exact same with your club being mapped to the controller’s position making it just feel awkward.  If you have the choice use the Move and if you only have a Ds4 and want to play golf…buy a Move controller. There are 3 courses available and a driving range to really get comfortable before you tackle one of the 18- hole courses.  For myself, the game did a great job at calibrating height and proper distance from the ball, though I did find myself adjusting my physical position a bit, which is exactly what you would do in the real world, so I had zero issues there.   You can cycle through a variety of clubs though the game automatically picks what it suggests as the ideal ball whacker for your current situation (rough, sand, fairway or the green) though given my limited knowledge of the sport, I stuck with the game’s defaults without any issue.  From here you can just hit the ball or adjust some options like the angle at which you are standing or choice of club.  At the games onset you customize your sex, height and hand position and should you decide any of the options chosen are not too your liking, you can switch em’ up at any time.  The driving range offers you a variety of shot types from ground to upper level drives, as well as putting and shooting from the rough and allows you to move the ball to whatever position you like and practice to your heart’s content.  Once you feel comfortable you can dive into 1 of the 3 courses, provided you have unlocked them,  and see just how good your skills are. 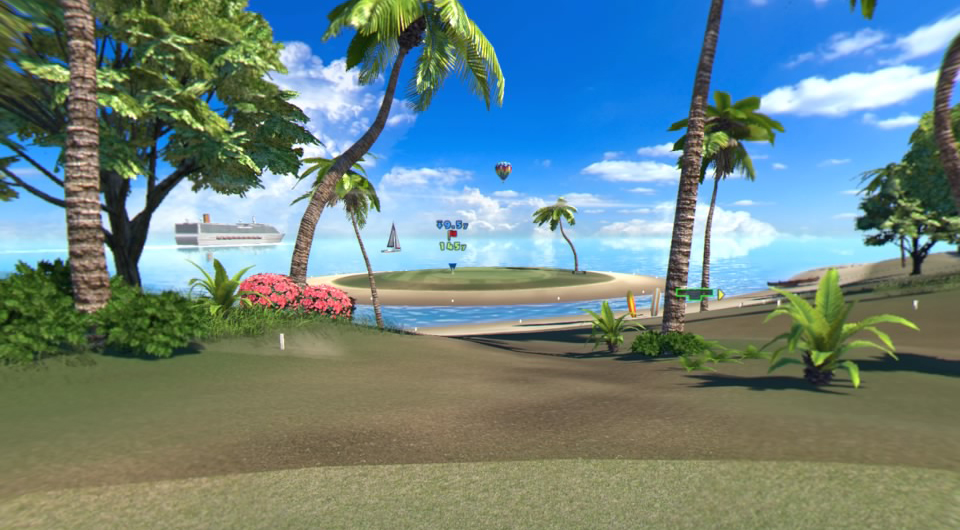 Everybody’s Golf looks solid, offering top quality and crystal-clear visuals that should make everyone happy.  The courses offer a variety of settings from beach areas, cliff sides and of course classic golfing greens surrounded by trees.  The few character models you see look great with the option to pick from a few different caddies to accompany you during the game.  Wind effects are at play as well and you can test that with a press of a button which will show your virtual hand drop some picked grass to give you a rough idea on how it will affect your balls path.  During putting sessions, you can bring up a grid to help guide your shot with the options for an aerial view of the course as well.  Ambient effects like birds flying around or trees blowing in the wind look fantastic with the overall visual presentation being top quality.  One issue of note would be the use of foveated rendering in the game which is really noticeable with the focal center and outer edges having a very visible line where the graphics go from being focused to a bit blurry and I did notice it throughout my play. 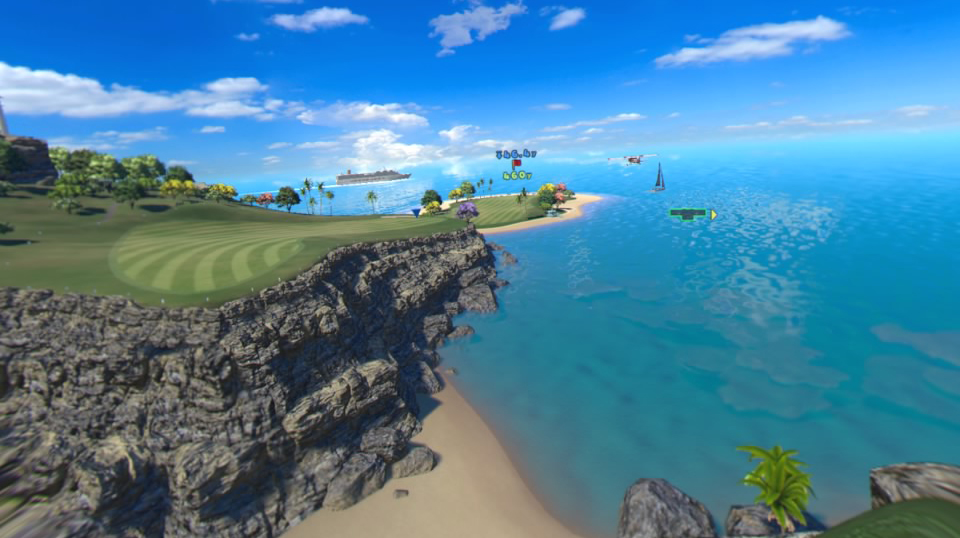 Some of the courses are truly gorgeous!

Sound design is equally on point, though does right by not really getting anything wrong.  The music played is friendly and harmless, immediately pushing itself into the background as unnoticeable, but I liked it over playing in silence.  You caddie may offer tips to help you which is fine and the voice work is solid, though as this was originally developed in Japan, the voices don’t always match the mouths on the models.  The caddies do repeat themselves fairly often offering the same advice over and over, and an option to turn them off feels missed as they will actually talk during your shots.  The ‘THWACK’ of your club connecting with the ball is satisfying and sound very real, as does any of the other effects like playing from the rough or sand traps adding a level of authenticity that I greatly appreciated.

Like any golf game, you can keep track of your best score on each course thanks to local leaderboards which brings me to my biggest issue with the game…NO MULTIPLAYER!!!  It baffles me how this was overlooked as the multiplayer design hasn’t changed in golf games since they have existed.  The lack of multiplayer, given that all would be needed would be in-game voice chat and a spectator camera while another player took his turn is to me, inconceivable.  Because of this oversight, I can’t help but think that a ton of value just feels missing from this title.  That’s not to say it’s worthless, far from it as golfing though the 54 holes available was a ton of fun, but without the challenge of playing against friends, I just don’t see myself returning to the game after I play though all of the available content.   It’s worth noting as well that you can unlock mirror mode for the courses, effectively doubling the amount of holes you can play.  My 2nd item to bring up would be the scaling Everybody’s Golf applies to the clubs and swings.  Whether you are Golfing veteran or a newbie to the sport, the physics system is set up to accommodate everybody, which I initially took offense too, but realized that it does allow for anybody to pick this up and play without feeling like a total loser.  The lack of competitive multiplayer makes this moot, but for those who are applying their real world skills to the game, they may be a little disappointed to realize the anyone can swing a Move controller 1-handed and potentially launch a ball with just as much accuracy and speed as someone playing like they mean it.  My last bone of contention would be that a bulk of the games content is limited when you start and you must play through 3 random holes to unlock more modes, clubs, caddies and courses which just seemed a tad uneccessary.  At the very least the courses should have been available without needing to play through smaller randomized sections for essentially no reason except to unlock them. 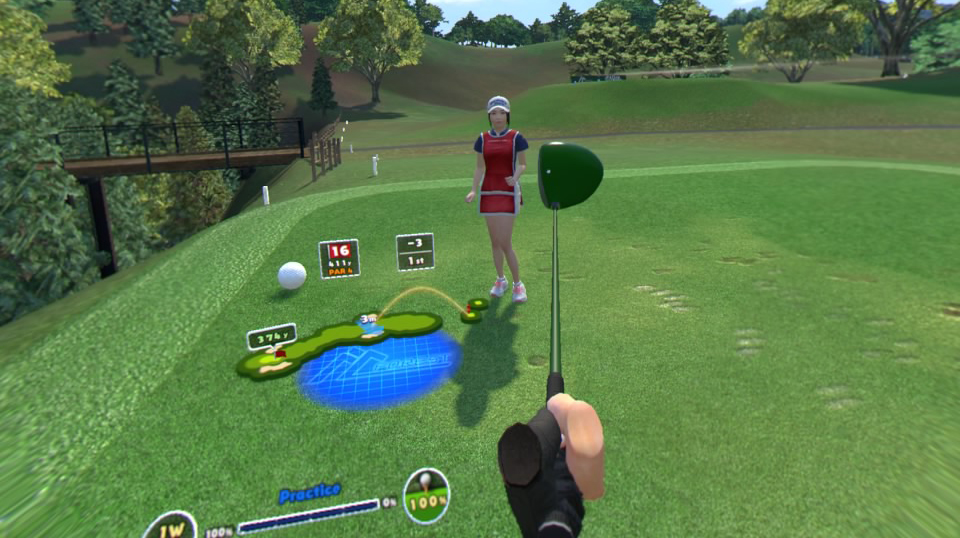 No matter which caddie you choose, they will all annoy you.

At the end of the day, Everybody’s Golf does what it needs to do to make it a success, but it’s not perfect by any stretch.  The presentation more then does the job and the accommodating physics allow anyone to give it a go.  The lack of multiplayer or even to play against AI is notable, but not a deal breaker as it’s still a ton of fun to swing a club in VR.  As forgiving as the physics can be at times, it still felt great to nail a long distance putt or smash a perfectly straight drive and for those reasons alone, I say this is still a winner!

What would I pay? $30 is worth it provided you have been looking forward to golfing in VR as we have had nothing up to this point to fill that niche and this works well.  For those who want a little more then a single player only experience, you’ll be left wanting but even still, there is nothing else like this for the PSVR, and it’s a great game to share with others and is another show piece for the headset.