Boxed In makes its way to the PSVR headset after being out for some time on the PC side of things and takes the traditional ‘match 3’ type game made extremely popular on mobile devices and places you ‘in the game’.   Now you need to blast or create blocks of specific color to create chains of 3 or more same-colored cubes, causing them to disappear as more appear behind them all in an effort to climb the leaderboards. 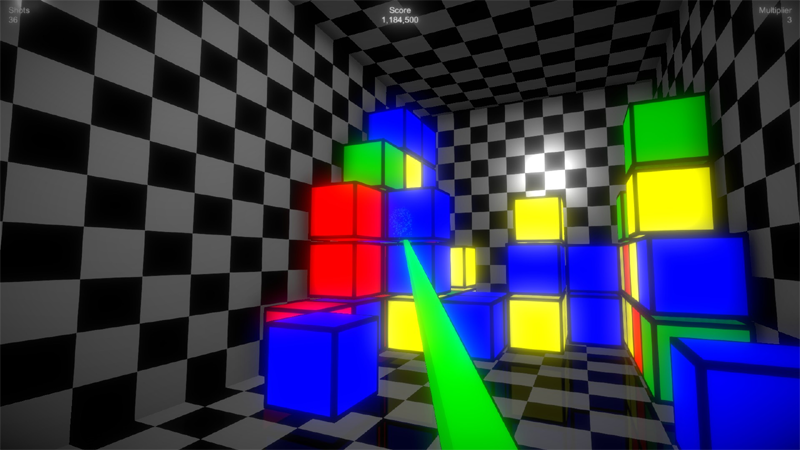 Looks simple until you realize THEY JUST KEEP COMING!

Armed with a Ds4 or Aim, this plays like a traditional VR shooter as you are equipped with a gun and must change the color of the blocks by shooting them, which will change the blocks to the color of the laser coming out of your weapon, which will cycle randomly as you shoot.  Using the Moves however gives you 2 guns, one for teleportation and movement with the other being dedicated to block manipulation.  Instead of changing the color of a cube, you can create a block by pointing at one of the cubes faces pressing the ‘X’ button allowing you create in an attempt to destroy.  Should you be feeling particularly adventurous, you can choose which direction the blocks come at you, either from side, above or below or you can remove the stress of encroaching doom by playing in ‘Solitaire’ mode which places you in a room where the blocks are stationary, and you can try and remove them using the least number of moves.  Multiple locomotion options are available for all 3 control methods with the default being click and teleport only, which I found to be rather cumbersome when compared to the smooth locomotion options.  Should matching 3 colors and 3 blocks just be way to easy for you, you can add a 4th or even 5th color into the mix and change from matching 3 in a row to 4 in a square, which dramatically increases the difficulty.  Of course, online leaderboards are present so you can see where your skills stack up compared to the rest of the world or just your friends. 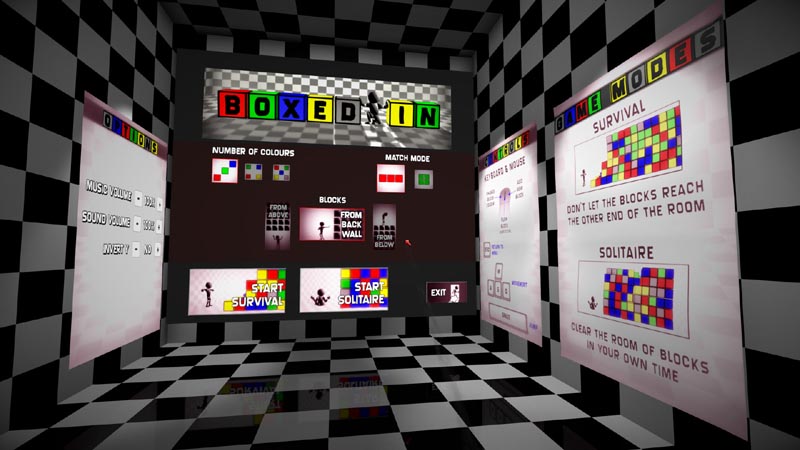 There are plenty of gameplay options to choose from!

So, there isn’t too much to talk about in regard to the visuals outside of the fact that they work for what’s here.  You are in a black and white checkered room with the brightly coloured shapes coming at you from whatever wall you chose.  The floor of the room has a nice reflective surface and there isn’t too much else going on.  Your gun looks like a child’s toy and does little to impress but gets the job done with the best aspect of the game being the approaching cubes.  As they get closer the pressure only intensifies and that claustrophobic feeling as your space dwindles only gets worse which is made even more dramatic when the shapes are coming from above or when you are riding the boxes as they rise slowly from the ground.    Matching the intensity of the slowly approaching wall is some suspenseful very retro midi style music that perfectly matches the action.  Your gun makes little beeps and boops when you change a blocks colors or create new one and when destroyed, more beeps and boops follow.  Presentation-wise, Blocked In is not going to blow anyone’s minds, but what is here is really all that’s needed to get the job done.

Boxed in works plain and simple and while it’s not shooting for the stars, what’s here gives a unique take on classic non-VR puzzle types.  This is basically like being IN a Tetris inspired game and for those that lamented the lack of immersion in Tetris Effect, you may find more of that here.  With that said, unless you are into score chasing, I think most will get bored or frustrated rather quickly.  Even a few solid tries will take upwards of an hour or so and the variety in the modes should give those looking for more challenge plenty to chew on.  Each mode is assigned its own leaderboard, so you know that the guys and gals ahead of you in points did so on an ALMOST even playing field.  I say almost as while the DS4 and Aim control identically, breaking up the controls on to 2 Moves provides its own learning curve as I was constantly fumbling over which buttons do what and while the scheme for these is simple, in execution I found them to be quite cumbersome.  That’s more a ‘too each their own’ type issue but I wouldn’t mind seeing some custom button options as even the defaults on the other controls could have better assignment. 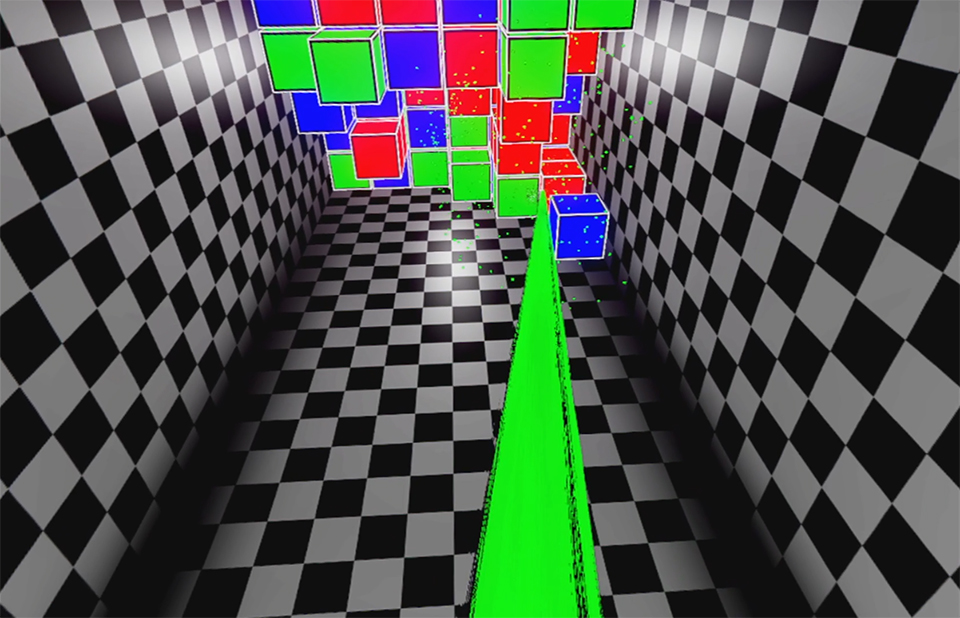 When the blocks come from up high, it feels like there’s more pressure!

Boxed In will appeal to fans of games like Tetris or Bejewelled and if you dislike those types of games than this probably isn’t for you.  If you are into those games than combining them into a 1st person VR experience is a winning formula.  It’s simple but effective and I had a lot more fun with this than I expected too.

What would I pay?  This is a whopping $6 US and for that price, if you have any interest than I say pick this up!

Red Chain Games provided The VR Grid with a press code for this game and, regardless of this review, we thank them for that!