At this point, it’s fairly well established just how ridiculous the Sharknado movie franchise is, so of course we get a game tie in, or more importantly a VR video game tie-in which aims to capitalize on the shark infested insanity.  Eye of the Storm is a wave shooter that places you dead center in the Sharknado and it’s up to you to take out wave after wave of sharks as they fly out of the sky toward you. 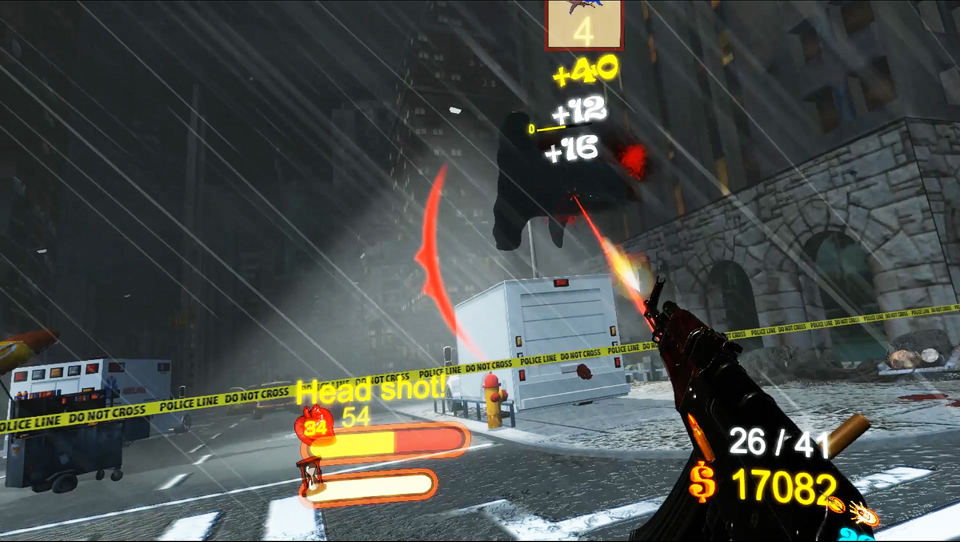 Like almost every other wave shooter out there, you are going to need a couple of tracked motion controllers though all of your weapons will only be held in a single hand with a few other menu options tied to both controllers.  You are in a variety of locales with lightning indicating which direction the next wave will come from.  You initially are only armed with a pistol though as you progress through the campaign, more weapons become available.  The first, most annoying gameplay aspect is that your ammo is on demand, meaning you don’t get a new clip until you have nearly exhausted your current supply.  Once you get low, you need to look around the small area you were in and walk over to it.  This isn’t a stationary wave shooter with the area you are in allowing for some small movement, mostly needed to dodge the incoming flying fish.  Every time you kill a shark, your slow-motion meter fills up, which can be used at any time during a level, depleting it.   You can also jump insanely high and try to avoid the sharks flying toward you with the goal of each stage to kill a certain number of sharks, so you can get sucked up into the storm and dropped off at the next stage.

To say Sharknado doesn’t look good would be an understatement, which I expected given the source material.  That said…it doesn’t look good.  The opening scene puts you in a bar just before the storm with some patrons scattered around as a news broadcast about your impending doom plays on a TV.  The models used are stiff and look terrible though the sharks do look better as they tear the bar up.  The game is broken up into a series of stages, apparently taken from the movies (I’ve only seen the 1st one) that place you in a small area with debris blocking you from leaving your little playable square.  When the lightning strikes, that indicates which direction the next wave is coming from and the chaos ensues.  While the game doesn’t look good, there are still some cool moments when the sharks are flying toward you, and they actually look fairly decent at times.  The surrounding Sharknado looks alright and a few comedic moments pop up in the game that are fairly amusing like a flying cow or a dude trapped in a portable bathroom. 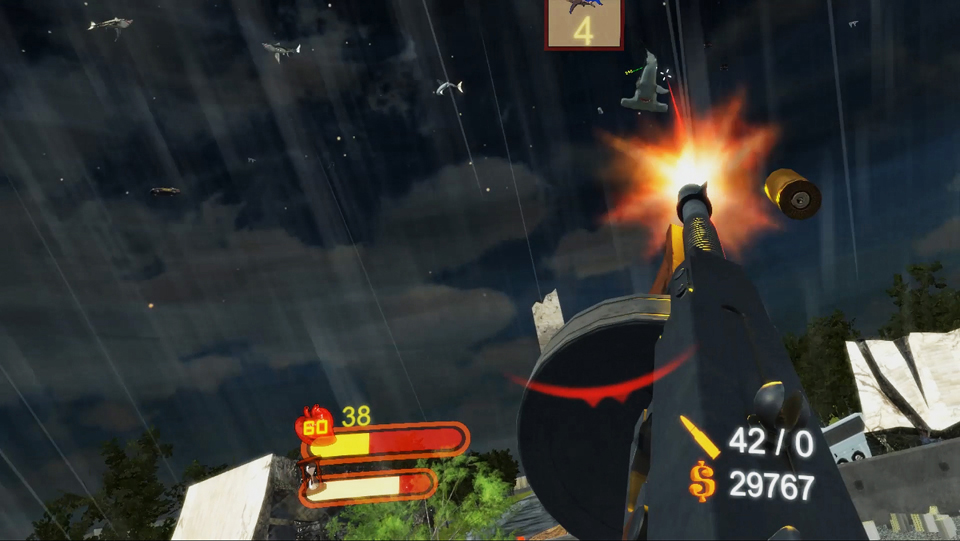 The audio effects are decent enough, though after the opening scene, it’s mostly just stormy sounds or the occasional person (or people) that pop up throughout a stage.  Weapons sound alright with a couple musical tracks playing throughout the 90 minute (ish) campaign and overall, the audio works.

Besides this being yet another wave shooter, I did appreciate the free movement offered as well as the ridiculous jumps and slo-mo mode.  That said, there are a host of issues that plague the experience, the first being performance ,which stuttered constantly throughout my game, making it borderline unplayable at times.  This stuttering seemed to get worse the longer I played and on numerous occasions the game would crash or lock up on a loading screen, forcing a restart or back to back restarts.  I also took offense to the on-demand ammo, and while you do pick up an infinite ammo power-up early on for some weapons, it’s still felt completely unnecessary to have to look for a new clip every time I exhausted one and health is also replenished this way when your health gets low enough.  While the sharks come from the storm from all sides, they seem to be either magnetically attracted to you so no matter what they bounce off of or hit, way more often then not, they unfairly change direction and fly toward you OR they fly overhead to fast to hit, forcing you to just sit and wait for one to drop in your lap, which could take minutes.  The former wouldn’t be so bad except that some sharks can take a lot of damage, perhaps more then your remaining clip has, but not enough to respawn the next clip, meaning when you get low in ammo, you’ll have to empty your rounds just to replenish you ammo so you can actually kill a shark.  Slow Motion isn’t just a nice little bonus, but a much-needed game mechanic to progress.  The sharks can come at you so fast it can be near impossible to kill them before they fly past you and disappear so slow motion works great, but if you don’t have any slo-mo left, you need kill sharks to get it, which you can’t really do unless you luck out and kill one that’s already been damaged or find one that’s hung up on the environment, and you need to be quick in killing those guys as they will disappear mere seconds after getting stuck.  All in all, if it’s not unplayable due to the dropped frame rate then you are left with a game with some busted mechanics. 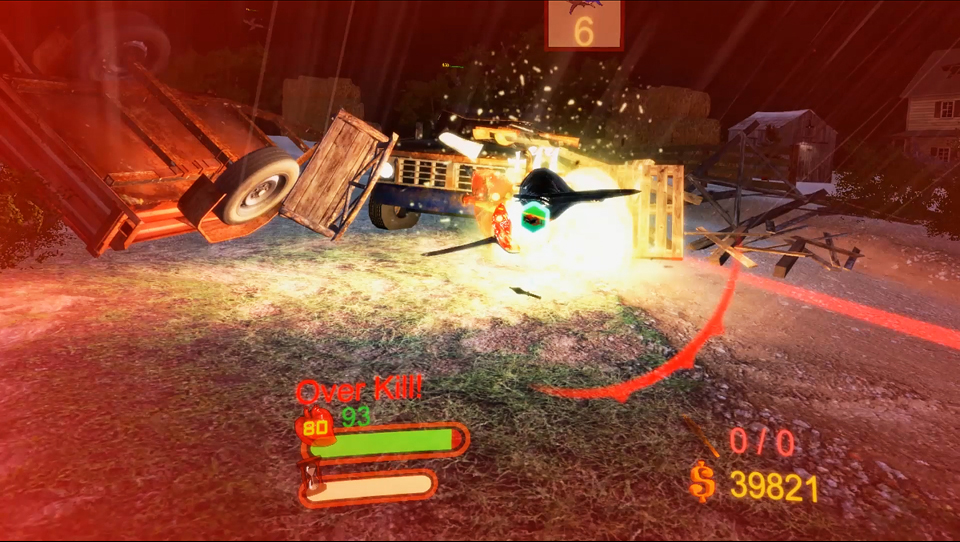 The rocket launcher makes quick work of any shark, just don’t get to close

Sharknado in VR is just as messy and ridiculous as the movies but is to simplistic and broken to really offer that much fun.  It has its moments and maybe on a better PC rig this may run smoother, but it doesn’t really seem like there is enough going on here to make mine struggle like I did, and I meet the recommended specs.  Even ignoring the performance issues, while it is initially amusing to have Sharks flying in your face as you try and blast them out of the air, the novelty quickly wears off, leaving us with just another wave shooter.

What would I pay?  I have no idea…$5 I guess, and that’s assuming the performance issues get fixed.  The action doesn’t change from the first stage to last except for new weapons, with the game culminating in boss battle that takes too long.  If you have special affinity for the Sharknado movies, then sure, give this a go if it goes on sale but for everyone else, this is a tough sell.

Melcher Media provided a code for this title and, regardless of this review, we thank them for that!