Primordian is a First-person action adventure that takes place on a vibrant planet full of gargantuan creatures.  These are the last days of the first planet from which all other planets came from and due to the planets rotation, one side is bathed in light, the other in darkness and every few thousand years, the light side is in eclipse thanks to a small moon and it’s in that time when the game takes place.  You play as a lone dark-sider tasked with taking out the light and leading your people to salvation.  It’s a great premise and an interesting world but beneath this flashy exterior is a relatively shallow experience. 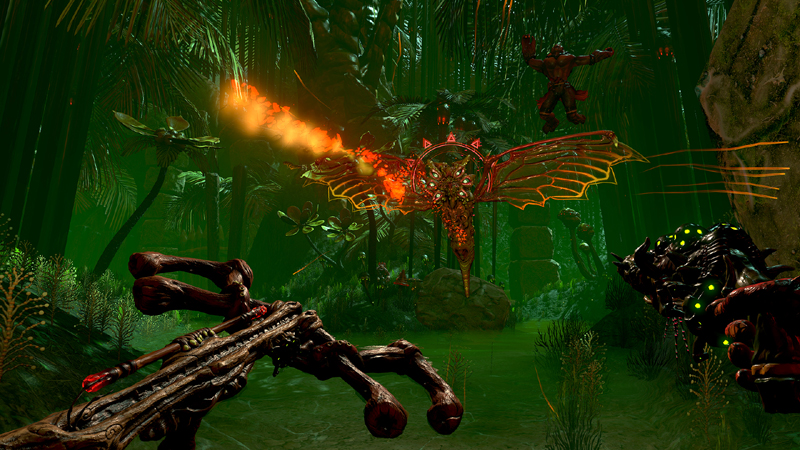 Let’s get graphics out of the way first: the game looks great, with deep colors making the alien world feel exotic and real. Without spoiling anything, there were several instances I found myself a little startled at how BIG the flora and fauna were, and that couldn’t have happened with an ugly looking game. There are truly amazing visuals at play and this is one of the better-looking VR FPS’s available today.  The audio is solid too, the world feels inhabited and alive, and the fights are scored well. 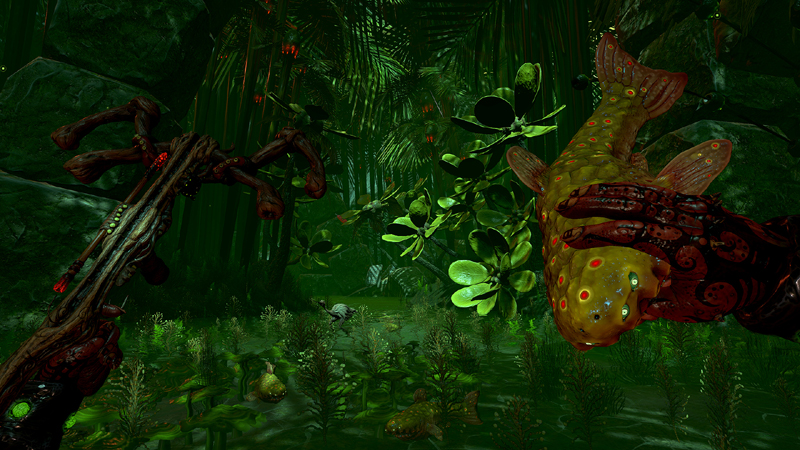 It tastes better then it looks.

Primordian is a game where you go from point A to point B, with smooth locomotion the only movement option currently available, while killing some things. Frankly, the fights are tense, but not nearly as good as the could be, because it feels like you are fighting against a ghost. You wave your arms around violently, but enemies do not respond to your hits, and the first enemy I fought took long enough to kill that I was worried my hits were not connecting with him. This game NEEDS to implement more feedback from enemies. I’d like to see a large health bar or visual signs (other than decapitation) that I’m damaging my enemy, and I’d like them to either make a noise or flinch or something when I hit them. Some controller feedback would be awesome as well. The majority of the game is combat and the lack of feedback from the enemies really hurts what should be a visceral game.

There are a few bugs I encountered in my playthrough as well. A few enemies popped in out of thin air, and I noticed a few environmental objects clipping through other objects. Noting game breaking, but the VR crowd is more picky about these things than the average gamer, so special care should be taken here.  It’s also worth mentioning that the game as it currently stands will only last 2 hours or so and while the devs have stated more chapters are coming,right now it does feel on lighter side in regards to content. 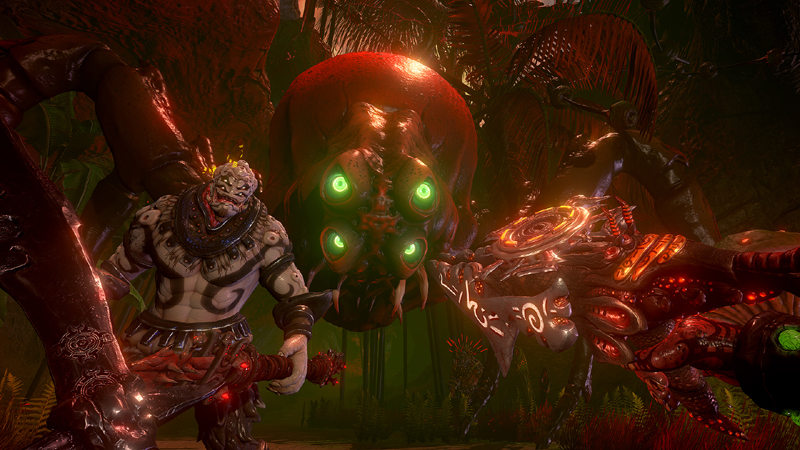 Very few things in this game are friendly

With so many other similar titles out there that allow you to roam more freely and include more complex fighting mechanics, it is hard to recommend Primordian currently.  It looks amazing but is incredibly linear, doesn’t feel massive, and implements a very bare bones combat system.  As a person who is excited about VR (I honestly can find enjoyment in every VR game) and as someone who really wants to root for the indie devs, it pains me to give this a low score, but I have to. I truly dug the old school science fiction/fantasy pulp feel the game gave me, but once you look past the visuals, there isn’t a lot here that held my interest for very long.

What would I pay? I would pay maybe $7 for this experience, the full price just feels inflated. It’s neat, but doesn’t offer anything other than atmosphere, and weak combat.  The devs have been adding content, so with more added content you may be able to forgive some of the flaws for the chance to be in an interesting world.

Stonepunk Games provided The VR Grid with a review code for this title and, regardless of this review, we thank them for that!