This is Espire 2. Like its predecessor, Espire 1: VR Operative, that came out back in 2019, Espire 2 looks to once again be the Metal Gear Solid for VR that everyone hoped the first title would be. Spoiler alert….the first title fell quite short of those lofty goals, but I jumped into Espire 2 excited to see if lessons learned (and a focused release on only the Quest platform) would make Espire 2 the game we all hoped the first would be. 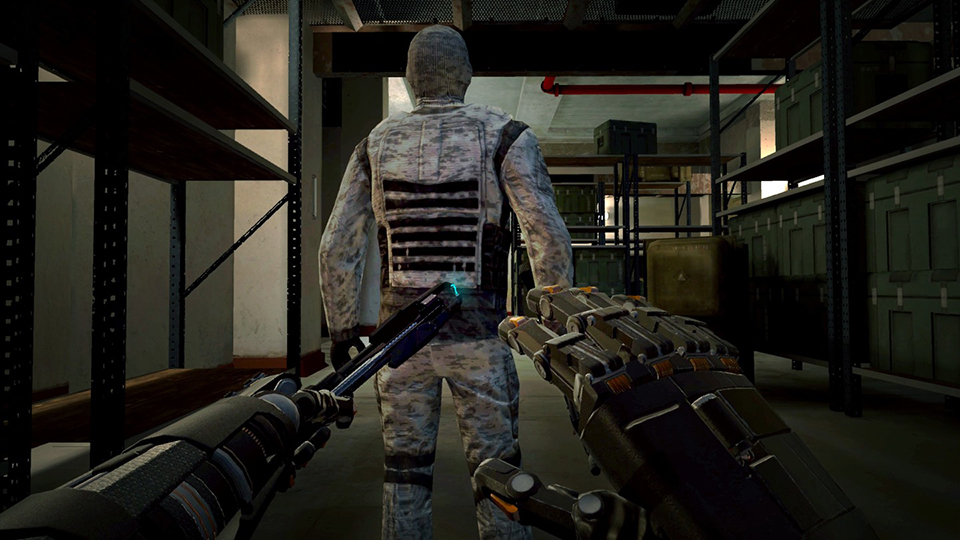 Picking up after the first game, the year is 2036. You once again take on the role of POE. You are essentially a pilot sitting in your comfy office navigating a droid and, after the events of the first game, POE is thrust back into the world of dark espionage as the centerpiece of the Espire project. Now with the help of two droids called “Frames” and an all-new arsenal of weapons and tools, POE must embark on a mission to eliminate the global threat imposed by the deadly terrorist organization, OPHIS. Now, do you need to go back and play the first game in order for the story to make sense? The answer is no, the second game fills you in on what you need to know (honestly it didn’t matter much to start with and it doesn’t matter too much now either). It’s all very paint-by-numbers, video gaming narrative stuff to get you into the game and sneaking by bad guys, which brings us to gameplay.

Espire 1 was very much a stealth game, and very much wanted to position itself as a Metal Gear Solid experience in VR. Unfortunately, it fell flat on many fronts, most prominent of which was the enemy A.I. (or more specifically the lack thereof). Similar to its predecessor, Espire 2 also goes for Stealth as a main gameplay mechanic, greatly encouraging players to navigate missions without raising alarms, while also often offering a run in gun approach as a perfectly acceptable means of completing mission objectives. Throughout its 6-8 hour campaign, Espire 2 offers players many sandbox moments where the way in which you get from one objective to the next is left very much up to your desired play style. Truthfully, as long as you play Espire 2 like a stealth game where being detected is not an option, it does a much better job than the first game in pretending to be a competent action stealth espionage type game.

Unfortunately, the enemy A.I., while slightly improved from the first title, is still half-blind and mostly deaf to their surroundings. This makes running around them, past them and through them often easier than a stealth approach. Unfortunately, this also hinders much of the game’s fun factor. Opting to go in loud, guns blazing, is all too easy as the game gives players enough ammo to simply mow down enemies standing around unaware or running in conga lines in the open. 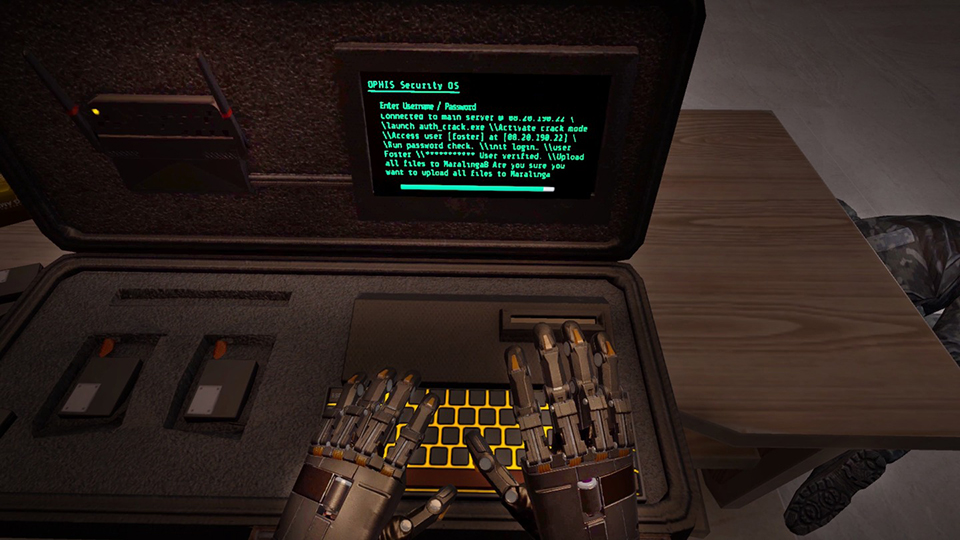 There’s a lot of espionage happening in here.

Combat fun is again hampered by unsatisfying gunplay. Pistol, particularly those with silencers, did play well in the game given the stealth intention of missions and the “pop” of the silenced bullet.. Unfortunately, every other weapon ranging from SMGs, rifles, to shotguns felt lifeless and very static, coming off more like shooting airsoft guns than high powered weaponry. This lack of oomph neutered the gunplay experience entirely. This point is doubled down on by the complete lack of blood, gore or any real sense of realistic impact to enemies.

Now I must reiterate, when I played the game the way it was likely meant to be played- silently moving around in the rafters, hiding in closets and tranquilizing or sniping enemies strategically- I could see the game that digital load was trying to make and it’s frustrating, because outside of the game’s A.I. and combat balancing issues there is a lot to like. Freedom of movement like in the first game is a high point here as players are given so many movement options in their droid bodies (aka “Frames). Running, crawling and climbing all around the maps is encouraged, and really reinforced the whole playground of combat mechanics the game is built around. Building on the movement mechanics of the first title, players are now given the option of two different Frames, Sinder and Sooty. Sinder is essentially your Frame from the first title, with Sooty being a much smaller droid that is capable of fitting in tighter spaces and comes equipped with sound distracting devices. In a nicely unique VR twist, Sooty can actually project your own voice to unsuspecting enemies. Speaking of which (pun intended), Espire 2 now also allows players to sneak up on enemies and speak some pre-assigned phrases into the headsets microphone, like “drop your weapon!”, or “lay down on the floor!”. It’s a neat idea.

Some frustrations around getting on top of surfaces aside, moving around the game world feels much more polished here than in the first title. This is due largely in part to a much more streamlined utilization of the hacking tool and tranquilizer gadgets (now both built into your suit and requiring much less playing around and switching of hands than in Espire 1), weapons, and holsters to accomplish basic tasks. Accidentally grabbing and dropping of holstered guns is still an issue here when climbing and healing – especially when playing seated – but the in-game calibration tools allow gamers to choose exactly where their chest and waist holsters are on their body. This mitigated most of these issues. In all honesty, this is just one of those inherent issues of holstered objects in VR and is handled here in Espire 2 about as well as can be expected.

It needs to be said that Espire 2 suffers greatly from not having a jump mechanic, and anyone who has played Bone Works or BoneLab will likely find this omission to be maddening, as instead players are required to either run around low lying barriers or attempt a clumsy, vault-like action with their hands. A sore spot to be sure for a game that has some wonderfully embraced freedom of movement. 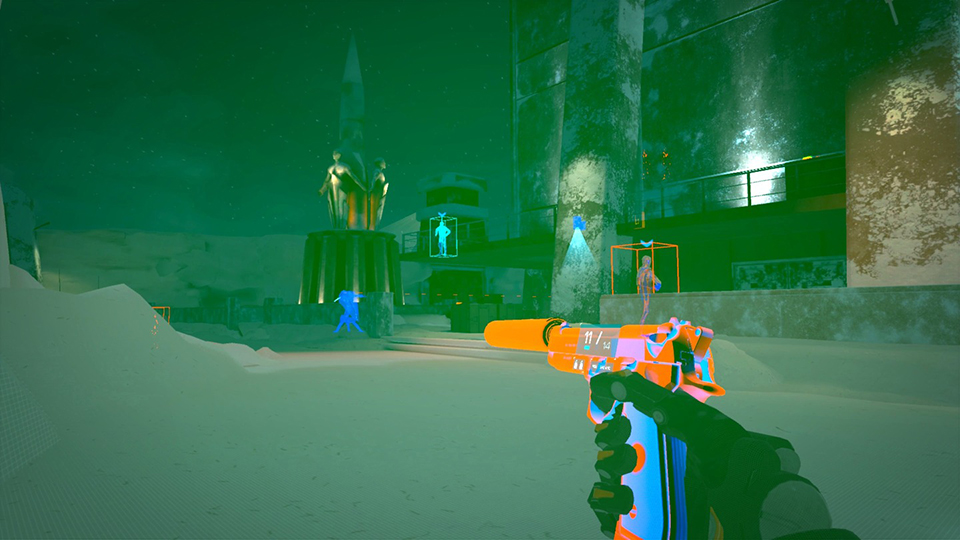 With so many abilities, it’s almost unfair how easy this can be.

For those thinking all this freedom of movement is going to make you motion sick, Espire 2 once again brings the suite of comfort options from the first game and goes further than pretty much any VR game I’ve ever played to accommodate those in need.

Espire 2 offers two campaign options. First and foremost is the single player campaign, in which levels are unlocked as you progress through the storyline. Your performance in each mission is rated and scored based on a combination of star rating and money earned. Upon completion of the mission and various objectives, cheats can be unlocked to allow gamers to go back and replay previously unlocked levels with a collection of mods applied; really pushing the whole sandbox nature of Espire’s level design. Further to this new weapons are unlocked by either exiting a level with new weapons on your person or awarded by completion of certain levels. All unlocked weapons are available in your armory and, for a price, can be equipped in your loadout at the shooting range prior to each mission. This is a mechanic I absolutely loved as I hate shooters that choose my loadout for a specific mission, making the whole level feel very scripted. This level of customization helped to give the campaign a sense of progression and cohesiveness that the story didn’t really provide.

The second way to play Espire 2 is with the addition of the co-op mode campaign. This is a small campaign that takes place between the first and second game, allowing you and a friend to jump into one of four missions. Gameplay here is much the same as the main campaign though with more of a focus on cooperative objectives like simultaneously activating two separate devices. Playing Espire 2 in co-op was a blast and was my preferred way to play. The A.I. isn’t any better here nor was the gunplay, but it just mattered less as the fun factor of goofing around with a friend was key. Ammo and guns are shared here so cooperation is key. The lack of in-game party chat could be a deal breaker for many, so hopefully this is patched ASAP. 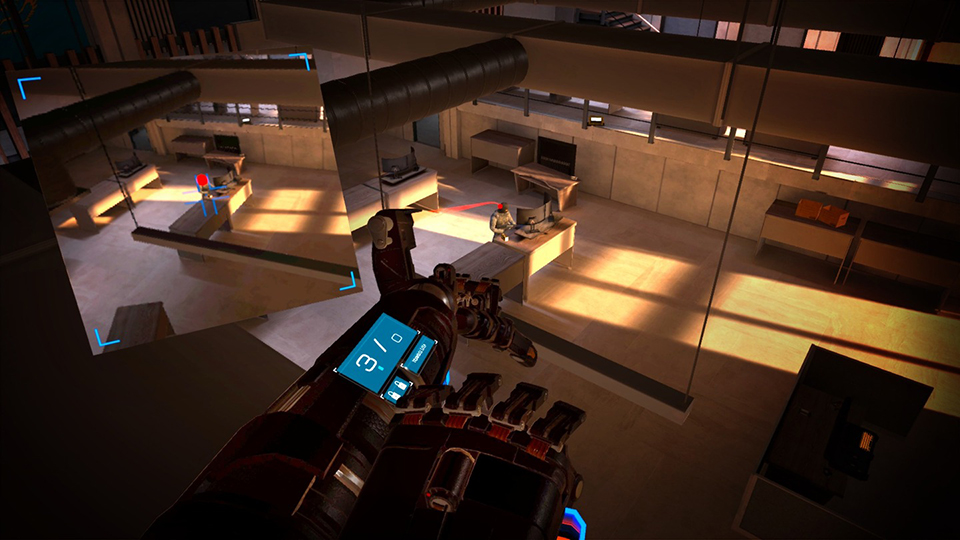 Espire 1 was plagued with some very poor spatial audio, making it very hard to place where enemies were coming from, shooting from, and headed to in general. Things here are better than the first in that enemies are easier to locate as they talk, whistle and walk around, but once alerted, I found it very hard to place enemies’ locations. It was even hard to tell what floor they were on. This is a real issue for a stealth game. Further to this, when in combat, enemy fire is so up front in the mix I found it next to impossible to place where any one shot was coming from, with little variation in sound direction between across the room or right behind me, let alone to the left or right. Matters are made worse as, like the gunplay itself, the guns lack any real weight or volume in the audio mix, really killing the whole sense of firing a high powered gun. The long and the short of it is that, unfortunately, the Espire 2 sound mix is only slightly better than its predecessor, and does really hurt the whole experience. Voicework here is serviceable, but nothing special. I did find that Espire 2 did a nice job of capturing the tone of a future-esque action thriller in its music choices.

Graphics are serviceable at best. With only a Quest 2 version at launch, Espire 2 is plagued by muddy, blurry textures and a real lack of any dynamic lighting which leaves the game world often feeling rather lifeless and generic. In fact everything from the character animations and level design to the weapon effects all feel very basic and bland. Nothing here is particularly bad, it all just lacks much in the way of originality or personality. Now to be sure the limited power of the Quest 2 doesn’t help things here, but the platform itself can’t really be blamed for everything since games like the recently released Red Matter 2 perfectly showcase what can be pulled off on the Quest 2 hardware. Still, I would like to see Espire 2 on the PC and PSVR 2 in the future.

This brings us to my final thoughts and review score. Espire 2 is an okay title, pretty much across the board. Unfortunately for developer, Digital Lode Immersive Media, it is so obvious that they want this game and series to be so much more than just okay. 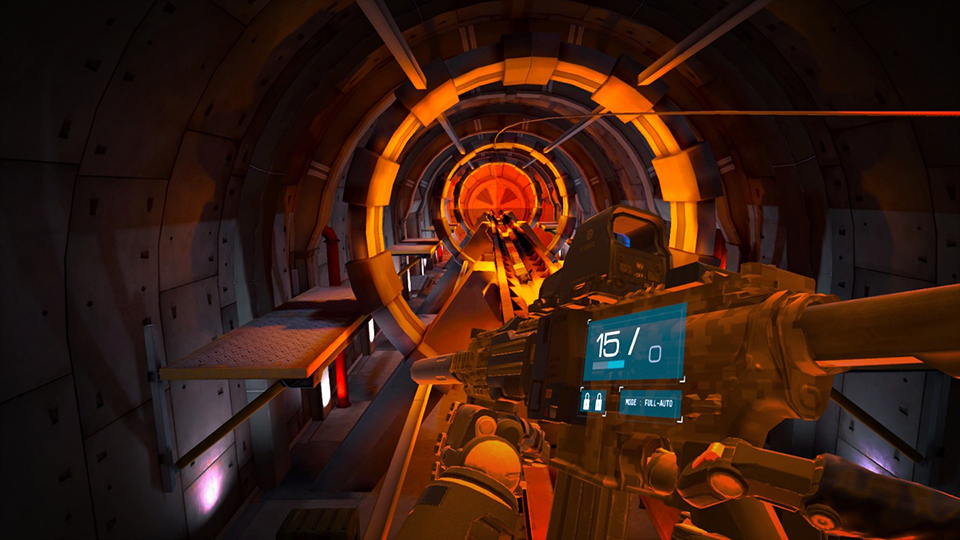 I said it of Espire 1 and I’ll say it again about Espire 2: comparisons to Metal Gear Solid are unfair here as many AAA studios have tried and failed to recreate what Hideo Kojima accomplished with that series. Espire 2 is certainly a step up from the first entry in the series, but it still suffers from so many of the same flaws. The A.I. and the audio design simply does not hold up to scrutiny, falling apart when pushed.

Espire 2 is a very ambitious action stealth title that wants to play in the big leagues but isn’t there yet. Regardless of its shortfalls and with your expectations in check, there is still fun to be had here, especially in playing around the sandbox-styled levels and unlocking mods and weapons to play with, particularly in co-op with a friend.

Tripwire provided The VR Grid with a press code for this title and, regardless of this review, we thank them for that!