This review has been updated from he original to encompass changes made since the games original launch and the release on the PlayStation VR headset.

The next multiplayer combat game from the creators of Firewall: Zero Hour is here and goes in a very different direction from that Rainbow Six style PSVR exclusive title.  Gone is the slower pacing of tactical combat and instead we are given a fast-paced E-sport style arena shooter, similar to Unreal or Quake, where teams of 4 must compete in king of the hill type action across several maps. 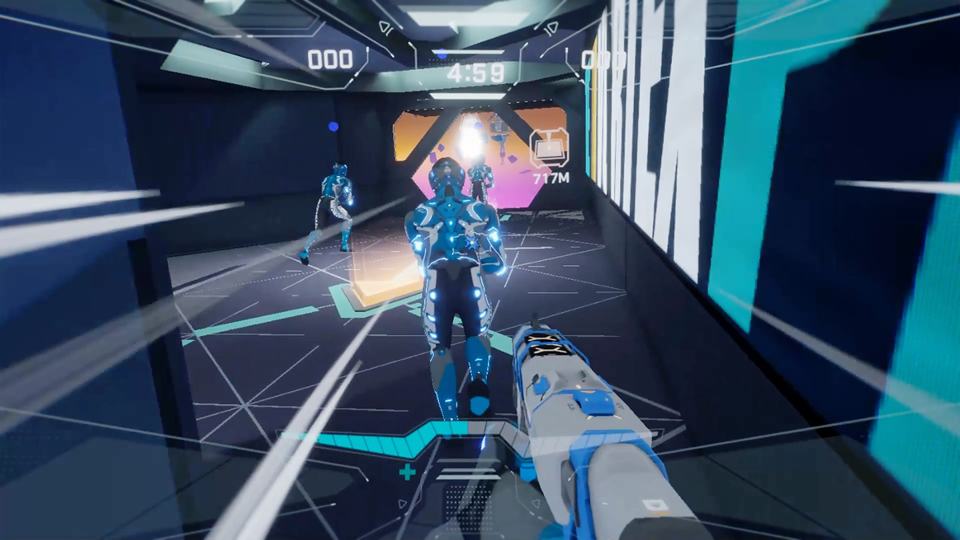 Solaris plays in traditional FPS fashion with a few little quirks that add a bit of depth to the action and plays the same whether you play on Rift, Quest or the PSVR save for the control options on the PlayStation side of things.   Your hands are tracked on the PC and Quest versions though your off hand offers little more than immersion as all your weapons are handled by your dominant hand and bringing the 2nd hand over just looks like you are stabilizing it without doing anything. With the DS4 and Aim controllers being your only options on the PSVR side, every weapon handles as if you were holding it with 2 hands so it pretty much plays identically to its Oculus counterparts save for the fact that game feels designed for the Aim controller, which is my favorite and most immersive way to play the game.  You can sprint and slide while running, allowing you to come around corners at an angle that your opponents may not be facing.   Each match starts you with a stock pistol with additional weapons being scattered around the map like shotguns and grenade launchers.  Also scattered around each stage are health pickups, mines, shields and a physical shield you can drop for some additional defense.  Control Point is the only game mode available which pits 2 teams of up to 4 players in classic king if the hill action where the hill in question randomly moves throughout the map after one team has spent 30 seconds of time in it.  Should a rival player enter that area, the timer is on hold until one of the factions is destroyed.  There are 6 randomly chosen maps and should you reach certain levels based upon the experience accrued from kills and victories, you can unlock custom modifications for your avatar with many of these requiring significant play time to achieve. 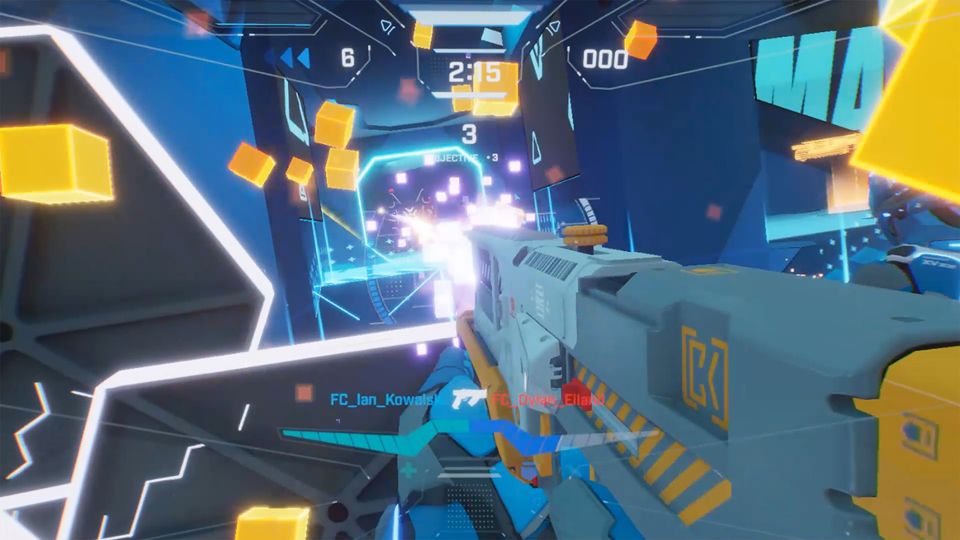 It’s worth picking up a bigger gun!

Solaris is all about polish and delivers a game with striking presentation thanks in large part to the superbly mapped avatars, both yours and your allies no matter which headset you play this on.  Other than some minor loss in detail and some slightly flatter looking textures, the Quest 2 version and the Rift version look surprisingly similar with the PSVR coming in 3rd thanks to its lower resolution screen, but still looks solid, just a bit blurry.  You play as an Athlon, Elite VR athletes who look the part as they wear some futuristic body suits with some very slick helmets.  Those helmets are how you view the action with the HUD in the helmet being very reminiscent of the Iron Man films and VR game and are a fantastic way of immersing you in this competitive world.  The stages themselves are rather stark and barren but pop thanks to the rigid art style used which combines simple color palettes and some neon lighting.  In truth, I got Tron vibes from the presentation and though it lacks the blue and black style from that franchise, the similarities are apparent.  That said, the 6 stages have dramatically different layouts but tend to look similar making the 6 stages feel more like 2 or 3 as they all felt samey despite their differences.   A visual standout is when an Athlon dies, causing him or her to fall or jump in the air organically in slow motion before fading out of existence which was an effect that just never got old.   Even watching your hands and arm animate just by twisting your wrists showcases realistic looking movements and when it’s all said and done, Solaris is strikingly beautiful in its simplicity.

Audio wise, everything sounds exactly as it should with some light commentary thrown in courtesy of PSVR Frank.  3D audio is here though given just how fast paced almost every moment is in here, I was relying way more on my eyes than my ears to determine where the enemy may be coming from.  Some ambient 80’s sci-fi music plays quietly in the background and never gets in the way as far as hearing the action, but when I noticed it, it added to the future sport presentation quite nicely. 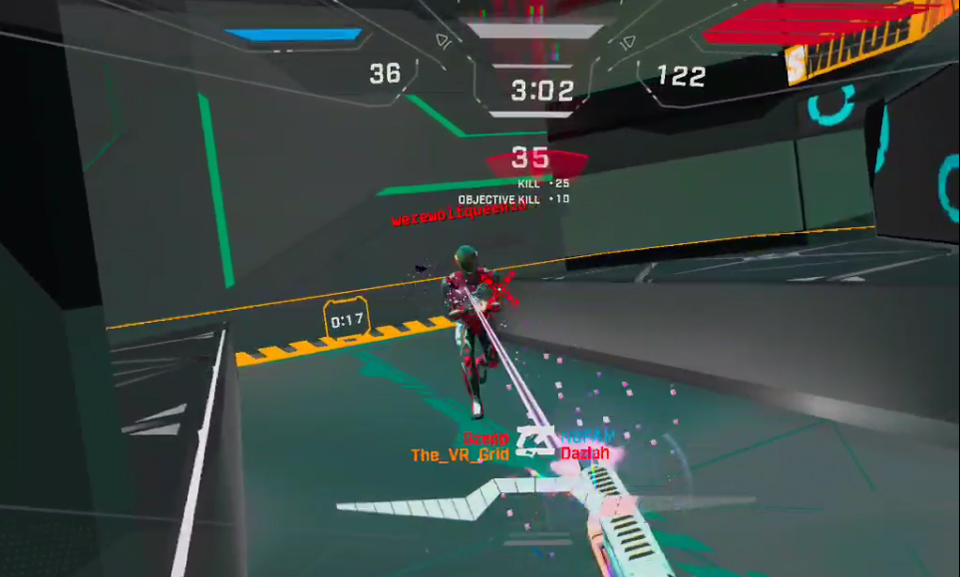 Be quick or be dead!

The best word to describe the gameplay in Solaris is refined, unfortunately the second-best word would be lacking.   A few of my smaller Oculus launch gripes have been remedied as you can now easily squad up with friends and can mute those that may be annoying.  Those additions are welcome, but they don’t fix Solaris’s largest issue, which is how repetitive it can feel.  I know they are going for the e-sport market with this one, but I personally need more from my multiplayer games as playing King of the Hill over and over just got old to me, especially with some of the balancing issues during matchmaking.  As many times as I had 4 v 4, I was just as often in 4 v 3 matches (or less) which makes for some very lopsided bouts.  You get more experience for finishing those one-sided rounds but getting my ass handed to me until the other team won just so I could run the clock for a few meager experience points isn’t exactly ideal.  Noticeably absent is a jump button which is obviously a choice made by the devs but I can’t really see a reason why it’s not here given the verticality in the stages and just how fast-paced this is.  Lastly, would be the promise of cross-play which has been delayed for reasons unknown and should be implemented sooner than later to help bolster the player base. 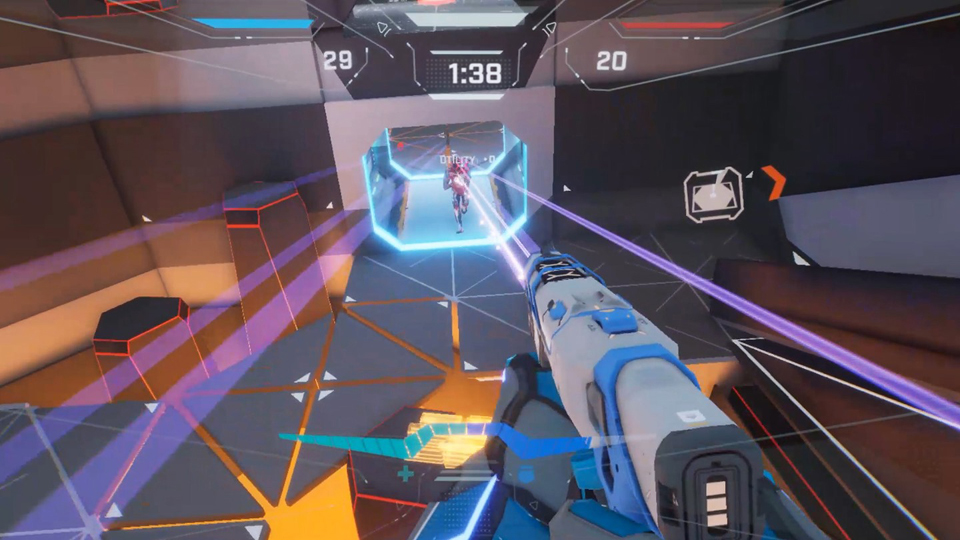 Head shots are always the way to go.

Solaris has an amazing foundation to build off of as it really does have some of the most polished gameplay I’ve ever seen when compared to other VR multiplayer titles.  First Contact really did nail the gameplay and future sport feel but as it stands today, Solaris just lacks enough substance to make me highly recommended this.  That said, if you are looking to kick some ass online against fellow headset wearers, what is here is still a lot of fun.

What would I pay?  The asking price on this is $25 which, 8 months after initial release now seems a tad high.  With so many other MP titles out there, $15 seems a little more appropriate for the current content…or lack thereof.

First Contact Entertainment provided The VR Grid with press codes for this title and, regardless of this review, we thank them for that!