Stealth games in VR are awesome, or at least, as long as they are made well, they are awesome.  We’ve seen our fair share of good and bad stealth games in VR and when it fails, it sucks…BUT when it works, it can be undeniably awesome as YOU are now the assassin, taking out foes from the shadows as a silent killer.  Enter Arashi, where you play as the Shinobi assassin Kenshiro, who must seek revenge upon the Six Oni of Iga, ruthless warriors that have carved a path of destruction across Japan, amassing power and armies in the process. 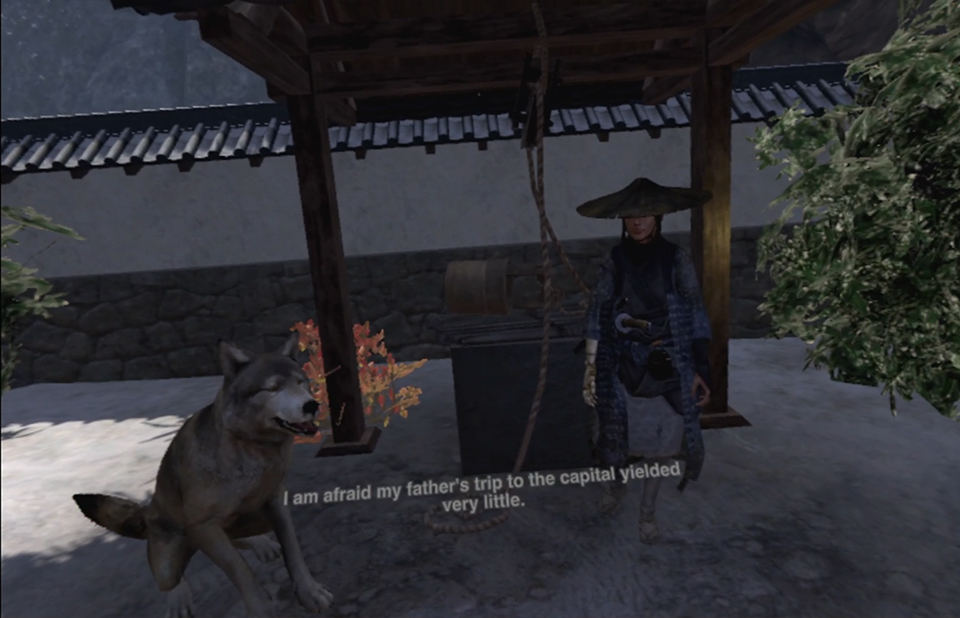 Your cousin will give you your next target. Your dog Haru is happy to help out.

2 Moves are required for this one with 2 control scheme options available, one that maps movement to the face buttons, the other which uses the direction of your Move controllers to navigate and was easily my preferred way to play.  Options for smooth or click turning with varying degrees of sensitivity are available for those that prefer one way or the other as well blinders which can be turned on or off.  l Initially you are given only a pair of swords and a grapple gun as your armament though soon enough you’ll pick up and bow & arrow, throwing stars, dart gun and a host more weapons to assist in all that stealthy killing. . You can also climb and jump to higher surfaces which will be key in taking out your enemies when hiding in the shadows isn’t an option.  Some lights can give you away and you can also hide in tall grass and when completely hidden from the enemy, you will look invisible not unlike The Predator, and when spotted a small reticle will pop up and become less transparent the longer you are within sight of an enemy soldier.  The stealth elements can feel a little basic at times and even exploitable, but they work, and I enjoyed sneaking above my foes, jumping down and dispatching them with a single strike before disappearing into nearby cover and using my various weapons and distractions to take out others.  In truth, it reminded me A LOT of the Tenchu series, and I mean that in the most positive way I can.  Beyond all that sneaking and killing is your dog Haru who accompanies you on most of your journey (he doesn’t like entering large buildings) and can be used to help distract or attack foes as well as dig for loot in specifically marked locations.  Enemies will come in a few forms from easy to dispatch peons to much tougher opponents and should you alert them to your presence, you’ll have to flee or defend yourself in some close quarters combat which is the weakest part of the game.  Enemies will come at you using scripted attacks and you must block those attacks and strike in between them, not unlike Golem, though this can be finicky as enemies can jump and attack through your defences causing unnecessary damage and death as you can only take a few hits.  There is a save system in place in the form of altars, that when found, give you a spawn point where you return too if you die, though any items found, and enemies killed up to your death will reset.  Additionally, there are a items and areas to be located that flesh out the story and mythos of the world making for a title with a ton of depth. 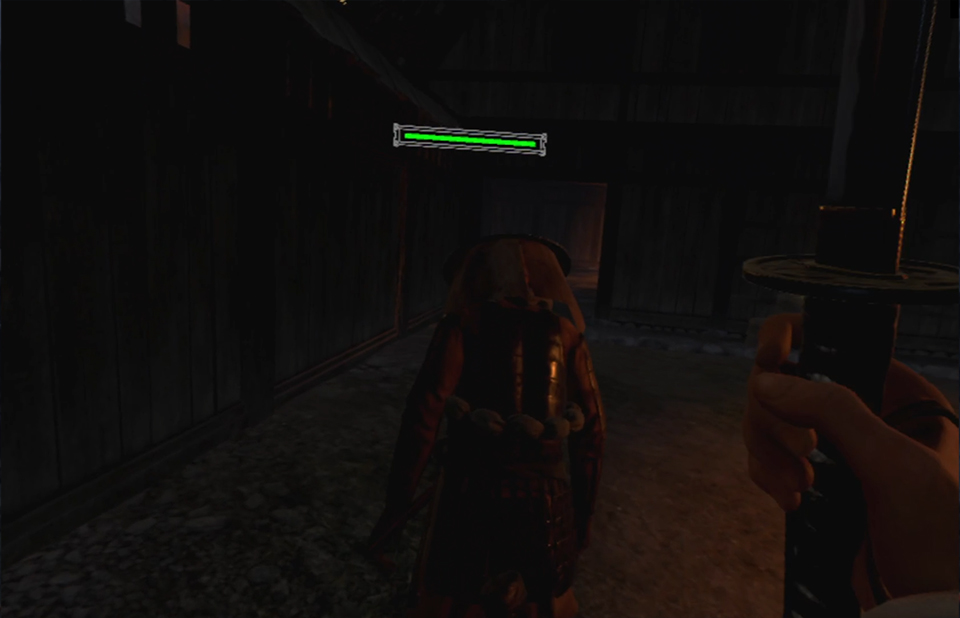 Sneaking up on your opponents is ALWAYS the best way to go.

Arashi looks solid, reminding me very much of Immortal Legacy in regard to dancing between that AA and AAA quality in presentation though it is held back by the lesser powered PS4 console with no PS4 Pro or PS5 support as of yet.  Aliasing is an issue but look past that and feudal Japan looks pretty slick.  You’ll travel along cliff sides, and forest trails, making your way to and through each of the 6 Oni’s fortresses, each with a slightly different theme and layout.  The enemies you face come in only a handful of forms with fair bit of detail so what they lack in variety, they make up for in quality.  Lighting effects are on point and to be used to your advantage as some lights can be extinguished, bathing that area in darkness and hiding you from sight.  Just standing next to a torch and seeing that light reflect off my body (yup, full body) and weapons added a ton to the realism factor.   Each of the 6 stages is broken up by waypoints that bring you to the next level with each section being loaded in its entirety save for some minor pop-in on environmental textures.  The levels are typically laid out with a few paths to choose from, each offering their own ways to take down enemy soldiers 1 at a time.  Minus your home, a small grotto, the game occurs largely during the nighttime, which makes perfect sense, and to aid in seeing the bad guys is ability to highlight enemies with a sort-of sonar pulse which will outline them in a blue hue, letting you track unseen soldiers as they go about their patrols.  When you cause any sort of damage, blood will spray for a second but that’s about as far as the violence goes with enemies showing no other damage and their bodies disappearing soon after being killed.  It can be a mixed bag at times, but overall, I was impressed with the presentation and found myself lost in the role of an assassin, dropping down upon my foes from rooftops for quick kills, or lurking in the shadows, waiting for my turn to strike. 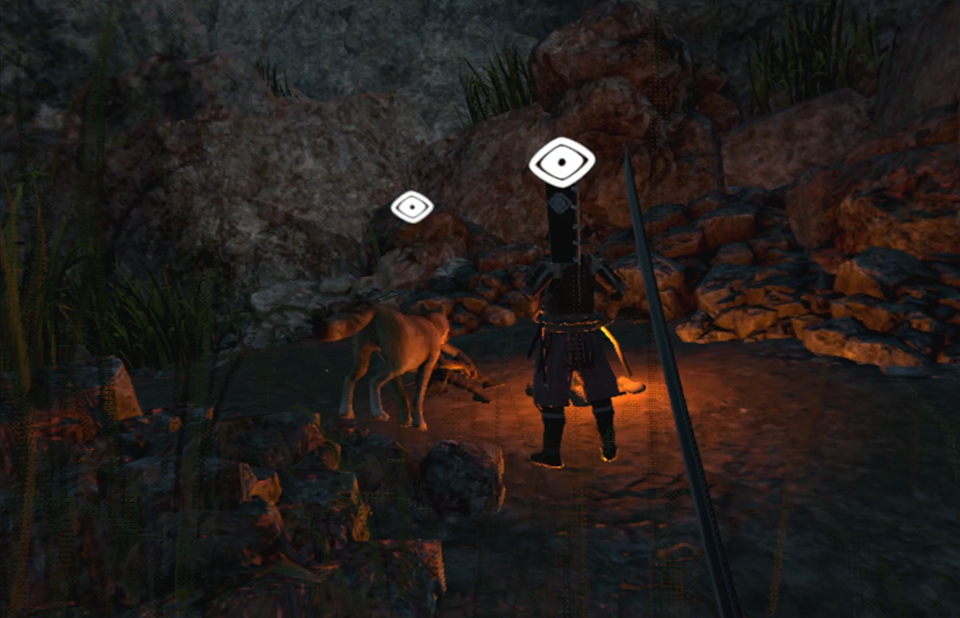 Haru makes for an excellent distraction!

There is a lot of voice work in Arashi though it’s all in Japanese with subtitles which added a lot to the authenticity the game is going for.  Music comes in a much more subtle form typically falling into the background, subtly adding tension to all that sneaking around and kicking in a little more with a drum heavy beat when your are in combat.  3D audio is thankfully present and will be needed to help alert you to nearby patrols with the sounds of their footsteps helping give them away.  You can also make noise should you sprint so it’s best to stick to a slower pace.  The ‘ting’ of blades as they connect and the screams of the soldier’s death is always satisfying and just about every action you can do in the game from leaping to rooftops, taking out a foe from a distance with a shuriken or bow or just stabbing fools from behind, is satisfying. 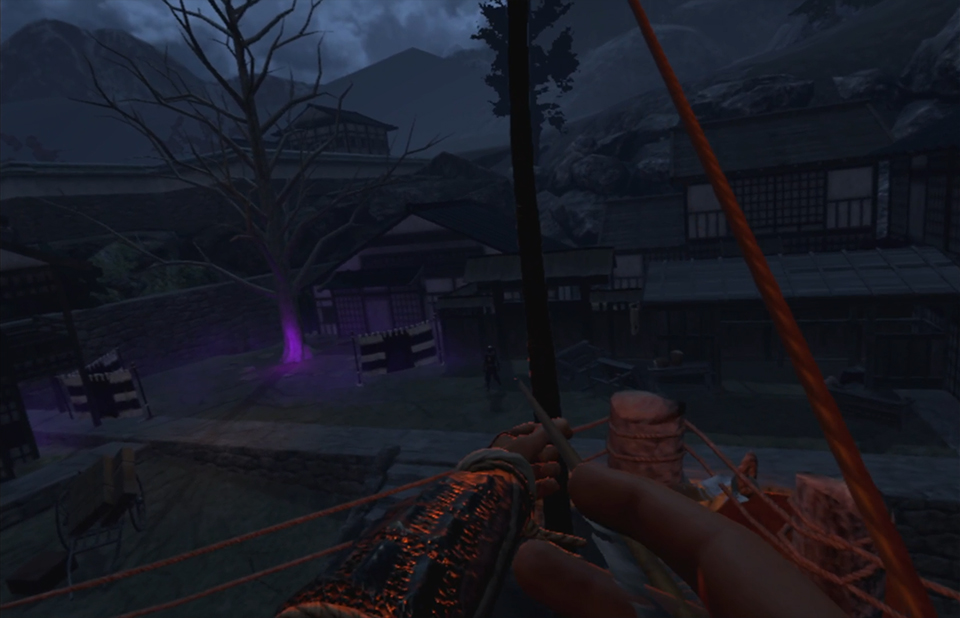 Death from above AND from a distance…this is the way.

I’ll preface this next little bit by saying that I really enjoyed my time with Arashi as it really brought me back to playing Tenchu when I was much younger but adds a ton of depth that really surprised me.  Haru, your dog, behaves as he should, but he reacts to geometry in some crazy ways, even getting in the way of a passing soldier who will stop and just stand there until I told Haru to move on, whereupon the soldier continued on his merry way…and subsequent death by my blades.  The save system can also feel a tad unfair at times as they can be spaced far enough apart that death had me repeating 20 minutes of game, killing the same guys I already killed just to finally make it to the dude that killed me and trying to find a way to surprise attack him to avoid the close quarters combat as much as I could.  If you can avoid those sword fights, you’ll have a way better time though the bosses demand this action and I struggled against almost every one until I found a sweet spot with my blades that would block most of their attacks save for when they just got to close and attacked through my defences with trial, error and luck getting me through those encounters and onto more peon killing.  As you accrue more weapons, you can choose 4 of them to be in your loadout for the next mission which is awesome as variety is the spice of life, but in order to scroll through your armament, you need to press either square or triangle to cycle though them which is a pain in the ass and tedious as it’s also easy to scroll past what you’re looking for, especially in a panic situation though holding those respective buttons down will bring up your sword or grapple gun quickly. All these gripes are minor in the grand scheme of things for one very simple reason, the stealth works, and no matter what I may have struggled with in prior moments, whenever I made my next kill, it was always satisfying, and I felt like a badass assassin. 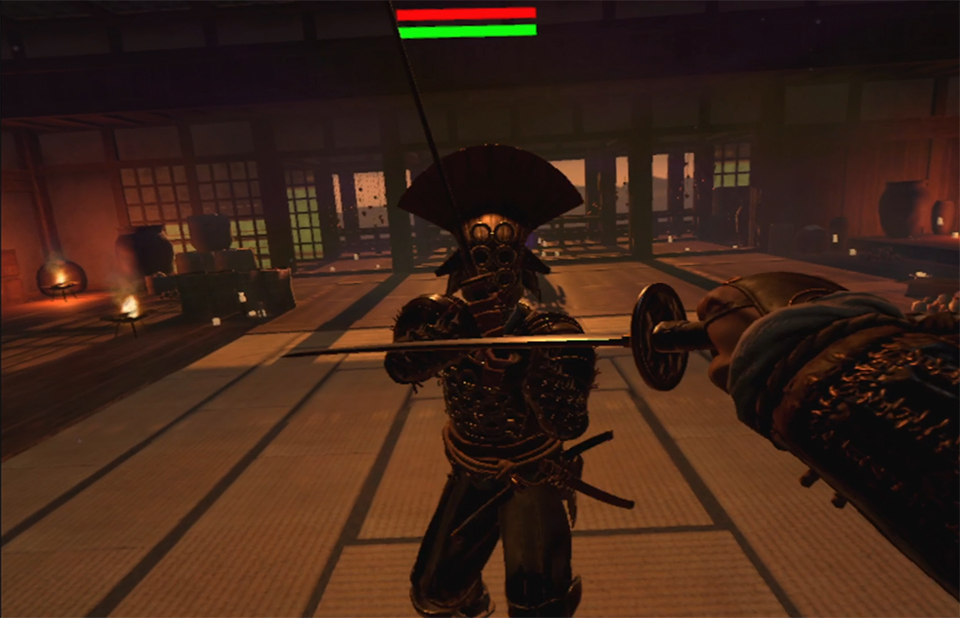 The melee combat might not be great…but it looks cool!

Arashi has some kinks to iron out for sure, but there is a ton of game and gameplay elements in here to keep anyone entertained.  The campaign is a lengthier one taking somewhere in the 8-hour range to beat with all those collectibles to find in every stage adding to the replay factor.  The story is a dramatic tale about revenge and is fleshed out enough to make me care about my cause, grinning as I cut a swath of destruction the hapless soldiers before dispatching the next tyrant plaguing the people in his land.  If the notion of being a stealthy assassin appeals to you, Arashi delivers a ton of game, story and violence and may just be one of the best stealth games we have in VR.

What would I pay?  This is $30 US and totally worth it.  Taking the time to make every kill a stealthy one, planning my route and executing it flawlessy is some of the most rewarding VR gameplay I’ve experienced in awhile.

Endeavor One provided The VR Grid with a press code for this title and, regardless of this review, we thank them for that!