Hearkening back to games of yester-year(the 90’s) is Volume, a stealth action game very reminiscent of Metal Gear Solid, or more specifically the VR missions.  Released awhile back, it received a VR treatment when the PSVR first launched.  Can old school mechanics work in a VR world? 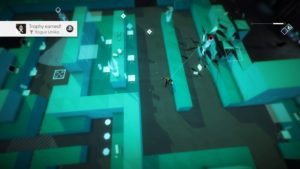 This is the standard non-VR view, though VR looks pretty similar. See below

For those unfamiliar with MGS, you view each map from a top down, 3rd person perspective and navigate through maze-like levels while avoiding enemies who will stop you on sight.  The same is applied here, but in VR you can manipulate the map by changing the viewing angles and zooming in or out.  It works, but it can be awkward to manipulate the levels and I found myself typically leaving the levels as they were loaded.  On a few occasions I had manipulated the map and hidden vital items from my view, a minor annoyance, but it is easy to do. That’s pretty much it for the VR portion of this game except for the 30 extra missions included solely for the headset, which continues the main campaign story.

Thankfully, in or out of VR, this game is really good.  You play as Locksley, a modern day Robin Hood who broadcasts his thieving from the rich in an attempt to expose a corrupt government and its affiliates.  Truthfully the story can be very overwhelming as it is told through in game audio, messages to read and brief level descriptions.  There is a lot of info to siphon through and thankfully the game is engrossing enough to motivate you to do just that.  Tight controls and short levels will have you playing “just one more level” way past your bed time.

This game is full of polish.  The art style and visuals are a joy with the overall design using stitched together geometric shapes to create the levels around you.   It definitely evokes that feeling you are playing in a simulation and works really well.  Dynamic lighting and tight level design make this just some good, clean fun.  The audio here stands out as well with a melodic opening track you would expect from the genre as well along with other music that fits the play style.  The voice acting as well is top notch and really helps hammer home the story.

With 100 missions(+ the 30) each taking between 30 seconds to 3 minutes there is a lot of content here.  Many of these missions will take you longer than those times on your first playthrough as you figure out the puzzles that lie before you.  The slow introduction of different enemy types and abilities as well as different ways to navigate through levels ensure that you never get bored of the game and are given plenty of time to adapt to these changes.  The pacing here is fantastic and when you think you’ve seen it all, the game mixes up the action with a new variable. 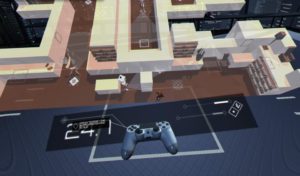 Other content available includes creating your own levels which is complex, given the nature of the game.  If you want to try your hand at level design than go crazy.  With that comes the option to play custom levels which also are ranked by popularity so you can play some top notch, out of story content if you clamour for more gameplay.  These are both welcome additions that extend the life of this game for those that just enjoy the mechanics.

In or out of VR this is a great game and a great throwback to games of old.   Its mix of classic and modern with an engrossing story and a tonne of content that will call you back again and again and again.

What would I pay? $20 for this is a steal and well worth every penny.  It’ll call you back over and over and just playing a few missions feels like progress.  If you have any interest in stealth games, buy this!