I admittedly knew nothing about Gungrave prior to the VR announcement earlier this year.  A trailer during E3 showed some brief footage that definitely left me underwhelmed but soon after praise for the original PS2 game showed up, so I was willing to give the VR version of this game the benefit of the doubt.  For those that don’t know, Gungrave is a mixture of 3rd and 1st person shooter action and with the complete VR package you also get some side-scrolling shooter bits as well making for a broad range of shooting types. 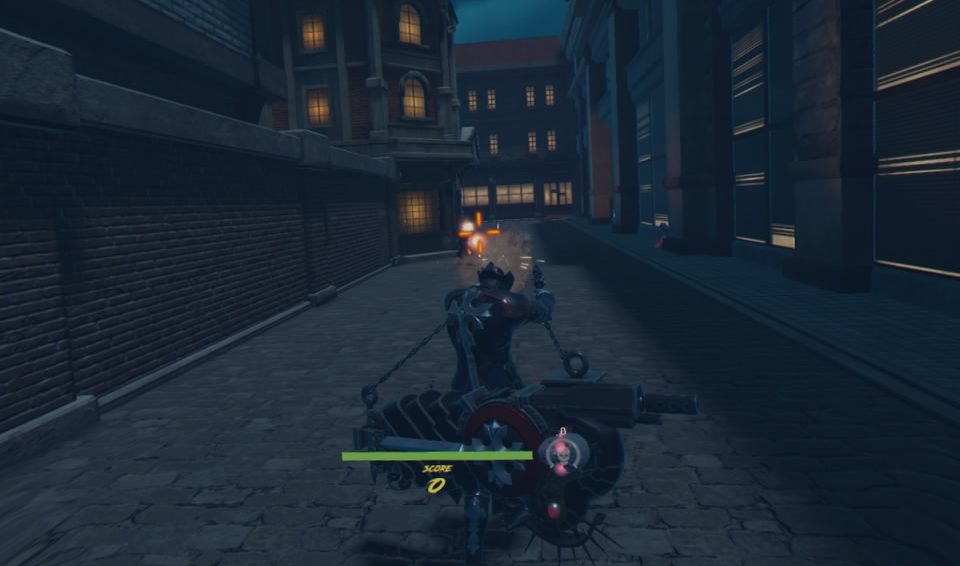 Despite the variety of the shooting mechanics, the DS4 is the only controller supported.  A few of your powers carry over from mode to mode but the bottom line here is to shoot everything.   The 3rd -person action lets you run and jump around the play area while shooting at whatever you can though unfortunately, this mode only includes click-turning which makes the combat seem somewhat unfair.  The first-person action turns this into a stationary wave shooter, though one stage allows you to move up or down and left or right while flying on a hoverbike(?).  The last mode, available in the UN content, is the side-scrolling action which plays like Contra only where you aim is determined by the angle of your headset.  It’s a dual-wielding affair though your guns are only mapped to a single shooting button, so the dual wielding is cosmetic only.  Your guns overheat so you need intermittently cool them off with a press of a button.  There is also a slow-mode which lets you move things at a crawl for a few seconds and a special mode which gives you a more powerful gun to unleash hell for a few seconds.  No matter which mode of play you happen to stumble upon, the name of the game never changes.  Shoot everything until its dead. 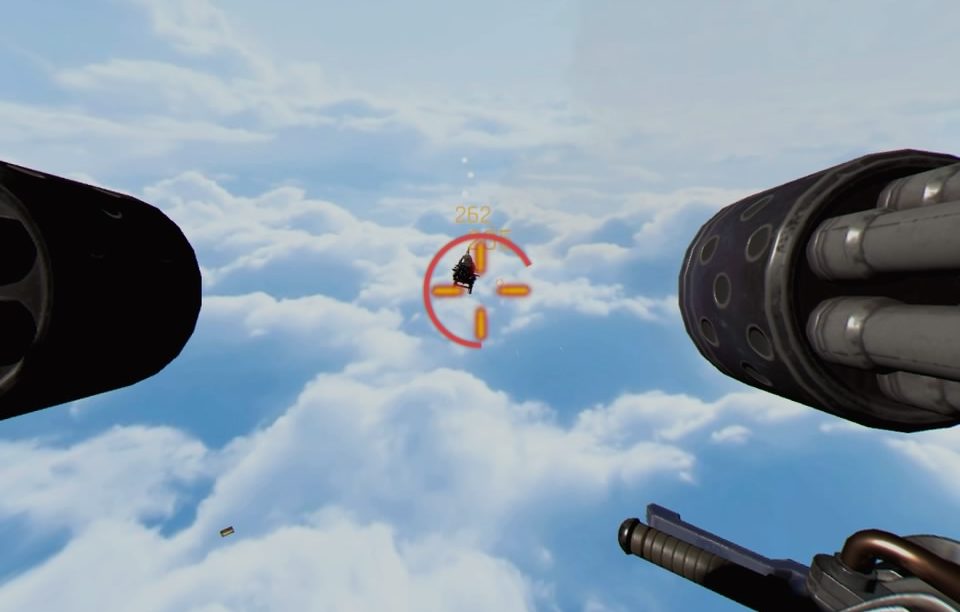 Take to the skies to defeat all these bad guys!

Gungrave looks pretty good in VR at 1st glance.  The levels are crisp, and the character models are fairly detailed though this is only readily apparent when enemies are up close, which is typically not a good situation to be in.  Many of the stages are very small/short in the base game, which is probably the trade-off for the crisp visuals.  Enemies look good, though many suffer from a lack of animations often repeating the same few movements or turning 90 degrees without any animation.  Explosions and other environmental items pepper some areas though are once again plagued by limited animations when they are destroyed and the overall sense of the gam. I get from the visuals is that this is a 15-year-old game ported to VR without much in the way of modern-day enhancements.  The scale of some of the bosses is pretty impressive and the 1st person levels do bring the action closer, though that comes with many restrictions.  Gun animations are jerky in any mode and the 1st person stages do feature some very obvious 2D backgrounds that do detract from their respective stages.  Still, when it’s all said and done, I thought the game looked alright.

On the audio side we get a whole whack of gun sounds and some other effects that match the action.  The music is an odd mixing of light jazz(?) that does fit the over-the-top cartoonish action.  Your assistant helps you out when needed during the campaign filling in some gaps in the story and basically explaining who you need to kill next.  Bottom line is the sound here is simplistic, but it works. 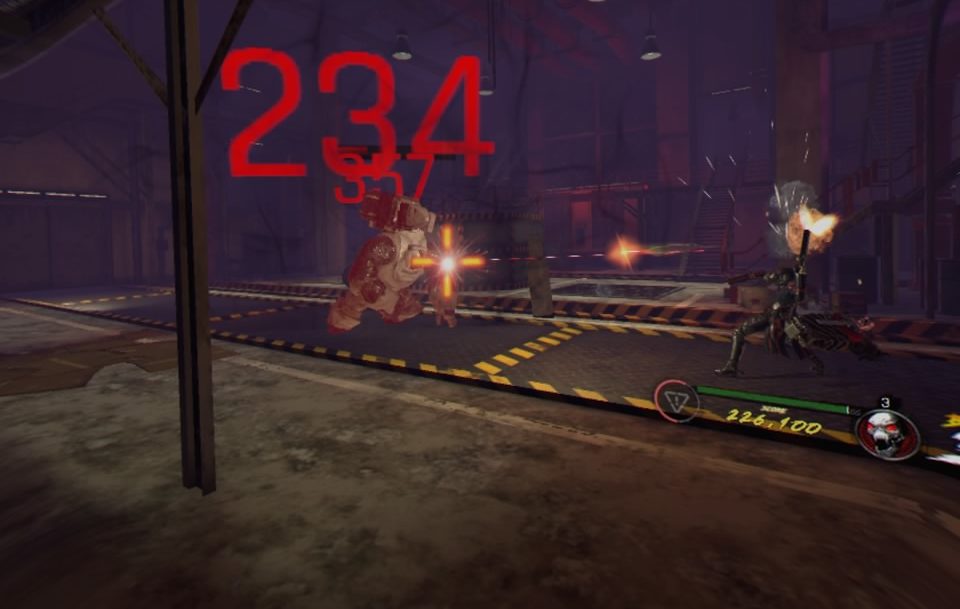 The UN content gives you some 3D side-scrolling action!

With the good out of the way, I have a few issues to bring up.   Some of the stages are so short it’s laughable…visit one area, kill some peons, fight a boss and done.  The story is nothing more then a blurb giving you an excuse to kill everything in sight.  All the aiming is done by head tracking, which is fine but with the only option for turning being of the click variety, it can be ridiculously hard to stay locked on enemies while you move around the game space.  Boss fights carry on way to long to the point where I think this was intentionally done just to extend the relatively short game time as the base game took me less then an hour and half to beat and the UN content only adding around 45 minutes more making the entirety of the experience lasting right around the 2-hour mark.  Harder difficulties are available for repeat plays so if you want to challenge yourself and dig the mindless action presented there is a reason to come back.  Additional skins are also available though it seems to be limited to only one option which requires you to get an ‘SS’ ranking on all the stages.   The UN content felt a little more cohesive and includes the sidescrolling bits which reminded me a fair bit on Contra but really just consists of looking around to aim your gun and unleashing all hell.  There is also a lot of looking around which is fine, but the final boss forces you to almost constantly look up and then look up even higher during specific attacks causing a lot neck discomfort.  Lastly would be the repetitious nature of it all as even when your viewing angle changes, the action still feels so very redundant. 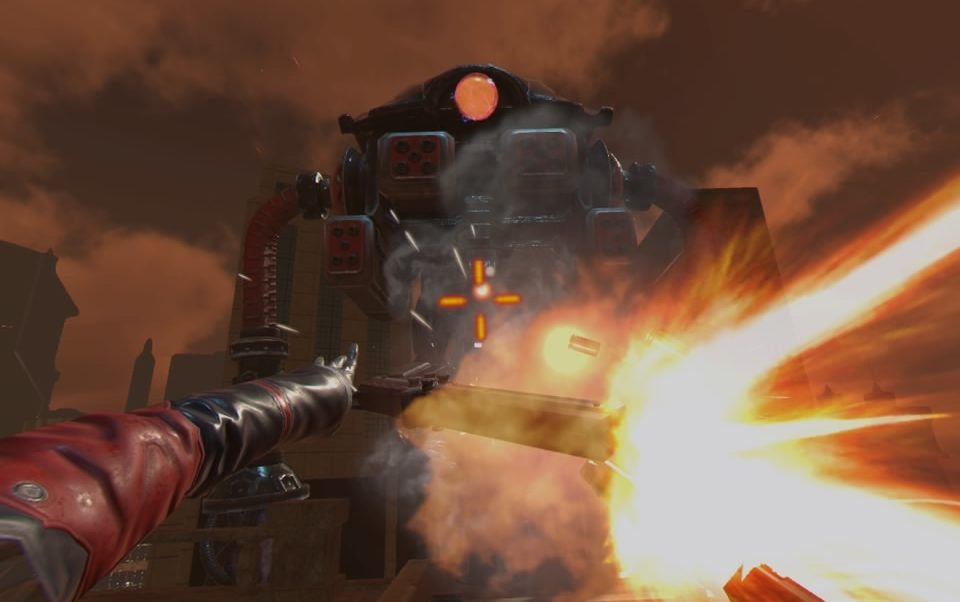 The final boss battle goes on waaaay to long.

Gungrave’s port to VR left me feeling wanting and in truth, many of the mistakes it makes are some that were made back when this generation of VR first launched.  Had this come out at PSVR’s launch, I could be a little more forgiving of its shortcomings as there are some bouts of fun to be had here.  That said, we have been treated to so many better titles across similar genres that Gungrave just feels like it doesn’t belong.  The mechanics bely the games age and by the time I finished all the games content, I was glad it was over.

What would I pay?  The complete package is $40 which is nuts.  If this were half that price, I’d still be hard pressed to recommend this except maybe for fans of this game from yesteryear.  I had a few moments of fun, and the boss battles were a highlight, but the action is just to mindless to entertain me for anything more then a few moments.

XSEED provided The VR Grid with a code for this title and, regardless of this review, we thank them for that!