Let’s take a trip in the way back machine and go back to June 2016.  Consumer VR had only been available for a handful of months with a bulk of the games feeling more experimental and catered to room scale titles or archery sims.  PlayStation developer Insomniac Games took a break from consoles and attempted to translate 3D action platformers to VR, placing you in the role of Victor Howard, the lone survivor of a rescue mission sent to find a missing expedition sent to the Antarctic that included his wife.  Now it’s up to you to find any survivors and navigate the frozen wastes though it soon becomes clear that something sinister is lurking in the shadows. 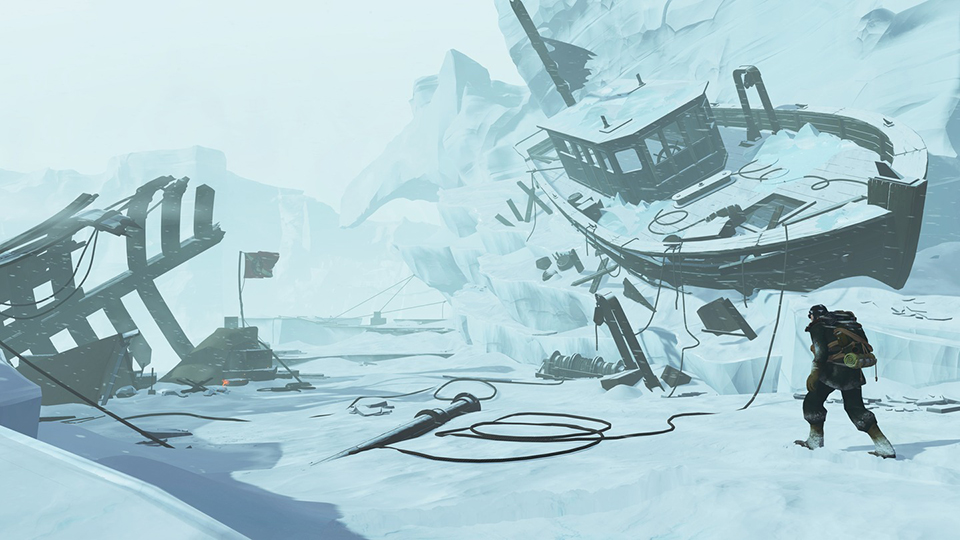 It’s starts off pretty bad for Victor and it only gets worse.

You are going to want a gamepad for this one as it’s just more comfortable than using the Touch controllers though given the simplicity of the game’s mechanics, Touch controllers will still get the job done.  This plays exactly like a dialed back 3D platformer with you, as the camera, controlling Victor from behind him.  I say dialed back because there’s not a lot going on compared to larger titles like Tomb Raider or Uncharted as you’ll only have access to a few weapons during the 4-to-5-hour campaign and are relegated to the same few tasks like walking, running, sneaking, shooting, melee and climbing with a few of these modes also being contextual.  When you nab your rifle, pressing the Right trigger brings that gun out and a red reticle highlights where you are aiming.   Climbing is handled by being near an ice face and using your Ice Axes to move in all vertical directions with a few leaps and precarious moments sprinkled in for good measure.  Those same axes are used in the melee combat sections though unless an enemy is the same size as you or smaller, it’s best to avoid them or to take them out from a distance as you can only take a maximum of 4 hits with many larger enemies being able to take you out in 1, typically morbid, attack.  Depending on what is happening, Victor will react accordingly so when stealth is paramount, he will automatically crouch low and when no danger is present, weapons will be put away and he will walk as normal with the game constantly bouncing back and forth between the various mechanics.  You’ll find campsites along your journey that have brief written logs from survivors of the expedition with a forgiving checkpoint system in place that restarts you at the beginning of the current section you are at, typically losing no more than a few minutes at most should you perish, and you will most definitely die a few times at least. 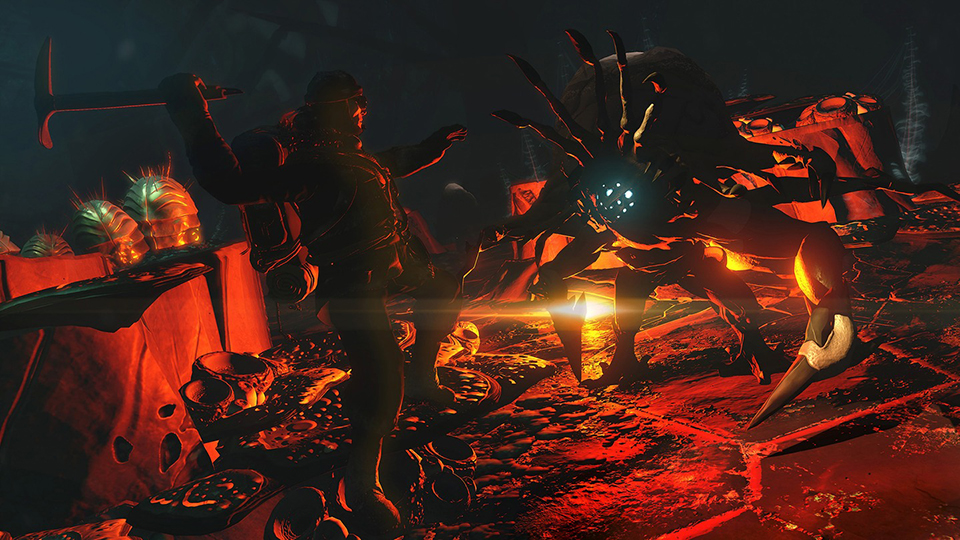 It’s best avoid melee combat when you can

Edge of Nowhere is not the prettiest game in the headset, especially after playing the awe-striking HellBlade VR, but by no means is it a slouch, offering up some fantastic environments and wicked use of scale.  Other than some flashbacks (and hallucinations) the majority of the game takes place in the cold wastes of the Antarctic meaning the game, at times can look very bland and largely white thanks to the snow covered…everything.  As you scale mountains and navigate cave systems, you’ll climb higher and higher giving birth to one of the more impressive demonstration of physics as chunks of glaciers and falling stalactites shatter upon impact, leaving icy debris below you.  It doesn’t take too long before the mystery surrounding the expeditions disappearance is revealed and that mystery leads to some more surreal environments and enemy encounters.  While the environments opt for a more realistic look, the character models are a little more cartoonish, reminding me of 90’s era Resident Evil visuals, but they more than get the job done with NPC’s having a fair bit of detail and the monsters you face looking more and more grotesque the further you venture into the Earth’s depths.  Stealth sections will have you moving around in almost pure darkness with only your headlamp to guide you offering up some awesome lighting effects and Victors head is mapped to your own so wherever you look, he does adding a little extra immersion though by that same token, those headlamp beams of lights can be skewed if you are looking at a place Victor shouldn’t be able to see, but that’s not problematic.  Alien flora and fauna spice up the cave systems presentation and the latter half of the game offers up some dramatic changes in the scenery, though I won’t spoil that here. Regardless of the visual shortcomings, there is still plenty here to like with game still coming off as near AAA. 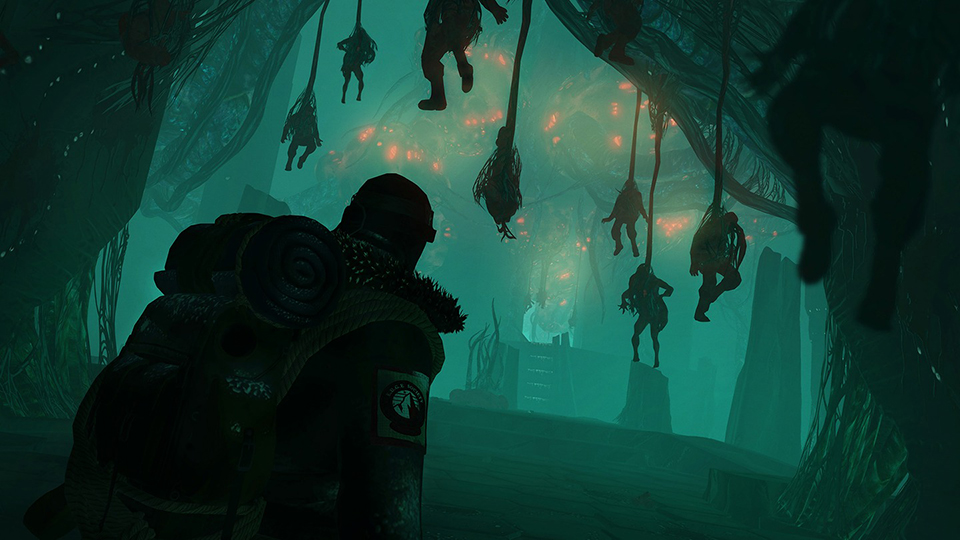 Things just get weirder and weirder.

Insomniac Games is no slouch when it comes to 3rd person action titles and the stories that drive them and while EoK may not be as lengthy as their other titles, there’s enough narrative involved to tell a fun sci-fi story thanks to some top-quality voice acting  and a decent script.  3D audio is present here though as almost all of the action takes place ahead of Victor, I rarely relied on that for anything other than immersion with music kicking in at the right time to hammer home the drama or suspense of whatever is happening at that time and all things considered, the audio presentation is near flawless. 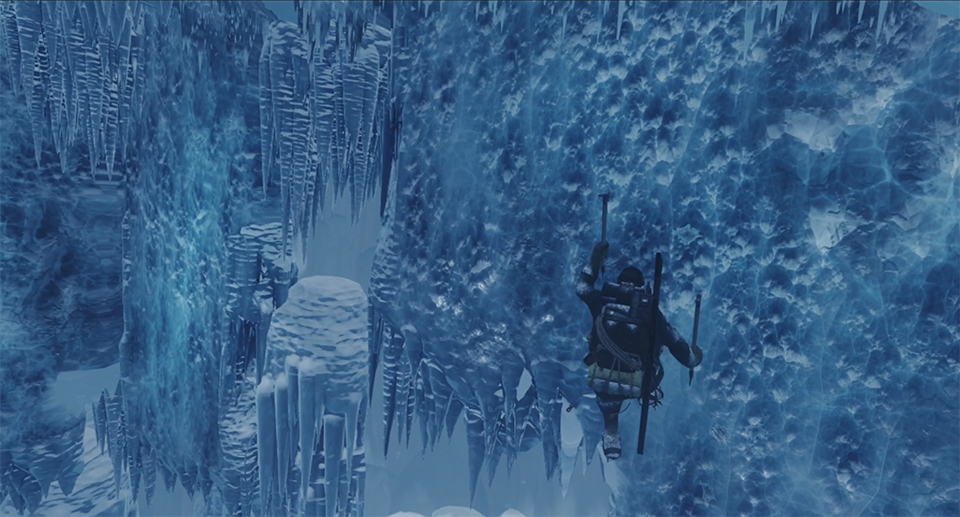 There’s a fair bit of dangerous climbing to do.

Edge of Nowhere is a great game, it really is, but suffers largely by the design choices made by the developer as this came out when consumer VR was only a few months old, and the lessons learned since than highlight just how restrictive this can feel at times.   The stationary camera only lets Victor move forward meaning all encounters are almost exclusively ahead of you making this feel extremely linear.  I have no problem with that linearity as some of the best games every made are like that, but in VR, it does feel a little restrictive.   Sometimes the camera is your enemy as well and on numerous occasions I found myself accidentally falling off ledges or missing jumps I thought i could make just because my fixed angle didn’t let me know just how large of a gap I decided to leap towards.  Encounters are also repetitive as no matter what enemy is before you, sneaking and combat never really changed from the 1st minutes of the game to the last highlighting how small of an experience this actually is when compared to similar. non-VR titles.  That said, it still tackles all the core elements that make games like this so appealing and while its shortcomings do hamper the fun factor, it’s forgivable consider it’s 5-year age. 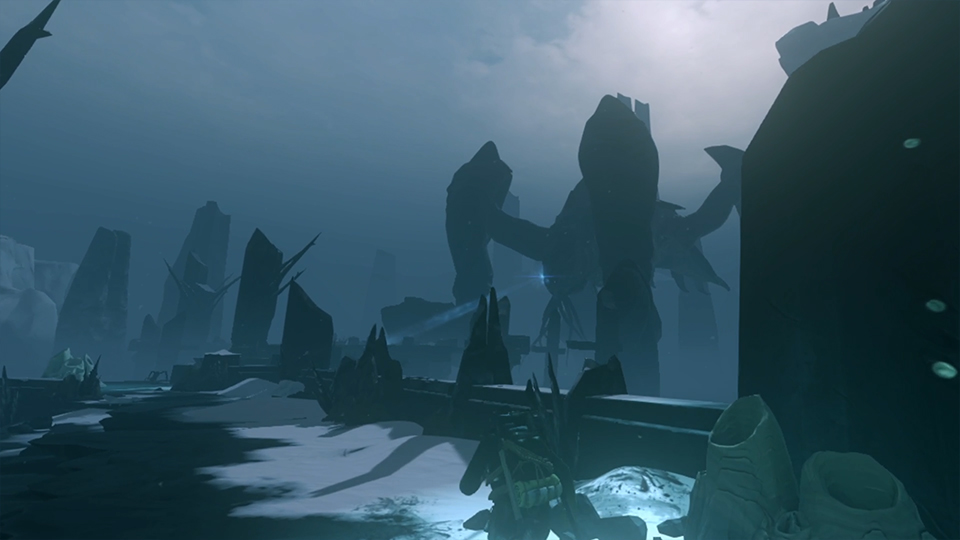 Some of the scale used in here is absolutely fantastic!

Those looking for a taste of AAA 3rd person action titles in VR should not look past Edge of Nowhere as it really does play like Tomb Raider or Uncharted, just on a smaller scale and for the most part it works.  Huge encounters and a near endless draw distance disguise how small of a game this is but if you can accept that this is essentially the 1st AAA 3rd person title made available for consumer headsets, it’s easy to forgive what it’s not and enjoy it for what is, a solid 3rd person action/adventure in VR!

What would I pay?  I have no idea what the price was on this when it launched but at the current $20, I highly recommend this if you are looking for something a little more AAA.  It’s not perfect by any stretch but what’s here is still fun, disturbing and satisfying and packed full of some sci-fi/horror goodness.