Rhythm of the Universe advertises itself as “a single-player action-adventure puzzle VR game built to push the limits of PC VR” which sounds absolutely amazing as I love to see a game fully embrace the amazing medium that is Virtual Reality.  Ionia is the 1st chapter in this 7-part series that places you in the role of Allegro who, with his sister Allegra, must help save this magical and musical world from a vile threat. 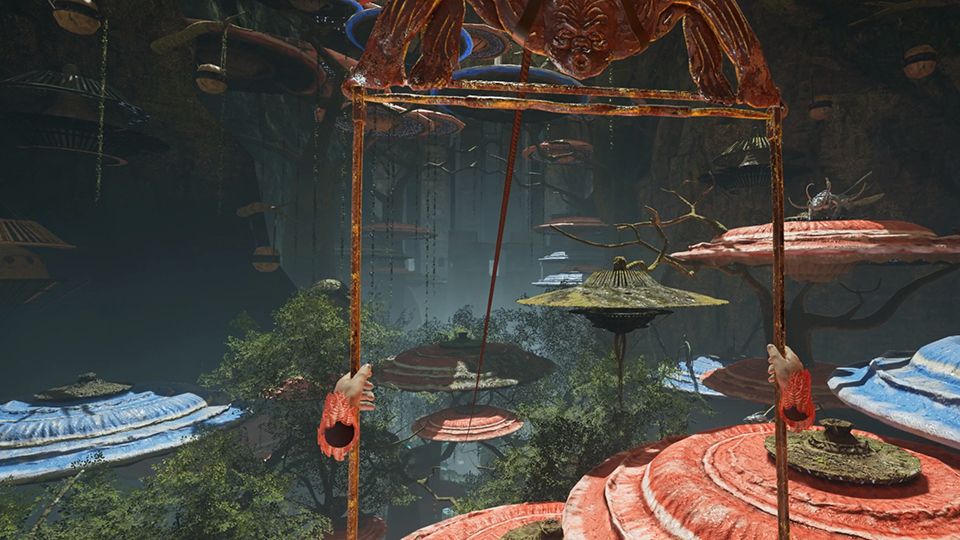 Ionia can look amazing at times

You’ll be navigating this fanciful world in traditional VR first person action with a few locomotion options available though no matter which one you go with, it feels clunky.  Default controls are snap-turning and teleportation only with both of those controls being handled by the right thumbstick causing a few accidental teleports as it’s all to easy to press the thumbstick in while turning.  Unfortunately, snap turning is the only option at the time of this review though you can put on smooth movement which allows you to walk around the environments with the left thumbstick but with snap turning and teleportation still active, I still accidentally teleported while turning and for you lefties out there, you are out of luck as their is no option to switch button placement.  You can run while pressing in the left thumbstick, grab specific items needed to solve your next obstacle as well as climb marked walls and vines to get around obstructions. Regardless of those shortcomings, starting the game gives you a nice little tutorial and history of the world as told by some slick imagery and narration as you navigate a dark void populated with rocks covered in paintings.  After that, you are treated to a cinematic 2D cutscene before taking control of Allegro, following his sister in search of the Harpa, a being connected to the planet that has been wounded thanks to the destruction of the forest.  Once you embody Allegro, you navigate through the linear story, walking through caves and halls, riding a zipline, interacting with creatures and solving a few music based puzzles that require you to locate items, play a piano-type instrument, and take in the wonder that is Ionia. 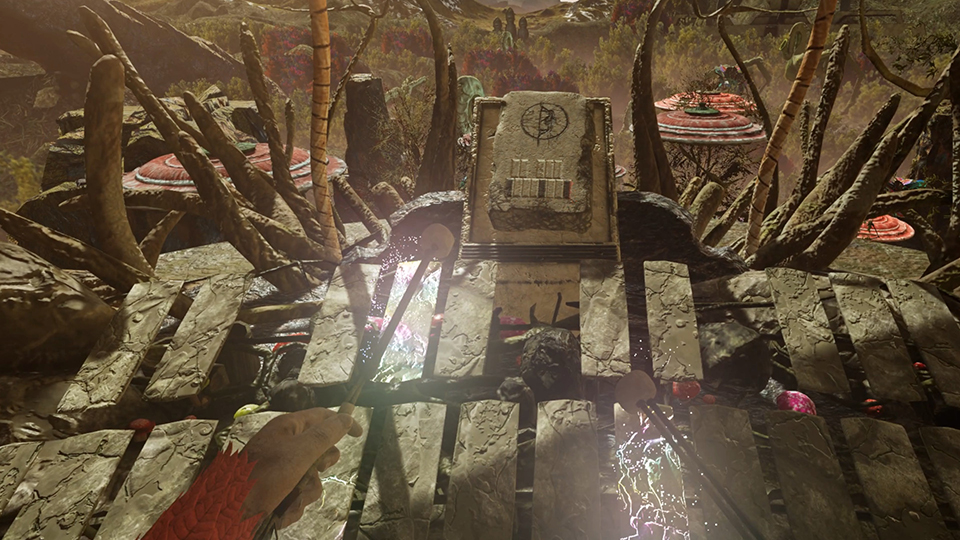 Music is the core of this game.

ROTU’s strength is in its presentation which looks damn slick thanks to some dynamic lighting and high-quality visuals that can be adjusted to your PC’s performance level.  The brother and sister duo travel through ancient Ionian structures and catacombs meeting a few different creature types along the way, all of which are inspired by music.  The level of detail in the environments is impressive with the flora looking particularly lush, vibrant and coming in a variety of shapes, sizes, and colors.  The latter half of this 1st chapter will have you roaming a cave system lit by bio-luminescent plants which looks stunning in the headset.  The creatures you meet also look fantastic and often let you get very, very close to them and those moments couldn’t help but remind of a particular dinosaur themed movie thanks to a couple of familiar scenarios.  It’s not perfect and their a few visual shortcomings like hands just sticking to climbing surfaces, foliage that doesn’t react to your touch and some jank when cut scenes are triggered but overall, what’s here is impressive, if not brief.  Everything in Ionia is cinematic with every scene in the game being accompanied by a matching soundtrack.  Sound effects are all on point as is the voice acting with some nice ambient 3D audio that adds to the wonder in your surroundings giving the game an overall, almost, AAA quality presentation. 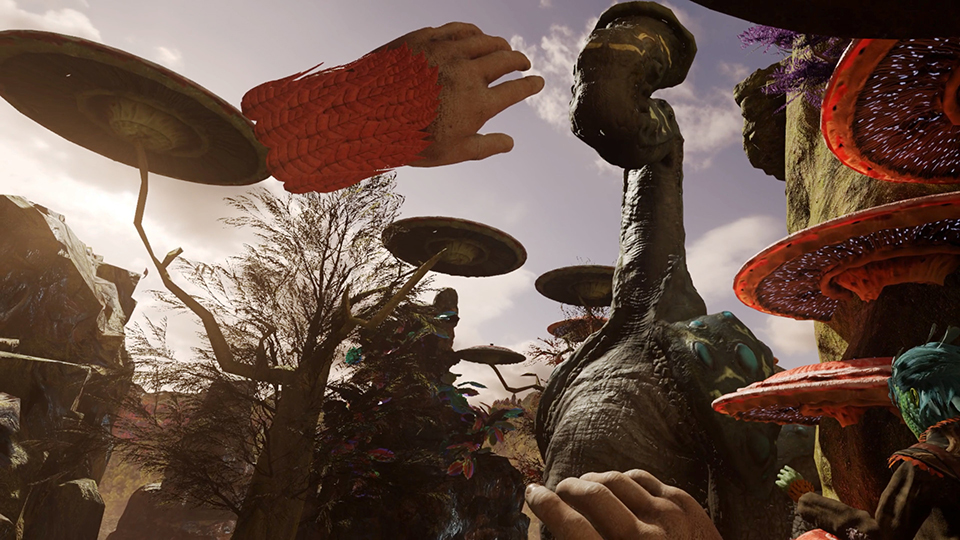 There are some massive creatures to interact with.

I enjoyed my time with ROTU and while there is much more coming thanks to 6 different chapters, we have seen many times in VR’s history that subsequent chapters aren’t always a guarantee, and this 1st chapter feels rather light, with the larger story being touched upon, but feels largely unexplored.  That in itself isn’t a knock against the game but when combined with my other issues just makes this feels like a quick, sometimes frustrating dip, into a very good looking world.  Standard options for seated play and smooth turning are absent and even with smooth locomotion on, if I ever walked into a higher transition in the environment, I walked through it, forcing me to back up and teleport on to it, lest I walk through geometry.  That took little more than a mental adjustment to adapt, but locomotion in VR is one of the most important aspects to immersion and it feels so undercooked here and that hurts the overall game.  Don’t get me wrong, this feels like a solid beginning to a much grander story and has some truly cool VR moments but at times it feels less like a game and more like an experience and that might just not be for everyone.

ROTU Ionia delivers on the developers promise of “push(ing) the limits of PC VR” when it comes to presentation, but falters in game design and lacking comfort options that really do hurt this 1st chapter.  As more chapters are released, this should alleviate my issues with the narrative, but at the time of this review, this feels more like an experience with gaming elements than a fully realized VR game which makes this difficult to recommend for the asking price… at least until we some more content in this series.

What would I pay?  This is $15 US and I think that’s just too much for what’s currently offered.  With around 45 minutes of game time including a bunch of cut scenes, it feels like it’s over almost as soon as it starts.  As this is the 1st episode in a series and no word if/when more chapters will be released, a price of $5 to 10 seems more apt, especially when you factor in the issues I mentioned above.

ROTU Entertainment provided The VR Grid with a press code for this title and, regardless of this review, we thank them for that!