Have you ever wondered what it was like to be a huge orc, lumbering across the landscape killing any creatures that get on your way…all to a sick beat?!  Well now you can in Drums of War where you take on said roll, armed with drums used to attack the dwarven horde you are out destroy along with anything else that gets in your way. 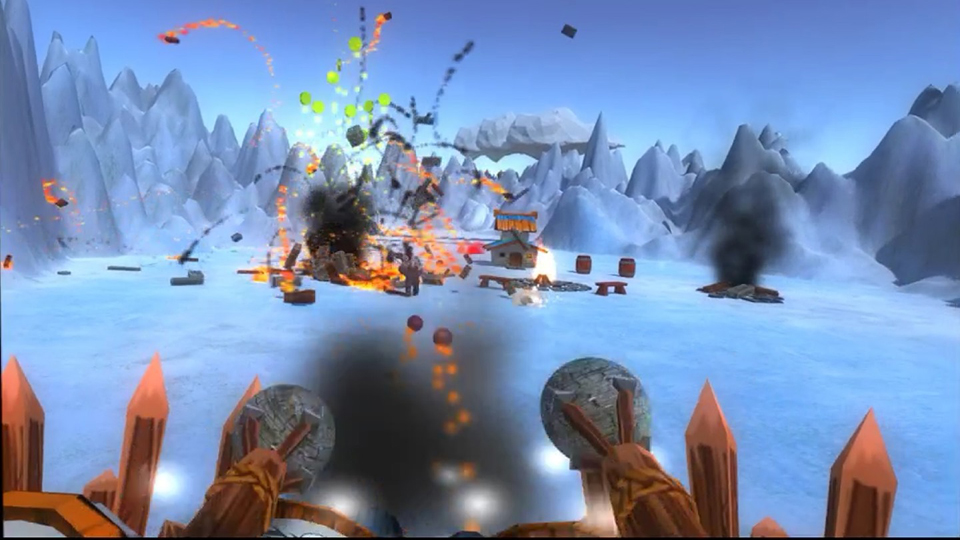 The controls here are unique, or at least the way they are implemented is as to do anything in the game you must hit a specific drum in front of you and to your sides.  The 2 center drums fire canons when hit, while the 2 middle ones are used to turn if hit individually and walk if hit one after the other and the 2 outer drums used to strafe left or right.  Additionally, you can use your drumsticks as a long-distance attack, striking them together as if they were matches, to throw some arcing fireballs.  A brief tutorial lets you figure out these mechanics and while they are fairly simple, it will take time to wrap your head around them.  From there you can play through the 15-stage campaign which will take at least 2 hours to get through and probably longer then that when you hit those challenging stages.  Throughout the campaign you accrue loot and the skulls of your victims with the former needed to buy upgrades and the latter needed to unlock additional game modes.  Those additional game modes include Wardrum Hero where you are stationary and must take out the dwarves coming toward you from all sides and see how long you can last.  The Random Dungeon Mode selects from 2 different settings, randomizing the enemies and obstacles you’ll face with Jukebox letting you enjoy the music and smash the drums without any goal or care.

Drums of war opts for a cartoonish aesthetic that fits the action nicely.  You’ll roam through 3 different worlds in the campaign; mountain ranges, a cavern system and hellish depths encountering a few fantastic creatures besides the vile dwarves including flaming skeletons and giant spiders.  The landscapes are flat, and the levels are typically very small though littered with explosives, obstacles and buildings with the overall quality of the visuals definitely looking on the budget side.  Nothing in here looks bad though close inspection of any element showcases simple textures and minimal animations.  I don’t want to harp on that too much as the game looks perfectly fine for what it delivers and while it might not be visually impressive, I’m pretty sure it was never the developer’s intention to make a great looking game. 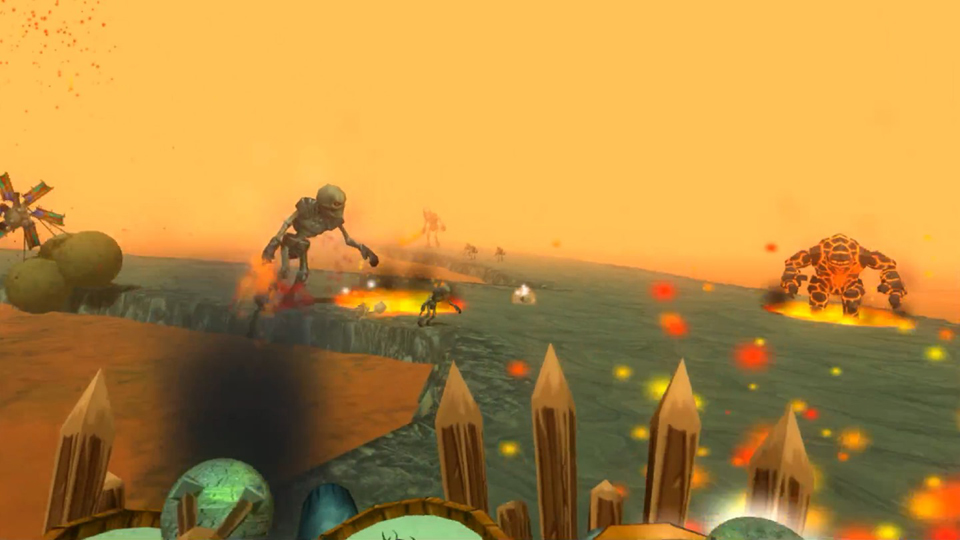 Now, where the game may be lacking in the eye-candy department, it is more then made up for by the audio which is fantastic.  The entirety of the soundtrack in here is of the heavy metal variety with sick guitar riffs and everything else amazing about metal as a genre.  It’s all too easy to fall into the beat while you traipse across the landscape and the game is so damned up tempo that it’s very easy to get into the dwarve killing mood.  I don’t know how many tracks are in here but they are original tracks from composer Gabe Castro as well some licensed tracks from the bands Warbringer and Exmortus.  This is the kind of soundtrack you just can’t help but bob your head too and is a highlight of this game.  The other effects in this game do the job, matching whatever is happening from barrels exploding, buildings crumbling and whatever enemies you face making their own noises.

Looking at the footage you may think the game mechanics are cumbersome… and they are, but that’s the point.  You are a giant lumbering orc and last time I checked, giant orcs weren’t known for their speed.  Moving to the beat is easy enough, but it’s the encounters where the true beast in this game rears its head.  The faster you hit the drums, the faster that action is performed and as the game gets steadily more difficult with some very challenging moments sprinkled into the campaign, your controls become an insane balance of movement and attacks.  I didn’t realize at the games onset just how physical this would be and once I hit the end of the 1st world, I realized my arms were in for a workout.  To quickly turn and strafe you can use both your drum sticks on 1 drum allowing for those fast actions, but when you are dodging enemy attacks while trying to protect your own rescued minions by taking down enemies who may be coming from multiple sides from spawn points you need to destroy, situations get very intense.  Thankfully, each stage is fairly small so starting over doesn’t feel too punishing and any loot you accrue throughout a stage goes to your stores ensuring that even you fail and fail again, you can still make progress towards purchasing buffs to aid your efforts.  The additional modes won’t take too much time to unlock save for the Hellscape mode which requires 666 skulls to access and full disclosure, I haven’t saved up enough to play that mode just yet.  The controls will frustrate at times, but health is hidden throughout each stage so paying close attention and learning from your mistakes will get you through the campaign.  The bonus modes are nice distractions though I focused on Random dungeon mode as the free mode held little interest and I found the Wardrum Hero mode to be very, very challenging and I just didn’t care for them, though I’m sure some people will. 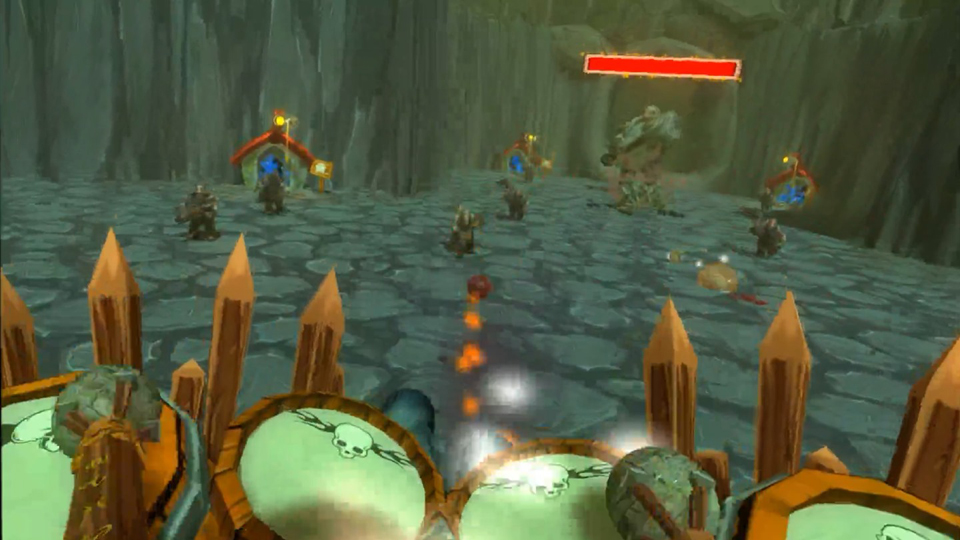 Difficulty spikes show up when you least expect them.

Drums of War is a unique title to say the least and the kick-ass soundtrack and gameplay turns this into a sort-of rhythm game though the emphasis in on the action.   Long plays and multiple deaths do make the game feel a little repetitive at times and when combined with the exhausting nature of the later stages, I did find myself needing breaks from the game.  Every time I put the headset back on though, I was instantly put back in the fantasy creature killing mood thanks to the guitar riffs and oddly fun mechanics.

What would I pay? This is totally worth the $15 asking price assuming you don’t hate heavy metal.  For everyone else this is a ton of fun, a surprising way to get a little physical and a great use of VR.

Grind Coore Games LLC provided The VR GRid with a pres code for this title and, regardless of this review, we thank them for that!