Deemo is, surprisingly, a franchise that made its debut on mobile devices well before VR was a thing and it has seen ports to the PS Vita and Switch consoles and now to VR headsets in the form of Deemo Reborn.  The story is odd, but simple and has you controlling a little girl in 3rd-person point and click variety after she has fallen down a deep hole and the only way out is to grow and climb a tree out the same hole she fell with the help of a being who’s piano playing tunes help the tree grow.  It’s worth mentioning that this is playable in or out of VR, but for the purposes of my content, I will only focus on the VR presentation and gameplay. 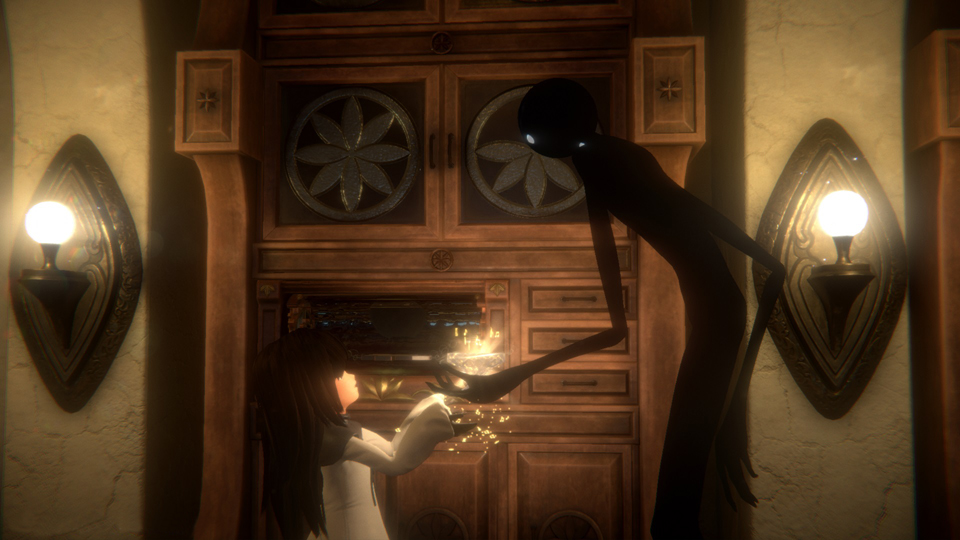 As stated, this is a point and click adventure in VR with you becoming nothing more then a camera as you tell this little girl where to do and what to touch.  Some rooms offer multiple camera angles to choose from which you will need to utilize to ensure you have uncovered all a room’s secrets. You’ll sometimes take the roll of the girl, putting yourself in 1st person mode as you solve a puzzle that requires a little more hands-on action.  Any items you pick up will be stored in your inventory and can be viewed at any time and thankfully, as long as you are carrying a needed item, interacting with whatever that object is supposed to go with, automatically uses the item making the mundane task of trial and error and navigating the menus easy.  The puzzles are more then just item finding as you must move items into a proper series, play notes in specific orders, move ballasts and a lot more giving some nice variety to the tasks you’ll be performing.  All of this is needed to find sheets of music for Deemo to play on a piano, which also pushes along the plot.  In piano mode, you now have 2 black elongated hands and must hit the keys in front of you as musical notes move toward you in traditional guitar hero fashion.  There are only 4 lines in which these notes travel at you, but depending upon the difficulty of the song you choose, each song has easy and hard modes, the notes can come at you at a slow or frenetic pace and you are graded at the end of each song based upon how perfect your timing was and how many notes in a row you hit.  Each song, once completed accurately, helps the tree grow and whenever you have played through enough songs, the game will force you back to the tree to watch a quick cut-scene of the tree growing.  The 3rd person puzzling and piano playing are balanced wonderfully in this game and whenever you spend too much time doing one or the other, switching to the other task will typically reveal new ways to progress the narrative. 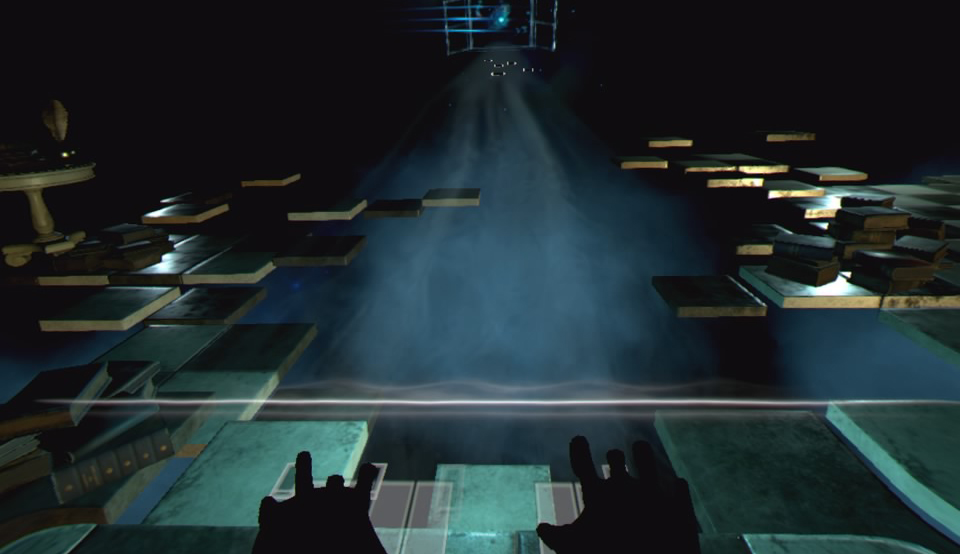 Deemo’s presentation carries with it a wonderful sense of polish and whimsical charm with every area you visit showcasing a wonderful attention to detail.  You are effectively in a giant treehouse with walls made of natural growing wood though each room you unlock and find yourself in delivers new settings.  From the central room where your tree grows to a small library or cavernous room lined with organs every new discovery offers something unique to explore and unravel.  Everything from leaves falling into water, or the subtle changes in light as you turn off lamps all add a little life to each fantastic setting you find yourself in.  When you decide to play some tunes, you become Deemo, a silent, tall and skinny black being reminiscent of Slender man, complete with long fingers and a piano at your fingertips. A masked girl dressed all in white also shows up soon enough though her motives are a mystery as she takes an interest in your activities.   You’ll find a few different pianos throughout the 10+ hour campaign each with their unique and surreal backgrounds which also helps in keeping the game feeling a little fresh.

Deemo’s largest achievement has to be the audio as there is a lot to appreciate here.  The main story is told in Japanese with subtitles and the performances are all fine if not a bit wispy.  The star of the show is the musical scores you’ll play on the piano and they come in a rather large variety with over 60 tracks to find.  They aren’t all winners with the notably bad standouts being a few of the vocal tracks which can sound particularly off when the lyrics are in English as it’s clear that the singers do not speak it fluently.  Beyond that minor annoyance though is a plethora of melodic piano tracks, some containing more jazzier beats to classical scores, dubstep and a ton more and while I definitely did not like every track put before me, I did appreciate the variety between them and the amount of tracks in the game.  I didn’t play any of the additional tracks but it should be noted there are many available through paid DLC. 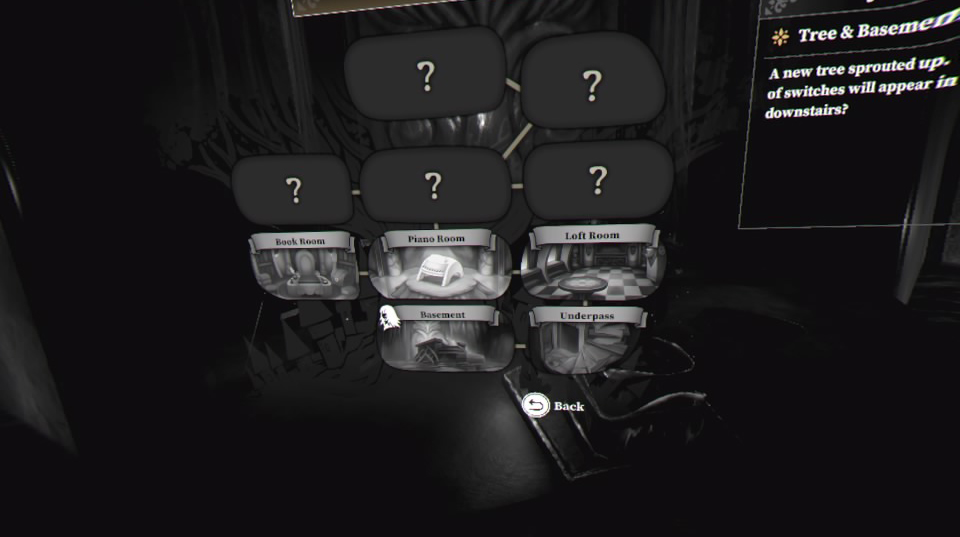 Deemo is not a game I expected to like, or rather it’s not a game I expected to like this much.  Even my initial hour in the game didn’t really impress me too much with only 2 rooms to visit and a few songs to play.  Getting used to the timing on the songs is trickier than it initially appears though I found with practice I did get better.  Each song’s 2 difficulties are further broken up by a rating indicating just how easy or hard they are, with some overlap when you compare the easy tracks to the very difficult ones.  Mystery surrounds the story and while hints and clues are spread throughout the campaign, the meaning behind Deemo, the tree and the girl in white won’t be revealed until the games final moments.  It’s a storied tale that does move at a slower pace then many other games, but the balance between the puzzles and music sections along with the great attention to detail and overall charm has me finding way more to love here then dislike.  The piano playing can be a tad finicky causing me to miss notes I swear I hit or accidentally hitting notes to early due the less then stellar tracking offered by the move controllers.  Thankfully, the game doesn’t punish those who can’t get ‘perfect’ on either song allowing for a fair bit of error.  The game length does feel slightly extended thanks to each song’s 2 difficulties as those separate difficulties count as individual tracks needed to be played to help the tree grow, but this is also a minor complaint at best. 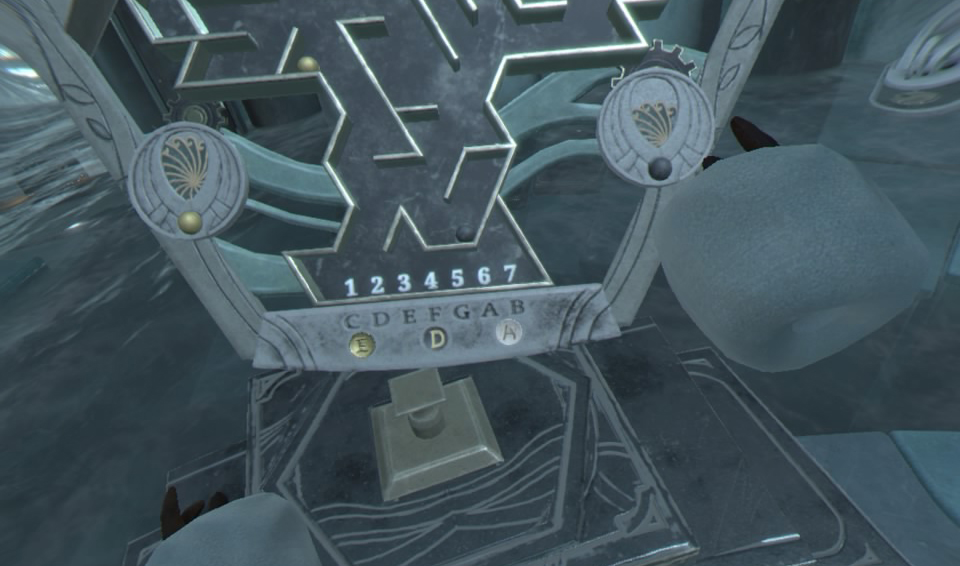 Puzzles come in all shapes and sizes.

Deemo Reborn is a fantastic puzzler centered around music with an in-depth story and great presentation.  The pace may be a slow one to some, but I continued through the campaign at a steady pace and appreciated the way the story was told.  The puzzles range from the simple to complicated with many relying on your auditory skills, having to repeat small music numbers by identifying matching notes.  The piano stuff is also quite fun once you fall into a rhythm and figure out your timing and jumping back between these 2 modes kept longer plays feeling quite fresh.  This won’t be for everyone, but if you’re not adverse to the rhythm genre and like some brain teasers, this is one heck of package and a must play in the PSVR headset.

What would I pay?  This is $40 and well worth it.  Lot’s of songs to play through, puzzles to solve, rooms to discover as an over-arching story that is engrossing.  It’s really hard to ask for more from a game like this.

Unties/SMEJ provided The VR Grid with a press code for this title and, regardless of this review, we thank them for that!