Man oh man, there has been some hype for this.  Since getting into VR I had seen a few videos featuring people absolutely losing their minds at how scary this experience was.  I try not to get excited over most games and typically avoid hype, but this one was unavoidable as it’s been talked about for months and months, promising tonnes of scares and creepiness and in some ways it does deliver, but in many others it falls flat. 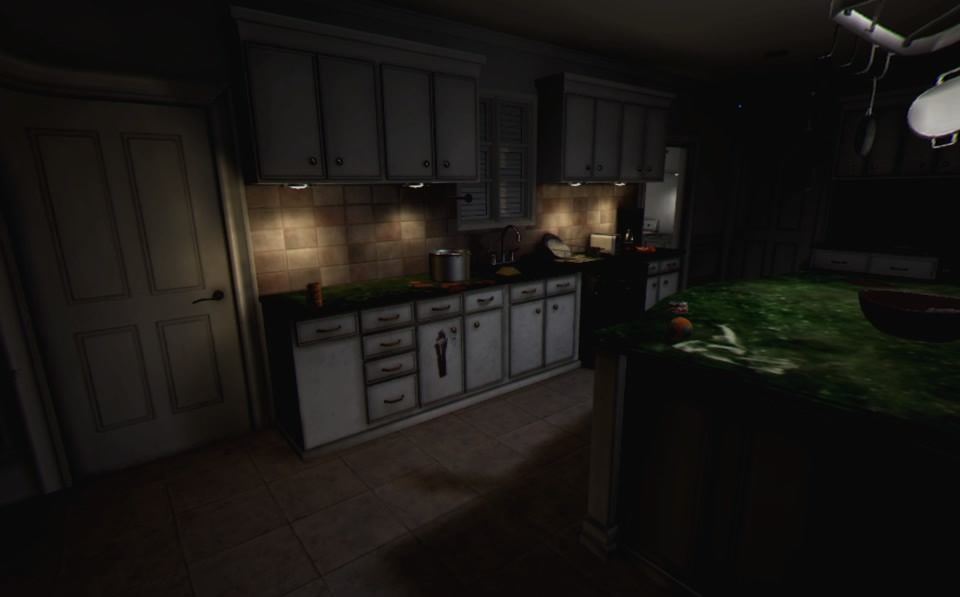 The house does have a very creepy, lived in vibe.

Requiring 2 move controllers, this game does move right by utilizing every single button on both remotes for multiple purposes.  You can set your main hand to move you forward and backward, while your secondary hand controls your turns and ducking.  Both controllers control item selection so you can use whichever hand you want to hold whatever is available and leave the other to open doors and drawers.  It’s system that works well, and though I did struggle throughout my playthrough with the button placements, I still appreciated their application and full use, considering the Move controllers limitations.  My one main gripe with the motion system in place is the pie-chart turning used.  It’s the only option available for turning and it makes for a tedious play with the lack of full motion being noticeably absent.  This turning method forced me to walk forward and backward in front of doors just so I could open and close them properly.  The lack of a free turn option in a first-person VR game is just ridiculous at this point and needs to be included in a future update.

As this is based on the movie franchise of the same name, this plays out very…VERY similar to it’s cinematic counterparts.  What I mean by that is there is an incredibly long drawn out beginning, a few jump scares in the middle and a somewhat convoluted ending(full disclosure, I did not get the alternate ending).  I think the devs tout the game’s length at around 2 and half hours, which matches my game time.  The problem with this is how much time you’ll spend backtracking, checking doors and opening drawers.

This game (which I will now call PAVR) seems to have somewhat of an identity crisis.  The horror elements and jump scares are here, but it feels like they went with a ‘less is more’ mentality and just didn’t include enough of them. Instead, you’ll spend soooooooo much of your time checking every door you come across to see if they are unlocked, and every drawer you see in the hopes they might contain a needed item…they almost never do.   The plot here is crazy linear so while some doors can be opened whenever, most require keys, or plot developments to occur before they can be.  Drawers offer up a similar experience as while many can be opened, many more cannot and it’s hard to tell which is which.  What makes this worse is that you may occasionally find an item in these drawers, thus forcing you to try every one lest you miss something.  As I progressed I was able to identify the drawers I could open, but it wasn’t a guarantee.  Early on you come across a fridge, which you can open and find nothing…ok, whatever.  Another fridge shows up later and cannot be opened at all, for no other reason than just because; very frustrating. 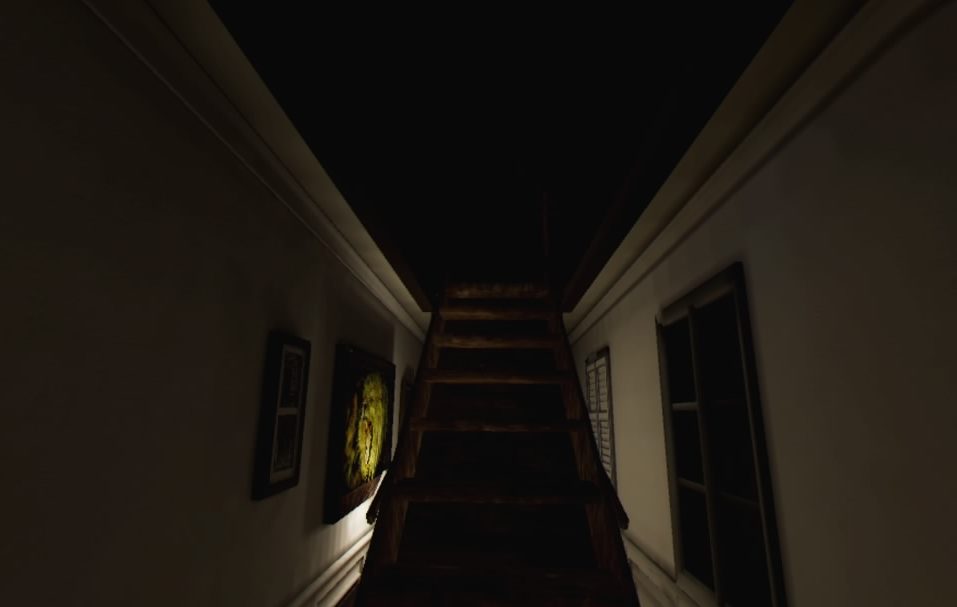 Of course I gotta go into the damned attic…NOTHING GOOD EVER CAME FROM THE ATTIC!!!

PAVR looks alright, at first glance.  The claustrophobic house feels lived in and all the rooms and hallways feel authentic.  Unfortunately, immersion is almost immediately broken by your hands when, even when holding objects, they pass through every piece of scenery in the game and though this is typical of many VR games, I felt a better collision detection system would have made this a little more realistic.  Many, but not all, objects can be picked up and looked at,and once again, you can’t always tell which is which.  The dumb thing is it doesn’t matter and unless you are hunting for a plot specific item, everything else is inconsequential.  It felt to me like the ambition was to make everything manipulatable, but realizing how daunting of task that was, stripped it back to being almost irrelevant.  The character models look alright and the *spoiler alert* ghost looks creepy, until its final appearance anyways.  There are some extra eerie moments as the secrets of the house are discovered and some cool “scare” moments that work great in VR, but like I said before, they are just to few and far between.  I also played on max brightness and still found the game to be a tad to dark.  I had to quit and check YT for a solution when I got stuck and couldn’t figure out what to do and as it turns out, I missed a book that was dropped into a shadow and I couldn’t see it without the aid of flashlight, which I never used in that area.

The narrative works, but also like the movies, suffers from a lack of development and some confusing reveals and plot points.  Doors creak and slam shut and other freaky phenomenon happen around making the audio effects one of the biggest highlights of the game.  It sounds unnerving and it should go without saying that headphones are a must.

This is a fetch questers dream as every single advancement in the game needs a key or other item to be activated.  Notes and tapes, for a tape recorder found later in the game, can be found throughout the game with some offering backstory on the house’s residents and others being plot related.  There aren’t really any puzzles here, just find stuff and proceed.  Your trusty flashlight needs batteries which can be found everywhere in the house (and are your main motivation for searching EVERY drawer).  The aforementioned book offers up clues to some barriers encountered and a lighter picked up later on puts off so little light it’s next to pointless, but does add to the creep factor.  The amount of batteries found seemed excessive as I picked up way more than I used, making my drawer searching all the more pointless and my lack of light use equally so. 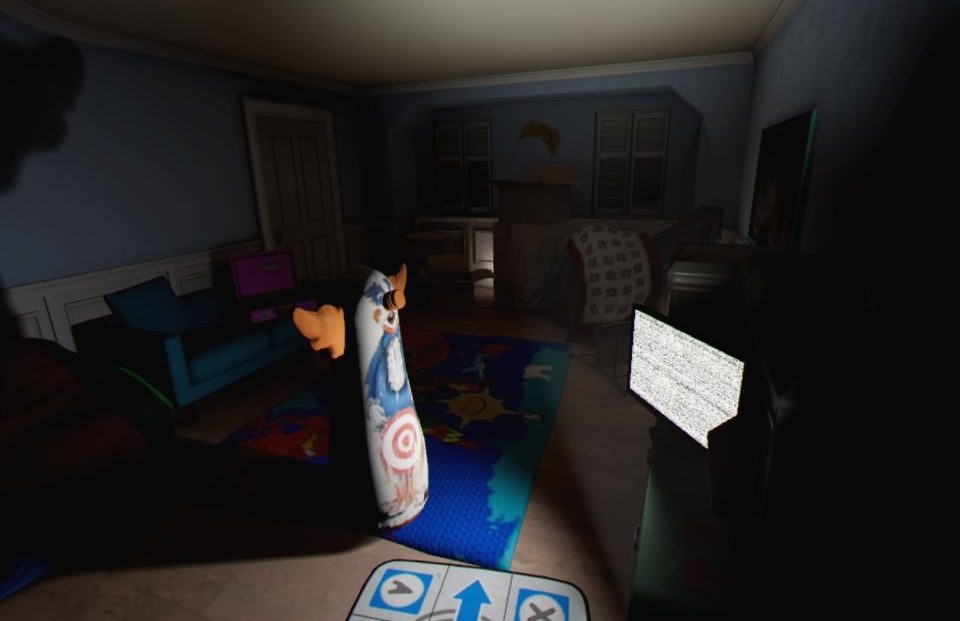 There are some really creepy scenes in here, it just takes some time to get to them.

This feels like a 1.5hr game extended by some monotonous gameplay.  The pacing can be erratic at times and while speed runs can be completed in less than half hour(not how the game should be enjoyed), I think most first timers will take around the 2.5 hours, with that extra hour spent wandering the halls, aimlessly searching for open doors and drawers.  A blacklight found later on adds an extra creep factor and when TV’s display a feed from another room, on a loop, it can both freaky and a helpful hint where to go next.  There is an alright horror game here, but the choices and options designed to extend the game feel like padding and slow down the experience to its detriment.

What would I pay?  $25 would be as high as I would go.  This has strong horror base for sure but the amount of time you spend not pushing the story forward takes away from the scary, creepy atmosphere and, when coupled with the confusing plot and limited replayability, the full price just seem high.

VWERX provided theVRgrid with a review copy of this game and, regardless of this review, we thank them for that!